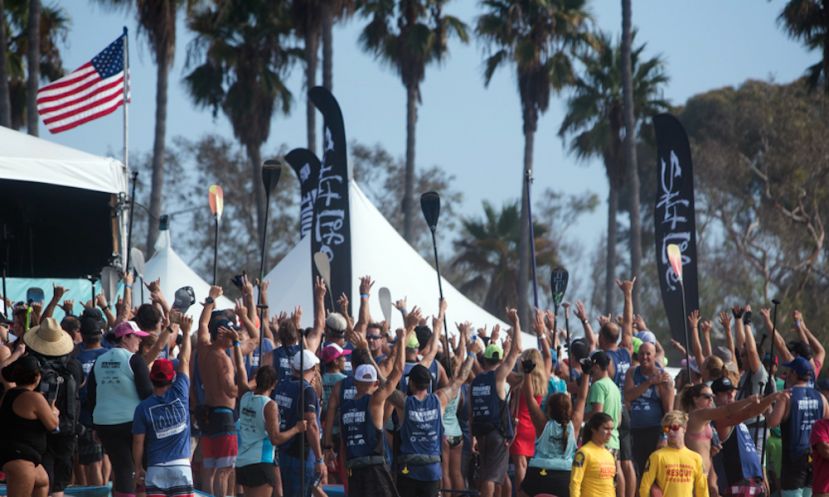 DANA POINT, California – Cloudy skies gave way to brilliant sunshine as Day Two of the Pacific Paddles Games presented by Salt Life got underway Saturday morning. With Youth, Open, Pro Junior and Pro racers all hitting the water, it was a jam-packed day of paddling action at Doheny State Beach.

Upsets came early and often with talented Italian paddler Leonard Nika (Starboard) coming up one spot short during a beach sprint in the first quarterfinal heat and Paolo Marconi, Bullet Obra and Fernando Stalla all getting knocked out in the following heat. Marconi lost his board 50 yards from shore and despite his best attempts to swim in, 17-year-old Noa Hopper took advantage of the opportunity claiming the final qualifying position to advance. Kelly Margetts (SUP Think Tank), Chuck Glynn, Kenny Kaneko (SIC Maui) and Niuhiti Buillard were other notable names who failed to make it out of the Men’s Pro Technical quarterfinals. 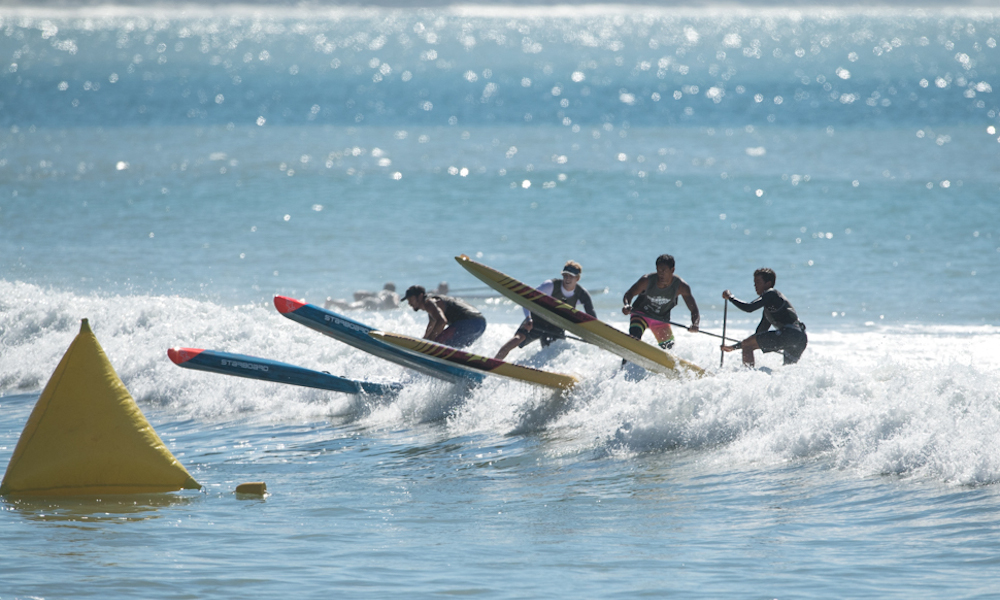 The Men’s semifinals had no shortage of surprises, and thrilling racing, that will undoubtedly add to the buzz ahead of tomorrow’s much-anticipated finals. In the first semi, star paddlers Connor Baxter (Starboard), Kai Lenny (Naish), and Travis Grant (NSP) swapped the lead several times before all catching the same wave to set up a dramatic foot race up the beach, a race Baxter’s long legs would win. Further back, the infamous “Hammer Buoy” wreaked havoc on several top paddlers, leading to both Zane Schweitzer (Starboard) and Titouan Puyo (NSP) being eliminated.

In the second Men’s semifinal heat, it was Mo Freitas who stole the show, handily winning the race and proving he’ll be looking to defend his crown from last year as the PPG Men’s Pro Technical champion. “I don’t feel any pressure, I’m just feeling pumped,” Freitas said following the race.

Other notable names getting knocked out in that race included Danish stud Casper Steinfath (Naish), with Trevor Tunnington and Toby Cracknell.

The ladies got their first taste of racing this afternoon, with Candice Appleby and Annabel Anderson dominating their respective semifinal races to set up a big matchup tomorrow. Other notable performances were turned in by Fiona Wylde (Starboard, Werner), hometown racer Shae Foudy and Frenchwoman Olivia Piana. Following the race, the two favorites shared their different mindsets for tomorrow’s race. 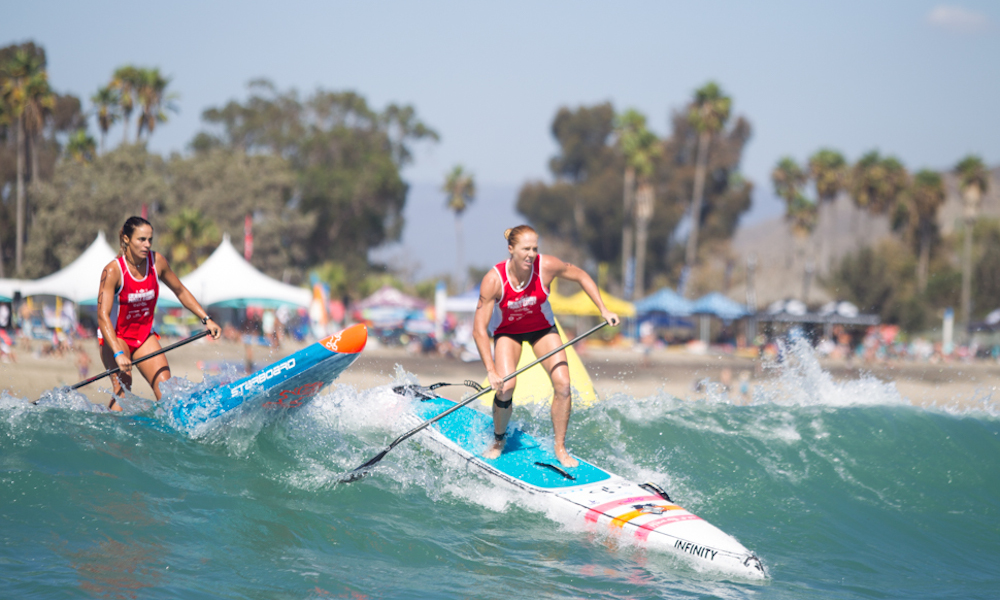 “That race definitely gives me confidence going into tomorrow,” Appleby said. “You’ve just got to go out there and do the best you can. Whether I’m first or last I’ll be happy for whoever wins.”

“I love that in surf racing you never know what to expect,” Anderson said. “It’s all about flow; you need to play it smart, play the waves and stay in tune with the ocean.”

In one of the most dramatic moments of the day, a large set knocked several Pro women off their boards as they desperately paddled towards the beach to claim the final qualifying spot in the first Women’s semi. After a thrilling sprint up the beach, it was Morgan Hoesterey who earned the final place in the finals.

Starting off the morning, the popular Junior races gave younger paddlers a chance to impress on the big stage. They didn’t disappoint. Kids as young as seven years old faced sizable waves, which would qualify as double-overhead for many of them, and handled them with skill. 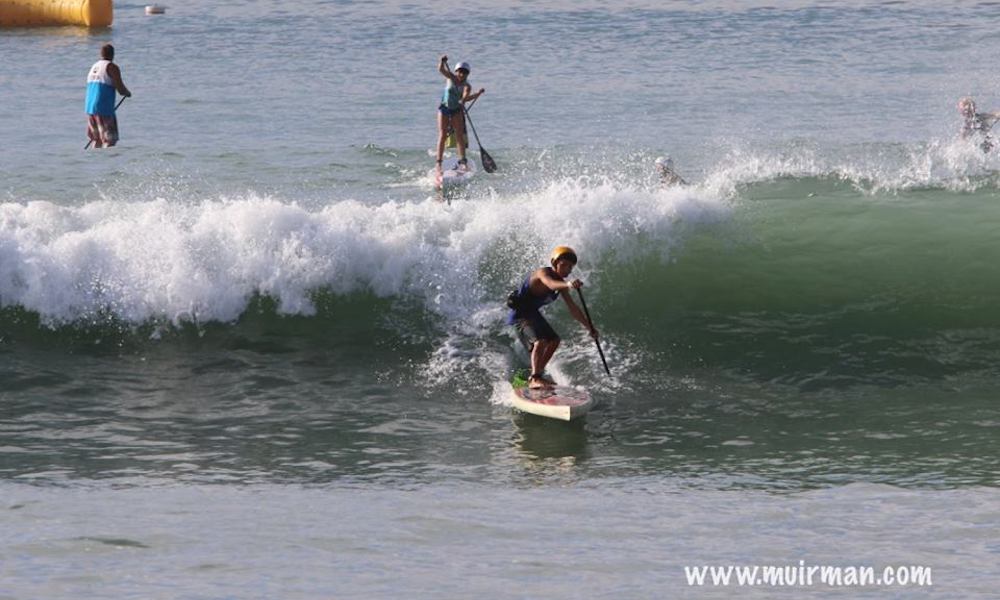 One of the great spectacles of the weekend was undoubtedly the Open Technical race with almost 200 men and women racing through pumping surf. The Men’s Open race started simultaneously as a head-high set rolled through, creating some interesting moments.

Amidst the wreckage, Lake Tahoe’s Jay Wild claimed victory in the Men’s race and Samantha Griffin winning the Women’s. But for most, simply competing in the sport’s crown jewel event was a memorable experience, evident by the buzz of excitement and camaraderie at the finish line after the race. 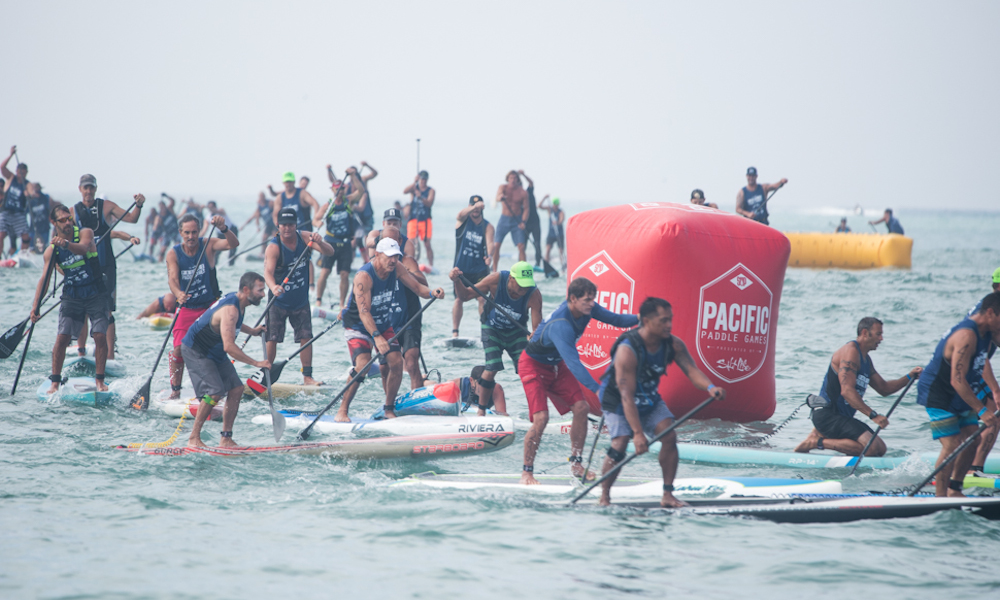 If talented groms signal the long-term strength of a sport, the Pro Junior races today should leave our industry very hopeful. In the Girl’s Pro Junior Technical race, 15-year-old Kali’a Alexiou held off a hard charging Jade Howson to win. In the Boy’s Pro Junior Technical race, Noa Hopper defeated French paddler Martin Vitry in a gripping finish. “The sport is growing so much and I’m thankful to be a part of it,” Hopper said. “Martin is a very talented athlete and it could have gone either way but I’m thankful to get the win.”

The stage is set for a dramatic final day of #PPG2016 with $60,000 and a year’s worth of bragging rights up for grabs. If you can’t join us at the beach, make sure to follow our Facebook page for up-to-the-minute updates and tune into the LIVE WEBCAST at ppg.supthemag.com starting at 8 AM PST!

Day One recap and results.