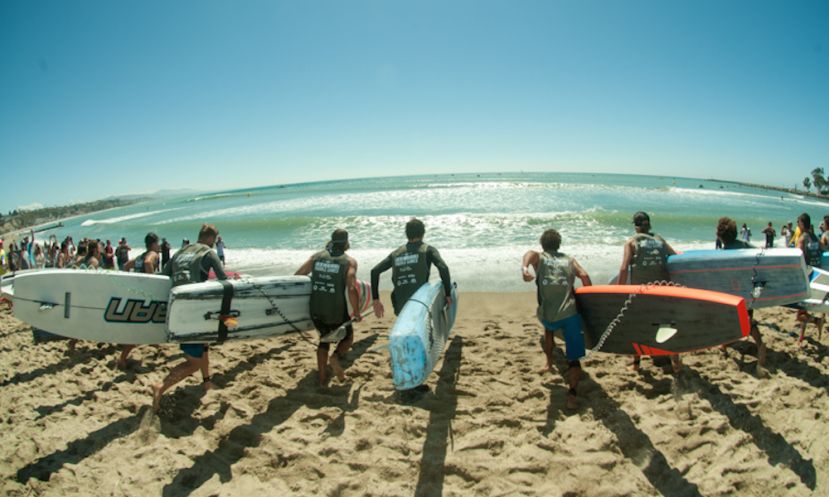 DANA POINT, California – Picturesque weather and a solid south swell greeted paddlers on Friday morning as the 2016 Pacific Paddle Games presented by Salt Life kicked off at Doheny State Beach. With a record-breaking prize purse of $60,000 up for grabs, anticipation levels were high as the world’s best paddlers began their quest for victory at standup paddling’s biggest race of the year.

Starting things off at #PPG2016 was arguably one of the most grueling events of the entire weekend – the six-mile Prone Distance races – with the Men’s and Women’s races going down at the same time.

In the men’s event, a three-man pack broke away from the field made up of 22-year-old Jack Bark and Australian powerhouses Matt Poole and Nick Malcolm. The trio was locked together until Poole made a charge to break away with just over a mile to go. After opening a gap, Poole was able to maintain a torrid pace on his way to becoming the first winner at #PPG2016. Malcolm made it in an Aussie top two, with Bark bringing it home in third.

“So stoked to win, but that was a really tough race,” Poole said following his win. “I just had one opportunity to stretch a gap but ended up having to work the whole way back and I was burning, but luckily I was able to hang on.”

In the Women’s distance race, it was Carter Graves claiming the victory with the battle for second place coming down to youth versus experience. Youth prevailed with 18-year-old Abby Brown getting the advantage over 50-year-old paddling inspiration, DJ O’Brien.

Later in the day, the Prone paddlers were in the spotlight once again with the Prone Technical races – a test of prone racers’ ability to handle their boards while paddling in and out of the pumping surf. The Men’s Prone Technical race was dominated by Matt Poole, who got two lead waves to put an exclamation point on a dominant day in defeating second-place finisher Jack Bark by 30 seconds. Rounding out the podium was fellow Aussie, Nick Malcolm. Carter Graves also made it a clean sweep, charging to victory in the Women’s Prone Technical race. “It was a lot of fun out there and am just stoked to get the win here at PPG,” Graves said.

A thrilling three-way battle for second place followed Graves to the beach. With Abby Brown and Marisa Kuiken riding a wave toward the beach, Izzi Gomez–competing in her first-ever prone race–came charging in from the far left to thrill the crowd and steal second.

“I just got lucky and caught a wave,” Gomez said. “Then I just paddled as fast as I could diagonally and it made for an exciting finish.”

Friday also featured some exciting standup paddling action with eight preliminary qualifying heats for the Men’s Pro Technical event. With the top eight paddlers advancing from each heat, the sport’s biggest names were all able to advance, but there were still plenty of thrilling moments.

The first heat of the day was stacked, with rivals Connor Baxter (Starboard) and Kai Lenny (Naish) going head-to-head in the opening minutes of the race, before Tahitian Lorenzo Bennett came away with a surprise victory. Other highlights included Travis Grant (NSP) claiming the fastest time of the day–14 minutes and 40 seconds and Frenchman Arthur Arutkin snagging a well-timed wave and going from fifth to first in heat two for what would eventually be a commanding win.

Mother Nature once again reminded the paddlers who’s boss with head-high waves causing several heavy wipeouts at the infamous “Hammer Buoy.” Getting the worst of it was Riggs Napoleon, whose leash got caught on the buoy following a wide wipeout. The ordeal would drop him from third to ninth place and cost him a chance to advance into tomorrow’s quarterfinal rounds.

Conditions are expected to remain ideal for the remainder of the weekend with only a slight drop in the surf. If you can’t make it to the beach, tune into the LIVE WEBCAST at ppg.supthemag.com starting at 11 AM PST! #PPG2016

More in this category: « Starboard SUP Moving Towards Sustainability Competition Heats Up On Day 2 At 2016 Pacific Paddle Games »