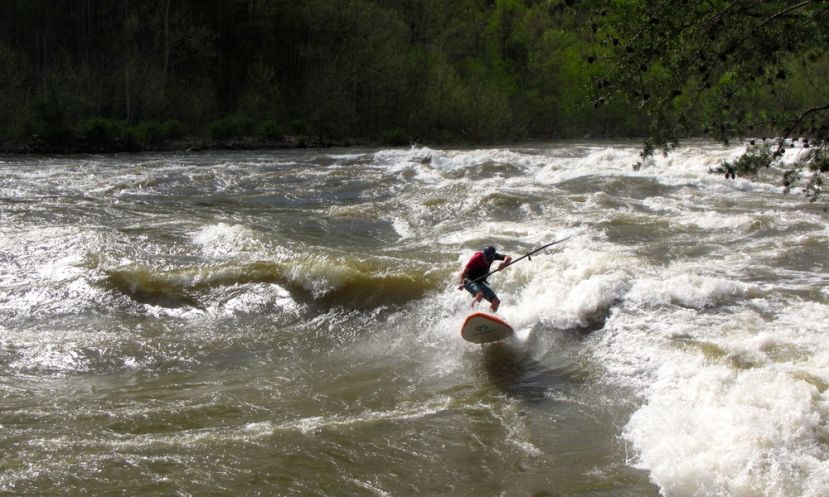 SAN DIEGO, California - Can you believe that 2015 has come and gone and we’re already paddling our way through 2016? 2015 saw tons of incredible videos featuring stand up paddle boarders from all over the world. We saw dolphins, whales, wipeouts, icebergs and more! Check out the Top 10 SUP videos of 2015…

If you’ve got anything newsworthy, weird or worth seeing, don’t be shy to share the scoop with us via e-mail.

Australian stand up paddler Jamien Hudson had an encounter while on his paddle board that many only dream of having. Hudson was joined by two beautiful whales for what looked like quite some time. This video has been getting quite a lot of traction and after watching you'll know exactly why.

Filmmaker Seth Haley released an incredible video of a Michigan paddler paddling among an iceberg ridden Lake Michigan. The visuals from this video are stunning. Take a look.

If not succeed, try and try again, right? That's what these river paddle boarders found out when paddle boarding down the rapids of the Chattooga River in North Carolina. Paddle boarders Trey Knight (C4 Waterman), Ben Moore (BIC SUP), Dave Hepp, Mitch Davis, Atilla Takats, and kayakers Austin Crane and Jacq Willis are seen in this short video created by Mitch Davis, having some awesome runs down the river along with an equal amount of wipeouts.

Stand up paddle boarding surfers Ryan Warrington and Kyle Tatam were paddling in the warm summer waters off of Perth, Australia's coast when they were surprised with the company of a small pod of dolphins.

In what can be described as an incredible experience to say the least, the dolphins began riding the waves alongside the surfers. Ryan Warrington said that it was "one of the most surreal days" he's ever had in the water. Warrington and Tatam were joined by a pod of dolphins for about an hour before parting ways. Check out the amazing video below.

The GoPro Mountain Games is one of the biggest events of the year so when the event finished, a few of the competitors, stayed behind in Glenwood to catch a few more at the Glenwood River Wave in Colorado. The team from Pau Hana was among those that stayed behind and in this video, watch Dane Jackson, Nick Troutman, Chuck Patterson and many others surf the Glenwood wave on Stand Up Paddle boards. Enjoy!

Florida is a place where you can paddle alongside anything from manatees, dolphins, sharks and of course, alligators. Alligators are members of the animal kingdom that can be pretty dangerous to be around. At the end of January 2015, Nick Halloran, (who we've reported on before for catching a massive cobia on his SUP) went paddle boarding with a few of his friends through Myakka State Park in Florida and they came across quite a few gators, getting pretty close at times. There is even one point in the video where there is an extremely close call and he almost gets knocked off his BOTE board by the gator.

There have been a number of mixed feelings that have been expressed upon seeing this video. Some saying that boundaries were crossed..Watch the video below and tell us what you think.

For years, pro riders Mike Tavares (Boardworks Surf), Luke Hopkins and shaper Zack Hughes have been conquering the ocean waters. Now, thanks to Onewheel, the Revolutionary Electric Boardsport, Tavares, Hopkins and Hughes are easily mastering the concrete, dirt and any terrain that comes their way.

2. Gargantuan Grouper Caught On Paddle Board

Captain Ben Chancey got the experience of a lifetime when he was able to reel in a gargantuan 7 foot long, 400 pound grouper off of his paddle board off the East Coast of Florida. While struggling to reel in the massive fish, Chancey was knocked off of his paddle board yet he still managed to keep hold of the rod and fight for the fish. After reeling in the grouper, Chancey took a couple of photos and released the fish back into the wild.

Earlier this month Matt Minich and Peter Nelson were paddle boarding and surfing in Hermosa Beach and Manhattan Beach, California when a dolphin surfing the waves didn't see Matt and gave him a body slam. Luckily, Matt got his GoPro out when he saw the dolphin coming in the wave. Fortunately no one was hurt.