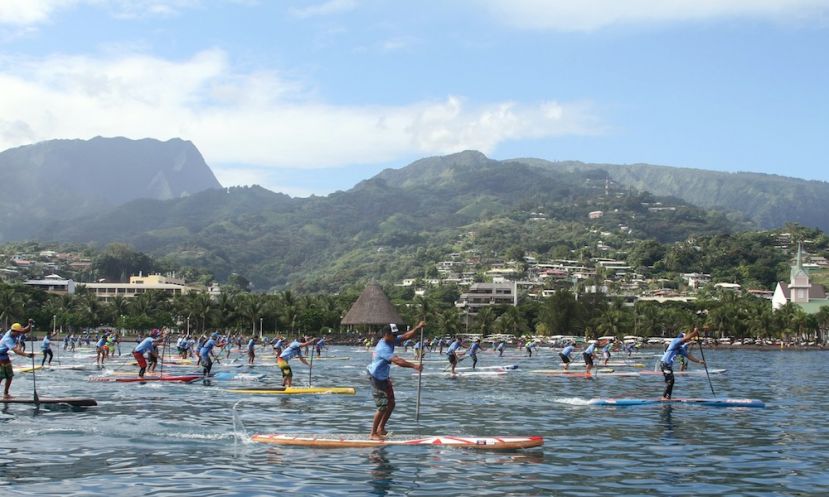 TAHITI, French Polynesia - Last weekend's Air France Paddle Festival in Tahiti saw record participation among locals and residents of Tahiti. In only it's second year, the Air France Paddle Festival is quickly becoming a major stand up paddle boarding event, not only in the South Pacific, but around the world having 280 registered participants. It was an insanely beautiful day for the event and not only were the beaches packed, but the ocean was filled with hundreds of racers that took part in the festival. Both elite athletes and amateur paddlers alike joined together and participated in what’s sure to become the South Pacific’s largest stand up paddling competition. 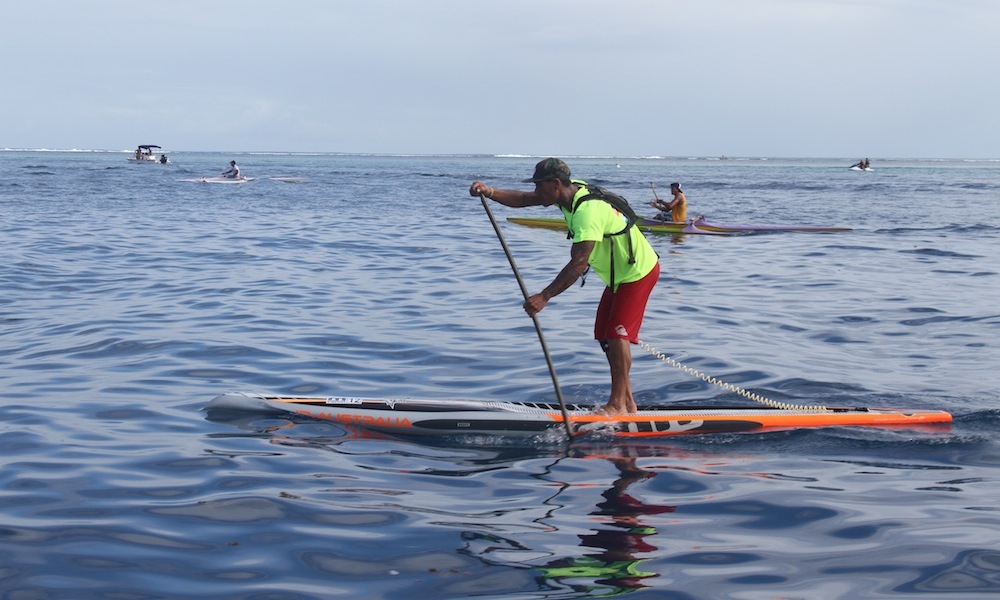 The morning started off with the 9.5km Lagoon race which took place in the heart of Papeete and led along through the lagoon in the pristine and beautiful blue-green waters all the way to the finish at Punaauia (Taapuna).

The winner of the 9.5km race was champion Vaa paddler Bruno Tauhiro. Tauhiro was in-form throughout the entire lagoon race and was closely followed by second place finisher Teva Poulain who was hot on his heels for a good portion of the race and in the end finished with less than one minute behind Tauhiro. Not far behind Tauhiro and Poulain, it was Eric Leou-on, and Tahitian SUP surf phenoem Poenaiki Raioha who finished in the third and forth places respectively.

In total, the lagoon race had 165 registered athletes and 131 participants who completed the race. It was awesome to see folks who have only recently introduced to stand up paddling and having them already compete and race in such an awesome event.

The 24km Elite Race started off with a downwind and then transitioned into a flatwater paddle. | Photos: Supconnect

The 24km Elite Race Course was tough to say the least. The race began at Mahina (Pointe Vénus) with a downwind paddle which was definitely "difficult to navigate on a flatwater race board" said Georges Cronsteadt. The race then led into the same course as the 9.5km Lagoon Course which allowed for the flatwater portion of the race up until the finish at Punaauia (Taapuna). 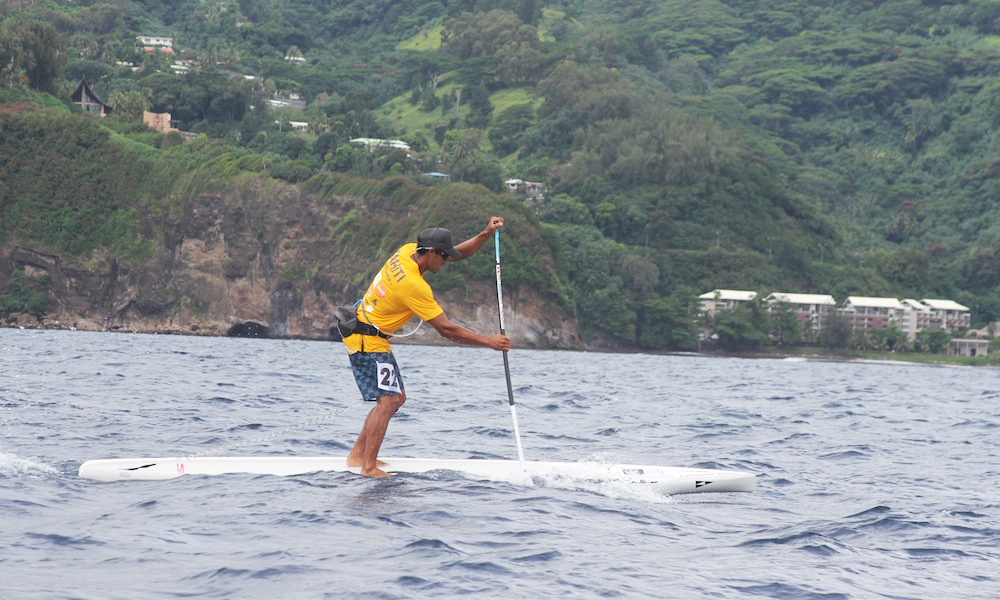 The competition was fierce between the athletes as Tahiti is known to breed some of the best paddlers in the world. That being said, it was no surprise that the Tahitian Beast himself, SIC Maui athlete Georges Cronsteadt, took home the victory after a solid showing and leading throughout the entire 24km Elite race course.

Close behind behind him throughout the majority of the race, it was young Tahitian Rete Ebb who challenged Cronsteadt for the top spot finishing behind him by less than one minute. Ebb looked strong throughout the entire race but was unable to catch Cronsteadt who was on fire and unstoppable. Another standout during the 24km race was Bruno Tauhiro who finished third on the podium behind Ebb and Cronsteadt and who also took top honors in the 9.5km race. Tauhiro was one of only a few athletes to participate in both the 9.5km and 24km races so to see him finish on podium for both races was quite impressive. 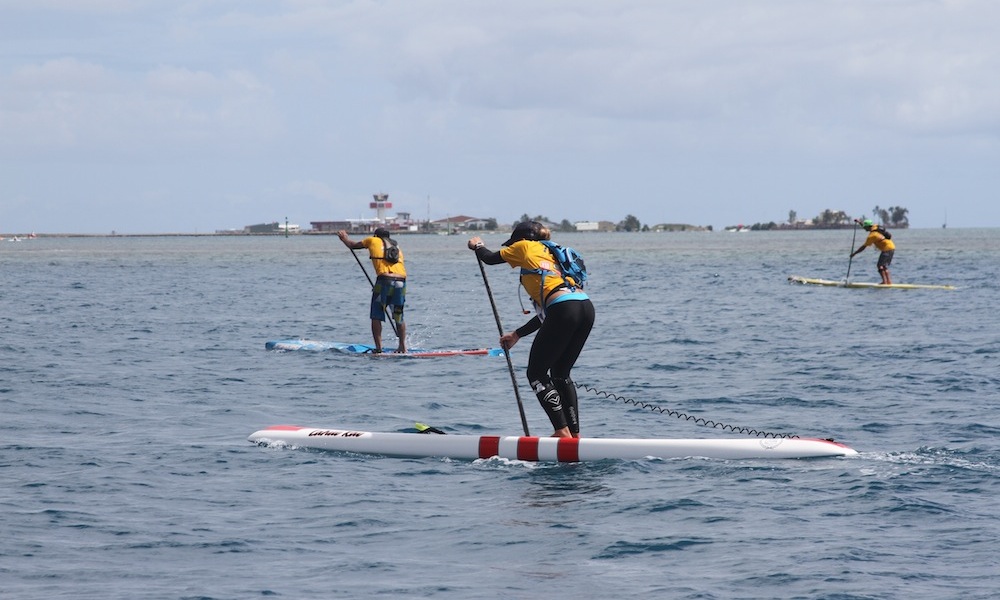 Despite being under the weather, Annabel Anderson was the first of the women to finish the 24km Elite Race. | Photo: Supconnect

On the Women’s side of things it was Kiwi Annabel Anderson to come out on top against some of Tahiti’s top female paddlers. "The girls here are some of the best paddlers in the world" said Annabel. "There's no doubt about it."

Annabel was in Tahiti for a quick trip and it wasn’t until a few days before the event that Annabel had decided to participate in the festival as she was coming off of a bad case of the flu. Annabel wasn’t at 100 percent, but it sure didn’t show as she came in looking strong and with a big smile on her face. Coming in second in the race was well-known female Tahitian paddler Hinatea Bernardino and behind her in third was Marguerite Temaiana. Temaiana was another standout paddler of the day who, like Bruno Tauhiro, participated in the Lagoon race earlier in the morning and was the first female to finish that race.

In total for the 24km Elite race, there were 72 registered competitors and 61 competitors who finished the challenging course. 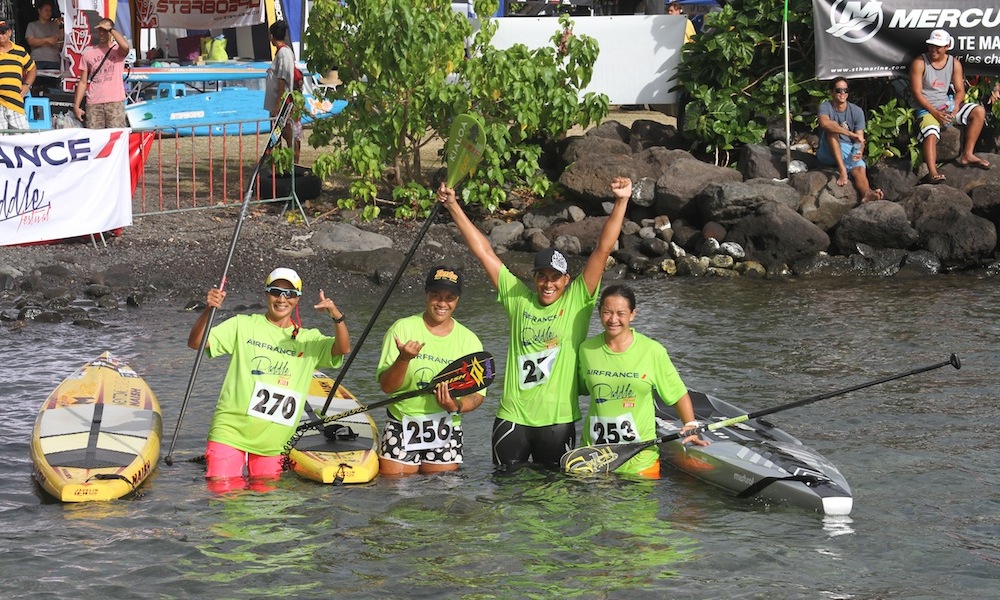 The Women's 500m Sprint racers. Hinatea (second from the right) winner of the Sprints. | Photo: Supconnect

The sprint races were also a blast and were the last of the races to take place in the day but were some of the most exiting. The crowds on the beach could be heard cheering loudly as they rooted on their favorite paddlers to win. The Men's Sprint saw Lorenzo Jr Bennett take the win followed by Poenaiki Raioha and Tauhiti Pifao in second and third.

The Women's Sprints saw standout Hinatea Bernardino take the win over Uraau Tani and Vaimiti Maoni. In the 18 and under Sprints, Révi Thon Sing came in ahead of Tiavairau Chang who placed second and Mauiki Raioha who came in third.

Overall, the Air France Paddle Festival was an more than just a stand up paddling racing event, it was a day for families and friends to come together and have a good time on the water. There were water slides for the kids to enjoy, tons of vendor booths to check out the latest and greatest products and even a SUP obstacle course that was a hit with everyone. The camaraderie between all the athletes was a highlight as all the athletes cheered each other on and congratulated each other once the races were complete. As Event Director Jerome Loisel stated, "We are so happy because it has been a very successful event. It is an event not only for racing but a festival where everyone can come and be happy and have fun."

It wasn't all racing at the event, there were tons of fun activites for everyone to enjoy! | Photo: Supconnect

The Air France Paddle Festival is an event that is sure to keep growing and will likely attract the attention of more and more international athletes in the years to come making it of the top SUP events to participate in alongside some of the most prestigious races in the world such as the Carolina Cup and the BOP.

Check out the full gallery from the Air France Paddle Festival below.

To see more SUP Events around the globe and near to you, check out the Supconnect Events Calendar. 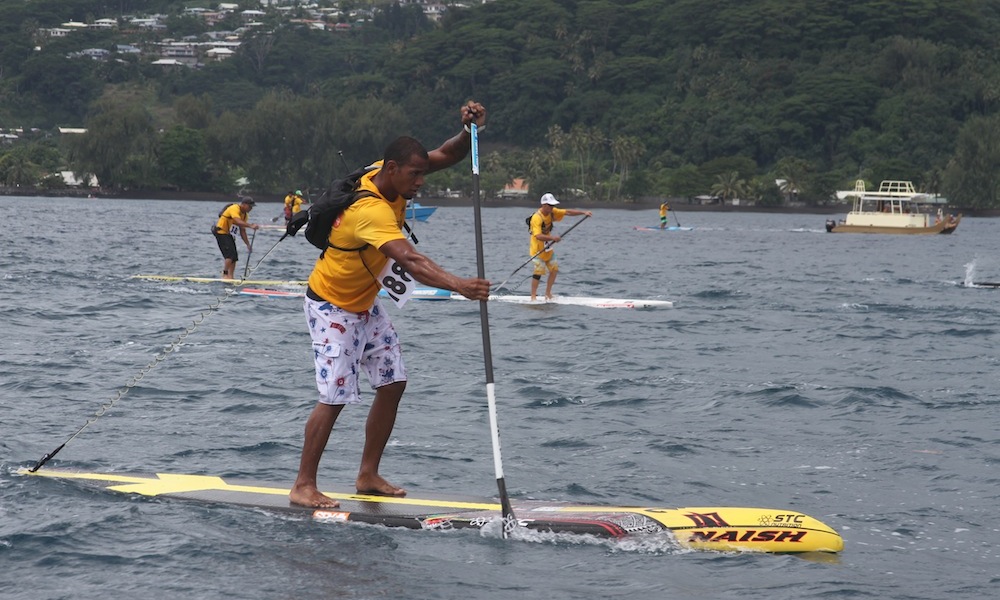