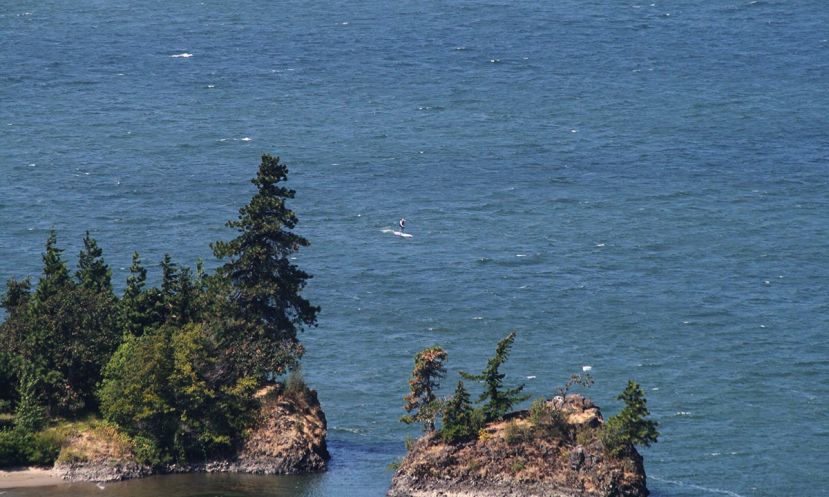 PORTLAND, Oregon - Following the tragic events that took the life of paddler Andres Pombo in the days leading up to the 2015 Naish Columbia Gorge Paddle Challenge, SUP athlete and enthusiast Brett Downen gives his take on why wearing a leash and a PFD on the Columbia Gorge is not only a good idea, but an absolute necessity. Read what he has to say below.

I am a SUP downwinder, a SUP racer, a SUP surfer, and have surfed for the past 31 years. Please know I speak from a lot of hands-on experience when I tell you to wear safety gear. I don’t just recommend it, I live it. The gist of the following ends up with a summary of important safety tips. I might as well start with those safety tips as well for those who don’t want to read the rest.

I personally use multiple nylon cords attaching the velcro strap to the leash plug instead of the typical single cord.

Not only will it give you extra floating time, they are designed to be bright for a very good reason, so we can see you. Which brings me to my next point.

Pretend you’re a surfer in the 80’s. Neon greens and pinks are still the style in the Gorge. Go bold, go bright, be spotted.

You need a paddle buddy in the Gorge. Always.

The Gorge is not just another water recreation destination, it’s an EXTREME destination. Supconnect recently ranked the Gorge the #3 downwinder in the world, which is a pretty good indication the Gorge is a little more intense than most SUP locations worldwide. Which is also why wearing a leash makes the most sense and wearing a PFD (Personal Flotation Device) is the law in the state of Oregon. Plus, it should just be a no-brainer. 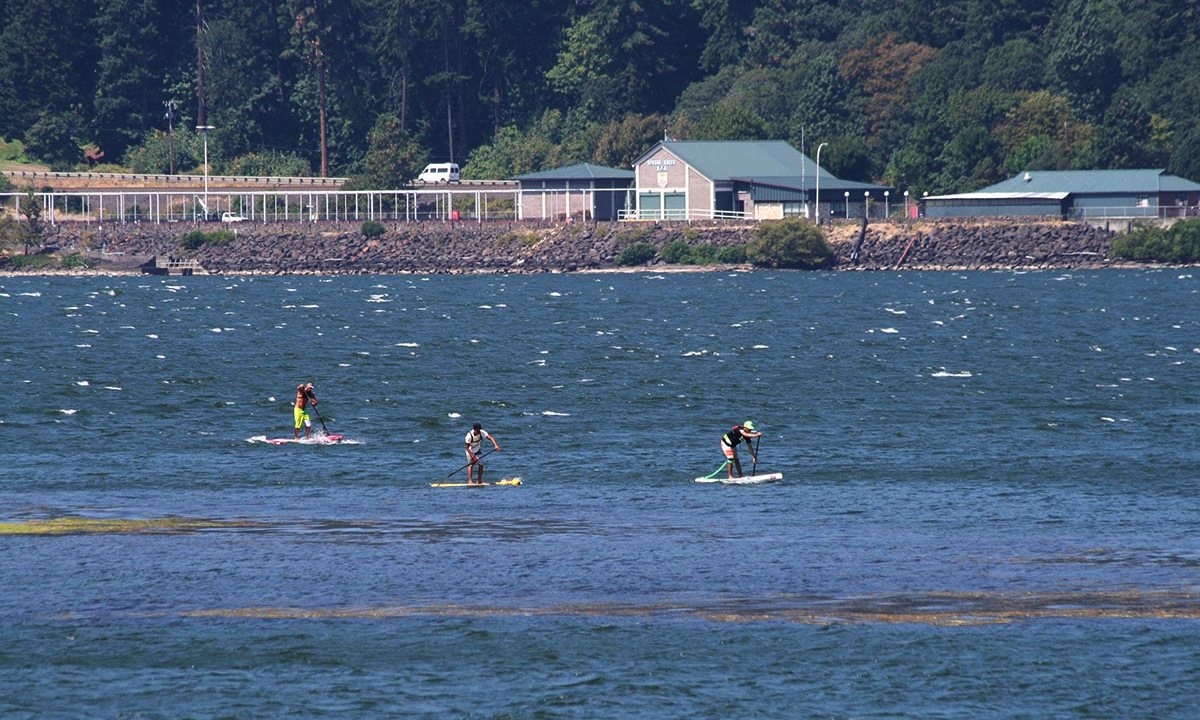 Look at it this way:

At a windspeed of 20mph, the surface of the river can actually achieve similar speeds, which is how the swells are formed in the Columbia River. This is only near the surface though and the river speed quickly slows, then reverses to its natural down flow speed (assuming westerly winds in the Gorge), just below the surface. An average river speed is roughly 1mph this time of year (summer).

So, let’s say you are not wearing a leash and you fall off your board. The board, which is at surface depth, is going to immediately jettison first in the direction of the wind and at roughly the same speed (20mph). You, on the other hand, have fallen and your dense structure rests mostly beneath the surface, so is more affected by the flow of the river and less so by the air and water surface speed (~1mph). Your board, in 1 second, is potentially 31 feet away.

OK, so let’s throw in surface tension from the board because that would potentially slow the board down a little, right? So let’s say that due to surface tension, the board is actually going half the speed of the surface current. That would mean your board is traveling with the wind at 14.7 ft/sec while you are still now affected by the river current in the opposite direction at 1mph. So your board is traveling away from you at 16 ft/sec.

Now, throw in the possibility that once you were ejected from your board, it got caught up in the wind for 2 seconds. Yes, this is 100% possible and I see it almost every time I’m down winding in the Gorge. In 20mph wind, the board just traveled 30-60 feet away. That’s a gap you need to cover and you have barely surfaced from your fall! Oh, and where is your paddle? If you’re swimming with the paddle in one hand, you’re in trouble because you will NEVER get to your board (and nobody likes to ditch a $400 paddle!).

Even if your board wasn’t caught up in the wind, you need at least three seconds to recover and locate your board. Even if all the above calculations are exaggerated (they’re not), a board caught up in the same swells as you are battling, is not sitting idly by your side, it’s a fast moving object getting further from you and your dense body by the second. 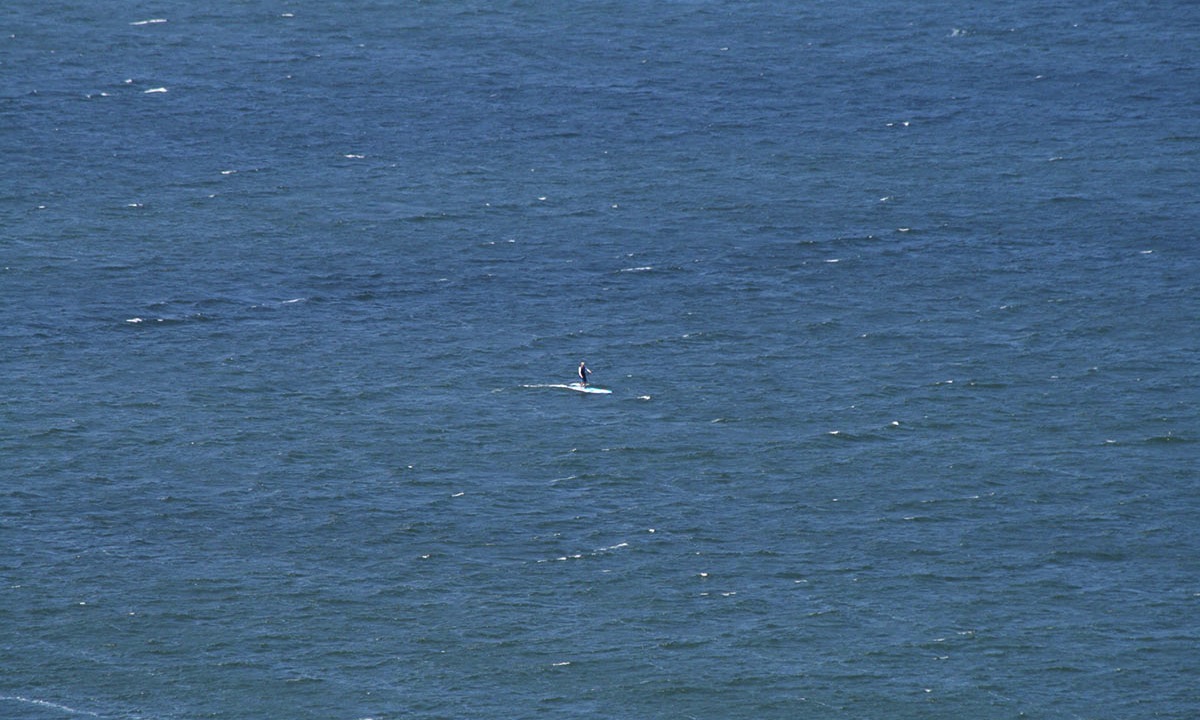 It's a big river out there, bring safety equipment! Photo: Big Winds

Keep in mind the above scenario has yet to take into account the three-foot swells passing by every 6-8 seconds, which you are attempting to swim through while still maintaining a clear airway and a non-panicked mental state. I can guarantee you that a clear airway and a clear state of mind is a lofty goal when you’re in the middle of a one-mile-wide river while 20mph winds are whipping up the river into a frenzy of chop and spray.

Where is all of this going? It’s simple: without giving yourself at least a chance to recover your board, you’re a free swimmer trying to survive. Wear a leash!

What are your thoughts on using a PFD and/or a leash? Should they be forced in by law? Let us know your point of view in the comments below!

Interested in writing an Opinion Piece? Email our editor your idea!

Brett is a family man and working stiff who also happens to spend as much time on the water as possible. A lifelong surfer and now paddleboarder, his growing collection of boards has made him consider opening a board rental business out of his garage. Brett lives in Portland, Oregon and considers all bodies of water, from the Pacific Ocean to the Columbia River Gorge and all lakes and rivers in between, his playground. You’ll find his latest SUP adventures and a list of Northwest destinations on his website dedicated to SUPing around Portland at suppdx.com.