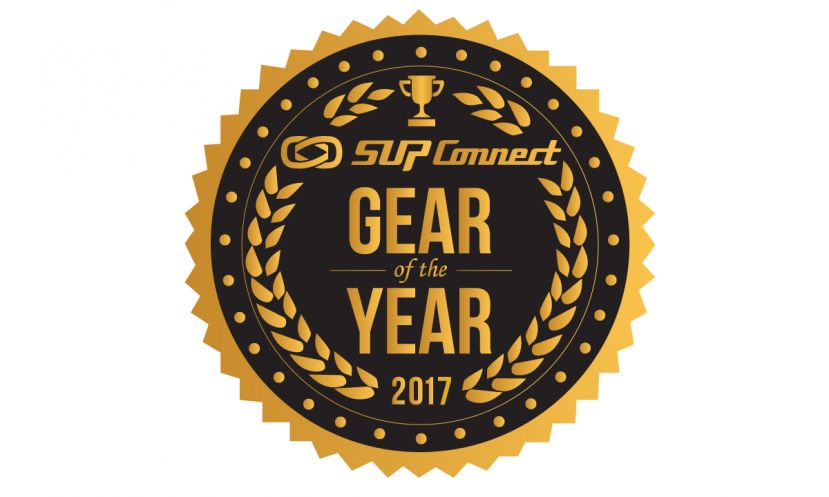 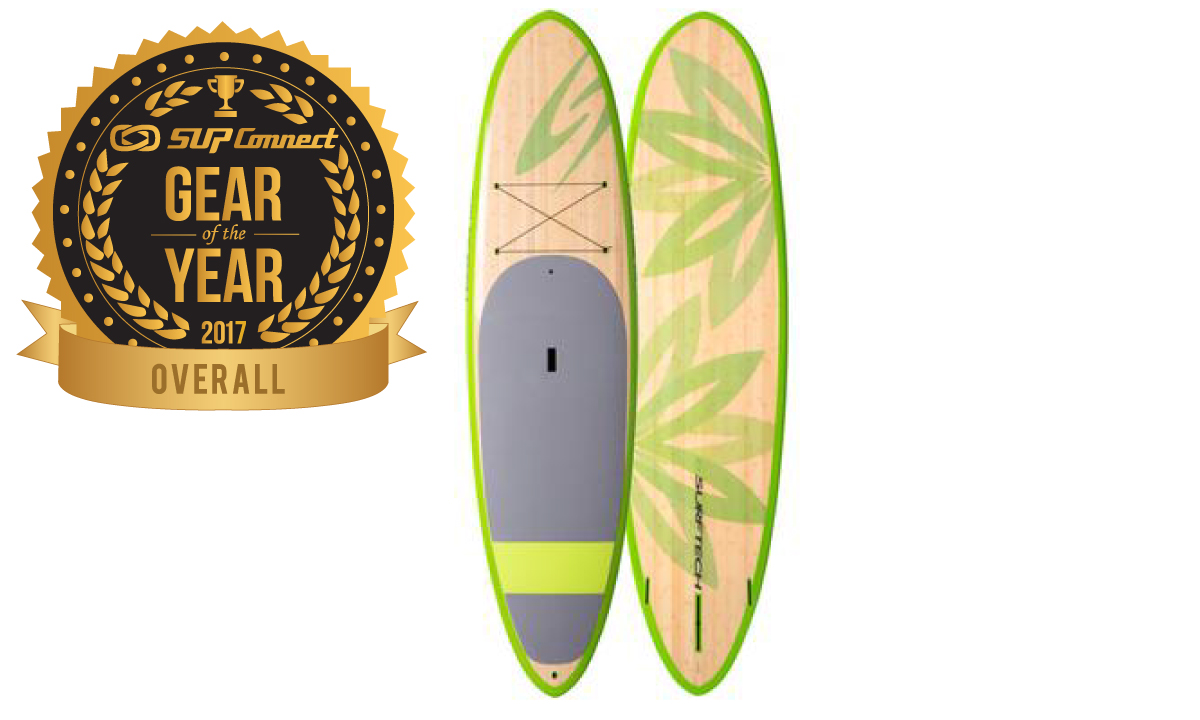 Every year, the winner of the Overall Supconnect Gear of the Year Awards meets two critical criteria: it has a distinctive offer and broad appeal. After extensively reviewing countless boards and processing feedback from some of the world’s best retailers, it was clear to us that the Surftech Generator did the best job meeting those criteria. The design is thoughtful making the board pleasant for paddlers of all skill-levels; the graphics are stunning and subtle, appealing equally to the men’s and women’s market; and the price-point makes the board quite accessible.

All Around - SIC Bullet

As a winner of various awards and races, the SIC Maui Bullet is always a serious contender for the All-Around Supconnect Gear of the Year Awards. What makes this board such a potent force in the sup market is its ability to retain highly advanced race board features while still being a board for paddlers of almost every skill level. And that’s no easy feat. The SIC Maui Bullet has a notorious record of winning the Hawaii Cross-Channel Races and at the same time being widely used on flatwater for touring, recreational use and even surf. It’s no surprise that it has once again taken the win for the best All Around stand up paddle board of the year. 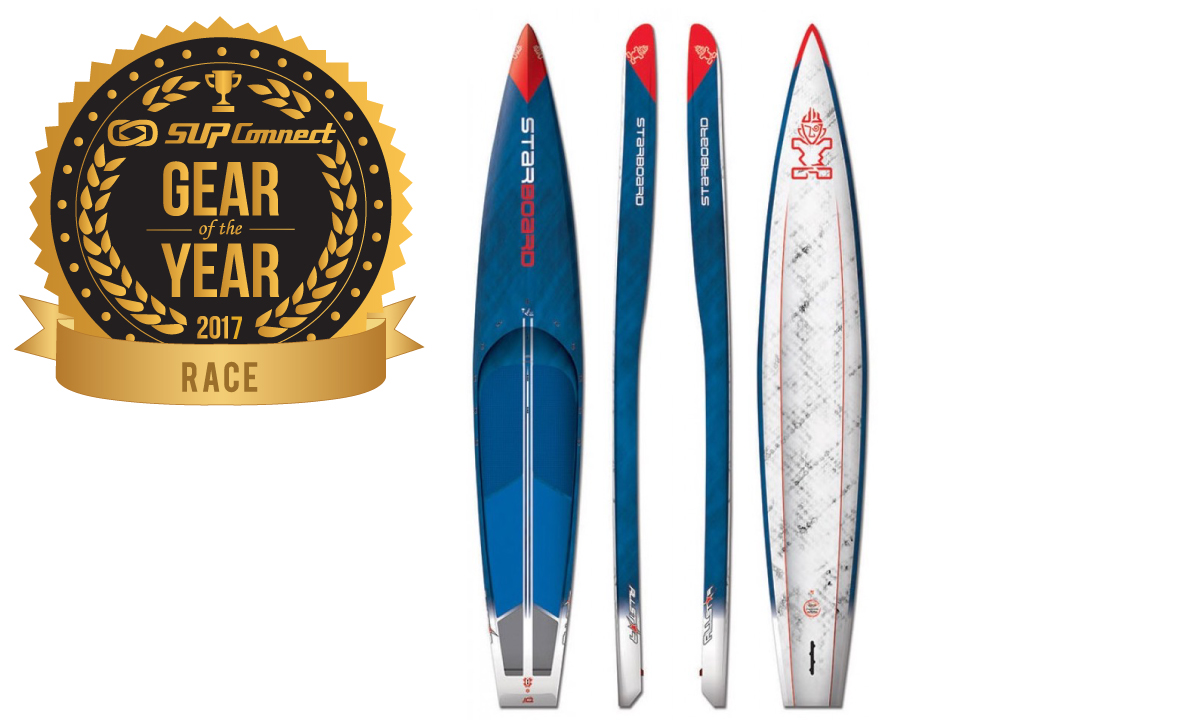 Winning races should always be a top criteria for a board to take the Race Supconnect Gear of the Year Award. However, race-winning alone is not enough, for put faster paddlers on a brick and they will likely continue to win races. But when premium retailers, who live in the perfect merge of products and consumers, tell you with a resounding “Yes” that this is the best race board, that’s when you know that you got a winner. And that’s the Starboard All Star. Add to it that the Supconnect Staff has also tested and been quite impressed with this race board, that settles it. The Starboard All Star is the winner of the Race Supconnect Gear of the Year Award 2017. 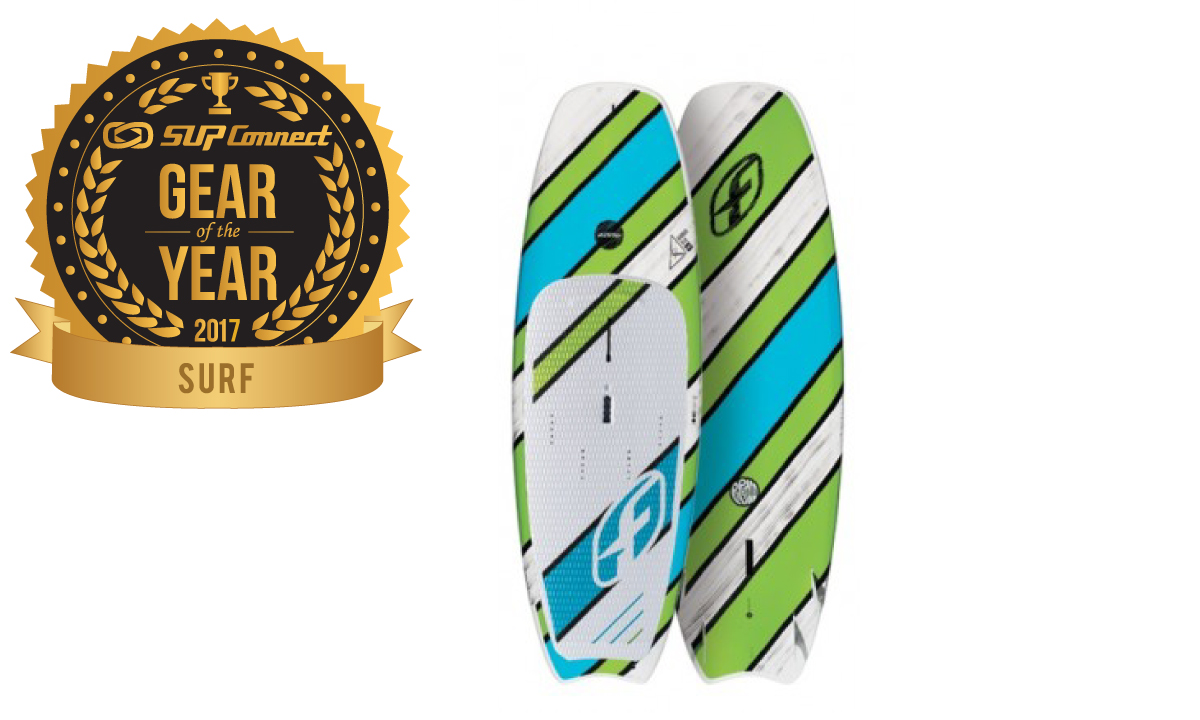 Most people and companies in life play to formulaic approaches, for they see the risks of failure as being too steep and unacceptable. However, it is the daring few, those who are willing to risk it that help us push the boundaries of what’s possible. And here is exactly where the F-One Papenoo has gone. It uses some of the cutting-edge concepts of shortboard design, applies it to sup surfing, and adds some colorful twists to give it an even more distinct personality. And, boy, oh boy!, does it perform. The F-One Papenoo, as Poeniki Raioha has wonderfully shown us in his surf sessions, looks apart and performs apart. This board inspires us and it shows us what’s possible. And for that, the F-One Papenoo is the winner Surf Supconnect Gear of the Year Award 2017. 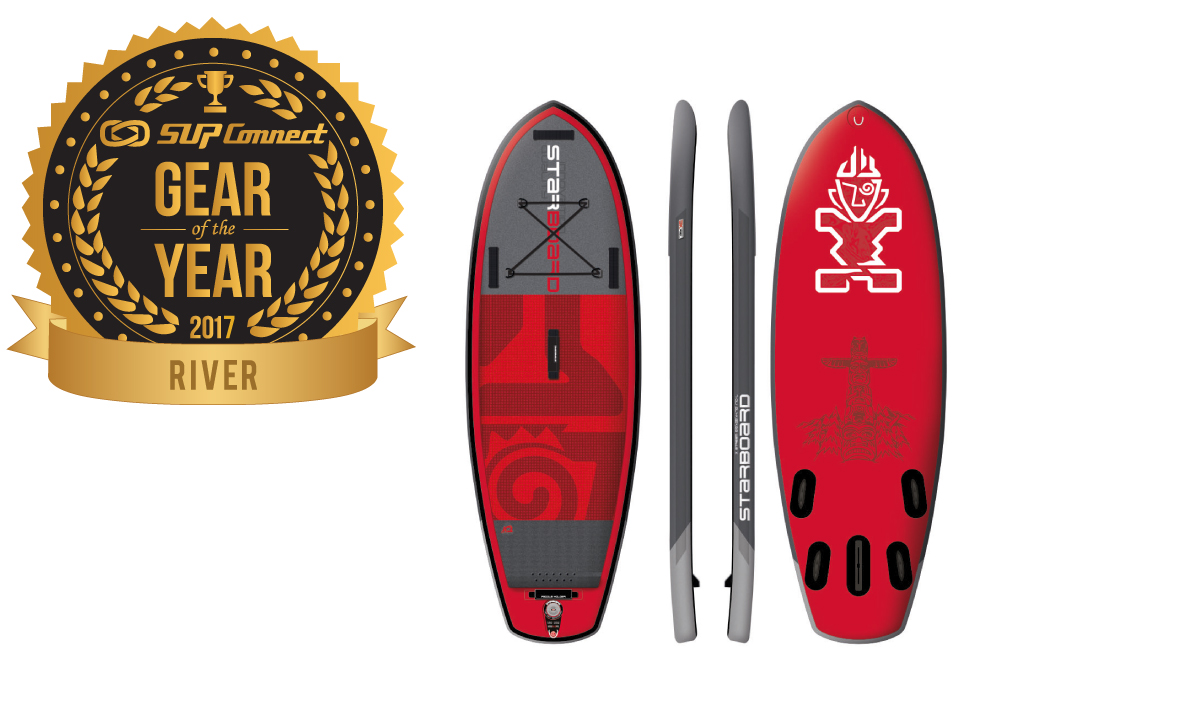 In the most dangerous of the standup paddle disciplines, it’s key to have the correct gear. And there are few better suited than Dan Gavere to develop that river sup board. As a veteran whitewater kayaker and the pioneer of river sup’ing, Gavere has developed the Starboard Stream, his trademark river board. And when you ask some of the world’s best retailers, no one got a better feedback than the Starboard Stream. Built for ruggedness and stability, this sup board meets the rigorous demands of river paddling with poise. That’s why the Starboard Stream is the winner of the River Supconnect Gear of the Year Awards 2017. 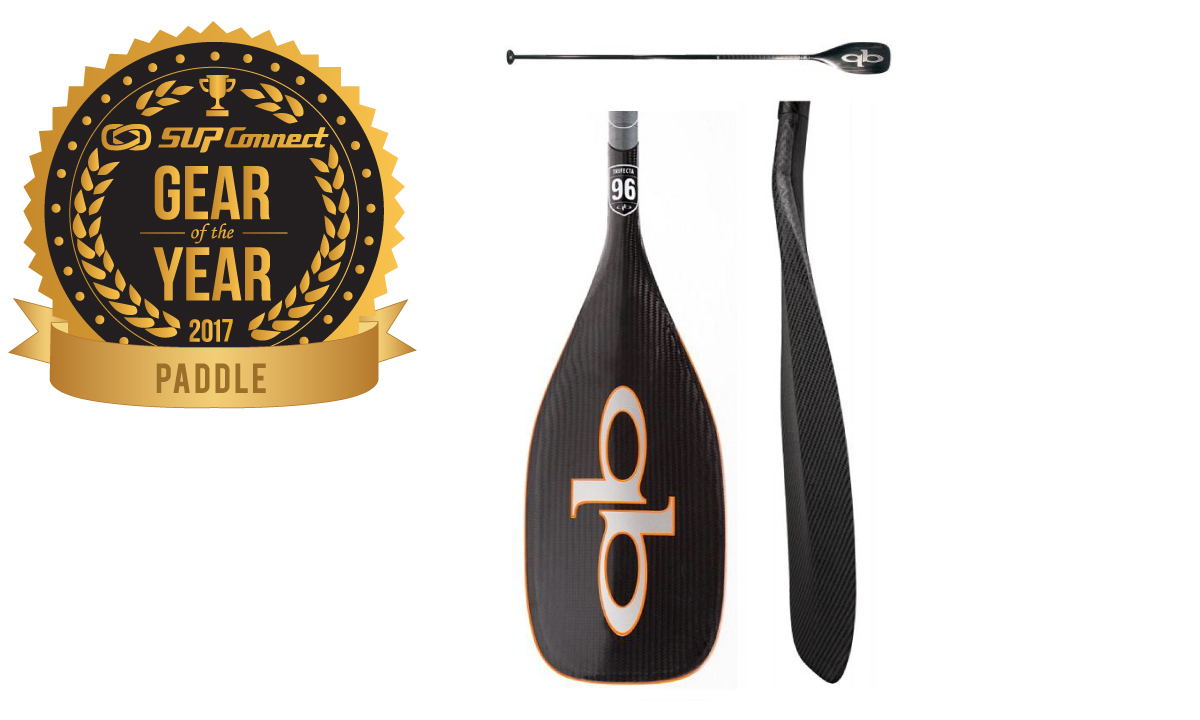 Many, if not most, of the top racers sport Quickblades paddles. Well, that we know. But then again, fast paddlers can go fast on many things. Now when some of the world’s best retailers tell you repeatedly, and year-over-year, that the Quickblades Trifecta is the paddle to beat, then you know that that product got something special. And that’s no surprise. Jim Terrell, a former olympic paddler, has done a tremendous job engaging the world’s best athletes and meshing their feedback with all his paddling and construction background. That’s why it’s no surprise that the Quickblade Trifecta is the winner of the Paddle Supconnect Gear of the Year Award 2017. 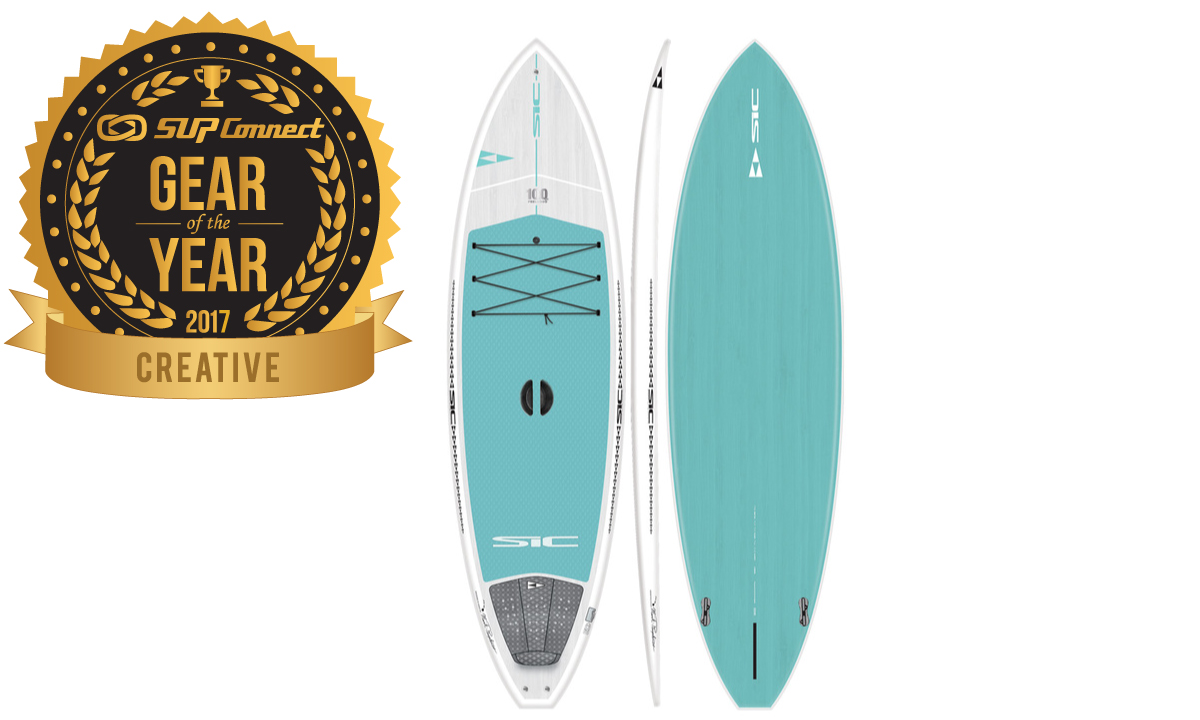 According to industry statistics half of the stand up paddle board market is comprised of women. And yet, somehow, the shadow of sup’s heritage in surfing still haunts most of the brands, leading them to build bland, tasteless, and boring looking boards targeting brute men with no creative touch – and notwithstanding, your beloved writer is such a man. Few brands focus on producing artistically inspired, and visually attractive boards, which convey thought and feeling through its graphics and color scheme. Here is where the SIC Maui Feelgood has stepped outside of the male-dominated shadows of sup’s heritage and delivered an astonishing board that appeals powerfully to both the women’s and also men’s market. That’s why the SIC Maui Feelgood is the winner of the Creative Supconnect Gear of the Year Award 2017. 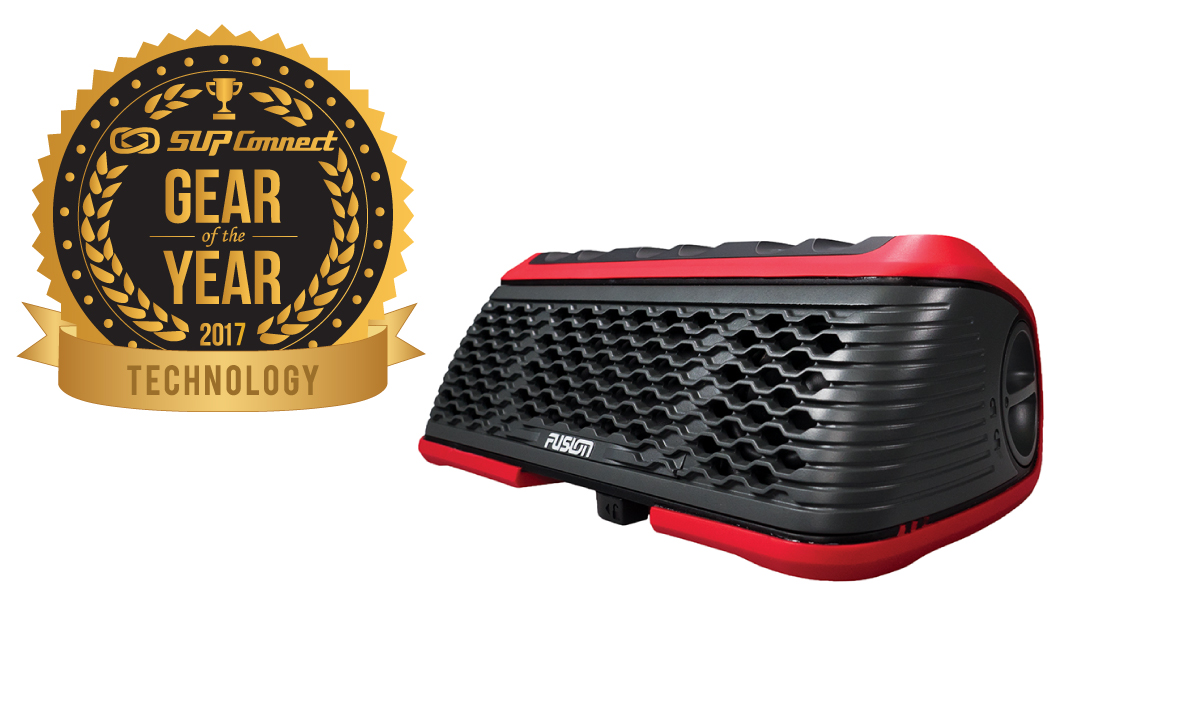 Tech and accessories have expanded standup paddling far beyond its origins in surfing. And for that few core sup surfers, that’s quite counterintuitive and yet wonderfully expansive. Tech and accessories have opened up sup to an even greater fishing market. It now appeals to yogi’s, whitewater enthusiasts, and beyond. And though tech and accessories are usually small in size, their ability to open markets couldn’t be more grand. In that spirit, it’s with great enthusiasm that we award the Technology Supconnect Gear of the Year Award 2017 to Fusion StereoActive. A group of sport enthusiasts with ample experience in industrial design and paddling developed a highly thoughtful mobile stereo device designed specifically with stand up paddling in mind, but also for the broader paddling community. With that, they have broadened the sup appeal even further and proving that one can still stand up paddle and rock some tunes!

Yoga and beauty should always come as one – oh, and yes, function should also be in the mix. Given the importance of balance for the yogi community, it’s essential for the best yoga paddle board to speak to that. It must be gorgeous, with the correct balance of colors plus also a traction pad that’s both comfortable and integrated with the board’s colors. The board’s design must be stable on the water but with an excellent platform for the yoga zen. And don’t forget the weight. It must be fairly lightweight but even more importantly have a handle that makes it easier to carry. And on goes the list of demands, like bungee cords, a solid construction, etc. It is no surprise that the BOGA Bamboo has consecutively won the Yoga Supconnect Gear of the Year Awards. 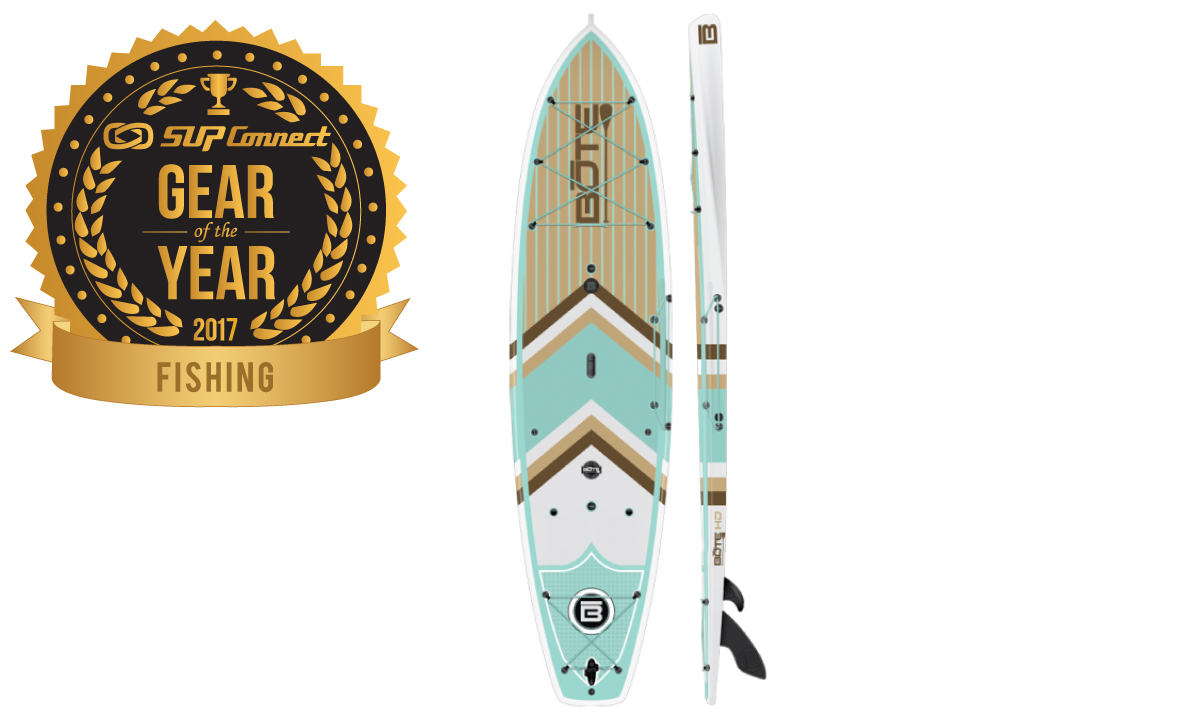 Have you personally tested over 80 paddle boards within just one year? No! Have you gathered feedback from some of the world’s most premium retailers? No! Have you visited nearly every website in the industry? No! Have you been following sup fishing before that was even a category in stand up paddling? No! Well, the Supconnect Staff has done all the above and more. And here is the bottom line. When it comes to SUP fishing, the brand that says “we don’t do ugly” means every bit of that. BOTE is the pioneer and leader in the paddle board fishing market for a reason. We’ve vetted fishing paddle boards from countless angles and the BOTE HD is worthy of the Fishing Supconnect Gear of the Year Awards in every single sense of those words. It delivers unparalleled function for fishing, stunning graphics, and a uniquely committed group of sup fishing enthusiasts. 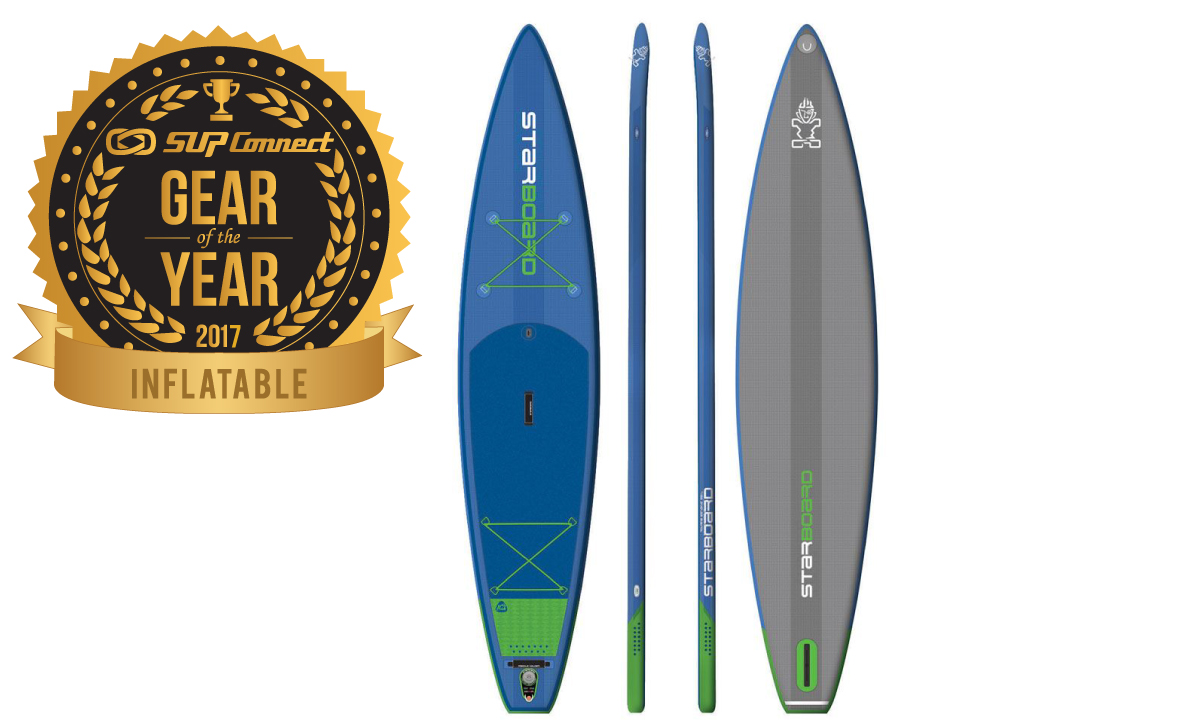 Obsession with quality and performance is synonymous with the man driving Starboard, Svein Rasmussen. Svein has a crew of folks personally unpacking, running QC, and re-packaging every single Starboard inflatable. That, my friends, is an illustration of the impetus behind the Starboard brand. And here, once again, they have delivered. The Starboard Touring Zen has won the “A” grade by the Supconnect Staff and received the most votes from premium sup retailers, making it the undisputed winner of the Inflatable Supconnect Gear of the Year Award 2017. The board is incredibly well-built, offering an excellent combination of sturdiness and lightweight. The graphics are thoughtfully held together throughout the entire board. And the price point makes it quite accessible.