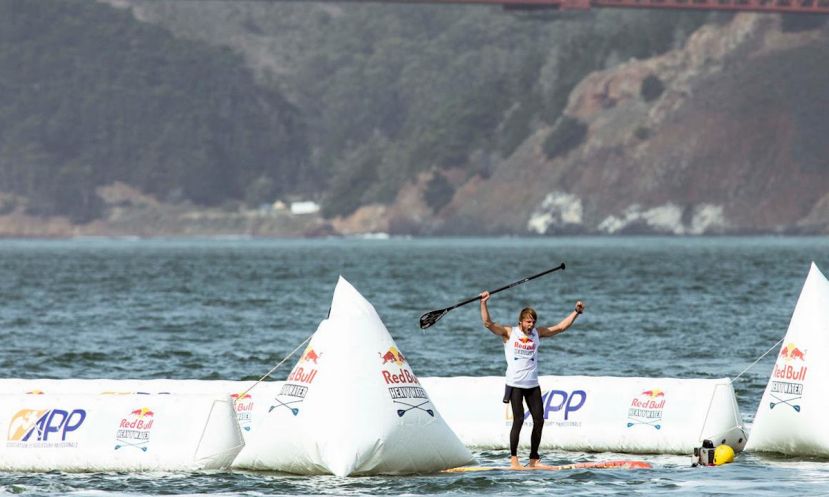 With the event being green-lighted earlier in the week anticipation for the event grew with each day as the swell forecasted for 10-15ft surf. On Friday morning spectators and athletes were greeted with just that. Heavy surf in the 10-15ft range and somewhat rough and stormy conditions with overcast skies, winds and texture on the water.

Athletes were transported by boat out to the race start line just outside of the lineup at Ocean Beach in San Francisco. The race began at 10am and Connor Baxter took the lead and was first to make it to the beach after the start. His lead wouldn’t last long though as the heavy surf made for a difficult paddle getting back out and on towards the Golden Gate Bridge. Many of the athletes weren’t even able to make it back out and called it quits after a rough time and damaged equipment.

At about 30 minutes into the race Naish and Red Bull athlete Casper Steinfath had taken a two-minute lead and was headed for the Golden Gate Bridge, ahead of NSP’s Travis Grant, Starboard’s Ryan Funk and SIC Maui’s Kody Kerbox who were going back and forth for places second through fourth.

For the remainder of the race Steinfath held his lead and was the first to paddle across the finish line winning the biggest payout in SUP history, a total of $20,000. Steinfath was undoubtedly elated with his performance and thrilled to end his 2017 racing season on a high.

In second place it was 17-year-old Ryan Funk who edged out seasoned pro Travis Grant and not far behind them was Kody Kerbox to claim the fourth place finish. With no live feed and only brief updates from Anthony Vela via the APP World Tour Instagram account the anticipation of what was going on during the race was intense. There will however be a highlights video likely to come from the APP World Tour and Red Bull so stay tuned for that. 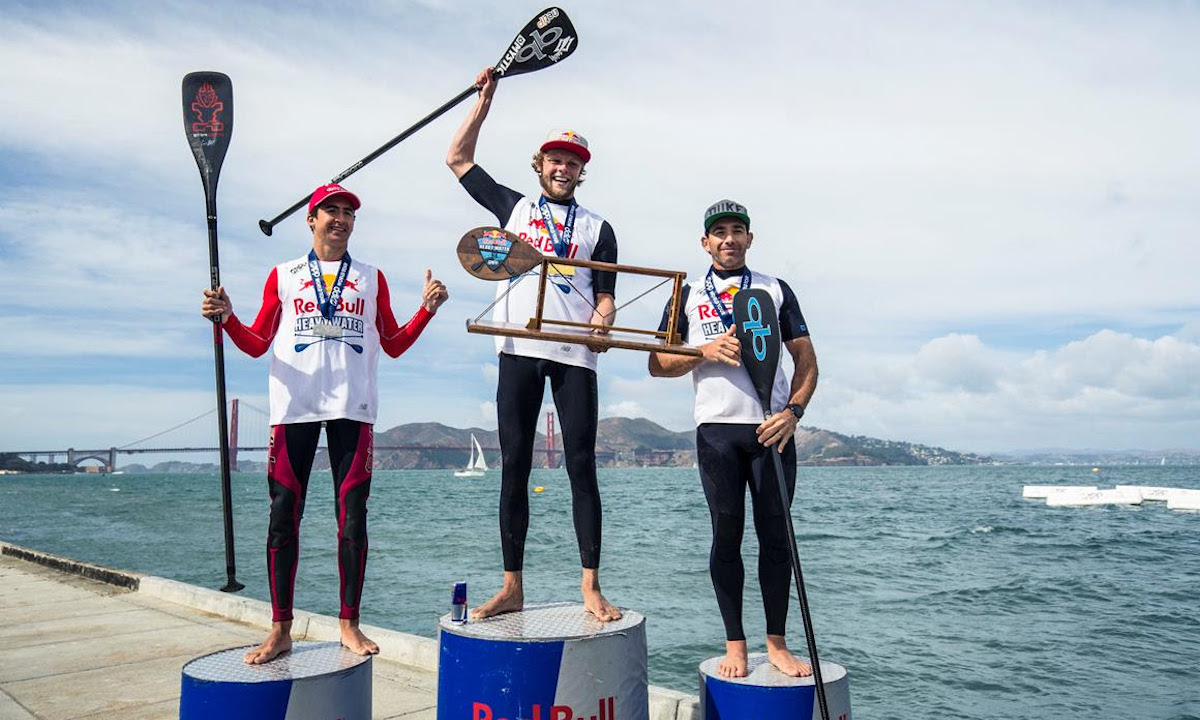 Going into the competition, Casper Steinfath ranked 3rd in the current APP World Championship standings, behind Mo Freitas (HI) and 2016 Red Bull Heavy Water victor Connor Baxter (HI), who were tied for 1st, with the race acting as a possible tiebreaker for the duo, and culminating event for the 2017 Championships. With results from today’s race collated, the ultimate 2017 World Championship was awarded to Connor Baxter (HI), with 32,500 points, closely followed by Mo Freitas.

Tristan Boxford, CEO of the Waterman League, said, “We are ecstatic to have this epic event wrap up the 2017 APP World Tour -- this year’s Red Bull Heavy Water really asserted the name “Heavy Water”. First and foremost, we chose some pretty spectacular conditions to run in, essentially the first big swell of the year, so this was without doubt, hands down, the most extreme race that’s ever been done. We tested the best in the world, and they really came out with flying colors.”

Also worth noting during the Red Bull Heavy Water event this year were the women and what they were doing behind the scenes of the event. After a second year of not being invited to this prestigious event the women of stand up paddling have joined together to call for equality in SUP racing. You can read more on that HERE.

More in this category: « Women of SUP Stand Up for Equality Shakira Westdorp & Iballa Moreno Surf the Canaries »