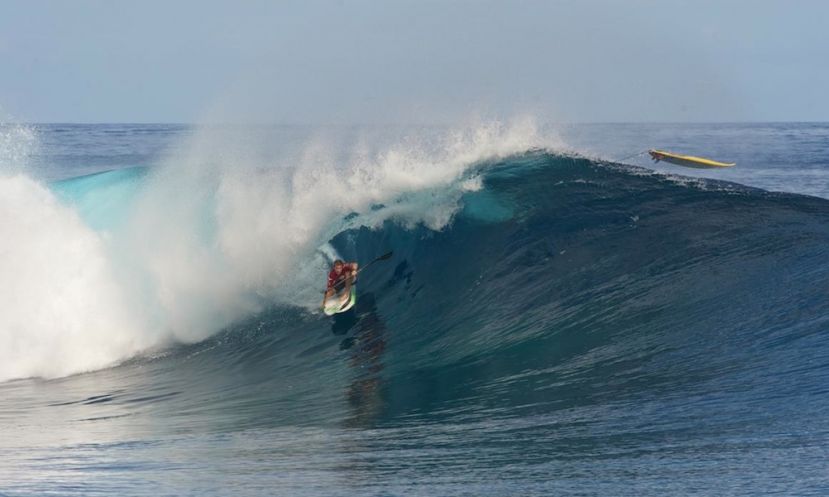 Justin Holland (Starboard) looked more determined than ever to better his fourth place at Stop 1 at the Sunset Beach Pro in Hawaii. | Photo Courtesy: Waterman League

TAHITI, French Polynesia - It was certainly a day for the Australians as all six of the crew from Down Under advanced through to Round 3. Kai Bates (Fanatic) was the first to progress in Heat 4 of Round 1, as the youngster picked off the best waves in what was a slow heat to skip the repechage round and advance directly into Round 3.

With the waves picking up in the next heat, Keahi De Aboitiz (JP Australia) wowed the crowds in the channel with a commited backhand re-entry for his direct advancement. Justin Holland (Starboard) looked more determined than ever to better his fourth place at Stop 1 at the Sunset Beach Pro in Hawaii. Holland dropped into his second wave and tucked into a beautiful tube to score an 8 point ride, sending Noa Ginella (Naish) & Julien Bouyer into the Repechage.

James Casey (JP Australia), Dave Muir (IOPS) & Beau Nixon (Naish) all needed the Repechage to progress onto Round 3. With new boards under his feet for this 2nd stop in 2015, Beau Nixon was stoked with how they were working for him. "I'm happy that I got through as I was the last Aussie waiting to get through so to be honest I just wanted to make it 6 into Round 3." Beau scored an 8+ ride with a series of powerful turns that caught the judges and spectators eyes. 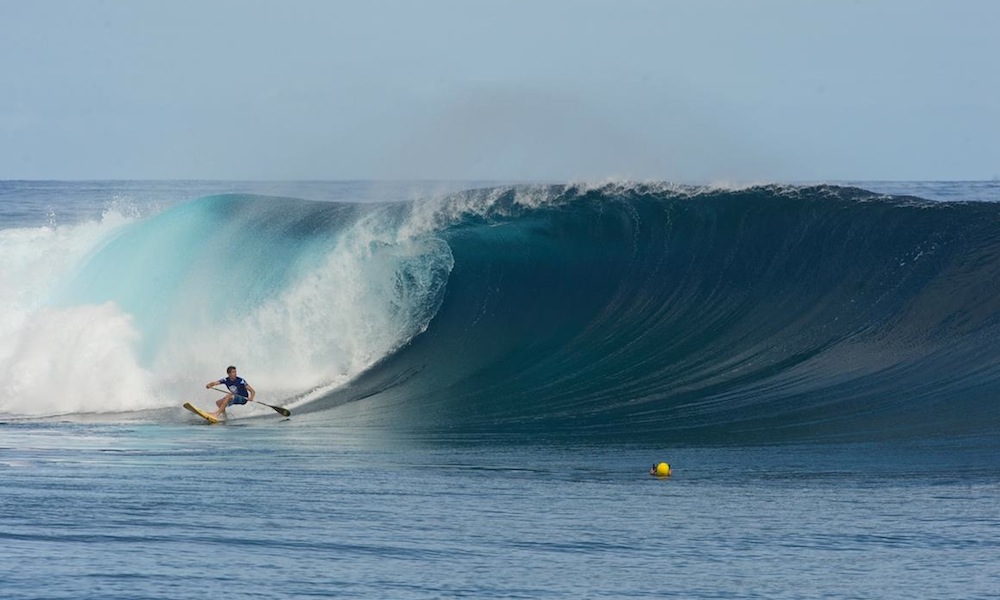 Sapinus delivers both action and drama as 4x World Champion Kai Lenny knocked out in Round 2. | Photo Courtesy: Waterman League

Another beautiful morning in Tahiti saw the 2015 #SapinusPro Main Event called on with the swell on the rise. Athletes were able to let loose in some unpredictable, but rippable surf. Kai Lenny (Naish) was looking for his second Tour win of the season after taking out #Stop1 of the #SUWT at Sunset Beach back in February. Tahiti in French Polynesia is a location that has eluded Kai in the past and proved to be his nemesis once again in 2015.

Going out in Round 2 Kai Lenny said, "I just didn't read the waves very well, this is a tough location to come to. I guess I will have to take this as my throw away." Going down in Round 1 the Hawaiian had to pick himself up and battle it out in the Round 2 Repechage to try and progress. The 4x World Champion just wasn't able to navigate the tricky Sapinus line up to land the excellent scores that he needed to advance through to Round 3.

To locate a SUP event near you, check out the Supconnect Events Calendar. 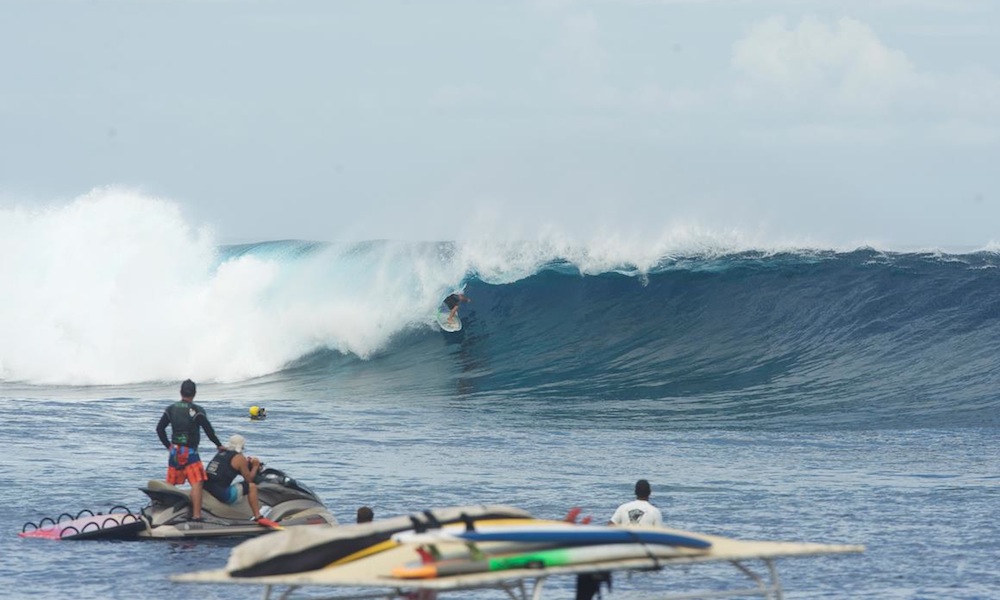 Zane Schweitzer (Starboard) scored the highest single wave score of the day: a lengthy barrel ride followed by a series of critical turns to secure him a 9.5. There is no doubt that Zane's pre-event training this week was paying off and his barrel riding skills are unquestionable. 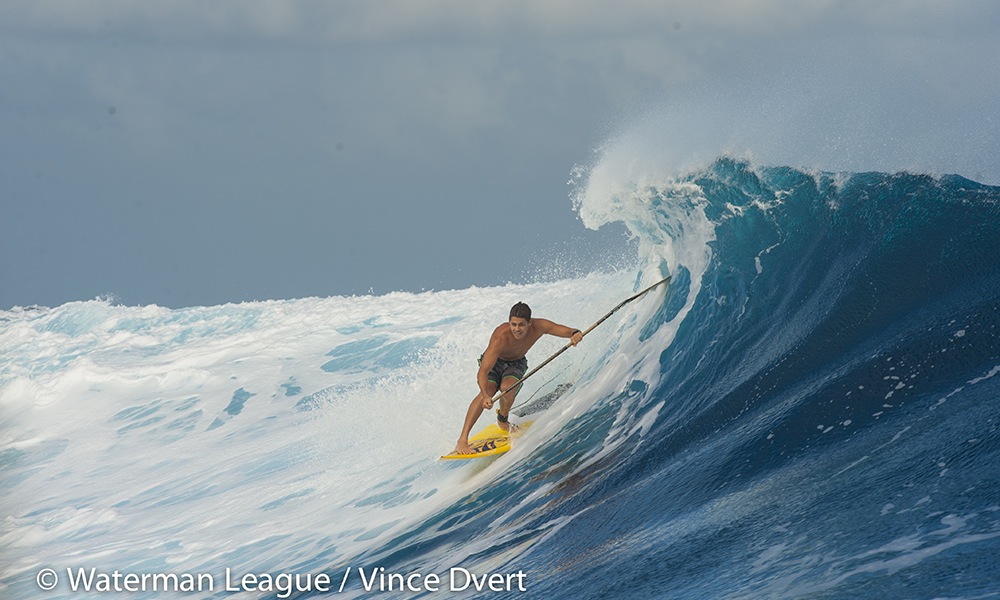 Noa Ginella looked right at home here in Tahiti, and showcased his supreme and stylish barrel riding in the final repechage of the day. | Photo Courtesy: Waterman League

Noa Ginella (Naish) found one of the cleanest barrels of the contest so far in Round 2, to impress the judges who rewarded him with an 8.6 as he knocked out fellow team rider and 4x World Champion, Kai Lenny (Naish) in the process. The North Shore youngster demonstrated smart wave selection, but fell short in Round 1 at the hands of the 'in form' Justin Holland.

The Naish Team rider showed real style in the Repechage and effortlessly dropped into one of the better barrels of the day. As the waves increase overnight, we anticipate some big things in the morning, so check out the highlights and make sure to stay tuned as the #SapinusPro Round 3 resumes at 7am HST this morning. 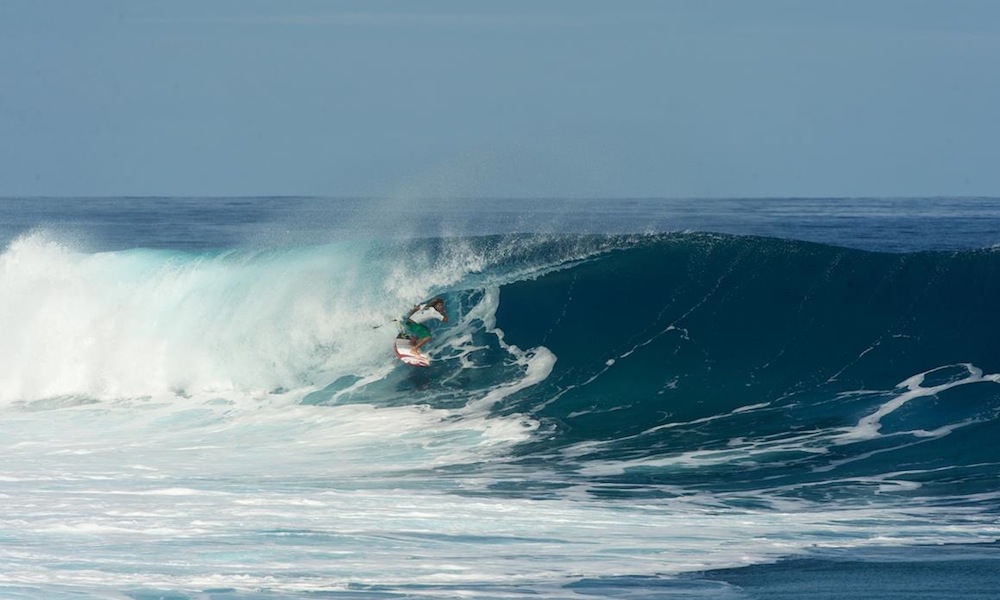 The Italian Airton Cozzolino steps up to be counted in Round 1. | Photo Courtesy: Waterman League

Italian Airton Cozzolino (Fanatic) showed that he is a force to be reckoned with as he sent Kai Lenny through to the Repechage and finding one of the few solid barrel rides of the day. Airton, like Keahi de Aboitiz (JP Australia) is a kitesurf Champion, but over the past few years, Airton has proved himself as a real threat on Tour. Watch out for the Italian when competition resumes today at Sapinus at 7am with Round 3. 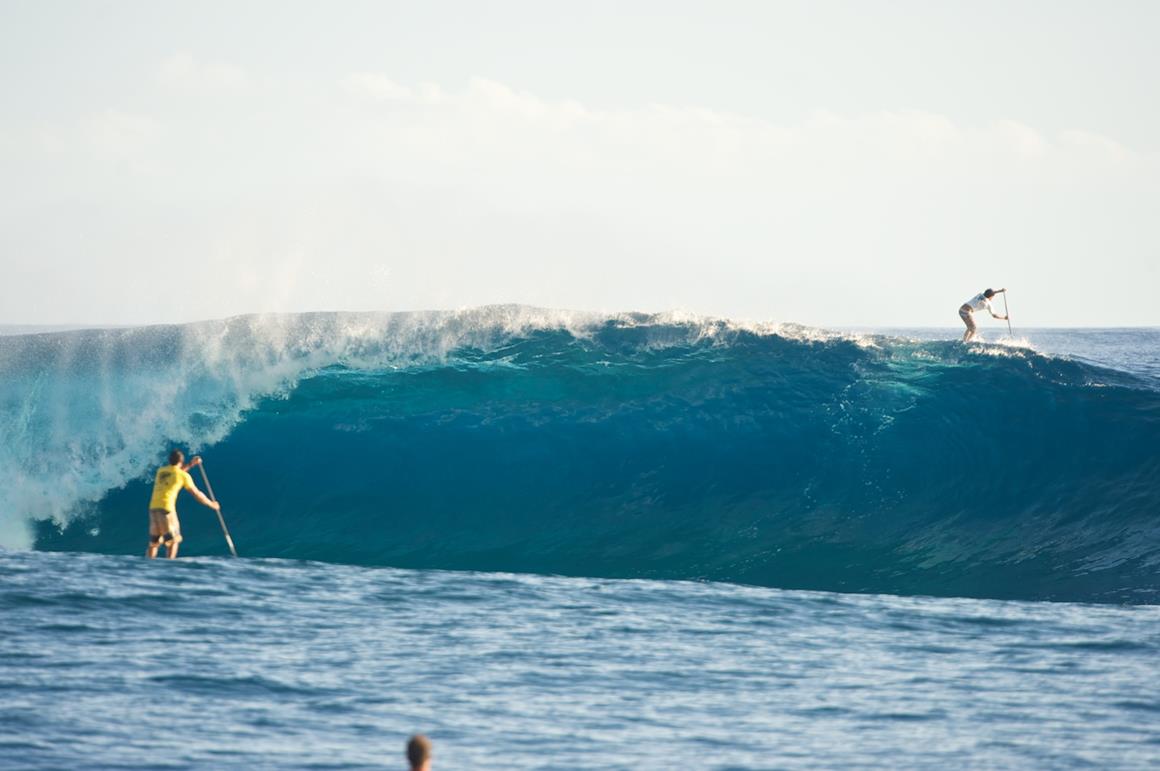 Local and international talent step up here in Tahiti for one of the most exciting Round 3 line ups yet, as surf promises to pump. | Photo Courtesy: Waterman League

Round 3 is stacked with a wealth of talent ready to do battle this morning. South African, Tom King (Coreban) made his presence felt by advancing directly through to Heat 3 and will take huge confidence ahead of the Man on Man Rounds.

Local Tahitian favourite Poenaiki Raioha (F-One) needed the Repechage round to progress but still will be looking to make the most of his local knowledge in his match up with Airton. Meanwhile, Sean Poynter (Starboard), Caio Vaz (Art in Surf) & Bullet Obra amongst others will all be major threats as we kick off round 3 this morning as the surf promises to be on rendezvous for the exciting culmination of this 2nd stop of the 2015 Stand Up World Tour.

Watch the highlights from Day 1 of the Main Event below.

For more news on the Sapinus Pro Tahiti, click here.