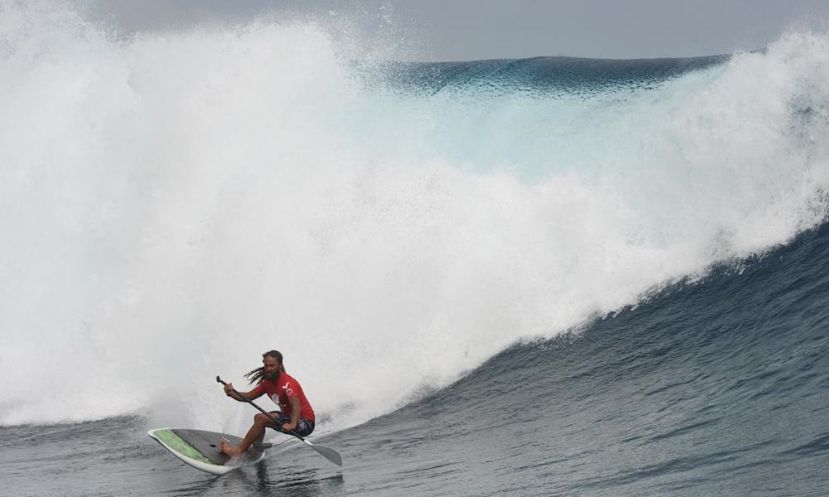 Hawaiian, Keali'i Mamala came on top in a tightly contested final, picking off the best set waves and driving smooth, but powerful turns on his way to victory. | Photo Courtesy: Waterman League

TAHITI, French Polynesia - After a 2 year hiatus from the beautiful Island Chain of Tahiti, the Stand Up World Tour marked its return to the islands today with the completion of the Air Tahiti Nui Trials of the 2015 #SapinusPro in great conditions. After two days of pumping swell during the days prior, today dawned beautiful and with the swell still pumping, allowing the up and coming athletes and local standouts the chance to showcase their skill on the global stage. As expected, there was a strong Polynesian theme running through the rounds, with a mix of Tahitian, Hawaiian and Kiwi competitors leading the charge from heat 1 on.

In the end, it was the Hawaiian, Keali'i Mamala who took the honors in a tightly contested final, picking off the best set waves and driving smooth, but powerful turns on his way to victory. Keali'i deservedly earns his place in the Main event, as well as winning a round trip ticket on Air Tahiti Nui. Watch out for Keali'i as we get underway with the Main event tomorrow, as he will now come up against the local phenom and World #4, Poenaiki Raioha (F-One) and a fellow Big Island native, Bullet Obra in Heat one of Round one set to kick off at 7:30am HST. 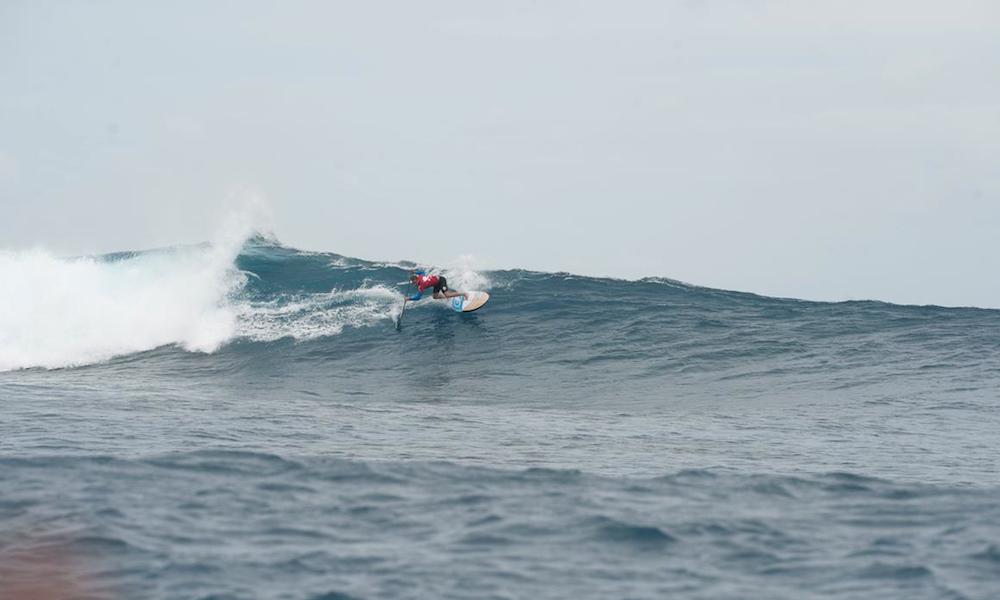 Atamu Conti (F-One) has long been a dangerous threat, having competed each year that the #SapinusPro has taken place, but also having ventured out to Sunset Beach for the World Tour Opener, posting some solid finishes, particularly at home here in Tahiti.Once again this year at the Air Tahiti Nui Trials, Atamu put on a strong performance, as one of the standouts of the day, making it all the way to the Finals to secure 2nd place and his well deserved berth in the Main Event. There is no doubt that Atamu will be a serious threat tomorrow as he will now come up against the on form American Sean Poynter (Starboard) and another Tahitian standout, Dorrence David.

Find a SUP Event near you! Check out the Supconnect Events Calendar here. 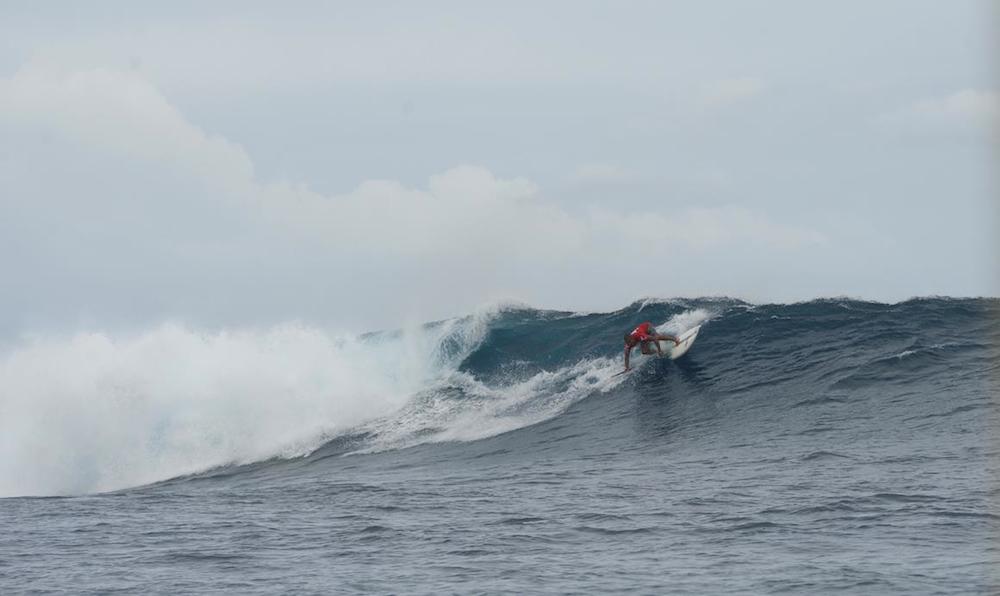 Daniel Kereopa from New Zealand proved his worth today with a consistent and high performance display of surfing that earned him 3rd place overall in the Trials and his place in the Main Event. Daniel was also on the road to victory in the finals, with the highest score of the heat, but was unable to find a back up score to take victory.Daniel will definitely be one to watch out for in Round 1 of the Main event tomorrow as he will come up against World #2 Caio Vaz (Art in Surf) and the powerhouse and previous Tahiti event winner from 2010, Dave Muir (IOPS) from Australia. 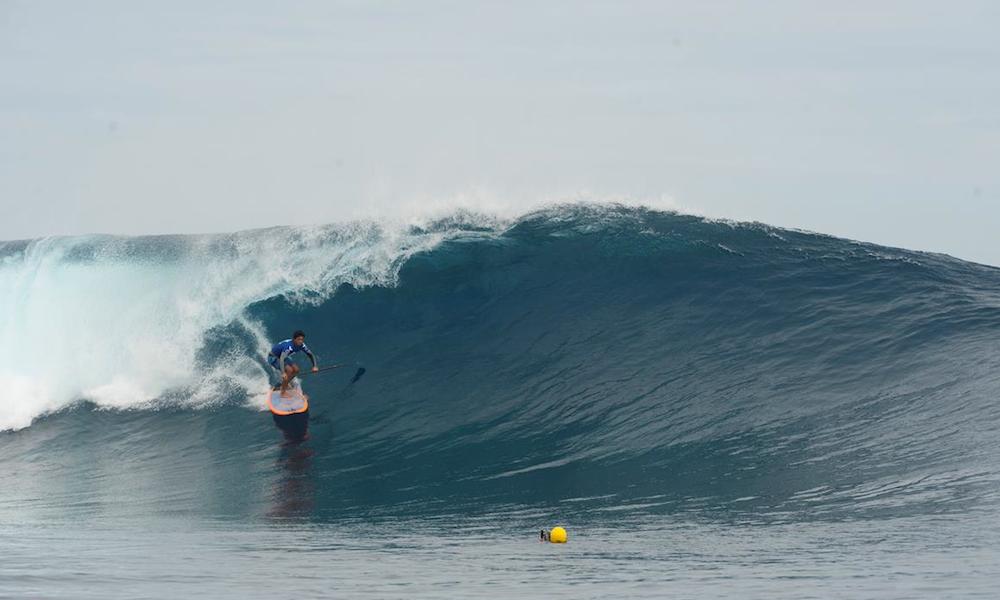 Tehotu Wong secures 4th in the Trials and the final coveted spot in the Main Event. | Photo Courtesy: Waterman League

Tehotu Wong has been spending his winters on the North Shore these past few years, with family in Hawaii and Tahiti, but originating from Tahiti and looked to be coming of age this year in the Air Tahiti Nui Trials, as he put together a string of impressive performances to earn a spot in the final and as a result the main event.As a member of the young wave of Tahitian talent coming up the ranks, Tehotu will be a name to watch out for in the main event and looking forward here on the Stand Up World Tour. He will now come up against 4x World Champion Kai Lenny (Naish) and another up and coming talent from Italy, Airton Cozzolino (Fanatic). 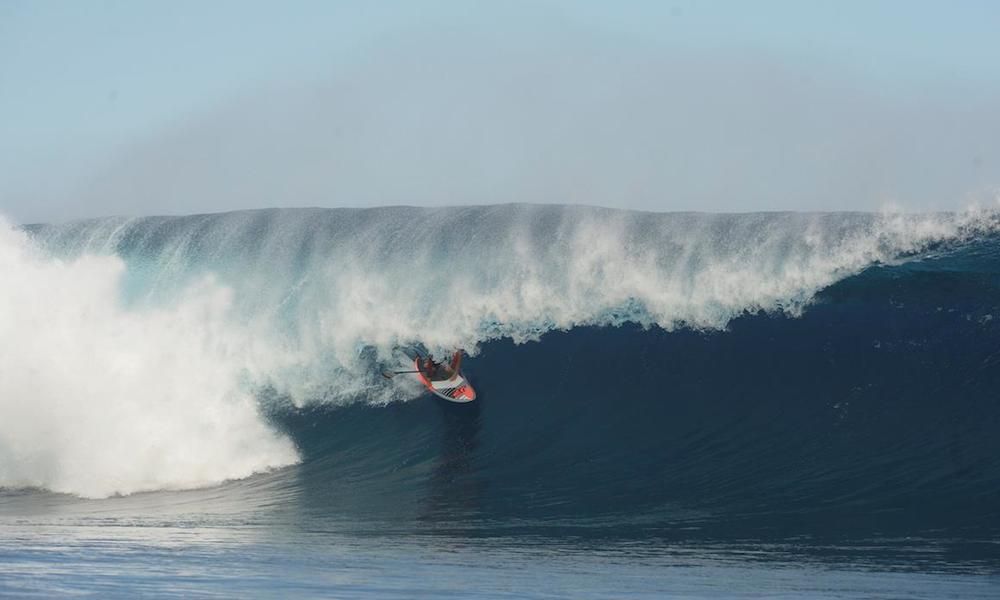 Rising swell will be on tap through Sunday and Monday as we kick off the Main event of the 2015 #SapinusPro Tahiti. | Photo Courtesy: Waterman League

After a great day of action today here in Tahiti, tension is now mounting as we prepare for a couple of days of epic action here at stop number 2 of the 2015 Stand Up World Tour, as the World's best take to the water to battle it out for the event crown and vital ranking points in their journey towards a World Championship Title.The forecast predicts a rising swell through Sunday and Monday with a peak in the morning on Monday that should provide the ideal conditions for the world's best to excel.

Check out a recap of Day 1 at the Sapinus Pro Tahiti below.

For more news on the Sapinus Pro Tahiti, click here.

More in this category: « SUPing For Science: Earth Day, 2015 Australians Excel And Upsets Occur On Day 1 Of Sapinus Pro Tahiti »