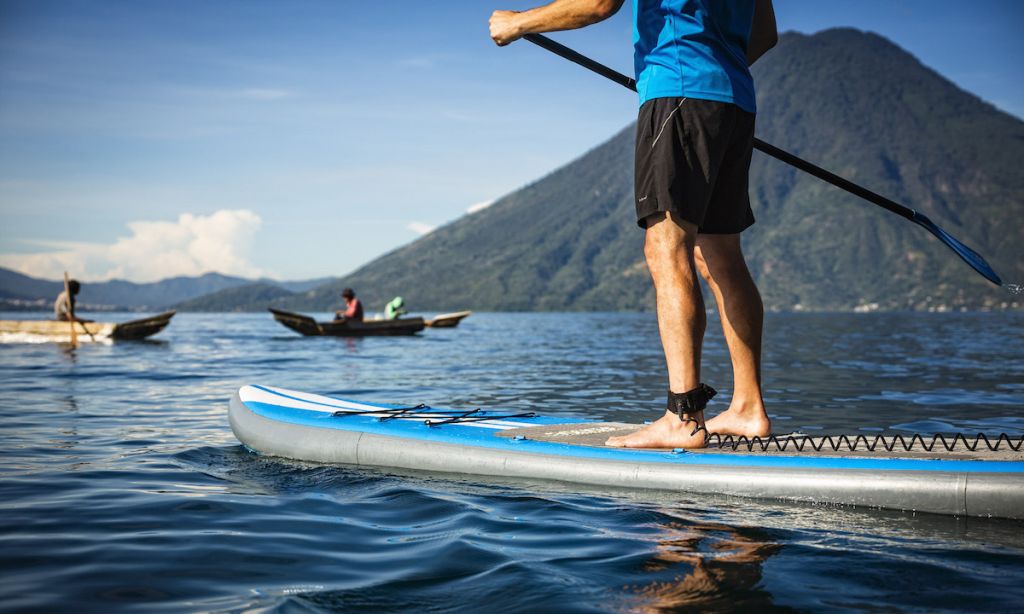 The author of Brave New World, Aldous Huxley, once called Lake Atitlán “the most beautiful lake in the world” and before 2020 it was Guatemala’s top visitor destination with almost two million visitors annually. It is the deepest lake in Central America at 1,115 feet and covers an area over 50 square miles at a nearly 5,000 foot elevation. It is known for its indigenous Mayan communities that have called the lake home for centuries and the scenic beauty created by steep forested hills and three conical volcanoes converging at the water. This idyllic backdrop creates the ultimate paddle destination and in the summer of 2019 the author circumnavigated the lake over eight days by inflatable SUP.

All international flights to Guatemala arrive in Guatemala City at La Aurora International Airport. From there you take ground transport to Panajachel at the shores of Lake Atitlán, a four-hour ride. At Panajachel you can board a water taxi to any number of the small towns around the lake to begin your adventure. Most visitors opt for the north shore and this is where you’re likely to find paddle boards for rent unless you bring your own.

There are truly only two discernible seasons on Lake Atitlán: dry and rainy. Dry season starts in November and runs until May. It is characterized by colder temperatures from December to February around 18C (64F) with a small summer window from March until May around 23C (73F). Rainy season is from May until October. During rainy season, you will often have sunny and calm mornings but heavy clouds and rainfall in the afternoon. No matter what time of year, Lake Atitlán will be subject to high winds in the afternoon caused by warm Pacific winds from the south meeting colder offshore winds from the north. This combination creates what is known as the “Xocomil” and anybody who lives on Atitlán knows that you don’t attempt water sports during the Xocomil. The Xocomil usually comes from the south between the volcanoes near Santiago de Atitlán but winds can come from almost any direction at any time. Regardless of time of year, the mornings provide the best conditions for paddling on the lake.

The best paddling months are March through May and July through August because of the higher temperatures and less intense winds. The water temperature never drops below a temperature that is uncomfortable or requires a wetsuit and averages around 21C (70F). The high altitude of the lake and lack of shade in the middle of the lake makes the sun rays a lot more intense so paddlers should bring an organic sunscreen to enjoy any extended amount of time on the water.

One of the biggest hazards on the lake is the boat (lancha) traffic. There are no maritime laws or regulations on the lake and some drivers can be reckless and inattentive. Paddlers should always be aware of their surroundings and give way to the boats as recreational water sports are often seen as less important to the local community.

This small town on the north shore of Atitlán is an ideal base to begin your lake adventures as it’s a short water taxi ride from Panajachel. The author began and ended his expedition in this town and recommends the lakefront Iguana Perdida Hotel. It’s a fun and relaxing place to meet guests from all over the world during their communal dinners. Santa Cruz is actually two towns with a lower and upper section. Many of the lake’s towns were built on higher ground and only started building near the water with the advent of tourism. This is because the water level of the lake throughout its history fluctuates and when paddling around the shores it is not uncommon to see remains of abandoned buildings where foreign speculators ignored local wisdom and built too close the lake. The upper town is where most indigenous peoples live and you can easily visit by hopping on a tuk-tuk, the ubiquitous motorcycle taxis that were imported from Thailand, that you can find throughout Guatemala. Visit the CECAP, a delightful NGO/vocational school you can support by having lunch at their student-run restaurant that serves local cuisine and has a beautiful deck overlooking the town and lake.

Santa Cruz is also home to the lake’s premiere SUP operator, SUP Atitlán (www.supatitlan.com). SUP Atitlán was started in 2017 by Canadian owner and guide Marshall Perry who was the first to bring a full service SUP business to the area. Trained in California by the ASI (Academy of Surf Instructors), he has been introducing the beauty of the lake and sport to hundreds of international and local clients of all experience levels. SUP Atitlán offers a fleet of over 10 quality Isle inflatable boards that can be rented or are often included with hotel bookings. Marshall offers 3 different private group paddleboard experiences that take full advantage of the early morning calm water and recommends a guided experience because of the lake’s unpredictable weather patterns.

The waters around Santa Cruz and the north shore are best for morning exploration with calmer waters. This area is also replete with steep rock faces, sandy beaches hidden coves for cliff jumping and many homes that you can rent with private docks.

Santa Catarina Palopo and San Antonio Palapo are situated on the eastern shore of Atitlán and offer a more authentic local experience as there are few expats who live in this area and fewer tourists. You can visit textile merchants like Tienda Candelaria in San Antonio and ceramics vendors, while in the morning watch the local women washing laundry at the lakeshore. If you take your board out on the water you can get up and close to start conversations with the local fishermen paddling their cayucos--small wooden flat bottomed canoes maneuvered with paddles with long pointed blades. Many on this side of the lake view standup paddleboards as novelties and call them kayaks. Lodging options are few here but the Hotel Terrazas del Lago is close to the water and will let you store your board on their grounds. The stretch of shoreline heading towards the town of San Lucas Toliman is exceedingly beautiful and here you will pass a few lakeside villas owned by the country’s wealthiest families and tycoons.

Though appearing like an actual city versus a tranquil lakeside town, Santiago de Atitlán is perhaps the most traditional of the lakeside towns and worth the visit for its cultural sites and proximity to local hiking. Here you can visit the popular outdoor market and formidable Iglesia Parroquial Santiago Apostal, a historically significant parish church. You can also visit local boat-builders to see how the traditional cayuco boats are constructed.

Across a short inlet from Santiago lies the oft-overlooked archaeological site of Chuitinamit. The site is known for its unusual Mayan petroglyphs and stone carvings. The ancient Mayan culture still has great influence today in modern Guatemalan society and in Santiago, you can search for the temporary shrine to Maximón, a Mayan saint who is tended to by devout followers who give him cigarettes and liquor, praying for blessings in return.

Aerial view of the area of Santiago Atitlan. | Photo: Shutterstock

Santiago is also a great basecamp for exploring the volcanoes Tolimán and Atitlán that are best seen with a local guide for security. Less daunting a hike but no less spectacular is Cerro de Oro, which features several Mayan ceremonial sites.

San Pedro La Laguna and its neighbor San Juan La Laguna occupy the westernmost end of the lake but couldn’t be more different from one another. San Pedro sees the most visitors of all the towns and attracts them with its reasonably priced accommodations and party scene. There are a number of Spanish schools that have set up shop here and the town is closest to Volcán San Pedro, the most accessible of the three surrounding volcanoes and an invigorating hike.

San Juan La Laguna rises above a spectacular bay and is mellow in comparison, offering a more attractive setting to many to study Spanish and experience indigenous life. The town takes great pride in its craft traditions and has formed numerous cooperatives dedicated to weaving, painting, coffee growing, chocolate production and fishing. Book a stay at the lakeside Eco Hotel Uxlabil Atitlan and arrange to join a local fisherman of San Juan who will take you out in his cayuco and teach you traditional fishing methods.

You can explore the area by foot visiting local hot springs, climbing the volcano San Pedro, or getting up at the crack of dawn for an unforgettable sunrise hike to Indian Nose. The Indian Nose is a sharp peak on the northwest side of Lake Atitlan that resembles a reclining Mayan. It takes about two hours to ascend the peak in the dark to arrive at an overlook that has the most spectacular panoramic view of the lake at sunrise.

Considered the prettiest of the lakeside villages, San Marcos La Laguna is a unique mix of locals and global seekers who believe the place has a spiritual energy. Here you will find centers for meditation, holistic therapies, massage and yoga. The water is some of the cleanest in the lake and there is a cliff diving platform called the “Trampoline,” just a short walk from the center of town. The town has a good mix of shops and eateries and even a lively evening music scene at the Hostal Del Lago.

According to Marshall Perry of SUP Atitlán, paddle boarding at Atitlán has seen a steady increase over the last 4 years. It was almost non-existent before that due to the cost of importing epoxy boards to Guatemala but better build quality and cheaper inflatable boards have since made the sport available to more enthusiasts. While you can paddle anywhere on the lake, cruising the north shoreline from Panajachel to San Marcos is where you will see the majority of paddlers. Villages like Panajachel, Santa Cruz, Tzununa and San Marcos receive the majority of international visitors so this is where you will find the biggest SUP scene.

If you can, paddle with a guide like Marshall or with another experienced paddler who can speak Spanish. Stay close to shore and out of the way of the lanchas to be safe and wear bright colored clothing to be visible from a distance. Be sure to bring water with you as well to stay hydrated, preferably in your own reusable water bottle so as not to further contribute to the plastic waste stream of the communities. Most importantly, head out on the water early and do not be afraid to call it a day when the wind picks up. Last, smile and have fun, you’re in Guatemala paddling on one of the prettiest lakes on the planet!

More in this category: « Paddle Boarding Coconut Island, Hawaii Paddle Into History in the Hudson Highlands »