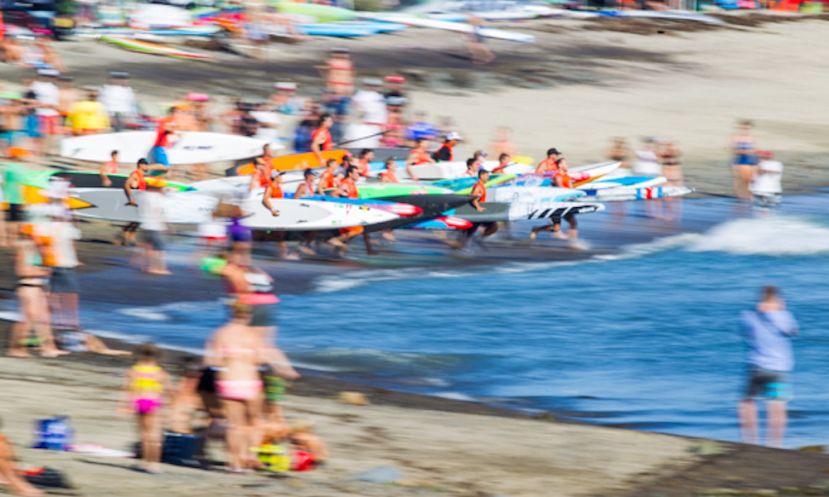 CARLSBAD, California – The surf was big Saturday during the opening day of the Pacific Paddle Games presented by Salt Life in Dana Point, California. But the athletic performances more than matched the oversized waves. The men’s technical race got started in fine fashion with Danny Ching easily winning his first heat that sent him directly into the semi-finals Sunday. The Southern California native caught a wave at each buoy turn, quickly extending his lead. Unfortunately, he broke a board in the mayhem.

“I was playing it safe,” he said. “I had to be pretty careful when I broke the board. ”Ching will use a production 14-foot board on Sunday to replace his custom ride. “(The production board) is what I’ve been training on,” he said. “Hopefully it was me catching all those waves and not just the board.”

The top 10 men from each of the four men’s heats moved on to the semis. Maui’s Zane Schweitzer (Starboard) won the second heat while Denmark’s Casper Steinfath (Naish) took the third matchup. San Diego native Noa Hopper and junior competitor as well, won the fourth heat of the day. 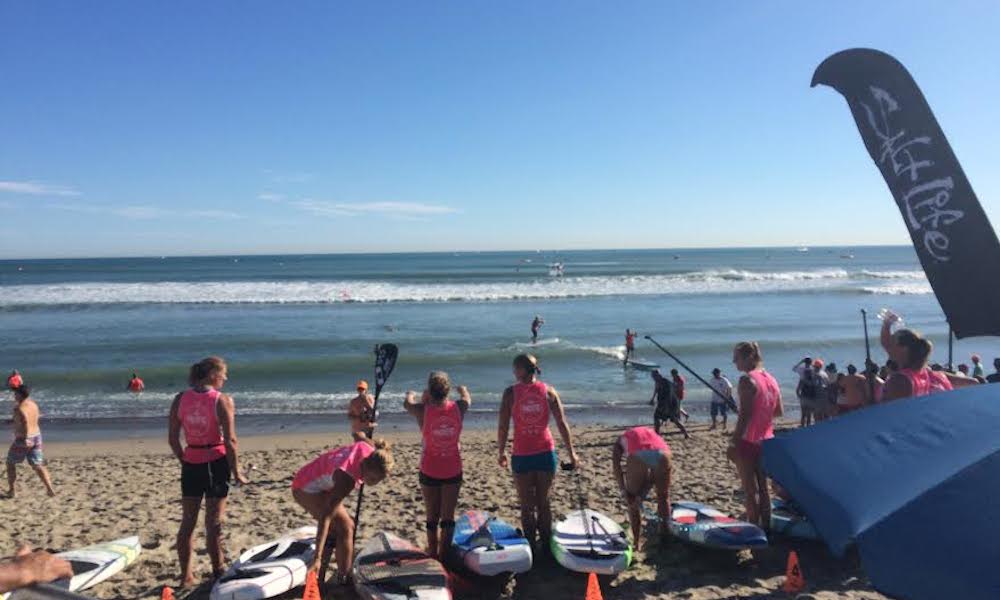 The ladies getting ready for the start of their heat on Day 1 of the Pacific Paddle Games.

The women’s side was intense as usual. Candice Appleby (FCS SUP) had a fantastic start and built a sizeable lead in the pumping surf, catching several solid waves. But Hood River, Oregon’s Fiona Wylde (Starboard, Werner Paddles) continued to chip away at her lead and was able to overtake the world champion at the end of the semi-final heat after Appleby fell. Both moved on to Sunday. Mayhem reigned during the second women’s heat. Annabel Anderson (SUP Think Tank) and Shae Foudy jockeyed for position early with Foudy pushing the decorated Anderson. The duo caught a wave together and while rounding the first buoy, Foudy’s leash became tangled in the marker as other paddlers came in to make the turn, creating complete carnage.

“So basically once I fell, there’s a voice (in my head going), ‘you can fight or you can give up’,” she said. “There’s nothing to do but get back up.”

Anderson was able to create a substantial lead and win the heat with Foudy fighting hard to finish second. Anderson’s win sets up a much-anticipated showdown with Candice Appleby. The Santa Monica Pier Race was the only head-to-head matchup this year for the sport’s two best racers. Their rivalry has driven interest in the sport of women’s SUP racing for the last four years. 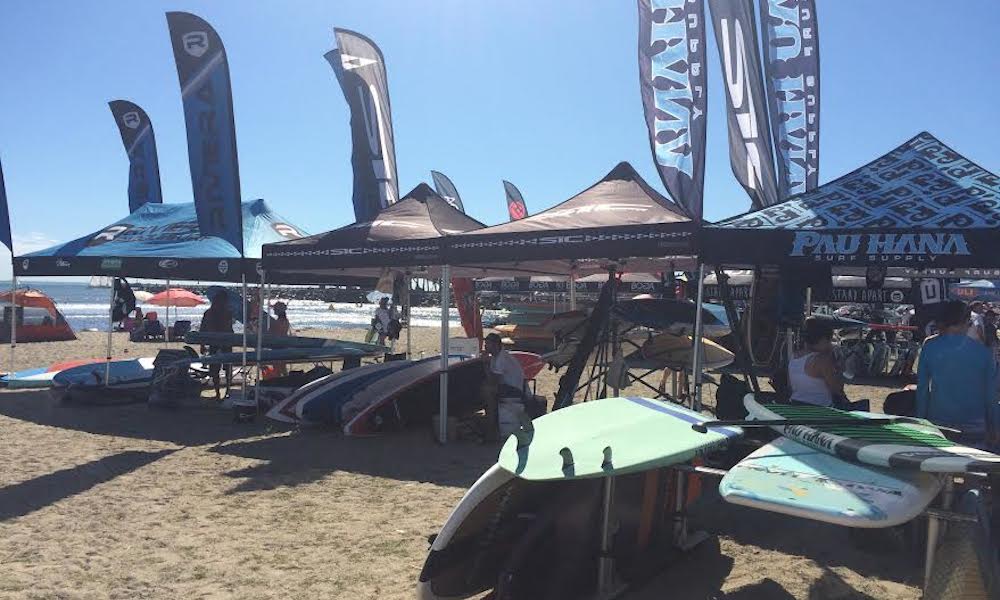 The Demo Zone was also stacked with tons of equipment for fans and athletes to try out.

The day was filled with competition from open SUP racing to junior pro technical races. Local racers had solid showings. Aside from Foudy, Hopper took second in the Junior Pro Technical race to Riggs Napoleon then won his men’s heat on his way to the semis Sunday.

And of course, the 5- to 8-foot surf was the great equalizer at Doheny State Beach.

The action resumes Sunday with the Distance Race and the semis and finals for the Elite Technical races. The overall winner is based on finishes in both events. “I’m really excited for tomorrow,” said Anderson. 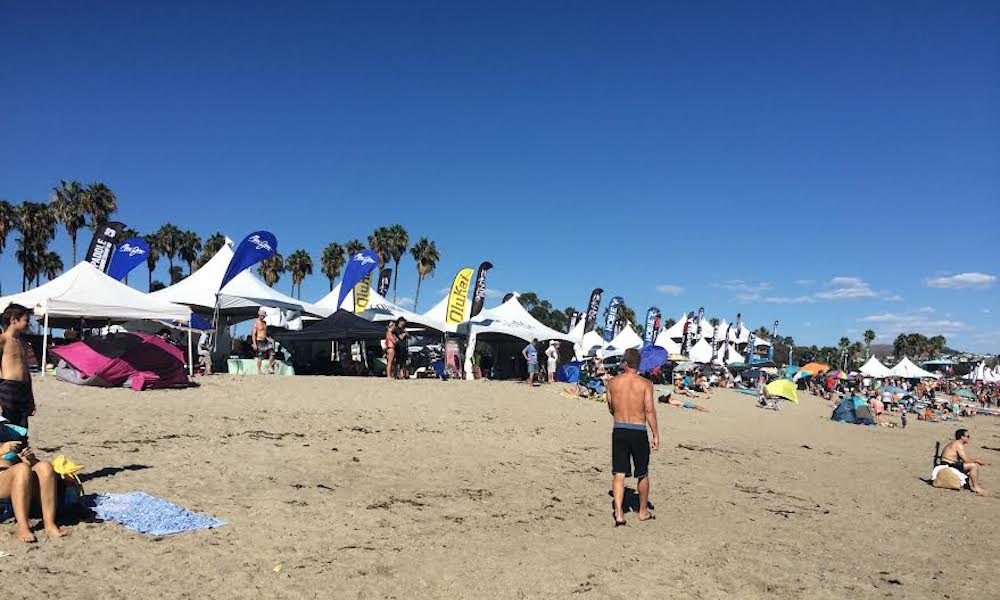 Tents lined the beach for the 2015 Pacific Paddle Games.

Tune in LIVE here and if you’re at the event, be sure to use the hashtag #PPG2015

To see more news and highlights for the Pacific Paddle Games here.

Salt Life is an authentic, aspirational and lifestyle brand that embraces those who love the ocean and everything associated with living the “Salt Life”. Founded in 2003 by four avid watermen from Jacksonville Beach, Florida, the Salt Life brand has widespread appeal with ocean enthusiasts worldwide. From fishing, diving and surfing, to beach fun and sun-soaked relaxation, the Salt Life brand says “I live the Salt Life”. From its first merchandise offerings in 2006, Salt Life has grown to more than $30 million in annual sales, with distribution in surf shops, specialty stores, department stores and sporting goods retailers. Saltlife.com

ABOUT TEN: THE ENTHUSIAST NETWORK