WRIGHTSVILLE BEACH, North Carolina - It normally takes me a week or two to recover from the SUP invasion that hits my home waters of Wrightsville Beach the latter half of April. But as someone who has been involved in this race since the beginning, I am certain that this was the best Carolina Cup ever! First and foremost were the conditions, which were the best I have ever seen for the Graveyard with light northwest winds and a 2-3 foot south swell. Secondly, the 15 - 20 person draft train that stayed intact for 8 miles through the inland portion of this course was a sight to behold. T2’s (Tituoan Puyo) final sprint was the stuff of legend and Annabel Anderson dominated this race like never before.

Carnage From the Start

The graveyard start was reminiscent of a demolition derby with 200 or so racers hitting the water as a 3 foot set rolled in. The word carnage comes to mind, or better yet just google the picture of one racer upside down at the start. The guy in the picture is a friend of mine known for riding 15-20 foot surf, so I asked him what happened and he said “I saw a $100 bill on the bottom.” But Chuck Glynn made it first to the start buoy and the pack headed north to Mason’s Inlet.

Katie Peters’ buoy placement at Mason’s Inlet this year was perfecto! She placed the buoy just north of the outside bar at the breakpoint between the newly dredged channel and the “Crocker Barrel” (the little inside left hander at Mason’s), which gave racers two choices. Choice 1 was to stay in the calmer waters of the channel, but buck a 1.5 – 2.0 knot outgoing current. This route was chosen mostly by those with limited ocean experience but still offered a challenge (pictured below). It was also fairly easy to pick out the wide eyed “Graveyard Virgins” as they rounded this buoy and saw that 300 – 400 yards of surf lay between them and anything resembling flatwater.

The big boys, however, saw the advantage of riding waves through the inlet, with little to no outgoing current. I know that I may sound a little biased, but if you’re gonna race the Graveyard, the ability to surf and read the water are a necessity. Take a look at the following picture; you have 8 of the world’s best taking off on the same wave. From my seat in the media boat it was not a coincidence that almost every one of these guys is either an OC Paddler or Surfer and that by the time the surf portion of the race was complete, Mo Freitas had a 50 yard lead on everyone.

The draft train this year was one of the biggest and baddest. | Chris McQuiston / Local Sessions Magazine

Once inshore of Mason’s a pack of 15 – 20 of the world’s best jockeyed for position through the entire 8 mile inland portion of the Graveyard. To give you some perspective, look at the athletes in the following photo, if that’s not one of the strongest and largest packs in race history, then I’ll kiss your @#$. This photo gives an even deeper meaning for an old Wrightsville Beach Local. Those buildings in the back of the picture are the condo’s that I grew up in and this body of water is Lee’s Cut, which is where I learned to waterski, freeboard, inshore fish and operate a small boat. To see these world class athletes come to my hometown and ply the same waters that I did as a youngster is something I cannot put a price on.

This pack was still largely intact until it rounded the north jetty at Masonboro Inlet, but after a near encounter with a fishing boat, Puyo, Ching and Grant broke away and began the last 1.5 mile sprint to the finish. But even after witnessing legendary sections of Mason’s Inlet and an all-time draft train, this race had one more thing to offer; NSP's Tituoan Puyo breaking away from Ching and Grant in the open ocean. T2 appeared to have an extra gear and he pulled away from two of the world’s best into a 10 knot headwind. The show of strength and endurance that T2 displayed in that final sprint was one of the most amazing things I have witnessed in this sport; especially considering the two guys giving chase. 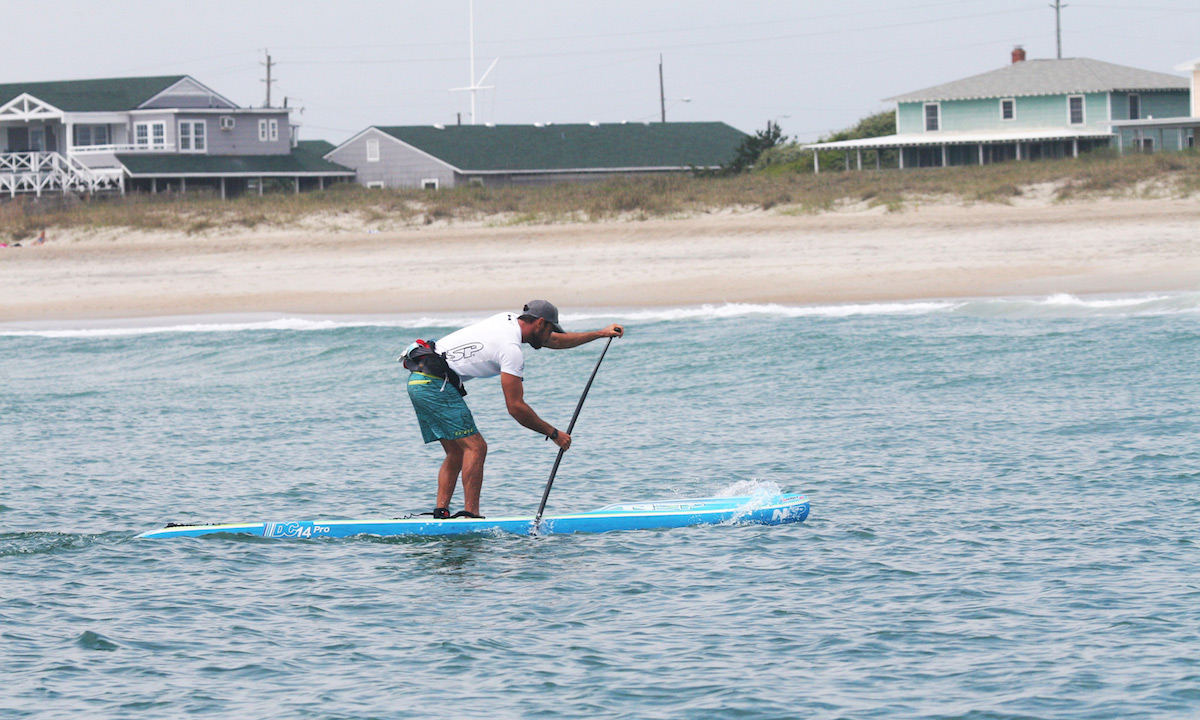 Annabel’s performance this year may have been the best ever by an athlete in this event. After a strong start and good downwind run to Mason’s I saw an improvement (if that’s possible) in Annabel’s game. Instead of rounding the inlet buoy and heading for the safer, but slower waters of the inlet channel, Annabelle turned hard left and headed for the Crocker Barrel (Page 1 photo, pink top, left side). She caught one of the outside sets and fell about halfway through the inlet. But instead of struggling in the slop, she hopped right back up on her board and caught the next set all the way through to the inside. At this point the race was effectively over, with more than 8 miles to go. Once inshore Annabel built an insurmountable lead without the benefit of any drafting partners, crossing the finish line more than 5 minutes ahead of Candice Appleby, Sonni Honscheid, Fiona Wylde and Terrene Black. 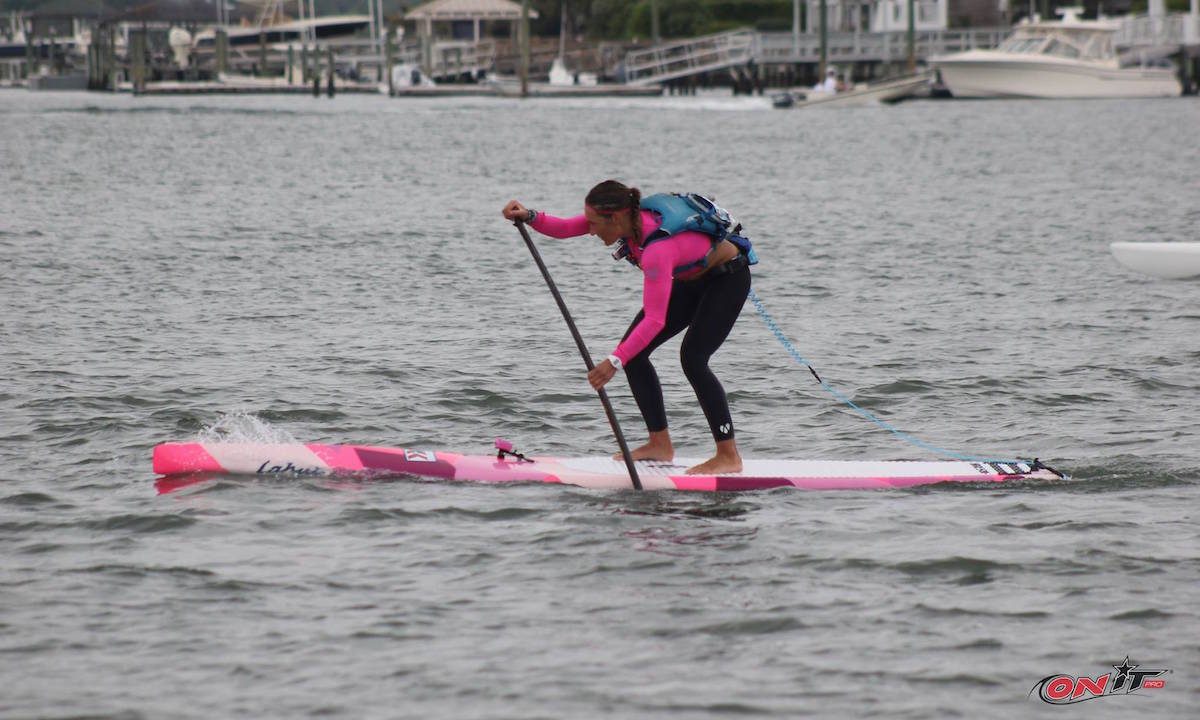 Annabel on her way to a dominating win. | Photo: OnitPro

The Graveyard Course was set up to reflect this area and its penchant for paddling and surfing. You can tire of the Waterman cliché or question its authenticity all that you want, but here are the facts; 7 of the Top 10 Women and 17 of the Top 20 Men are either surfers or OC paddlers, or both. But if that term offends you, feel free to call someone like Danny Ching a Surfing/OC Paddling/Downwinding/Flatwater/Standup Paddle Boarder.

OC fever has a firm grip on the Wrightsville Beach Area thanks to local heavies Jason Colclough and Reggie Barnes investing in six man’s and OC Legend Johnny Puakea making frequent trips to the area offering instruction to locals. In two years the number of OC’s in the Wrightsville Area has gone from two boats to almost 50 boats, with corresponding results. Locals Barry Blackburn, Eric Bigsby and Chris Sowden took the top three spots in the OC-1 category, while the teenage due of Harrison Deisroth/Anna Blackburn finished ahead of Rich Lambert and Steve Lewis in the OC-2 Category. The biggest surprise of the weekend, however, may have been when “Team Nobody” (Deisroth, Colclough, Sowden, Bigsby, Sanicholas and Ching) took on all comers and defeated everyone including one boat packed with names like Puyo, Terrel, Cain and Margetts.

To see more from the 2016 Carolina Cup, Click HERE.

More in this category: « The Benefit Of Stand Up Paddle Boarding For Kids Athlete Review: Vail Whitewater SUP Race Series »