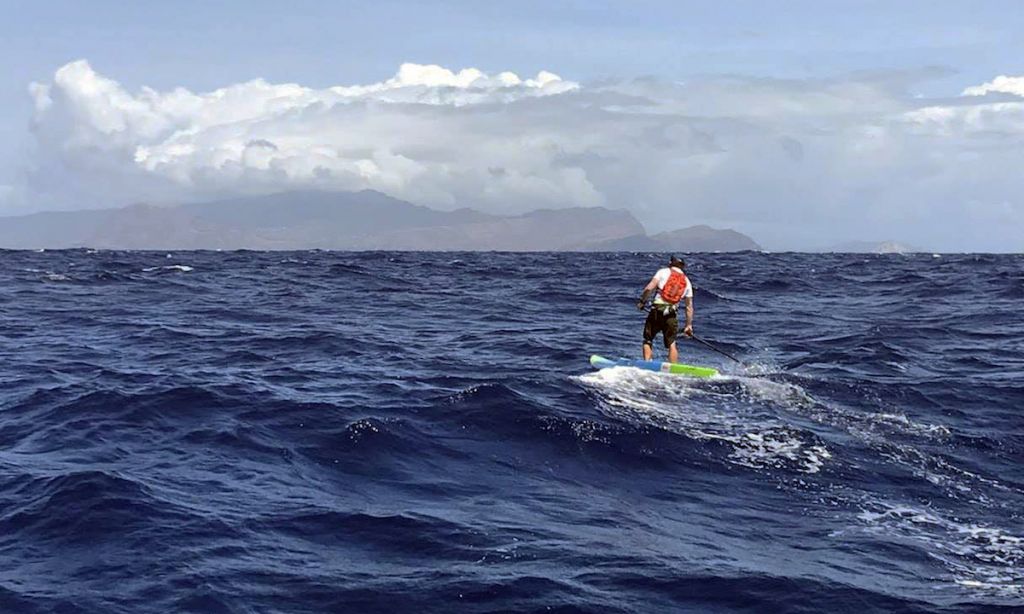 HONOLULU, Hawaii — At the start of the 22nd annual Molokaʻi-2-Oʻahu Paddleboard World Championships (M2O), presented by Kona Brewing, favorable winds appeared to be creating promising conditions for todayʻs racers, but the Kaʻiwi Channelʻs fickle personality created a puzzle board of mixed swell for athletes to navigate.

Australiaʻs Harriet Brown who claimed her second straight championship at M2O said, “At times it felt like we were going slower than if the channel was flat. Youʻd catch a runner and hit another bump, which made you feel like you weren’t catching anything.”

The 28-year-old Brown finished in 5 hours, 51 minutes, 32 seconds, about 37 minutes behind her record-setting performance last year.

Despite the less than desirable waves, those competing in the first-ever foil board division sliced through the water in what seemed like effortless flight as their boards glided just above the oceanʻs surface from bump to bump.

Kai Lenny, 25, who has won both the SUP stock and unlimited races at M2O, led a small group of foilers across the Molokaʻi Channel, finishing in blistering time of 2:52:58. His time is now the standard for this new division at the storied race. Lenny was reportedly clocked traveling at 15 to 18 knots at points during the race. Annie Reickert, 17, from Maui marked her crossing as the first and only woman to compete in the inaugural foil division, finishing in 5:20:06.

This yearʻs M2O also featured an icon from the professional surfing world. Two-time world champion John John Florence paddled in the two-person prone division with his teammate Kona Johnson. The two tackled the challenge in a time of 6:20:06

Florence, 25, said of his experience, “It was amazing, I had so much fun. I hope to come back and do it again next year.”

It was an all out Australian assault in the prone division in both the menʻs and womenʻs races.

Matt Bevilacqua, 26, claimed his fourth straight championship at M2O in a time of 5:05:27. Given his skill and experience, “Bevi” now holds the course record and has the second most wins behind his countryman Jamie Mitchellʻs impressive ten consecutive victories set between 2002 and 2011. Alex Wright, 21, was second in 5:12:45. Steward McLachlan finished third overall on a stock board against the faster unlimited racers to claim top honors in the stock race (5:33:26).

Lachie Lansdown, 22, could not catch the 30-year-old McLachlan in the closing miles and finished second in the stock race (5:37:56). Harrison Stone, 20, took the final podium spot among the stock paddlers in 5:49:17. Finishing closely behind Brown in the womenʻs unlimited prone race was Australian Lizzie Welborn. The 19-year-old finished in 5:56:19. The two women were evenly matched over the entire course, but Brown had the finishing strength to create a five-minute lead on Welborn in the final miles.

Maddie Spencer, 21, finished third in the unlimited race (6:18:32), after paddling in the stock race last year. Japanʻs Mao Kamimura won the womenʻs stock race in a time of 7:26:26 ahead of Australian Heli Murray who finished in 7:33:48.

Terrene Black is back on top at M2O after her win in the unlimited SUP race in 2013. The 34-year-old SUP veteran looked in excellent shape and had to prove it in a field of former champions. Blackʻs time of 5:27:27 was enough to fend off Germanyʻs Sonni Honscheid, 37, in todayʻs competition. Honscheid, who finished second in 5:32:36, won three consecutive M2O championships from 2014 to 2016. Last yearʻs champion Penelope Strickland from New Zealand finished third in 5:57:09.

Floridian Josh Riccio, 29 won the menʻs stock SUP race in a time 5:01:27. He finished fifth overall against a fast and deep unlimited field and nearly edged out Mauiʻs Kody Kerbox at the finish line. Vinnicius “Vinnie” Martins, 22, from Brazil was second and Japanʻs Takuji Araki was third. Their times are 5:24:25 and 5:27:52 respectively.

ABOUT THE MOLOKAʻI-2-OʻAHU PADDLEBOARD WORLD CHAMPIONSHIPS

Founded in 1997, M2O has grown from a grassroots challenge for the legendary lifeguards of Oʻahu to the premiere event in the sport of paddleboarding. The race annually crowns world champions in the two disciplines of traditional (prone) and stand-up (SUP) paddleboarding. In 2018, a hydrofoil division was added to welcome the evolution of technology in the SUP. Connecting the islands of Molokaʻi and Oʻahu, the 32-mile race crosses the Kaʻiwi Channel, also known as the Molokaʻi Channel and Channel of Bones. Men and women from more than 20 countries will face strong currents as they navigate the fastest downwind-route over one of the most beautiful and powerful channels in the world. Top athletes can complete the crossing in less than five hours, riding mid-channel waves that crest more than 12 feet and carry paddlers hundreds of meters. M2O starts in Kepuhi Bay on the northwest shore of Molokaʻi and finishes in Maunalua Bay on the southeast shore of Oʻahu. The annual race is a deeply personal experience, challenging every paddlers’ physical and mental endurance. Every finisher experiences an individual championship.