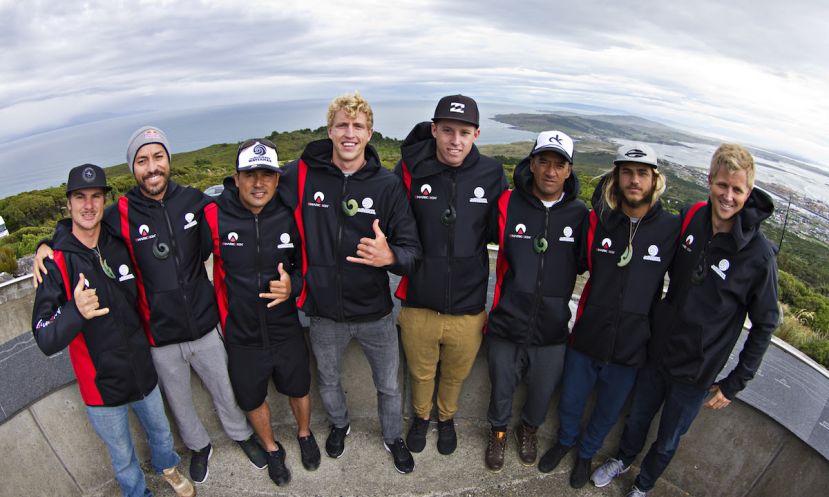 SOUTHLAND, New Zealand - Eight world-renowned international watermen were welcomed to Invercargill by Ngai Tahu tangata whenua today (Friday 31st March) marking the start of the 2017 Ultimate Waterman. The event is being staged at various locations within the Southland region of New Zealand over the next nine days.

The eight athletes invited to the event this year include three new faces - Coco Nogales (MEX), Jackson Maynard (AUS) and Chuck Glynn (USA). They stood, flanked by their opponents, as the local kaumatua presented them with a pounamu taonga (greenstone necklaces). Bluff Hill (Motupohue) was the welcome location but on Saturday, attention will be focussed on the ocean and the first of eight disciplines being contested – the Prone Paddleboard. The Prone Paddleboard Discipline requires athletes to either paddle on their knees or their stomachs with the total 6.0km distance neither a sprint nor an endurance race making tactical decisions crucial.

Athletes will complete four gruelling 1.5km laps in and out of the waves at Colac Bay, the race starting at 11am. Of all athletes, newcomer Australian Jackson Maynard has the strongest surf lifesaving background and he is expected to be a real force in the first discipline as he takes on the defending event champion Zane Schweitzer (HAW) who won this discipline in 2016.

The large storm that is tracking under Australia and heading to New Zealand is expected to bring large swells to the Southland region over the next four days. This will bring the coastline alive with options for the surfing disciplines to be completed.

Red Bull Media House will film the event for redbull.tv, taking The Ultimate Waterman and Southland’s stunning scenery to its huge global audience.

Red Bull TV is a global digital entertainment destination that features programming that is beyond the ordinary and is available anytime, anywhere and for free. Combining live events, an extensive On Demand library, and a ‘best of‘ stream showing selected highlights that span all programming genres, including live original sports, exclusive music festivals, original series, feature-length original films, documentaries and adventure, Red Bull TV offers an engaging viewing experience available anytime, anywhere online at redbull.tv, as an app, or via your Smart TV. More on: www.redbull.tv