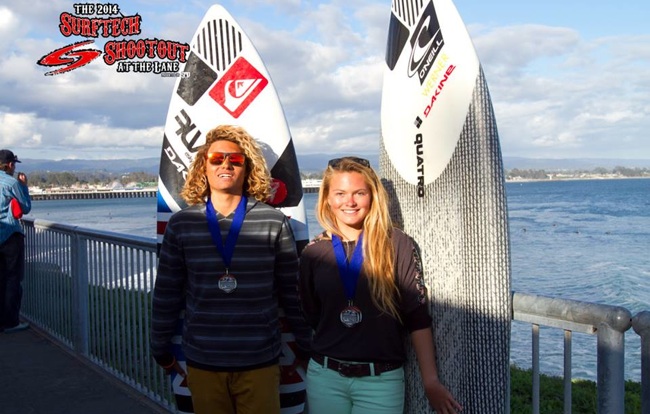 Trout and Hoesterey Take Out Duel Paddle Race
85 paddlers, both SUP and prone, plunged into the windy, bumpy waters off of Cowells Beach in Santa Cruz, CA for the 4th Annual Surftech Shootout Duel Paddle Race. Reigning Duel Paddle Race champion, Slater Trout (45:13) once again edged out Carlsbad's Chuck Glynn (45:24) to retain the title and push his 2014 race win streak to four in a row. In a surprising turn of events, stock prone paddler Jack Bark (Rancho Palos Verdes, CA) finished the race in third place over-all on his 12' Bark Commander prone paddleboard. Bark (45:42), finished just ahead of Ryan Helm (45:57) who was racing on a 12'6" SUP. Meanwhile Surftech/Bark team rider Morgan Hoesterey (55:25) took advantage of the rough conditions and paddled to a decisive victory over Fiona Wylde (59:05) for her first Duel Paddle Race win. 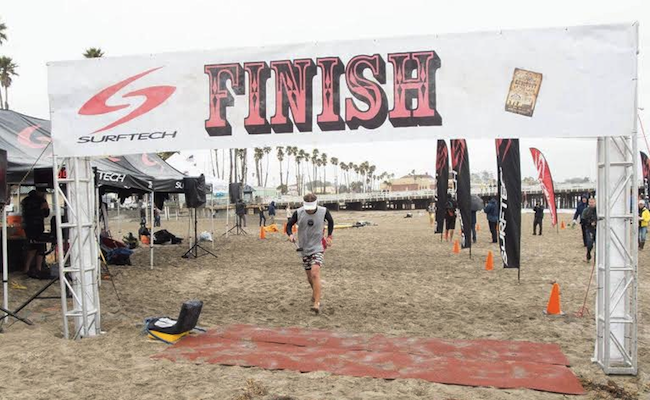 SUP Magazine thoroughly embraces the all-around water athlete aspect of the Shootout. So much so that they generously showed their support of this unique event by rewarding the top three male and female competitors in the Surftech Shootout and Duel Paddle Race combined with a $2,000 prize purse.

At the end of Saturday's race, it was Slater Trout and Morgan Hoesterey with the Over-all points lead going into Sunday's final day of surf competition. When Slater finished third in his semi final heat, it became clear after some number crunching that the over-all Men's title would go to Sayulita's Ryan Helm. Things were significantly closer on the women's side between Hoesterey and Wylde. When it was announced that Fiona had won the final, the two were tied and the tabulators would have to go back to both of their highest heat scores to determine a winner. In the end it was Wylde edging out Morgan for the over-all win. 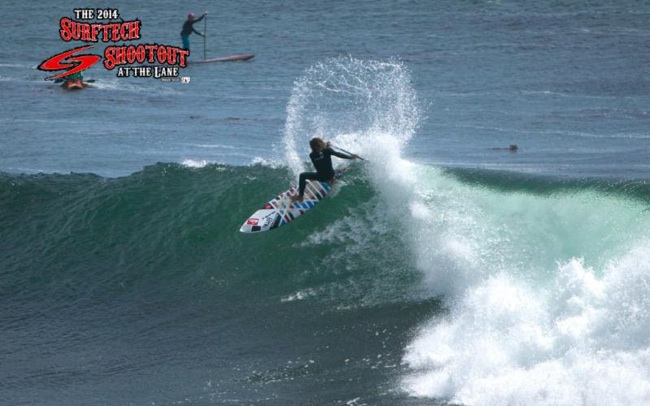 Ryan Helm and Fiona Wylde Finish Tops Over-all
SUP Magazine thoroughly embraces the all-around water athlete aspect of the Shootout. So much so that they generously showed their support of this unique event by rewarding the top three male and female competitors in the Surftech Shootout and Duel Paddle Race combined with a $2,000 prize purse.

"Stand Up Surfing and racing are two of my favorite things to do in the whole wide world, and being able to incorporate both of them into one event is a winner," said Fiona after learning that she had won the over-all title. "The Surftech Shootout provided epic but challenging conditions for a six mile race, and perfect six to eight foot glassy waves for the stand up surf contest at Steamer Lane! What could be better? Going into this event, I knew I was going to have fun no matter what, because of the opportunity to surf The Lane, and to win is an honor.

I want to say a big thank you to Surftech SUP for all the work they did to make this event a success, along with the lifeguards and water patrol for helping with water safety. Everybody from the organizers to the spectators made this event enjoyable for the athletes. The Surftech Shootout is definitely on my schedule for 2015!"

Surftech would like to thank everyone who had a hand in making the 2014 Surftech Shootout at the Lane, Cowells Classic and Duel Paddle Race a success! We look forward to seeing everyone next year!