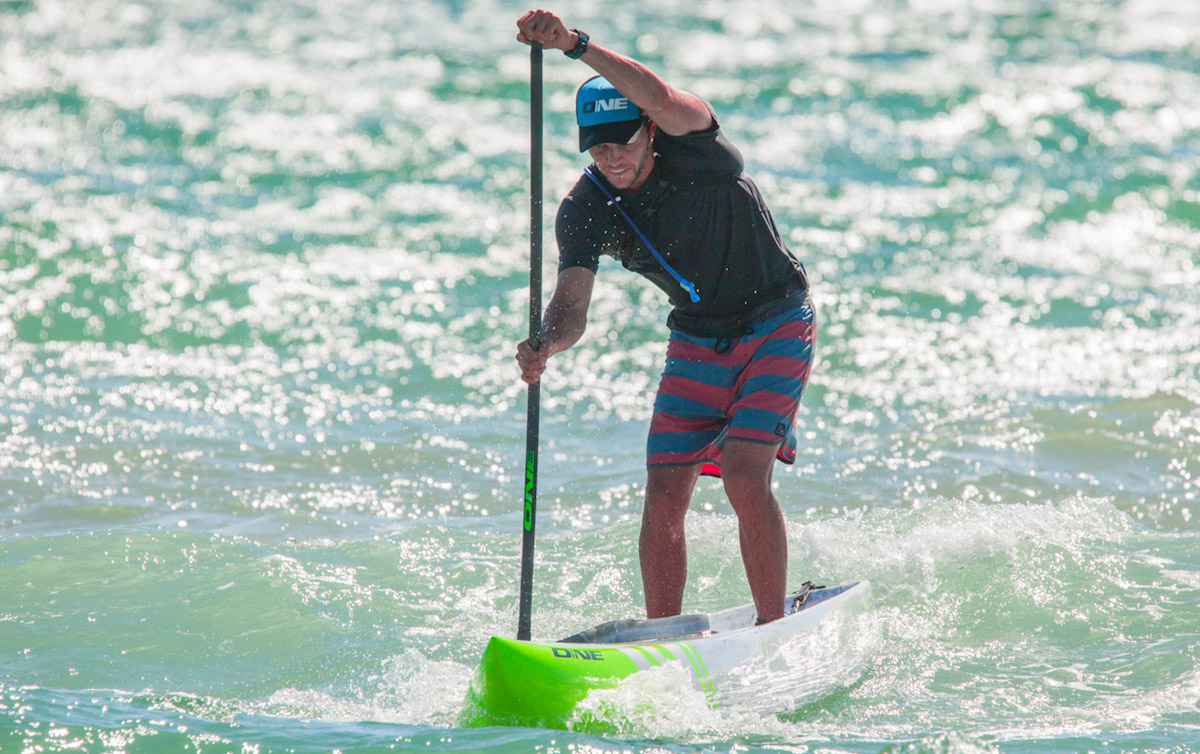 PERTH, Western Australia - Race records have been smashed at the sixth Stand Up Surf Shop King of the Cut with the fastest eight male competitors all beating the previous fastest time for the 24km downwind race in Mandurah, Western Australia over the weekend.

Jake Jenson from the Gold Coast won with a time of 1:41:14, smashing the previous record by over seven minutes. New Caledonia’s Titouan Puyo (NSP) finished second with 1:42:38 and from Sydney’s Northern Beaches James Casey finished third with 1:43:16. The previous race record was 1:48:21 set in 2015 by Matt Nottage.

Jenson said it was amazing to beat some of the world’s best SUP racers. “It’s amazing to finish first in a competitive field against guys like Travis [Grant], James [Casey] and Boothy [Michael Booth], and to win on my own board that our company ‘ONE’ developed is incredible,” the 22-year-old said.

“The conditions were the best, nice bumps, really fun. Anyone who’s thinking of coming to WA, do it!

“I’ve done four King of the Cut events and this is my first win - it feels great!” Jensen said. 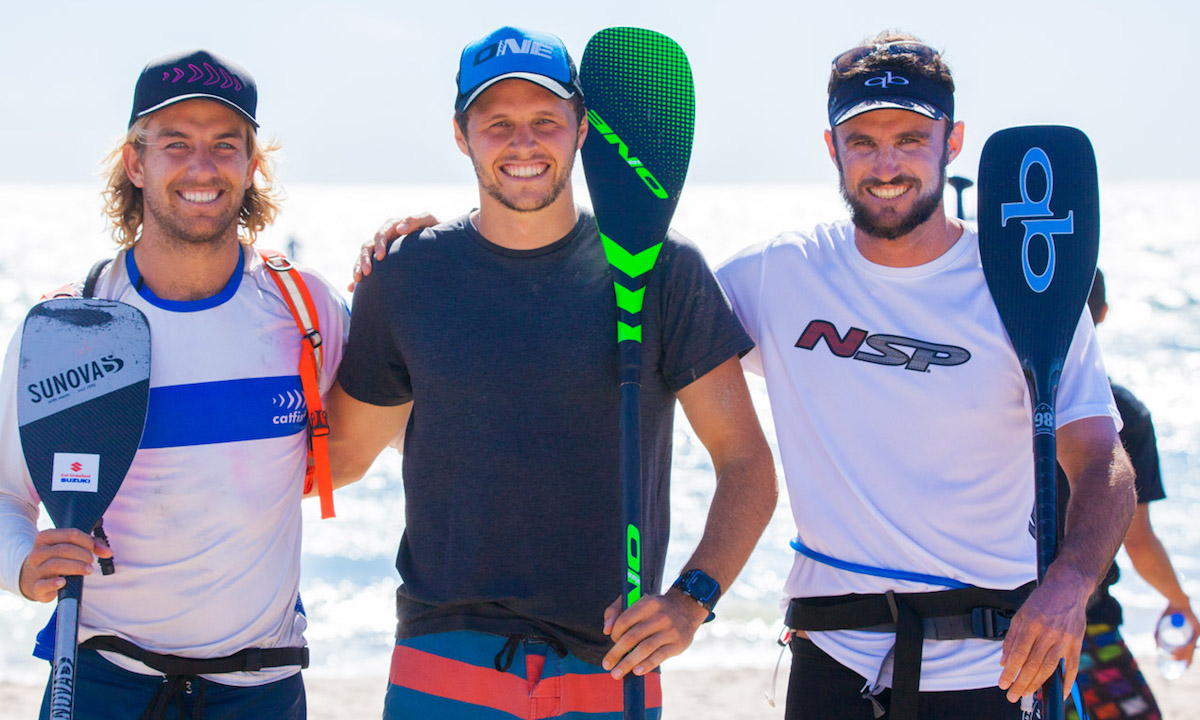 Titouan Puyo, 26, said he took the lead about ten minutes from the finish line after Jensen fell off his board. “I got in the lead and I was stoked, thinking I could win and then Jake just came past me and I couldn’t catch him. The same thing happened at the first race of the year in Queensland,” Puyo said.

“I’m very happy with second place, it was so much fun out there. It started off with light winds so that was hard paddling but then the wind picked up and the bumps got bigger and it was great. I even saw a dolphin and a penguin – I think it was a penguin. It was cool!”

James Casey, 26, said finishing third was an awesome result on the back of a win at The Doctor last weekend. “It’s always good in WA and I’m stoked with third, it’s my best result at the King of the Cut,” Casey said.

“I’ve tested new boards since I’ve been here, had a foil session which was awesome, I always have a good time when I come here.” 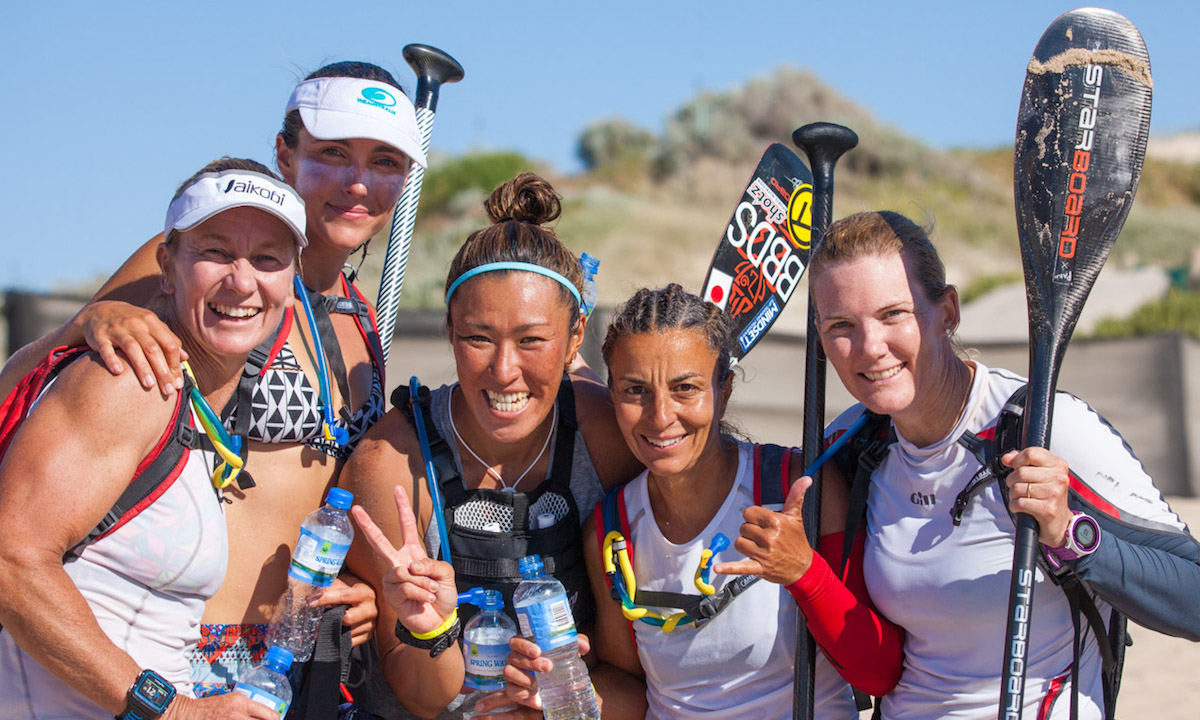 In the female pro class, Angela Jackson from Gold Coast smashed the race record and her personal best with 2:07:41. In second place was last year’s winner Karla Gilbert, a 7-time Ironman Champion from Queensland, crossing the line in 2:14:12. Third place went to Olympian Belinda Stowell Brett with a time of 2:21:23 and fourth to Japanese competitor Yuka Sato.

An elated Angela Jackson said she had a ball on her board from start to finish. “I’m stoked and I had so much fun out there catching bumps the whole way. The conditions just got better and better and I couldn’t be happier, especially winning on my ONE board,” Jackson said.

“I’d like to thank the King of the Cut organizers and congratulate them on offering equal prize money for male and female competitors, we train just as hard and I really appreciate it.” 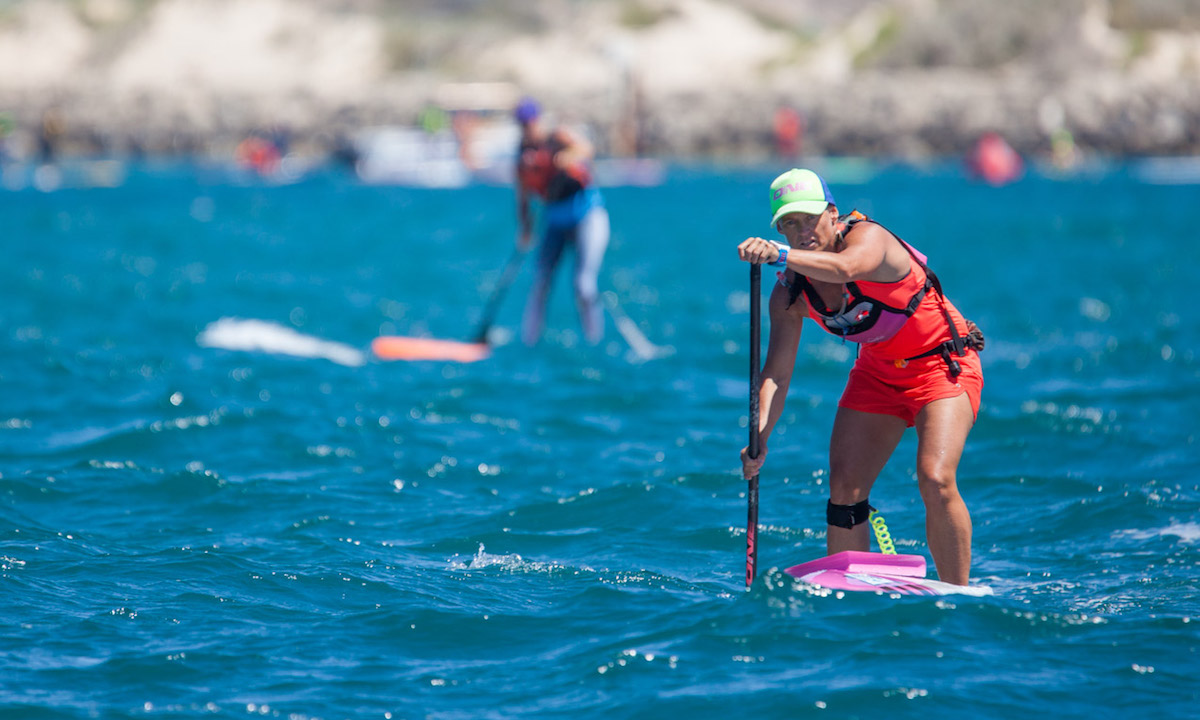 Stand Up Surf Shop King of the Cut Chairman Greg Kerr said the committee introduced equal prize money and a new race professional class for unlimited boards (any size), with the stock 14-foot board racers in their own class. “SUP is still a relatively new sport and it’s developing so fast, new board design, new paddling techniques, competitors skilled in all areas required for downwind SUP racing, as well as favorable winds, which have resulted in record times being achieved this year,” Kerr said.

“We listened to competitors and made adjustments such as introducing the unlimited class for male competitors, a separate class for the 14-footers, a 14-foot class for female professional competitors at their request as well as equal prize money for females which is an Australian first.”

In the 14-foot class, Queenslander Matt Nottage finished fastest with 1:48:08 ahead of Hawaiian and Hood River Gorge Champion Bernd Roediger (Naish) with 1:48:39. In an impressive performance, New Caledonian 15-year-old Noic Garioud finished in third with 1:53:04.

In near perfect conditions, winds started at 13 knots increasing to 16 knots as the race progressed which had competitors frothing as they crossed the finished line, many saying they had fun catching the bumps in the fantastic conditions.

The Duke of the Cut 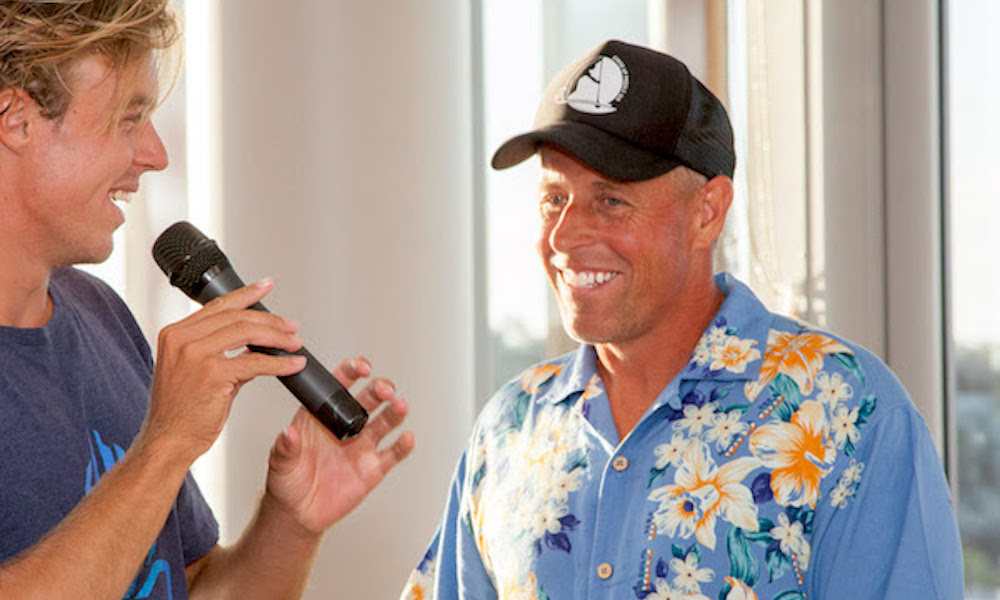 At the official trophy presentations, an inaugural award for embodying the spirit of SUP, named the Duke of the Cut after Duke Kahanamoku the Hawaiian legend who first demonstrated surfing in Sydney in 1915, was presented to Gordon ‘Stimo’ Stimson, President of SUPWA the sport’s governing body in Western Australia. ‘The Duke’ embodied the ‘aloha spirit’, the concept that to receive, one must also give, a perfect representation of the King of the Cut’s international community award.

Stimo never hesitates to lend a hand to SUP competitors, going out of his way to make visiting athletes feel welcome from storing their boards to letting them stay at his place and chauffeuring them to training sessions and more, always with a friendly smile. He’s also a respected athlete and SUP leader.

After presentations, competitors partied on at the Hawaiian Shirt Party celebrating the end of a terrific event and SUP season. 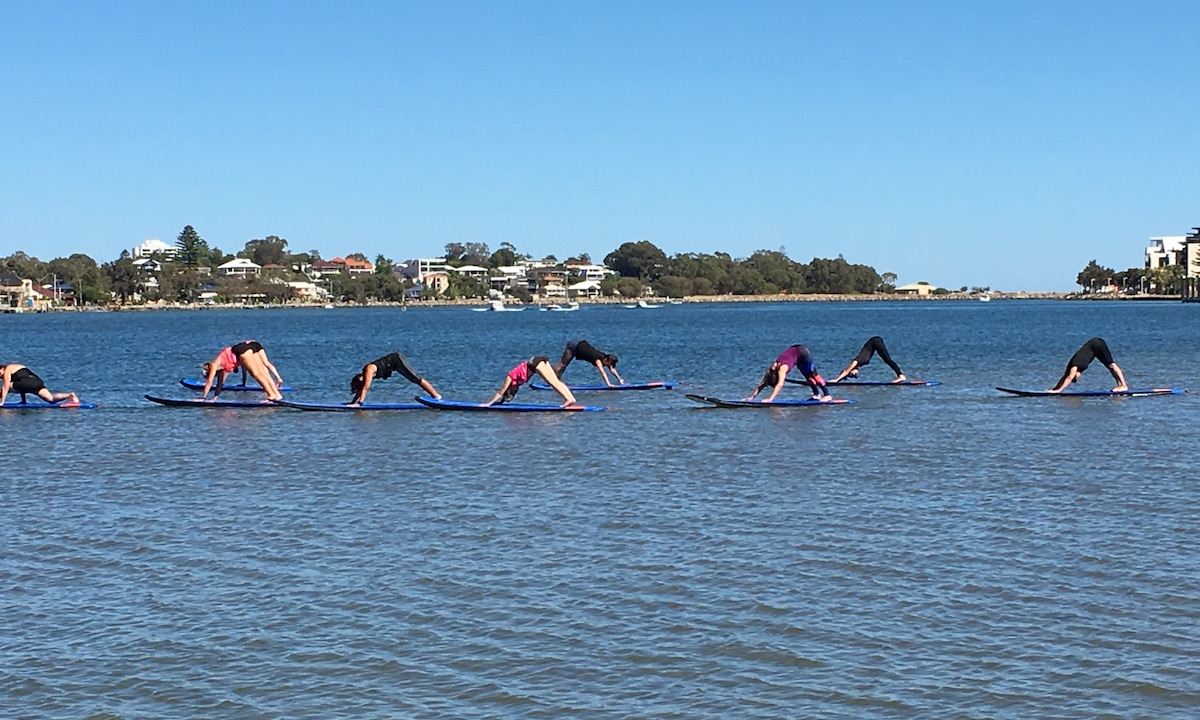 Organizers of the Stand Up Surf Shop King of the Cut added new events to the SUP festival this year, which began on Friday. About 40 paddlers enjoyed the social Express Two Storey Living Djeridjinap Run and SUPWA SUPer Clinic on Friday afternoon along on the protected waters of Mandurah Estuary with world champion Travis Grant giving tips on downwind technique. About half the participants were from Perth who stayed the night in Mandurah to limber up with SUP Yoga in the morning.

The Stand Up Surf Shop King of the Cut continues to grow, attracting an impressive field in its sixth edition including elite SUP competitors as well as first time downwind racers; the youngest competitor was 15-years-old and the eldest 64-years-old.

Full results of all classes available at HERE.