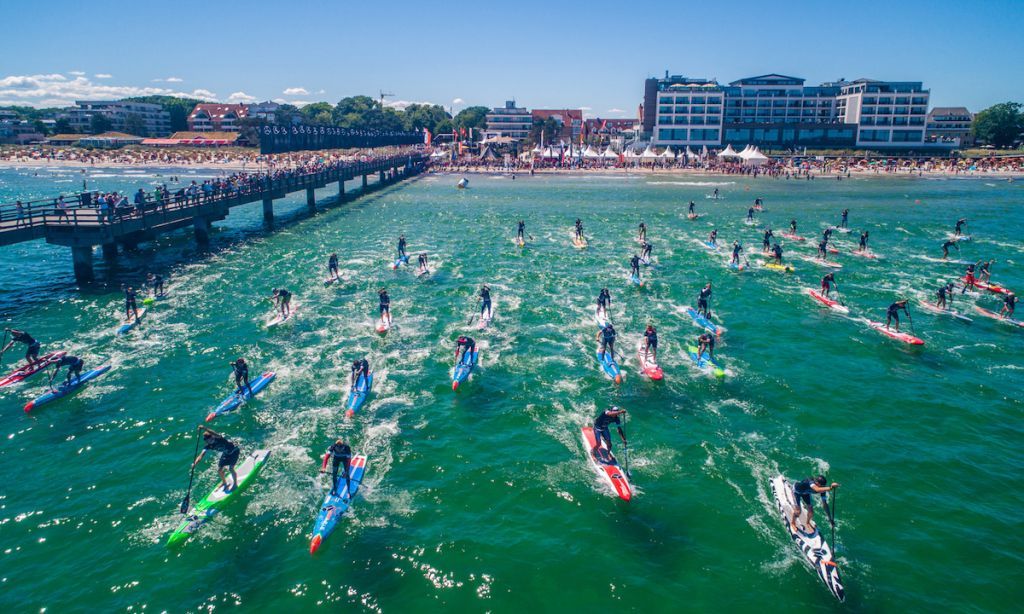 SCHARBEUTZ, Germany - After a frustrating week in Hossegor athletes traveled to Scharbeutz, Germany for a fresh start at the 2018 Mercedes-Benz SUP World Cup, the 7th stop of The Paddle League World Tour and week 9 of the EuroTour. This event was first held in Hamburg back in 2009 making it one of the world’s oldest races and is considered by athletes to be one of the most professionally organized events in the sport.

Paddlers from 26 nations were met with perfect weather in the seaside town of Scharbeutz this year all ready to battle for the top spot. Scharbeutz’s long pier creates a perfect amphitheater for spectators, which, combined with the amazing weather, produced a large crowd all weekend.

The elite race was a 10km course race featuring 6 laps, with a stiff ocean breeze giving competitors both downwind and headwind bumps on the longer stretches, which in turn made drafting difficult and produced big time gaps on the results sheet.

Stakes were high in the Women’s Elite Race as a victory for Sonni Honscheid would have clinched the inaugural Paddle League World Title in home waters, but Frenchwoman Olivia Piana wasn’t quite ready to let that happen.

After opening an early lead during the race Sonni looked set to claim victory with USA’s Seychelle Webster being the only woman who could match the pace being just a couple of board lengths behind on the opening two laps. Then lap three came around and Olivia found her rhythm and charged up into the virtual lead before pulling clear in the second half of the battle for a clear win.

Olivia eventually won by a minute, denying Sonni’s home crowd a national celebration but still receiving a big cheer from the fans. The difference came down to Olivia’s speed around the buoy turns and incredible ability to milk the tiny downwind bumps on the longer stretches.

Sonni was still supremely impressive in second and remains in the box seat to claim the World Title later in the season. Seychelle finished in the third spot looking strong with another podium that caps off a big European season for the American.

Another standout performer, Angie Jackson produced one of the performances of the day, coming back from a hectic start that caused confusion and left half a dozen women starting from the back of the field. Angie fought all the way up to fifth but was left to lament what could have been if the start had been clearer.

For the men’s race another incredibly strong field of athletes came together in Scharbeutz to create one of the most intense races we've seen in a long time. Despite the incredible talent on the start line, the two most in-form athletes of the season so far, Michael Booth and Lincoln Dews, opened up a gap almost immediately and were never caught. Over the next hour, the contest became an extraordinary arm-wrestle as the Australian duo battled side-by-side, stroke-for-stroke from buoy to buoy. There was an ever-present feeling that Michael Booth would eventually break clear, just as he's done almost every race this season, however Lincoln refused to give in and then turned the tables by making the first attacks in the second half of the contest. Lincoln eventually broke free in the small bumps on lap five before grinding out a tense final loop to claim his first major title, something that’s been a long time coming.

Victory was particularly sweet for the underdog considering he's been runner-up at the previous two Paddle League World tour stops at Bilbao and Hossegor. At the finish line it was clear that Lincoln had given it his all as he could barely talk at the finish line, calling it a “huge relief” to finally hit the top step of the podium. "It was an honor to race against Boothy, he's been the man to beat the past 12 months," said Lincoln.

Michael didn’t seem too bitter about his loss either as he humbly stated that "Lincoln paddled fantastic and was the best man on the day. I did everything I could but he just kept pulling away."

Behind the battle royale at the front of the field, Frenchman Arthur Arutkin raced solo virtually start to finish to claim a very impressive third place, while Hawaii’s Connor Baxter picked up another top five result that would be a delight to anyone else but wasn't the one he was looking for. Marcus Hansen continued to shed his dark horse status by rounding out the top five on a day when many established names finished outside the top 10 or even top 20.

Bruno Hasulyo continued showing his good form in varied conditions by claiming sixth, while consistent Frenchman Martin Vitry took 7th place for the fourth time this year. Georges Cronsteadt (8th), Noic Garioud (9th) and Josh Riccio (10th) all raced superbly and would have won most mid-level events with their performances--the fact they were only just inside the top 10 highlights just how strong the field is in Europe these days. Big names such as Mo Freitas and last year’s World Cup runner-up Casper Steinfath were left stranded outside the top 10 after an intense hour of racing.

The tight nature of the course, although sometimes confusing as the men's and women's fields overlapped (women have already been promised their own separate race at next year's event), produced some of the most exciting racing we've seen all season for the crowd on the beach, along the pier and watching online around the world. At one point, Sonni and Olivia were battling side-by-side just meters ahead of the duel between Lincoln and Boothy. 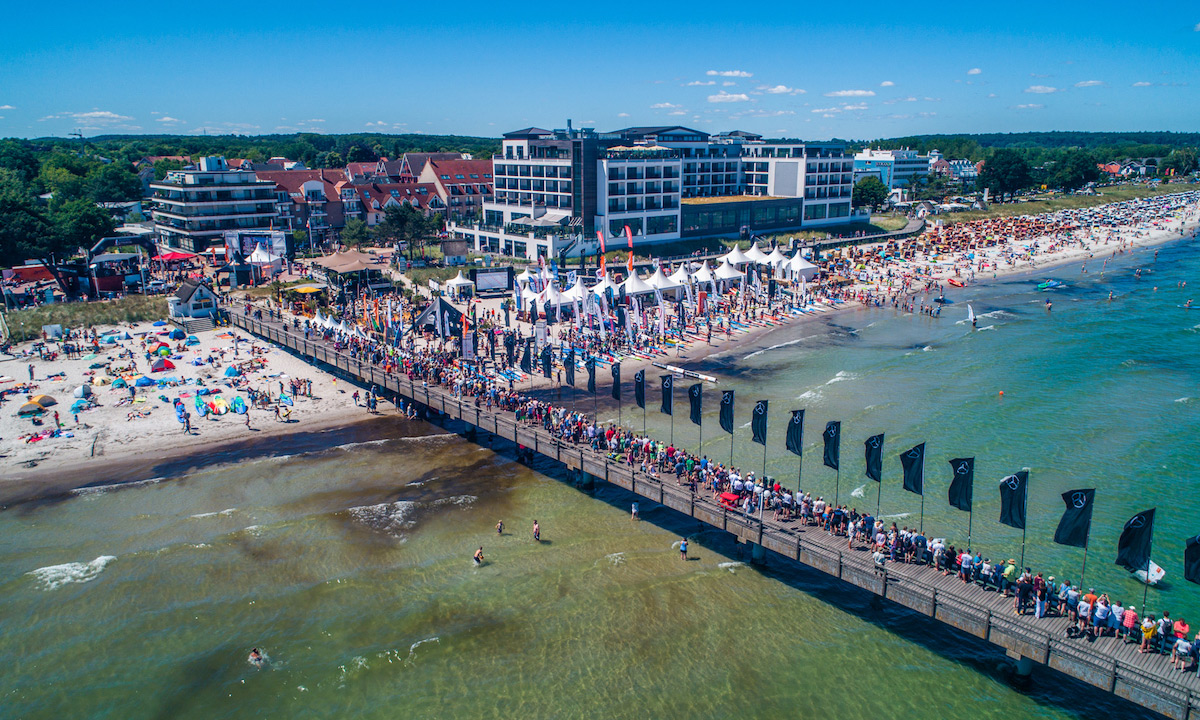