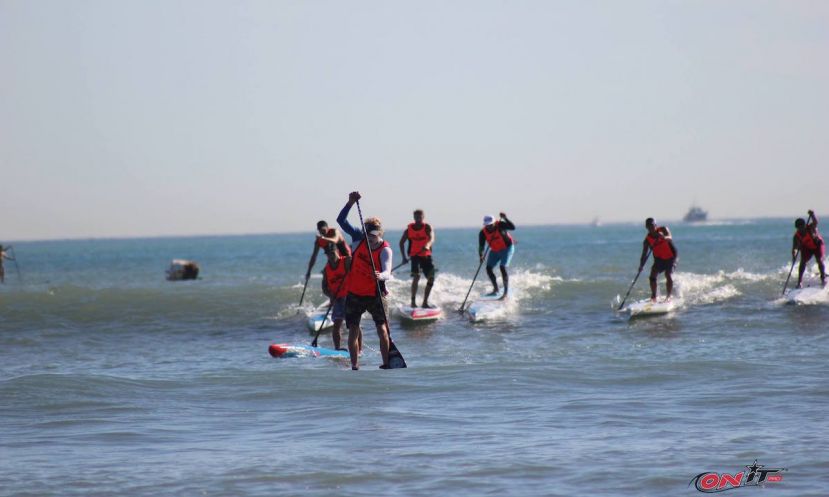 CARLSBAD, California – The second annual Pacific Paddle Games presented by Salt Life is shaping up to be the biggest paddle event of the year. In addition to a record-breaking $60,000 prize purse for Pros and the impressive West Marine Demo Zone, #PPG2016 will also host the Manufacturer’s Team Challenge. The MTC will pit industry brand teams against each other to compete for points with the four winning teams sharing in the bounty of $25,000 worth of print and digital advertising, in addition to bragging rights.

STARBOARD: One of the pre-eminent companies in standup paddling, Starboard started building windsurfing equipment some 20 years ago and transitioned into SUP in the early days of the sport. They continue to offer a diverse lineup of boards to paddling enthusiasts and their team of paddlers are some of the most recognizable in the world, including big names such as Izzi Gomez, Zane Schweitzer, Fiona Wylde and 2015 Pacific Paddle Games overall champion Connor Baxter.

RIVIERA PADDLESURF: A family-owned company based in San Clemente, California, Riviera Paddlesurf has been making boards for over a decade. The Rambo Family works hard to support the SUP industry by focusing on relationships with dealers, paddlers and of course, by making high-quality boards. As defending champions of the inaugural Manufacturer’s Team Challenge, look for the Riviera posse to make a strong statement in defending their title at #PPG2016.

HOBIE: As a brand, Hobie has changed the ocean-going world multiple times in its storied career, revolutionizing surfing, sailing and kayaking before adding SUP to the roster. The brand continues to be highly involved with the sea and SUP world both locally and internationally. With a diverse team consisting of strong ocean athletes, Hobie will be a contender for the Manufacturer’s Team Challenge in 2016.

INFINITY SUP: Infinity SUP’s roots reach back into the early days of surfing. Steve Boehne opened Infinity Surf in 1970 and got his sons Dan and Dave mowing foam early in their lives. Infinity has always prided themselves on making a variety of surf craft from longboards to wave skis to big-wave guns and of course, SUPs. Located right up the road from Doheny, Infinity will be right at home competing at Doheny for the Manufactuer’s Team Challenge trophy.

SIC MAUI: SIC Maui was built on a foundation of ding repair, sanding and wind-inspired sports by Dutchman-turned-Maui-resident Mark Raaphorst. Since Raaphorst shaped his first SUP in 2004, he’s honed his craft to the point where he makes some of the most prized boards in the standup paddling world. That growth has also garnered a team of some of the best athletes in the business, including Sonni Honscheid, Georges Cronsteadt and Lina Augaitis.

FOCUS SUP: Focus front-man Mo Freitas made a big splash at the first Pacific Paddle Games last year with his domination of the Men’s Elite Technical Final. Part of that equation was Freitas’ freakish talent, the other was the equipment under his feet. Focus SUP has been make high-quality SUPs since 2008 and continues to refine their equipment for both racing and SUP surfing. These boards work, period, so expect their team to make an impact at #PPG2016.

404: 404 was born from the team of Greg Jensen, a former pro surfer and shaper, and Danny Ching, a famed outrigger paddler and lifeguard, who would become one of the most recognizable men in SUP. Their brand 404 grew from there, focusing on high-end boards that performed. Their lime-green branding is now recognizable around the world at races, in the surf and anywhere that people paddle. Look for their international team to come out strong at #PPG2016.

SURFTECH: Surftech has been pioneering in the surfboard manufacturing game for over 25 years. They got into the SUP world with the same passion for innovation and have since built one of the most diverse lines of boards on the market offering shapes from names like NSP, Bark and Channel Islands. Their ocean lineage runs deep and so will their competitors in the Manufacturer’s Team Challenge.

The Team Challenge will include both men’s and women’s in Technical, Distance, Pro Junior and Prone categories. Each member of the team will compete for points, and the team with the most cumulative race points at the end of the weekend will take home the Manufacturer’s Team Challenge title, a two-page spread in SUP magazine and a digital ad campaign across SUPtheMag.com and GrindTV.com with a $10,000 value. Second place will win $7,500 ad value, third $5,000 ad value and fourth a $2,500 digital campaign.