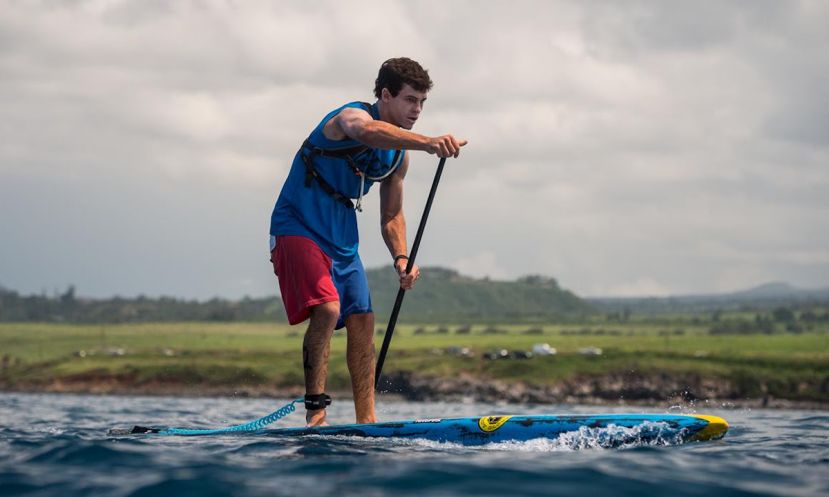 Mo Freitas on his way to an Overall victory at the Maui Pro-Am. | Photo Courtesy: APP World Tour

MAUI, Hawaii - World-class conditions aligned with the world’s fastest standup paddle racers for another paramount display of APP World Tour competition, as the first race event of 2017 got underway with the Day One Sprint Races at the Maui Pro-Am.

As the morning’s sun rose over Haleakala and filtered through the event scaffolding at Ho’okipa Beach Park, a laundry list of standup paddling’s biggest stars arrived to compete. The first race event of the APP World Tour stood to provide a litmus test for these competitors odds in the season to come. 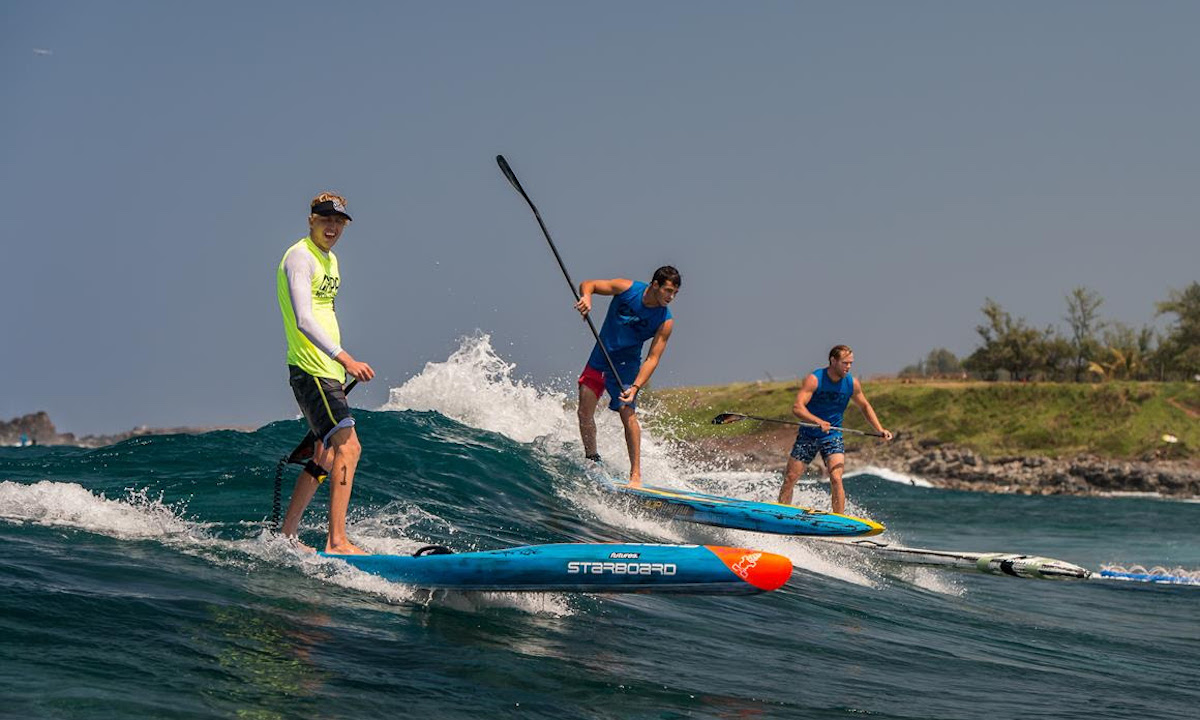 While the top three contenders from each Round One heat advanced directly to Round Three, the remaining athletes took to the Round Two repocharge for a second chance to advance. Along the way came a clash of the titans with fellow Starboard athletes, Italian champion Leonard Nika (Starboard) and rising Australian star Michael Booth (Starboard), tangling in the surf for what contest officials deemed an interference on the part of Nika. They resolved the dispute with a single-lap head-to-head heat, and in the end Nika came out ahead and advanced to Round Three. 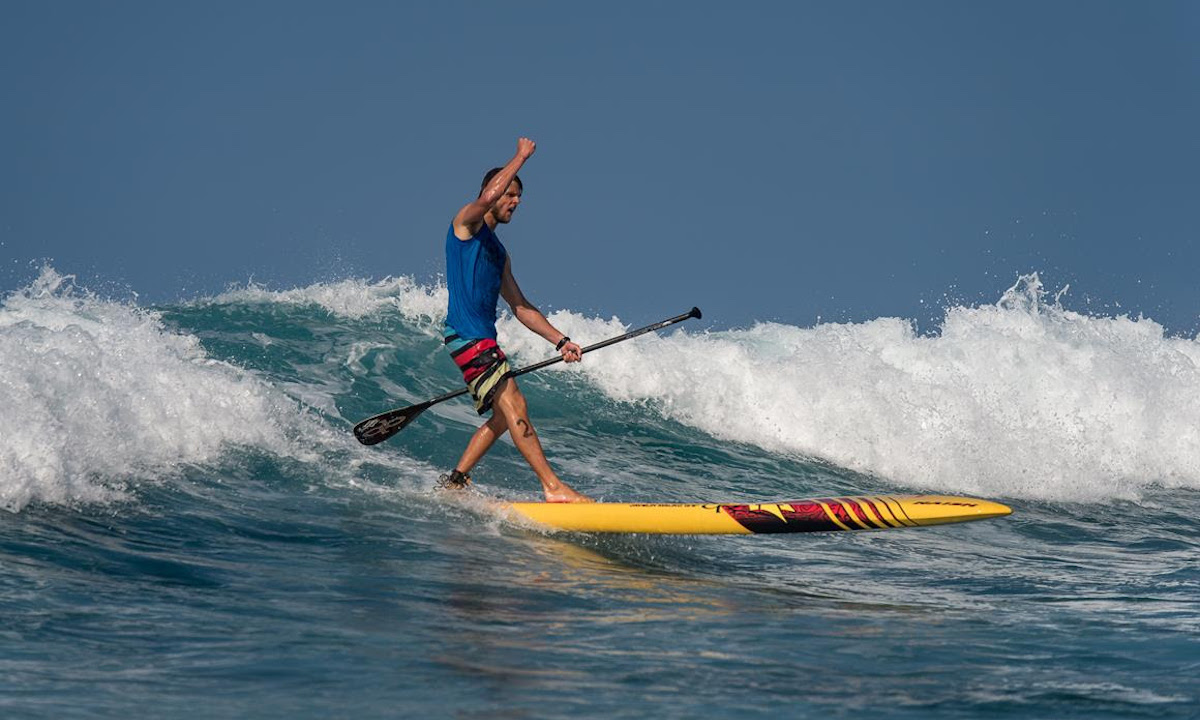 As the Men’s field narrowed through Round Three, the Semi-Finals staged the day’s dominant forces. Hawaiian favorites Mo Freitas and Connor Baxter (Starboard) met the Maui conditions with poise to take the top seeds going into the finals, while the likes of Travis Grant (NSP), Leonard Nika (Starboard), Matt Nottage (Starboard), Ryan Funk, Slater Trout and Lincoln Dews were relegated to the consolation final. The top two contenders of the consolation final—Dews (1st) and Grant (2nd)—advanced to the Final event of the Mens to battle it out with the day’s top male contenders.

The Mens final commenced with a tightly-matched selection of eight of the day’s fastest paddlers gunning off the start inside the surf line at Ho’okipa. Among them, the Danish Viking Casper Steinfath (Naish) took the lead ahead of Baxter and Freitas. Steinfath held his lead and muscled into a small bump after rounding the final buoy, surfing it to the finish for an overall victory for Day One, with Freitas finishing runner-up and Baxter claiming third-place for the day. 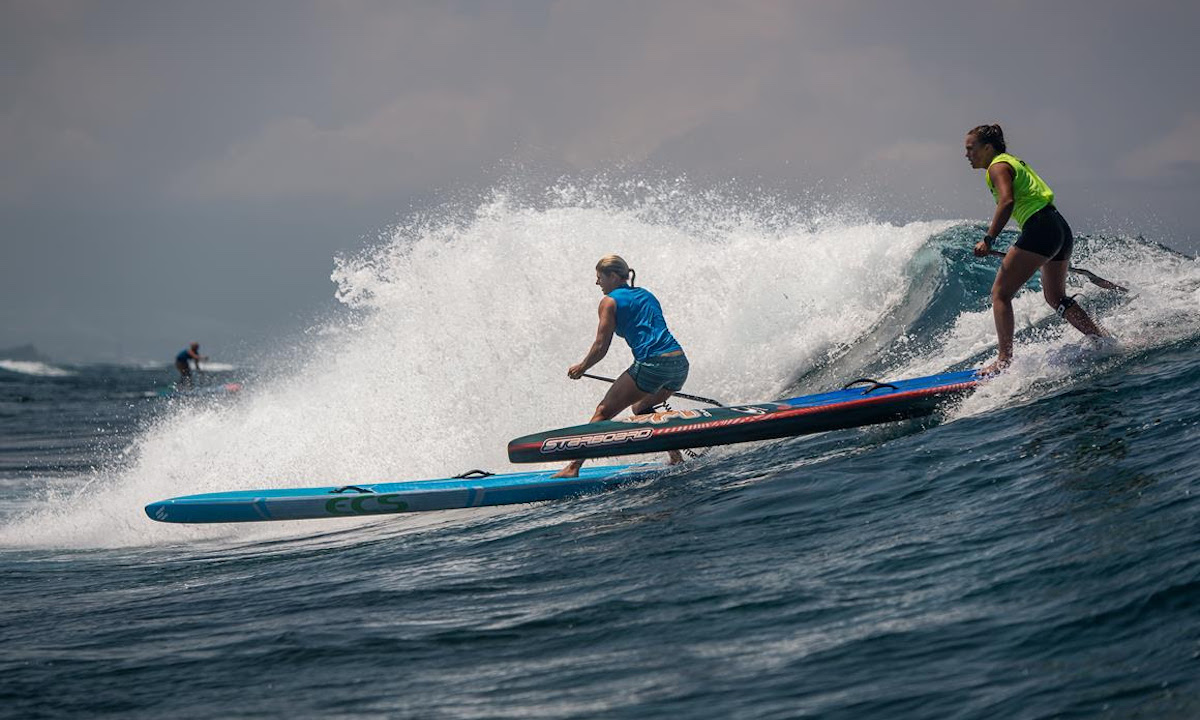 Then there were the women. With a stacked list of seven of the world’s best all jockeying for the top overall performance of three heats, it could have been anyone’s day. After two laps through the Ho’okipa surf, Australian powerhouse Terrene Black prevailed in Heat One with current racing world champion Fiona Wylde just behind.

In the women’s second heat, Fiona Wylde (Starboard) came out on top with Terrene in second. Meanwhile, perennial title contenders Candice Appleby and Sonni Hönscheid (Starboard) had a bit of a shocker in the sprint races with less desirable finishes.

Perhaps the most impressive underdog display came from Maui’s own Annie Reickert, the youngest women's contender in the field. She put her local knowledge to good use for a first-place finish in the third heat, but it wasn’t enough to take the overall victory. At the end of the day, Black finished as overall champion ahead of Annie Reickert for a commanding points lead going into Sunday’s Distance race on the fabled Maliko Run.

See highlights from day one in the video below. 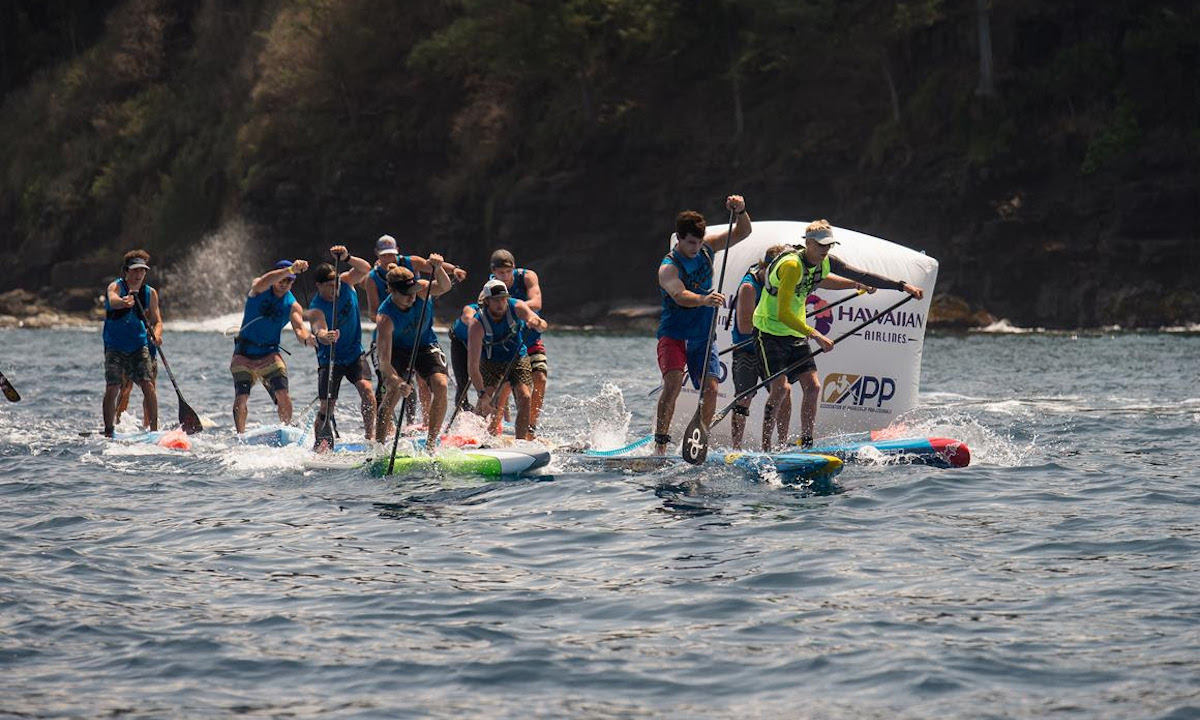 Action-Packed Sprint Races on Day One Set Stage for Maliko to Kanaha Distance Race and the culmination of the Maui Pro-Am. | Photo Courtesy: APP World Tour

The event kicked off on Sunday with flawless conditions greeting competitors for the sprint races at Ho’okipa Beach Park. The sport’s top athletes battled through two-lap heats in and out through head-high surf that held strong throughout the day, with standout performances coming from Denmark’s perpetual title contender Casper “The Viking” Steinfath and Australian surf star Terrene Black to earn them victories in the first event of the Maui Pro-Am.

Other highlights in the sprint races came from the star-studded Hawaiian contingent, representing their territory in stellar fashion with Mo Freitas and Connor Baxter taking home second and third in the men’s division respectively, and current racing world champion Fiona Wylde finishing third behind the youngest female contender in the bunch, 15-year-old Annie Reickert. 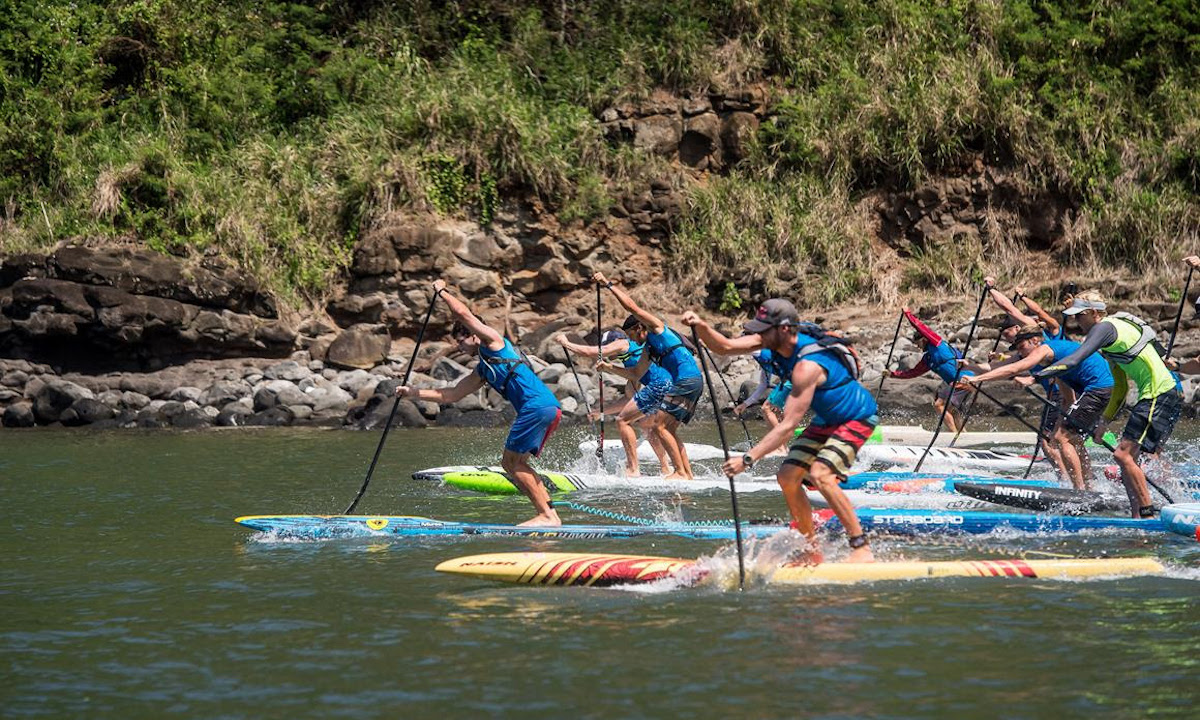 Day Two welcomed the second event of the Maui Pro-Am, an eight-mile distance race on Maui’s fabled Downwind Run from Maliko Gulch to the finish at Kanaha Beach Park. The day’s race was preceded by a youth Supsquatch race at Kanaha Beach, where the island’s community gathered to watch the future of the sport pile onto two massive inflatables with eight kids to a board for a race around an offshore buoy and back through the finish line at Kanaha.

By early afternoon, the excitement was peaking in Maliko Gulch as the APP World Tour athletes lined up for the start of the distance race. The Maliko run is widely known as the best downwind run on earth with the Maui trade winds supplying world-class conditions for bump riding.

However, today those trade winds were nowhere to be found, and as the contenders filed out of the Gulch into the open Pacific for the start hardly a whisper of wind was present to help propel them down the coast to Kanaha. These conditions made for an all-out flatwater endurance grind in sweltering heat, as well as an immaculate setting that showcased the incredible fitness of these paddlers as well as the pristine beauty of Maui. 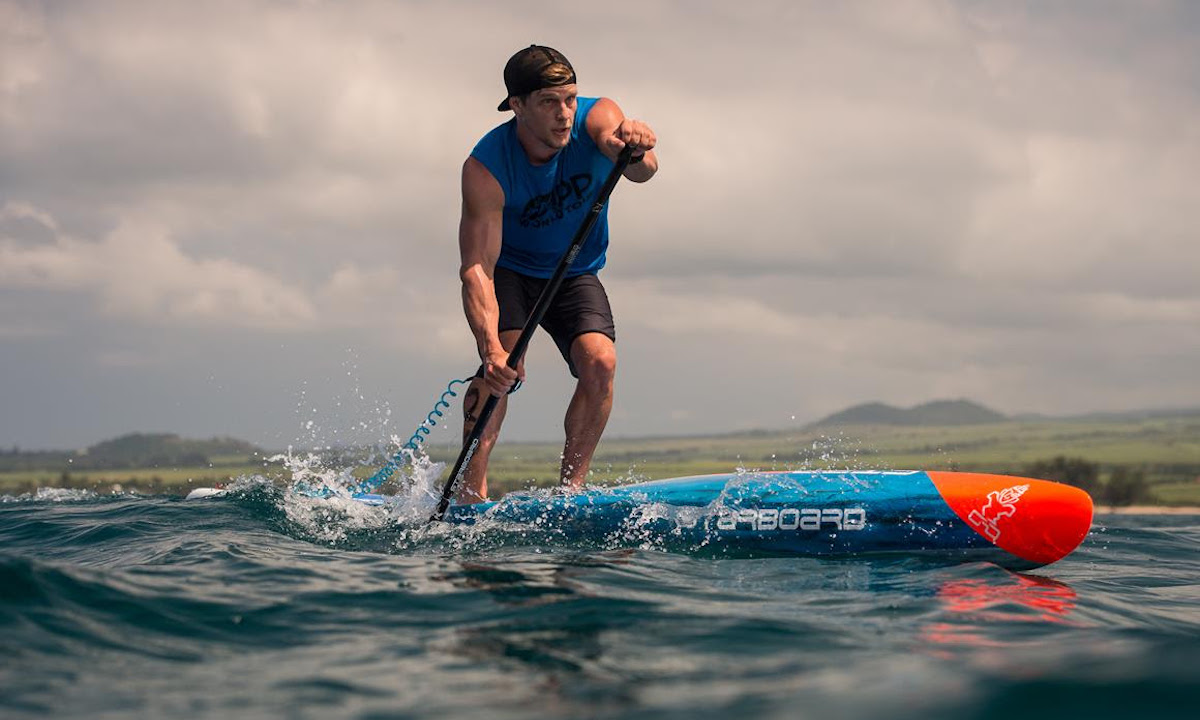 The performance of the day came from Australian dynamo Michael Booth, whose unparalleled athleticism inserted him at the lead of the pack from the start. Booth opted for an inside line and hugged the coastline in hopes of catching some bumps in the shallows.

Meanwhile, Maui favorite Connor Baxter assumed second position among the men with Mo Freitas close behind in 3rd, and that remained the hierarchy through to the finish. With Freitas finishing second in the sprints and third in the distance race, and Baxter finishing third in the sprints and second in the distance race, the tiebreaker came down to the increased points weighting of the sprint race, placing Freitas in the top position overall with Baxter runner-up.

Casper “The Viking” Steinfath filled out the last position on the overall podium, finishing seventh in the distance race following his first-place victory in Saturday’s sprint races. 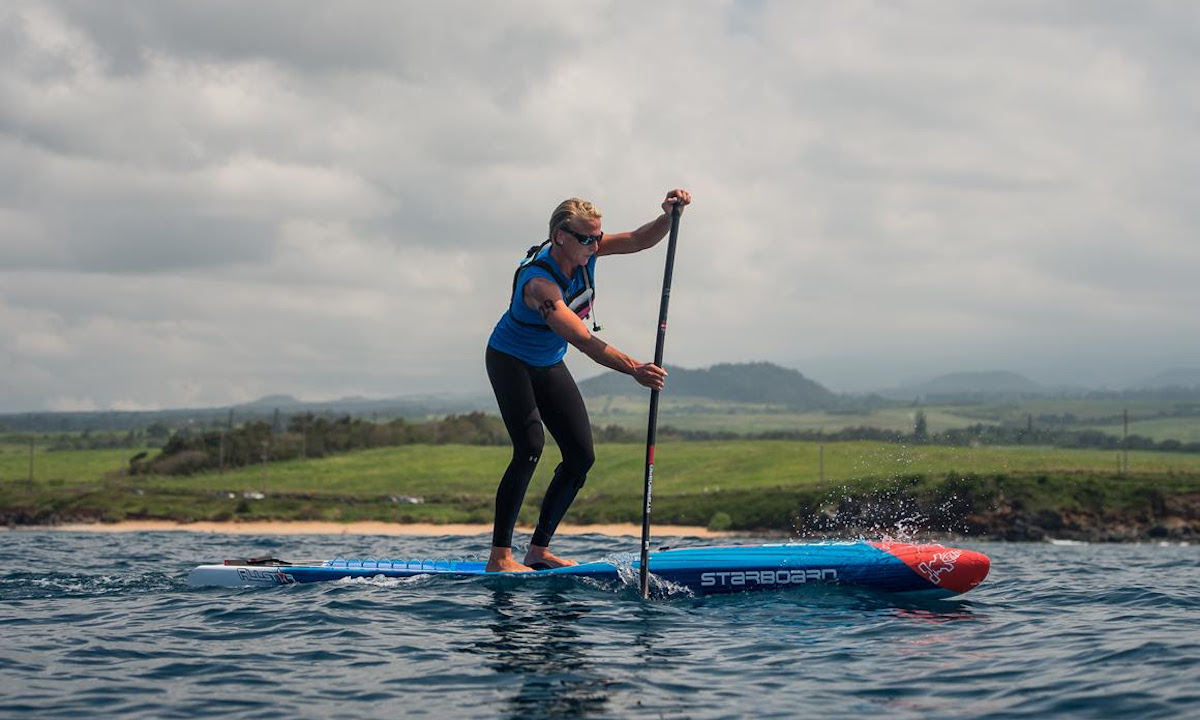 Among the women, three-time Molokai 2 Oahu champion Sonni Hönscheid got out ahead early in the glassy conditions and used her veteran knowledge and sheer strength to hold that position to the finish.

Behind her, Fiona Wylde (Werner Paddles) sported her yellow champion’s jersey in the second position for a well-earned runner-up finish in the women’s distance race. Saturday’s sprint race victor Terrene Black drove across the finish in third place for the top overall performance of the event, claiming the Maui Pro-Am overall title ahead of overall women’s second-place contender Fiona Wylde and third-place finisher Sonni Hönscheid.

The competition was then celebrated with an award ceremony at Kanaha Beach Park with complimentary food and a live musical performance from local diva Paula Fuga.

See highlights from the day below.

Make sure to check out the highlights, live recap and much more at www.appworldtour.com

The APP World Tour produces a complete inventory of programming, including live and post produced broadcasts from all its events, with distribution to over 100 countries worldwide via premier global networks such as CBS Sports Network and supported by IMG Media.