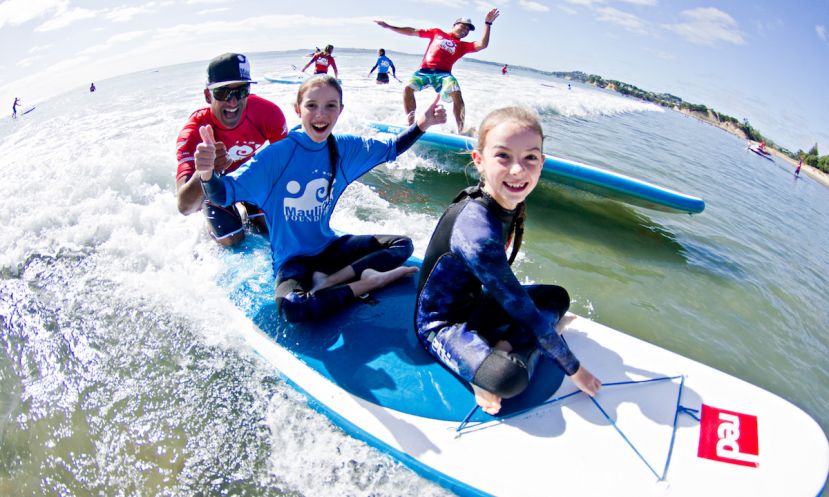 SOUTHLAND, New Zealand - Athletes will put preparation for the start of The Ultimate Waterman briefly on hold on Friday, March 31st, as they team up with Cystic Fibrosis New Zealand, the Mauli Ola Foundation from Hawaii, and the Southland Boardriders Club to offer a unique experience for children living with CF.

The eight Ultimate Waterman competitors will take a group of kids out on the water at Riverton Beach for surf lessons, harnessing the healing powers of the ocean and the excitement of trying surfing, some for the first time.

People with Cystic Fibrosis have been found to benefit from surfing as the salt water can loosen up the mucus in the lungs. A lot of people with CF inhale hypertonic saline using a nebuliser, a treatment the kids call “Salty”.

Last year, 10 kids with CF from the north of New Zealand got to experience a thrilling surf day and CFNZ Chief Executive Jane Bollard said they absolutely loved it.“The Ultimate Watermen were wonderful role models and since then many of the children have taken up surfing. We expect our young CF community in the South to have just as much fun this year,” she said.

After the surf lesson, the kids and their families will have a chance to spend more time with Watermen when they’re hosted for a BBQ. It will be the final bit of downtime for the athletes before competition begins.

The Ultimate Waterman competition starts on April 1 with the prone paddle-board at Colac Bay. It’s the first of seven disciplines to be contested by the eight watermen over nine days in the Southland region.

Red Bull Media House will produce five 10-minute shows, on location during The Ultimate Waterman, which will play on Red Bull TV’s daily Bullet Points show from April 6-10, as well as its social pages and You Tube channels.

To see more news and highlights from The Ultimate Waterman, click HERE.