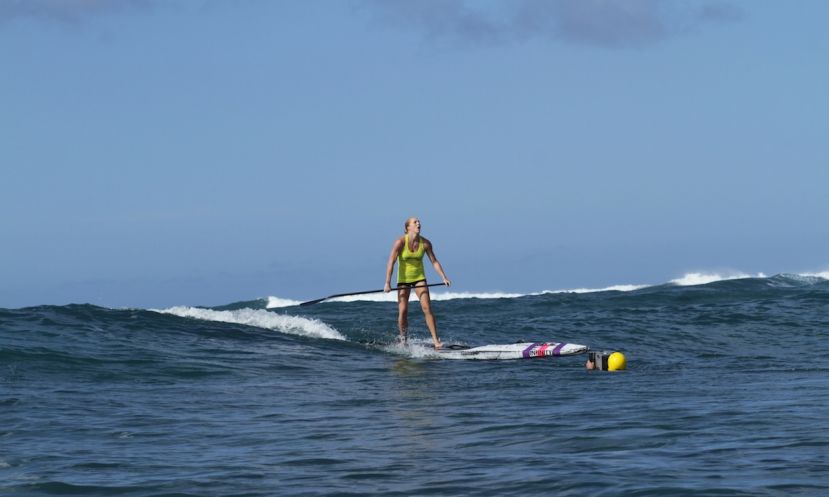 Candice Appleby (Infinity) is unstoppable after making it four wins from four on the 2015 Stand Up World Series. | Photo: Waterman League / Hank Photo

OAHU, Hawaii - After being crowned the 2015 #SUWS Women’s Champion at the US Open of SUP in Huntington Beach, Candice Appleby finished the season unbeaten after another win, but she had to work hard here in Hawaii after being pushed all the way by the rising young star Fiona Wylde. Fiona, who had won the Long Distance Race Saturday, put all the pressure on Candice who found enough to win the final two Heats in the Sprint racing to give her the Overall win by just 6 seconds.

It was Starboard and Werner Paddles athlete Fiona Wylde who took the win in Heat 1 forcing Candice Appleby to come out fighting in Heat 2. The Southern Californian certainly did that and her power and determination meant after she rounded the Final Buoy was able to drop into a bump alongside Fiona & Angie but crucially stay on her feet and surf her way all the way to the finish giving her the win by some distance. 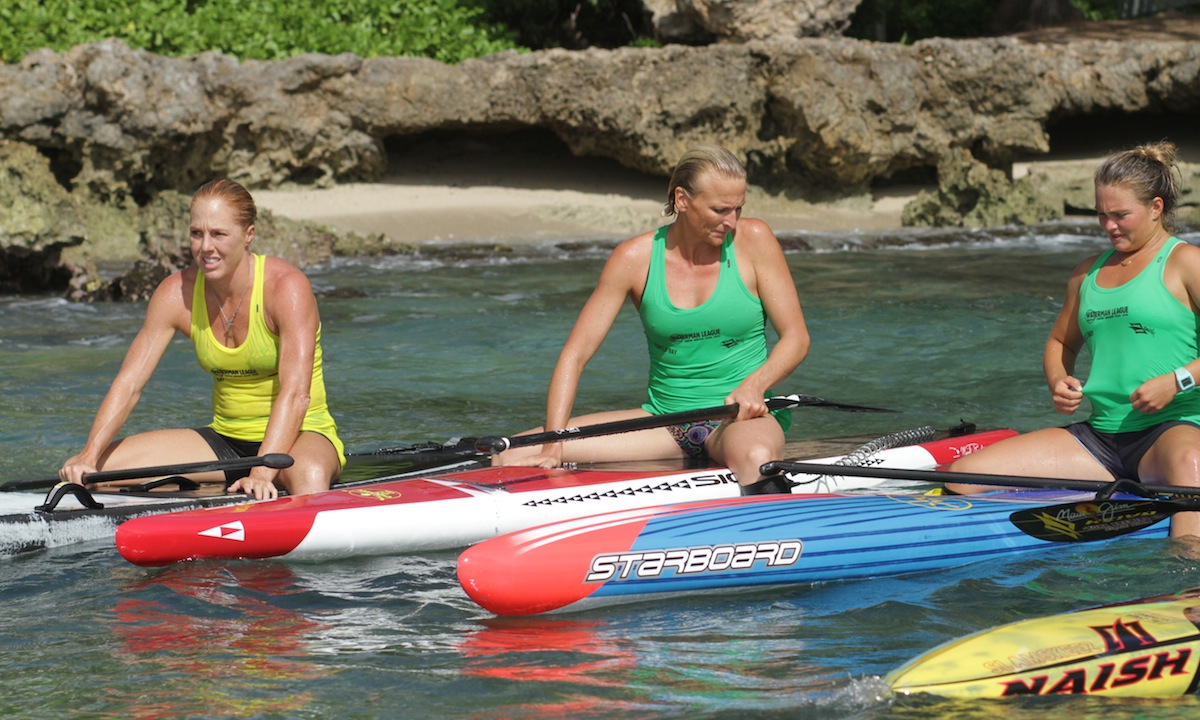 In Heat 3 Fiona took an early lead heading into Buoy 1 with Candice back in fifth place. Heading into the second buoy, Candice started to make her move and stroke by stroke she was able to claw her way back into the top pack with Fiona & Angie Jackson. Rounding the final buoy level with Fiona and Angie, Candice was the only one able to catch the first bump back toward the finish line and finish all guns blazing and power to the win. With the Overall Result calculated with the sprint and long distance courses measured comparatively, Fiona won the long distance by 8m38s, based on the average timing of the results, Candice won the Sprints by 8m44s giving her the win by just 6 seconds.

With Fiona winning the long distance race on Saturday and Candice winning the Springs on Sunday, the two ladies were in a tie for the overall win, but due to a count back on the timing, it was Candice who was able to come on top with the overall win for the final event of the season. 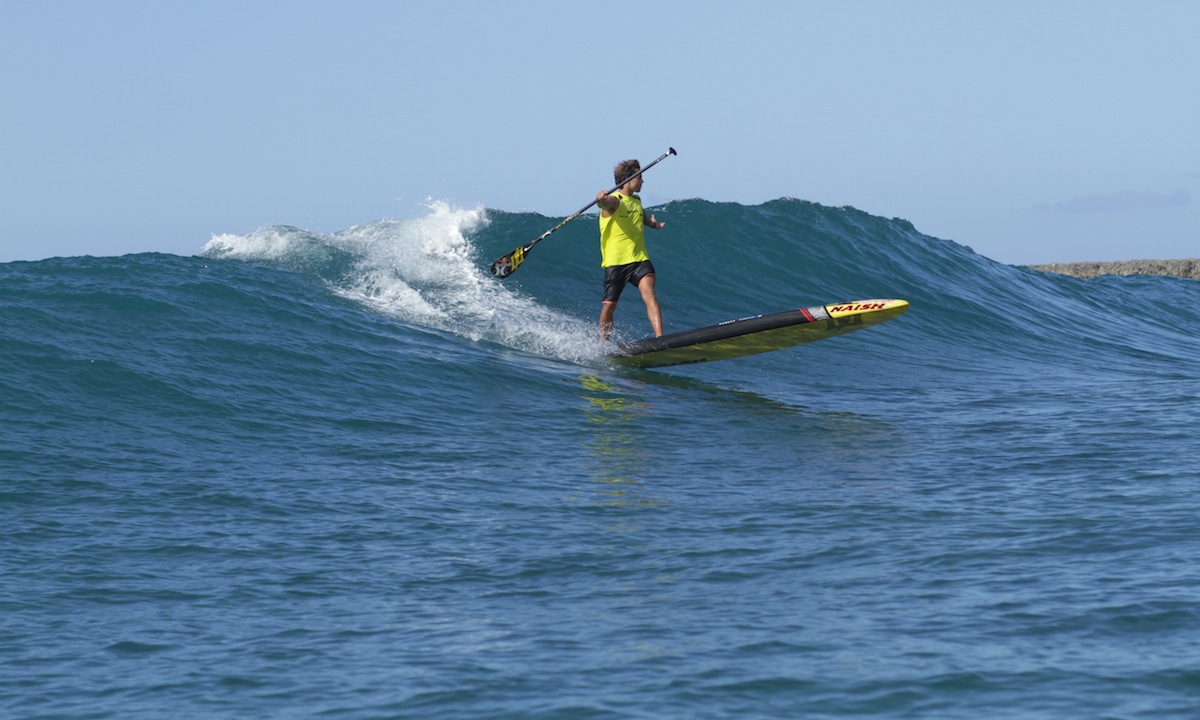 For the men, it was ratings leader Kai Lenny (Naish), who was able to secure his third #SUWS Title after winning Stop #4 on the 2015 World Series with a win in the Sprint racing in a climatic finish at Turtle Bay Resort. With Starboard SUP's Connor Baxter putting all the pressure on by winning the Long Distance on Day 1, Kai needed to be in top form to secure his Seventh World Title (3x Stand Up World Series Racing & 4x Stand Up World Tour Surfing). With 2-3 foot surf making for some interesting Sprint Racing, The twenty-three year-old Hawaiian stormed into a lead right from the start. Winning Round 1, Heat 1 easily, he went straight into Semi-Final 1 where once again he powered off the start line and into a comfortable lead and straight into the Final. 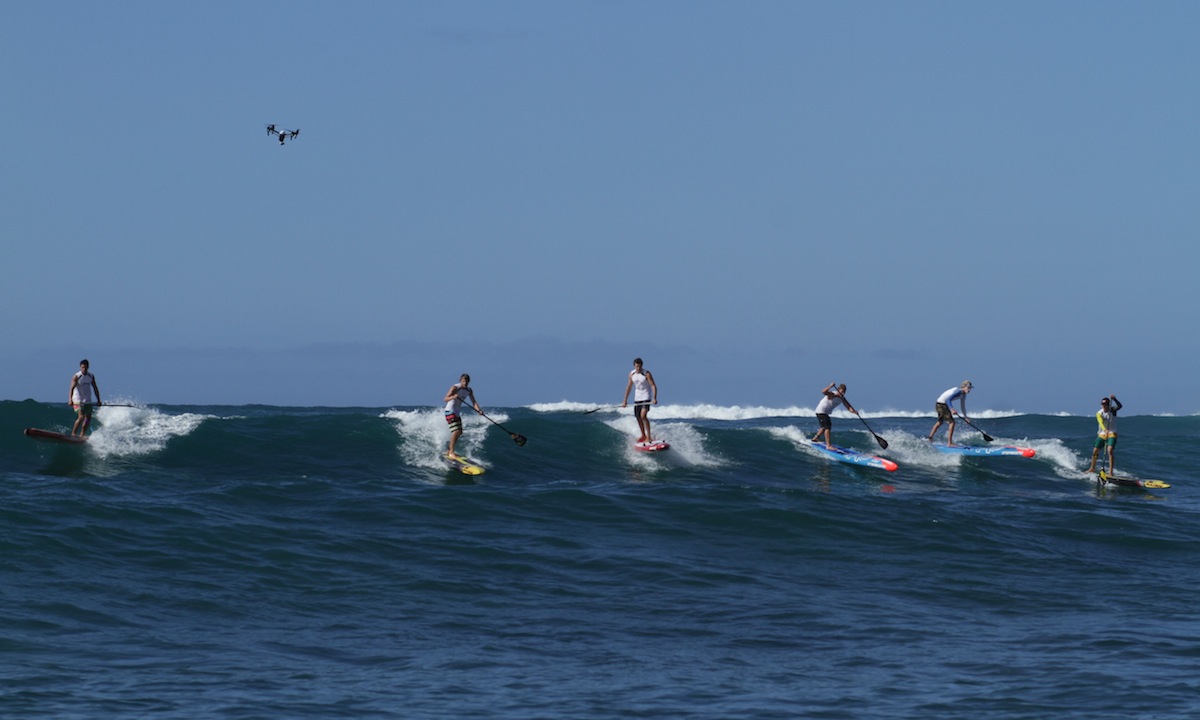 Up against some of the World’s Best paddlers in the Final it was neck and neck straight from the starting horn with Naish teammate Casper Steinfath. The Naish riders seeming to find another gear and storm out in front. Hitting the Buoy 1 first, Kai was able to find a small bump from the Outside Buoy and extend his lead from Casper. The Final saw the athletes having to complete two laps of the Turtle Bay Course and with Casper Steinfath falling on the way back out for the start of the second lap, it left Kai Lenny to complete his final lap unchallenged and win by a considerable distance. With Casper being overtaken by the chasing pack it was Kody Kerbox, who impressed all day with his skill at finding bumps to come from behind and secure second place being pushed by Bullet Obra and Jake Jensen with Connor Baxter and Zane Schweitzer further back going down on the wave after they rounded the Final Buoy. 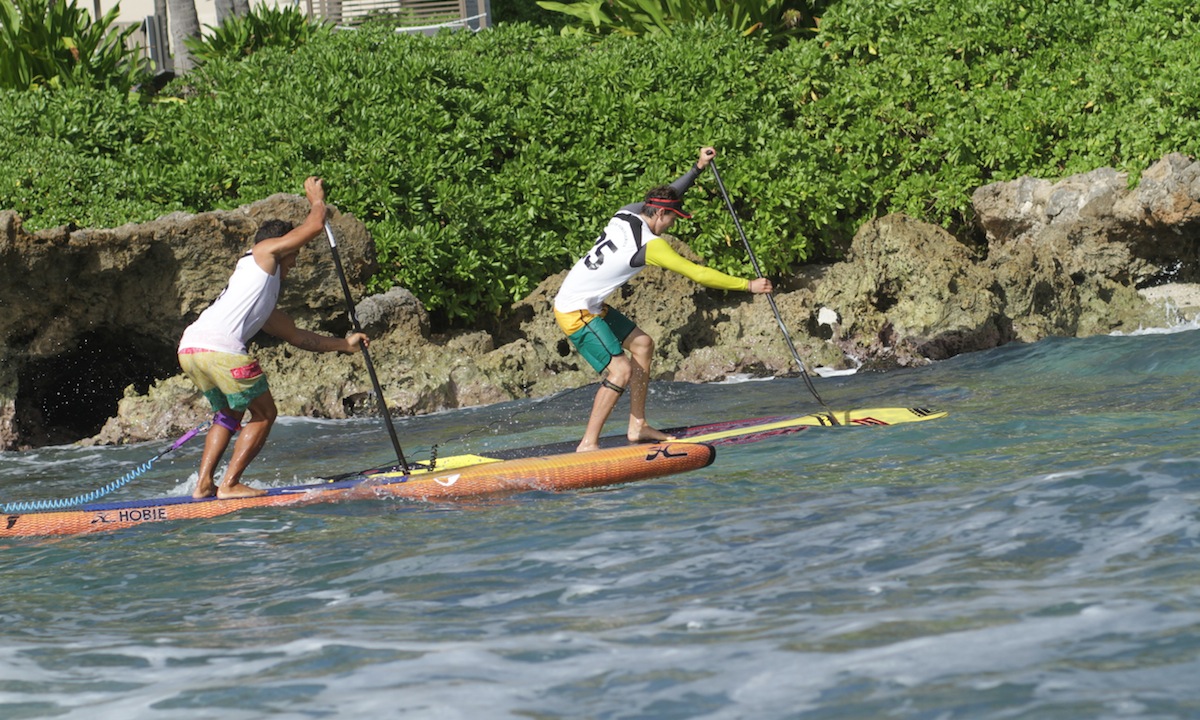 Stay tuned for the full recap of the event and video highlights coming soon!

To see more news and highlights from the 2015 Stand Up World Series, Click HERE. 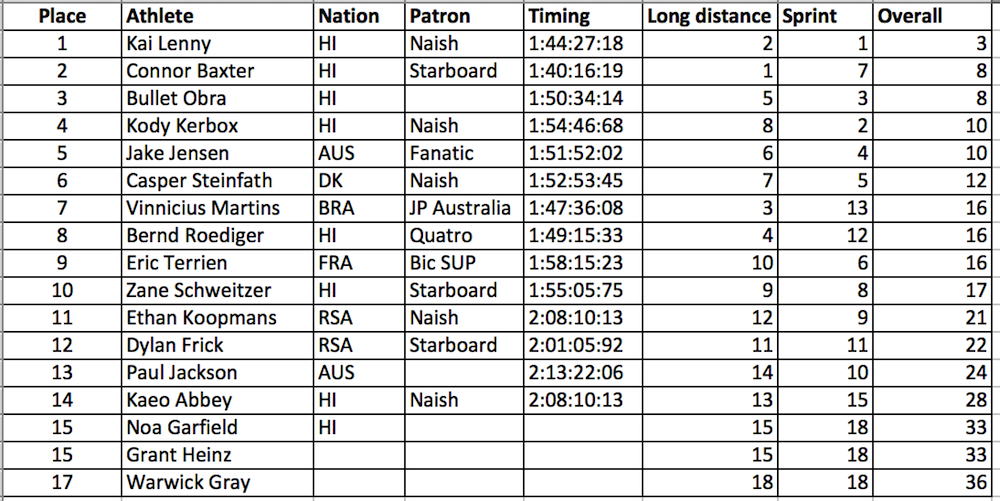 More in this category: « Baxter & Wylde Win Long Distance Races At World Series Finals Connor Baxter Weighs In On His Win At The 2015 Pacific Paddle Games »