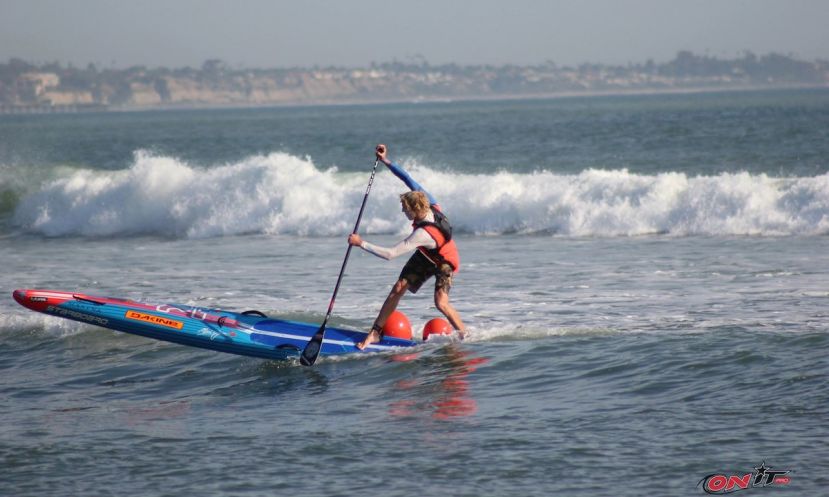 Words by Connor Baxter, all photos courtesy of Onit Pro.

DANA POINT, California - The 2015 Pacific Paddle Games was one of the biggest, craziest and the most stacked field of athletes I have ever competed against. The first day kicked off with the first round of the technical race, which was four rounds of 25 people. And the top athletes made it straight to the semi-final round. The losers went into a repecharge round - and the winners of the repecharge would go to the semi-finals.

Right from the first heat the gas was on to make sure I was in the top ten that made it directly to the semifinals. I was in first pretty much the entire heat, but I tried to pace myself as best as I could, so I had enough energy for the next heat. I came in 2nd place behind Noa Hopper with my new favorite board - the 2016 14' Allstar. As soon as I hit the beach, I got water and some Hammer nutrition pills in me and found some shade under the Starboard tent with the rest of the team. I waited around for awhile and they ended up not running the semi-finals that day - which meant that we had to race the distance race, semifinals and the finals all on Sunday. So I went home and got a great meal and some good sleep, so I could race hard the next day.

The distance race started at 8:15am and it was a 6-mile triangle course. We started in the water standing up and I had a solid start. The drafting started immediately and there were at least four trains going on. I was in the middle behind Slater Trout until we got to the first buoy turn - where the Interstate 5 and the 405 merged - and I got stuck behind everyone and came out of the turn in 17th - which made me nervous, but I just kept hammering and had to wait for my move. I waited and just drafted to save energy and turned the two upper buoys and headed back to the horseshoe buoy turn. Right before the turn I knew I had to get out of traffic and make a great buoy turn. I jumped on to a few bumps and got beside Mo Freitas and was in about 7th place.

Traffic jams and buoy turns are a combo for carnage. | Photos: Onit Pro. 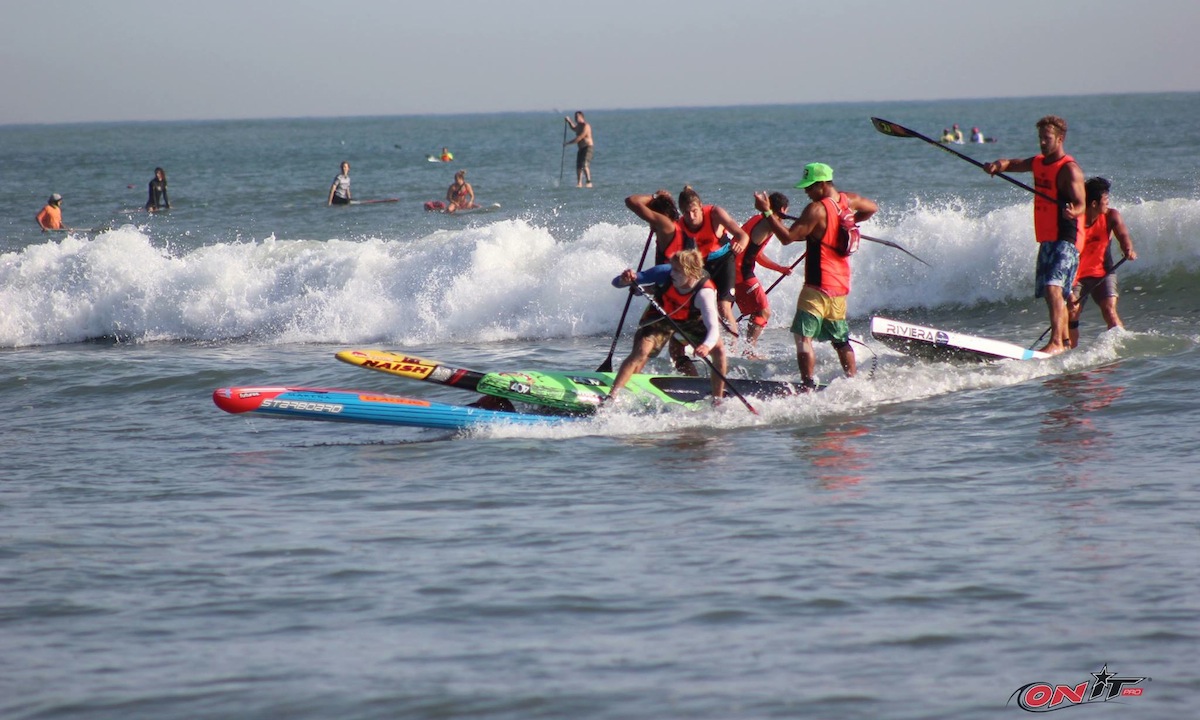 We had a solid stretch back up to the last buoy turn and there was my next move. I put my head down and caught up to Danny [Ching] and Travis [Grant] and anticipated my turn for the buoy into the the surf. I knew I had to catch a bump to have any chance to do anything. I caught a wave that only Danny and I would catch and it came to the run up the beach - and I knew I had it. I waited for the jump to the sand and then that brutal sprint up the beach where I hit with great momentum in front of Danny Ching. Winning the Long Distance was a great way to start the day! I was super beat from that race - but I knew I had a long day ahead of me. Next up were the semifinals and I just had to make the top 15 for the 30 man final. I used as little energy as possible - and made it through - so I had strength to win the finals.

Then it was the finals - and when it came down to it, I knew the start was everything. I went all out and was just behind Mo, Tito and Casper and a few other guys. I almost had the wave that Mo and Tito caught but just couldn't get into it. From there, the world came down to boards hitting me everywhere and me on the wrong side of the buoy. 23 of us were on the same wave! I grabbed my board and crawled around the buoy and came out in the worst place ever. I was in about 20th place. But, when I looked up I saw Danny and Kai right there beside me, so I felt a little hope. 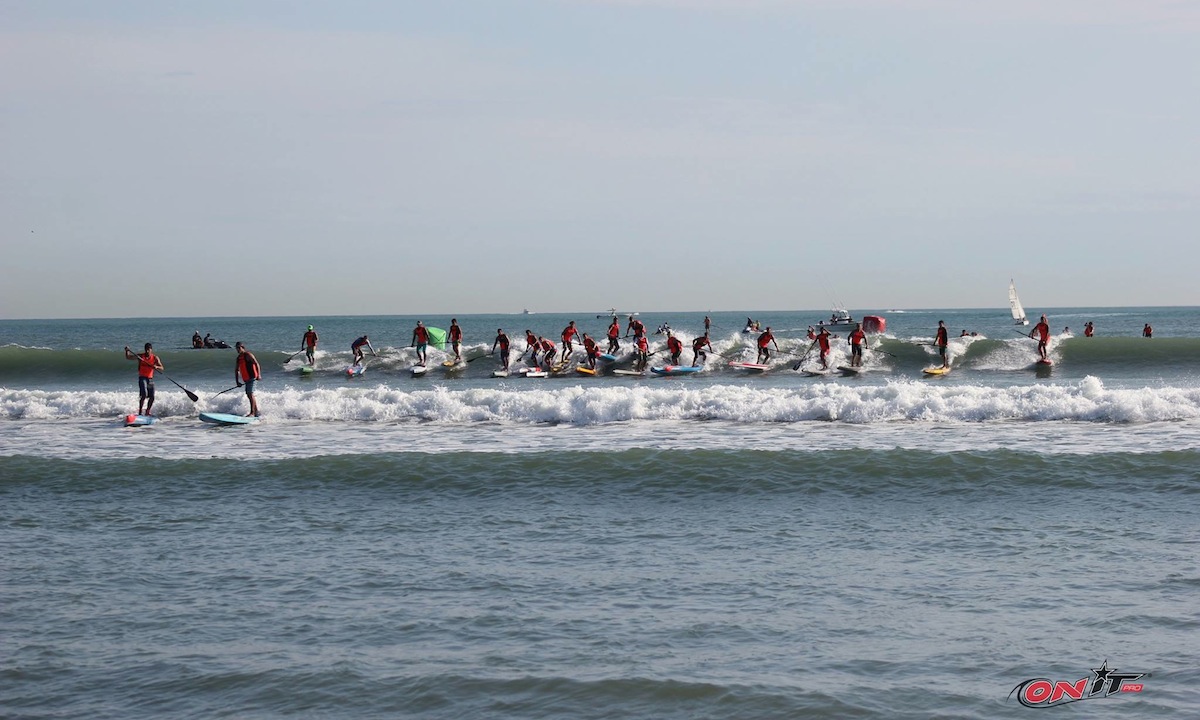 I kept giving it 110% and saved enough energy for the final lap. Little by little I gained positions. I caught a sick bump by myself that got me a wave and I took the opportunity to catch up to Travis and Casper for any hope of the overall award. I hammered up to Chuck Glynn and went wide of the buoy so I could catch the only wave for hope of a good position. I somehow hammered on to it and caught up to everyone and was ready to run. We got close to the beach and Kody [Kerbox] got in front of me, so I had to jump over his board and I smashed my toe (actually fractured it), but I somehow ran up in 4th place. It was the craziest comeback of my life and it somehow put me into 1st Place Overall. I could not have been more stoked ever to win the Overall at the Inaugural Pacific Paddle Games against the best field of athletes.

I want to thank my sponsors for all their support – Starboard, Discovery Land Company - Makena Beach Resort, Dakine, Maui Jim Sunglasses, Rainbow Sandals, Futures Fins, Hammer Nutrition, GoPro, Waterman’s Sunscreen, OnIt Pro and Hi-Tech Sports. Also a big Mahalo to all the event organizers, sponsors and all the volunteers. Absolutely one of the Best Events!!

To see more news and highlights from the 2015 Pacific Paddle Games, CLICK HERE.