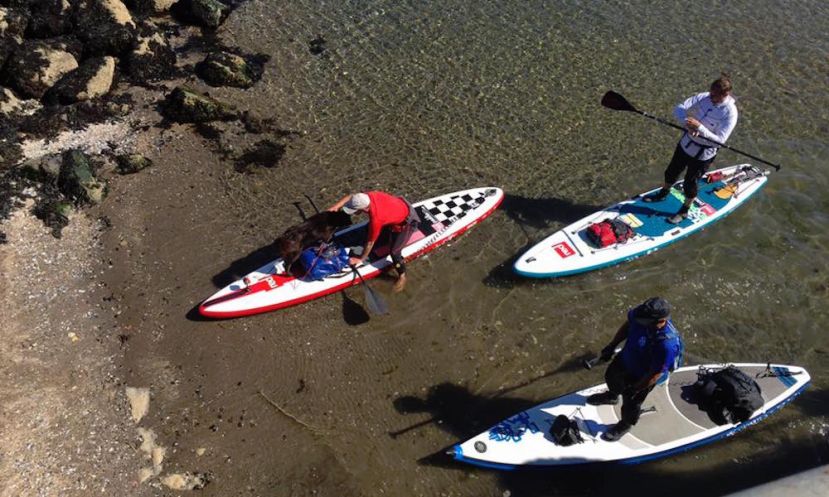 Dean Dunbar, Ian Cormack, and Allistair Swinsco were the first to complete the trail on SUP. | Photo Courtesy: Craig Wilson

ARGYLL, Scotland - Dean Dunbar is a Blind adventurer and inspirational public speaker. Two years after being registered blind at the age of 29, Dean did a charity tandem skydive which changed his life. Since then he has notched up over 80 activities around the world, ranging from adventure racing to zorbing, and set almost 20 world firsts in activities ranging from open-water swimming to stand up paddle-boarding. Dean’s latest mission: attempting to paddle the Argyll Sea Kayak Trail.

At around 6am on Thursday the 12th of May, Dean Dunbar and two other adventurers set off to stand up paddle the full 150km of the Argyll Sea Kayak Trail which spans the coastline of Argyll and Bute. The Argyll Sea Kayak Trail is a group of easily accessible launch sites at key points along a route which links Helensburgh in the south-east with Oban in the north-west. The route has been accomplished in its entirety by a number of paddlers to date, however the group accomplished a double first, in completing the trail on SUPs, (Stand Up Paddle-boards) and Dean Dunbar being the first registered blind paddler to complete the trail.

The team was made up of Ian Cormack from Glasgow, who runs SUP Ecosse, Allistair Swinsco from Carlisle who runs Northwest Paddle boards, and registered blind paddler Dean Dunbar from Blairgowrie who is an inspirational public speaker. The team are all highly experienced paddlers, and hoped to complete the 150km paddle in around four days depending on weather conditions. The group of three started the trail from Ganavan (Oban) on the 12th of May, and arrived in Helensburgh on the afternoon of Sunday the 15th of May.

Arriving at Helensburgh and standing in front of the final sign. | Photo Courtesy: Craig Wilson

The challenge was originally thrown down by Oban SUPer (Stand up Paddle Boarder), Cathy Winterton. She was planning to be part of the team, but unfortunately due to family commitments had to pull out. Dean Dunbar said “I was first told about this route last year, and since then I’ve been waiting to get started. I’d like to thank Argyll and Bute Council who have been of great support during the planning of this trip”.

As well as the water team, there were two support vehicles on land throughout the trip, being driven by Rhona Dunbar, (and Stumpy the dog), and Alison Rennie. To learn more about Dean Dunbar more information on can be found at the following links: www.extremedreams.co.uk and www.dean-talks.com

More in this category: « Go On Your Dream SUP Expedition With Help From The Hobkey Adventure Grant SUP Surfing The Mediterranean Sea »