ZAMAMI ISLAND, Japan - A dozen of the world’s best paddlers stood on the start line alongside Japan’s finest, with grey skies and light rain greeting competitors Saturday morning after a week of blue skies and warm weather. The overcast weather was quite welcome though, as it turned down the temperature and gave athletes respite from the island’s infamous heat and humidity. The race course featured flat water, sidewind and downwind as the course weaved through the tropical islands of Zamami.

After a fast start out the the 1km opening marker buoy, a pack of five broke away and stuck together for most of the 17km race. Following his first major win of the season, Starboard athlete Connor Baxter showed up in fine form to take his second win of the season and climb up the rankings ladder. Connor raced smart, always sitting near the front of the pack before waiting until the very end to make his break. He resisted early attacks from the Hasulyo brothers and conserved enough energy to outlast Lincoln Dews and 16-year-old Noic “Chicken” Garioud. The final kilometer was a side-winder that Connor and Noic somehow turned into a downwinder, with both athletes somehow milking non-existent bumps right to the beach.

Noic had a breakout performance, pushing Connor all the way to the line to finish a close runner-up. Better known for his downwind skills, Noic surprised just about everyone with his second place finish in a “grind” of a race where he wasn’t predicted to podium. His result shows just how talented this young all-rounder really is.

Aussie Lincoln Dews was in the hunt all day but had to settle for third in the three-way sprint to the beach. Daniel and Bruno Hasulyo controlled a lot of the race but faded in the final kilometer to finish in 4th/5th. Despite missing the podium in Japan, the brothers from Hungary look to be genuine contenders this year and will be in the hunt for the EuroTour title over the next two months.

For 2018 the women have elevated to the 14’ class but in Japan the ladies switched up their board sizes and went back to the 12’6” class to stay in the norm with Japan regulations. SIC Maui’s Seychelle Webster set the early pace before home-nation hero Yuka Sato started driving the front train. Before long it was a four-woman breakaway with Seychelle, Yuka, Sonni Honscheid and Fiona Wylde dropping Lina Augaitis and Terrene Black.

To stay on par with her performances thus far this season Sonni made her signature breakaway at the 6km mark before paddling the final 11km solo. None of the other women could go with her, however Yuka was extremely impressive in staying within shouting distance. Sonni’s victory is her fifth-straight of the 2018 Paddle League season following wins at the Air France Paddle Festival, Carolina Cup, OkuKai and Paddle Imua. The German powerhouse looks unstoppable this season. 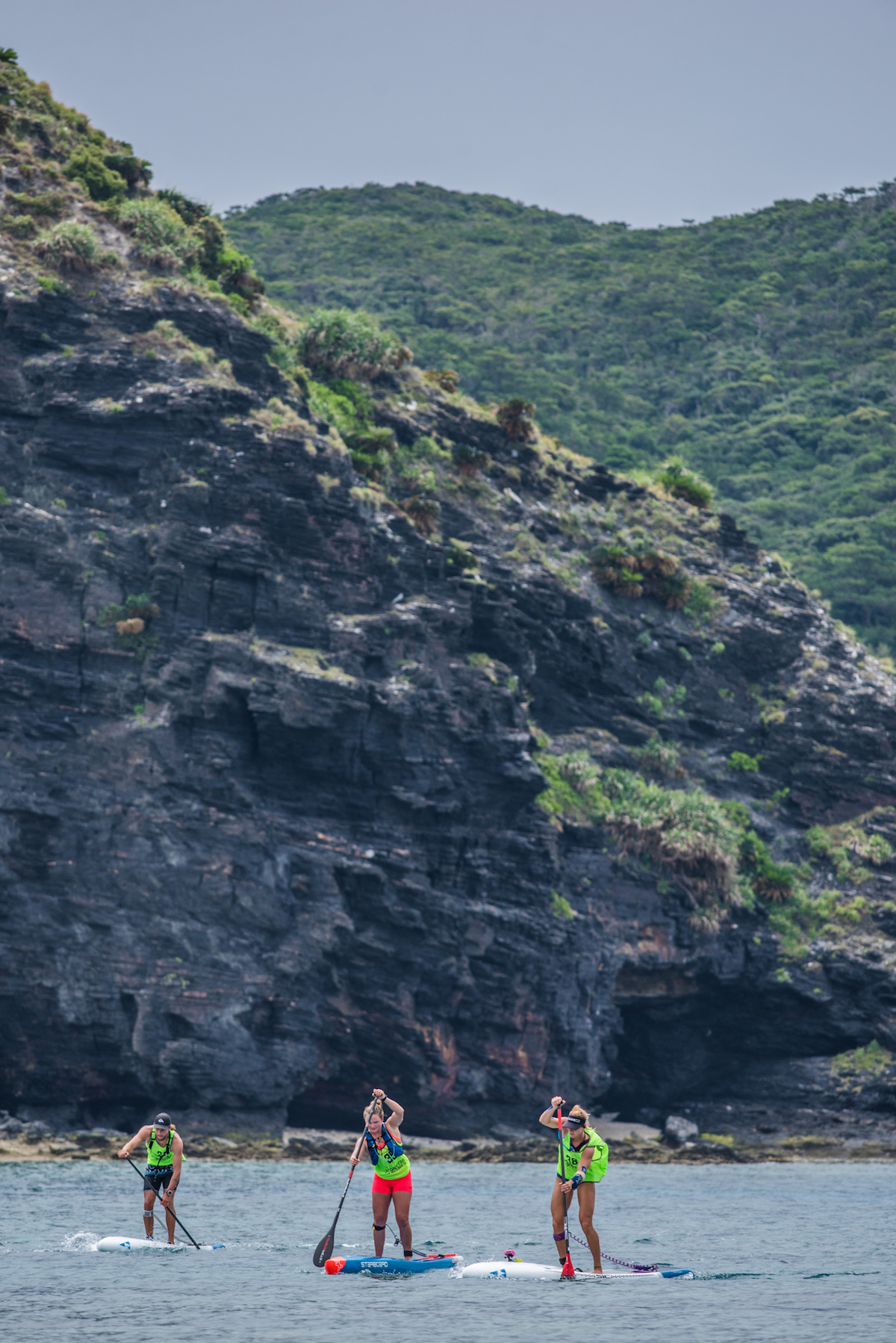 Yuka Sato a.k.a the “Smiling Assassin” mirrored her result in Tahiti by finishing runner-up to her Starboard team mate Sonni. Yuka is getting stronger with every race and seems to be one of the only women capable of matching Sonni’s power right now. One of the best performances of the day was Lina Augaitis who stormed home in the closing kilometers to first reel in Fiona and then almost catch Seychelle. Lina is making her way back to the competitive circuit after giving birth to her second child so her performance here shows that she’s back and ready to stand atop the podium once again.

Fiona looked strong early but faded late and in a surprising turn ending up throwing up on the course as she battled the distance and humidity. But while she didn’t have the result she was hoping, Fiona had the quote of the day: “Tough race, beautiful place, and the kids here are ace!”

Encouraged by the solid field of international athletes on Zamami, the Kerama Blue Cup organizers and The Paddle League team stepped it up and offered gender-equal prize money for all of the top five finishers (the men were paid down to 10th; the women down to 6th).

The 2nd Annual ‘Kerama Blue Cup’ on the postcard-perfect island of Zamami was the fourth stop of The Paddle League World Tour and did not disappoint. Nearly 150 paddlers competed over the weekend across all divisions, with the island’s population increasing by more than 50% as the athletes, supporters and organizers took over Zamami. Zamami Island has a population of just 600 people but has embraced stand up paddling since the inaugural event 12 months ago. With 50 of the Island’s 600 residents being stand up paddlers under the age of 12 the theme of this year’s event is the Youth, with last year’s race spawning a new generation of junior paddlers.

The Kerama Blue Cup was awarded “Major” status on The Paddle League World Tour due not only to its incredible location, prize purse and contribution to the junior side of the sport, but mainly due to its regional significance as the biggest international race in Japan--one of the key markets in our sport
The event continues on Sunday with “Kids Day,” which includes both a junior race and a special Pro/Am Relay that features the international stars teaming up with the local kids.

The Paddle League heads to Europe next week to support the EuroTour, with the season peaking during the triple header of Bilbao, Hossegor and Germany in the second half of June. 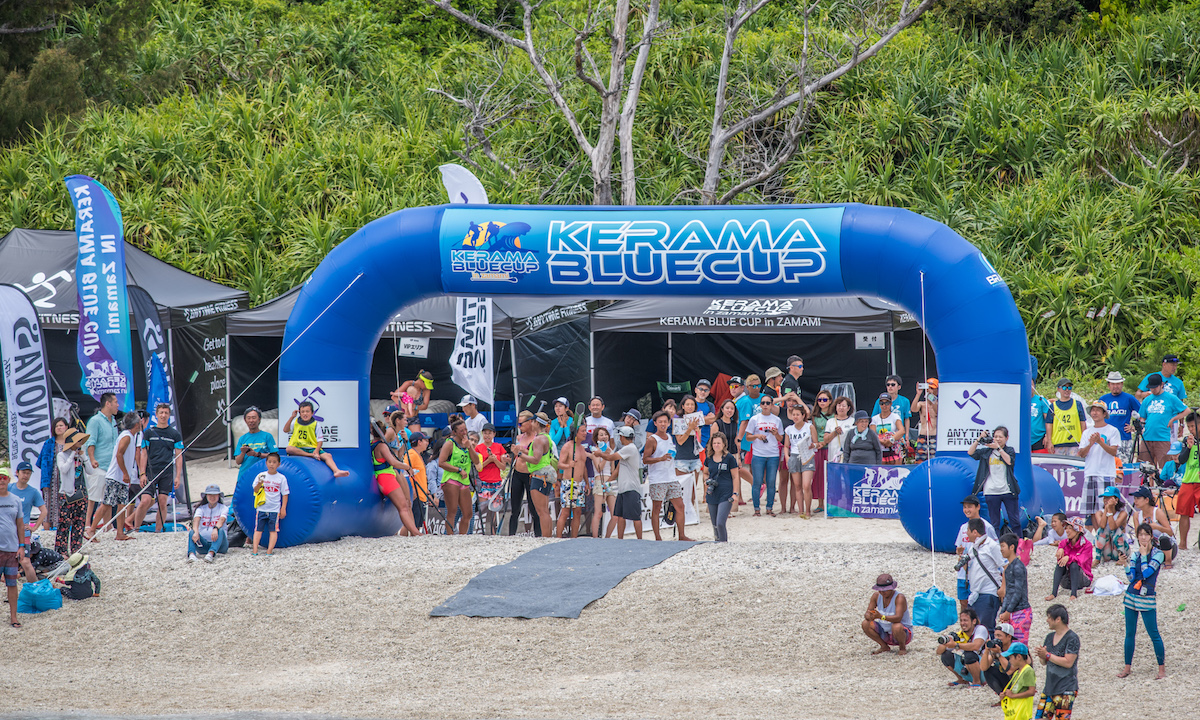 More in this category: « Boardworks Stands Up for the Cure to Raise Awareness for Breast Cancer Weekly Recap 5/15/2018 »