Recently forming the Stand by the Wounded nonprofit organization, Mark Gellert paddles down the Cape Fear River in North Carolina to raise awareness for critically wounded Operators in the US Army. 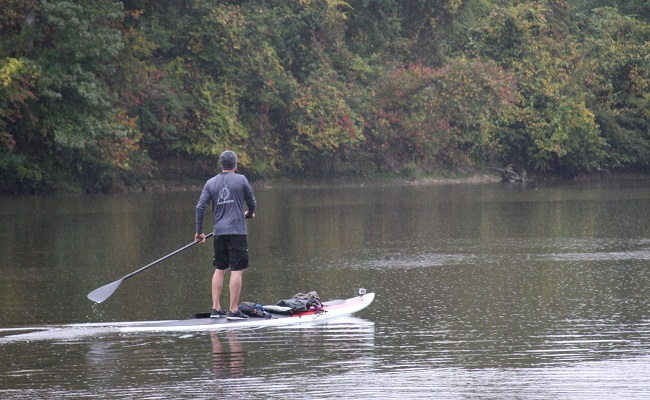 Gellert glides down the Cape Fear River on his Surf Tech Joe Bark stand up paddleboard.

Read about another stand up paddle journey for a great cause

The solo Stand-Up Paddle, began just below the Jordan Dam in Chatham County, NC. Based on kayak estimates, the paddle was expected to last ten days, but at 5:53pm on the 6th day, Gellert completed the Source to Sea journey, entering the Atlantic Ocean near Fort Caswell, North Carolina.

Gellert  didn’t make the grueling 202-mile journey for the record books. He paddled from source to sea to honor the strength of wounded Special Operations members in the name of Stand by the Wounded.

The newly founded nonprofit organization, established by Gellert, aims to meet the needs of critically wounded Operators by addressing personal gaps throughout the often-isolating rehabilitation process.

During its short existence, Stand by the Wounded has provided two wounded Operators with Apple iPad tablets. With this tool, the injured warriors can access Skype and email, organize their treatment protocols, and put e-books, movies, and news sites within easy reach.

“This is the starting line for Stand by the Wounded,” said Gellert, who also experienced traumatic injury during service. “My paddleboard journey was a demonstration of the solidarity with Veterans across the country.”