Beginning on June 20th, Dave Cornthwaite has paddled for 68 days to reach the Gulf of Mexico. Passing through many cities and meeting the locals along the way have provided for a memorable journey. 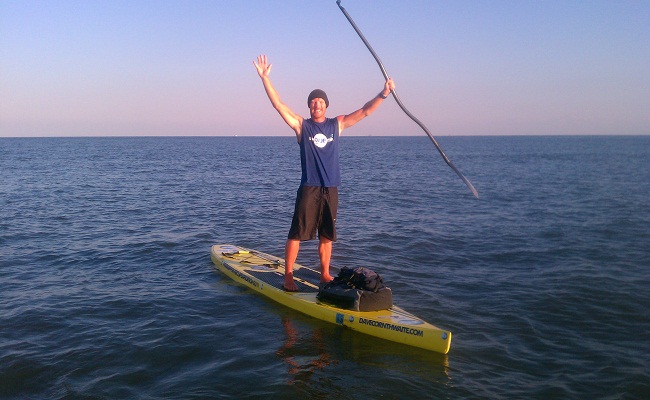 A happy man, Dave Cornthwaite knows that the Gulf of Mexico means a break from daily paddles.

Read about an average day for Dave on the Mississippi River

NEW ORLEANS, Louisiana - On Friday, September 9th, after 68 days of paddling and 2,404 miles of water beneath him, Dave Cornthwaite completed his epic journey down the Mississippi River.

With the completion of his paddle Dave becomes the second person to stand up paddle the length of the Mississippi River and the first person to do it unsupported, which translates into about 85lbs. of gear on his SUP.

Dave has also set the SUP distance record at 2,404 miles, a record previously held by Alex Linnell who, at the beginning of August, became the first person to navigate the Mississippi River by stand up paddleboard.

On his Facebook page late Friday evening, Dave checked in with his avid followers to inform them of the big news, “Made it! 68 days of paddling, 2404 miles, source to sea along the Mississippi, standing up!”

From source to sea, the river has taken Dave through the iconic cities of Minneapolis, St. Louis, Memphis and New Orleans. His journey has also taken him to lesser known parts of the river where the kindness and generosity of the locals helped to keep him afloat along the way.

Countless individuals joined Dave for sections of his paddle and even more people have donated to the charities that he has championed through this journey; the AV Foundation and CoppaFeel.

Head on over to Dave’s Facebook page to cheer on this great accomplishment and check out the journey’s official website where you can donate to his chosen charities and pictures and videos of the trip can be seen.

More in this category: « Paddle Board Journey in Long Island, New York Stand Up Paddler Pays Tribute to 9/11 Firefighters »