With the 10 year anniversary of 9/11 occurring this weekend, firefighter Beau Whitehead and shaper Tom Swetish have dedicated themselves to “Project 343”. Read on to learn about the project. 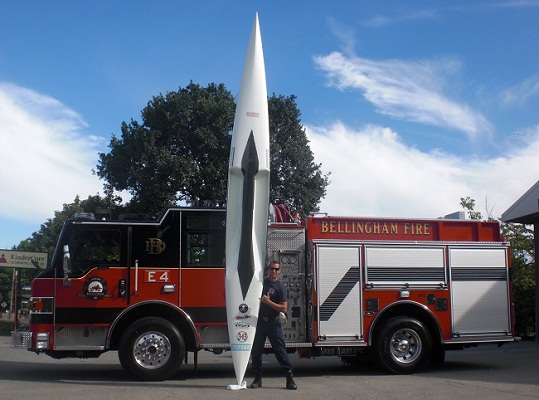 Beau Whitehead poses with "Project 343", the board he will race in the Round the Rock stand up paddle event this weekend.

Read more about the Round the Rock event.

BELLINGHAM, Washington – In reverence and respect for the 343 New York firefighters who gave their lives saving others on 9/11, Beau Whitehead has dedicated himself to preparing and training for Round the Rock, the largest stand up paddle event in the Pacific Northwest.

Dubbed “Project 343”, Whitehead has teamed up with local shaper and owner of Bellingham Boardworks, Tom Swetish, to design and shape the ultimate racing SUP, which he hopes will carry him to victory this weekend when elite athletes line up to compete at Round the Rock on September 11th.

On his blog, Whitehead says of the project, “The board was designed specifically for Round the Rock, which this year will be on the 10th anniversary of Sept. 11th.  I started calling it "Project 343" out of respect for the 343 NY firefighters who died that day.  The name stuck and it means/represents a lot to Tom and I.”

The board that has been created by Swetish is a monster of a SUP and slices through water as Whitehead says, “Project 343 has been on the water now for about two or three weeks and she's fast; and she should be at 25.5" wide and 19.5' long.”

The Round the Rock event will be held at the Seaward Park in Seattle, Washington, and will be the largest event in the Pacific Northwest. The main event is a 13 mile race around Mercer Island, located on Lake Washington between Seattle and Bellevue with elite paddlers competing for $10,000 in prize money.

Head on out and cheer Beau Whitehead and his “Project 343” on at this great event.