Beautiful shot of the view of Raiatea. | Photo: Shutterstock

French Polynesia is the dream location for just about any paddle boarder. Some may have reservations due to imagining how far one must need to travel to reach such an idyllic place but it’s actually not quite as far away as you may have thought!

Air Tahiti Nui has an eight-hour direct flight from LAX. You can fly into Papeete on Tahiti, and then connect to other islands from there. French Polynesia consists of 5 archipelagos with 118 islands and atolls, spread over an area as vast as Europe. Raiatea is located in the Society archipelago 200 km northwest of Tahiti. The flight from Papeete will take 45 minutes.

Raiatea is an island with tall volcanic peaks surrounded by a lagoon and coral reef. Its particularity is that it shares the same lagoon as the neighboring island, Tahaa. Fun fact: several million years ago, the island of Tahaa and Raiatea were only one island. Raiatea is still considered to this day the cradle island of Polynesian society and culture. 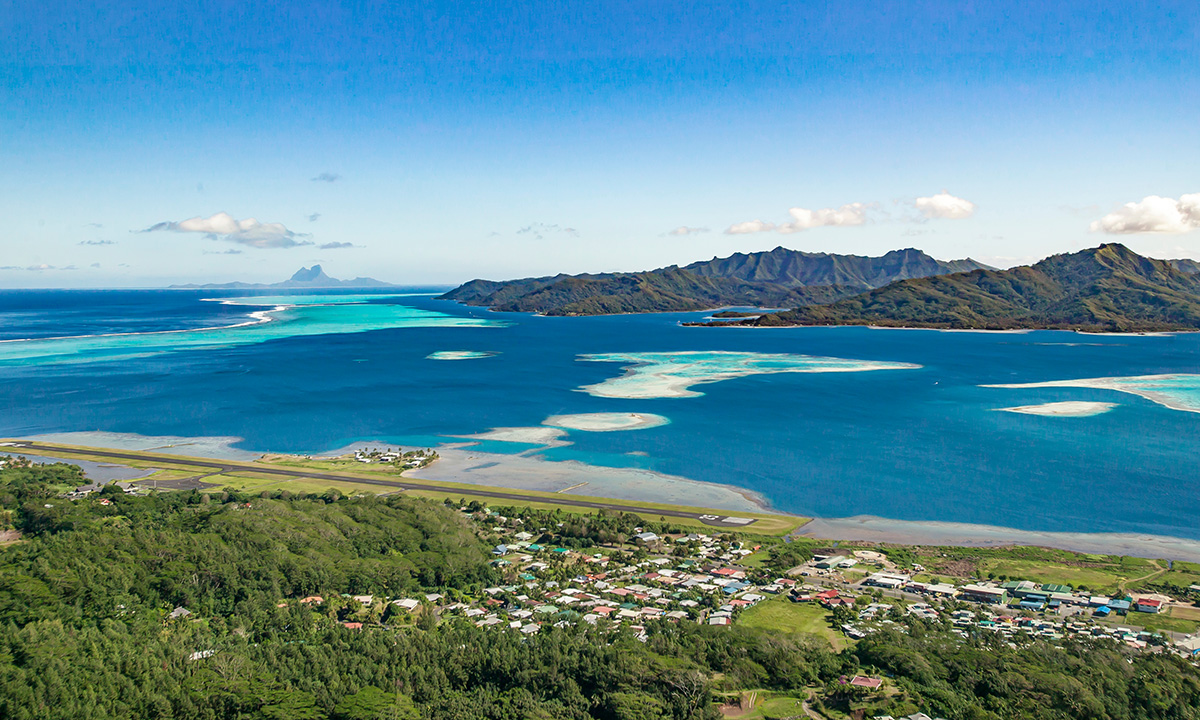 Spectacular view over the barrier Reef between the Islands of Raiatea and Tahaa. | Photo: Shutterstock

The climate in French Polynesia is sunny and pleasant, you’ll enjoy a tropical climate year round. There are only two seasons here: the Austral Summer from September through May, when the climate is warmer and more humid, and the Austral Winter from May through August, when the air is cooler and drier.

Most of the yearly rain falls during the warmer season, but there are also many sunny days during these months. The coldest months are July and August, when the trade winds are blowing from the South East, called the Maramu in Tahitian.

The water temperature stays at a very stable average, 79°F (26°C) in the winter and 84°F (29°C) in the summer. It is strongly recommended to always check the weather conditions and the tide schedule before getting on your paddleboard as the lagoon can be very agitated. 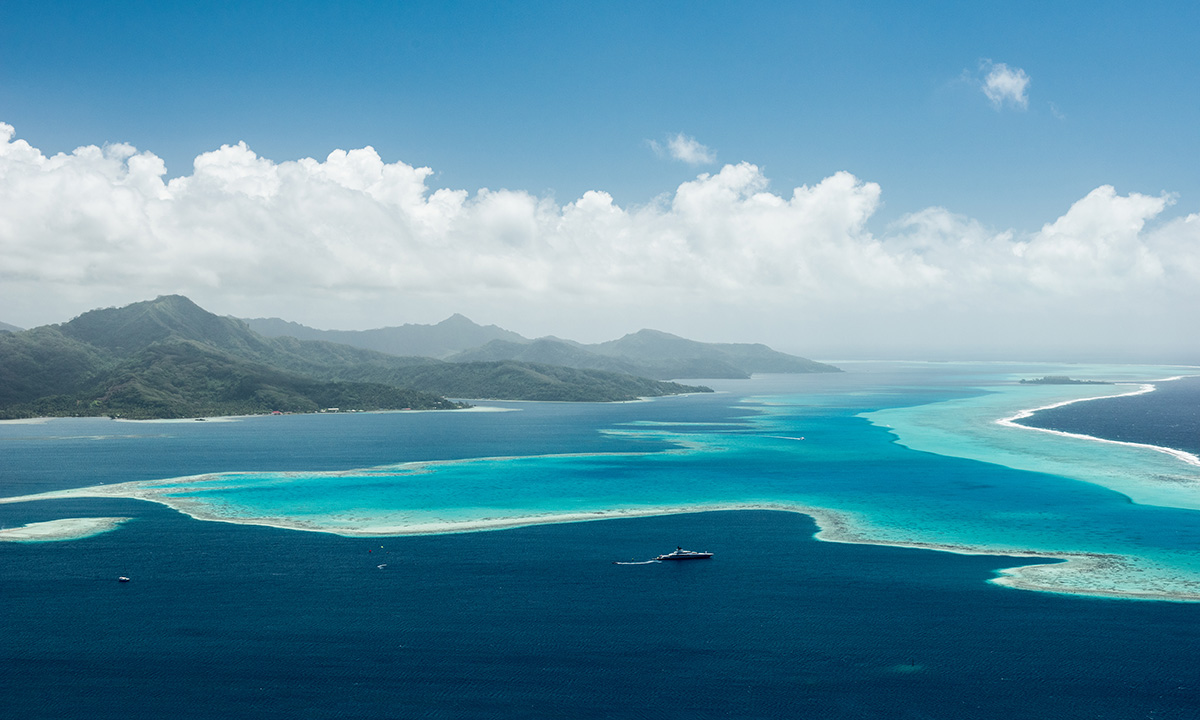 Paddle boarding on the Fa'aora River is like a SUP expedition in the jungle; it's like paddling among branches and roots, it feels just like paddle boarding on a miniature Amazon river! Located in the Fa'aroa valley, it's said to be the only navigable river in Polynesia. The Bay of Fa'aroa is about 20 minutes drive on the coastal road from Uturoa, the main city in Raiatea.

For this SUP adventure, start from the dock on the left bank and cross the mouth to join the river. Paddle board along the banks and go up the river and paddle until it becomes too shallow. The river is navigable for about one and half miles. Be sure to pay attention when crossing the bay as the wind can be quite intense. The paddle is really scenic with he volcanic earth being dark red in color and paddling underneath the canopy and interloping branches. Perhaps you may even see an eel with big ears? 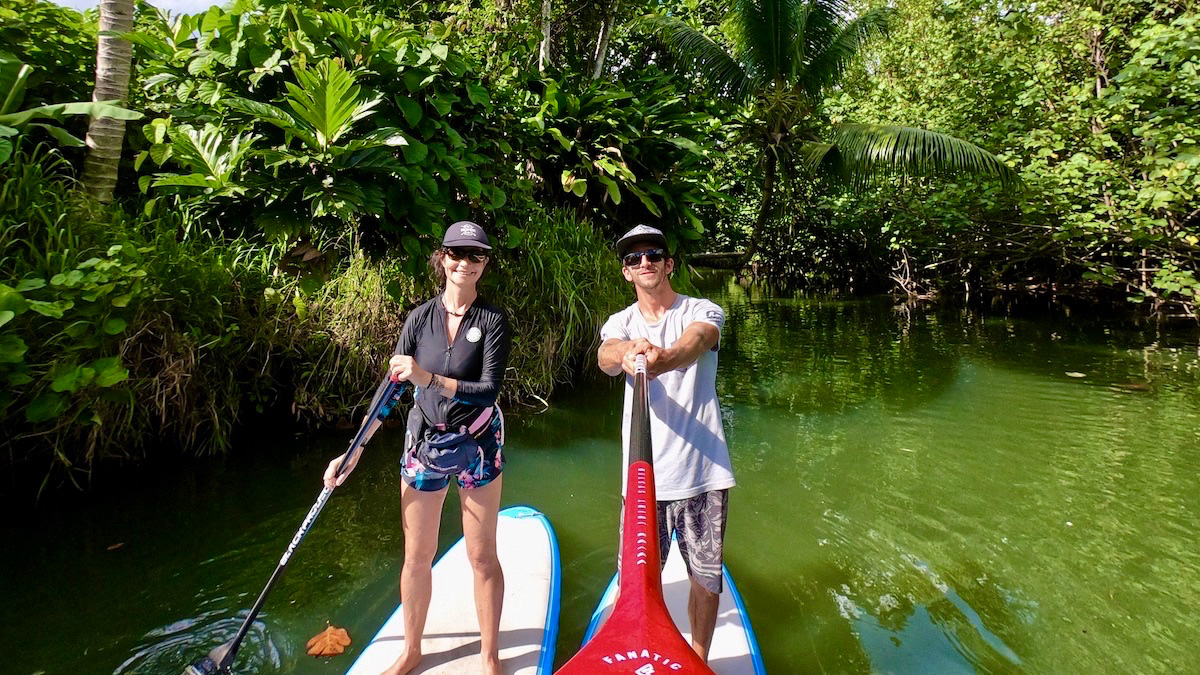 A motu is a Tahitian word which means "tiny island with coconut trees". It is protected from the swell by the coral reef making the waters of the lagoon an ideal spot to standup paddleboard. The small Motu Ofetaro is very easy to access: it's near Uturoa and along the Teavapiti pass.

From the small motu, you can admire the volcanic peaks of Raiatea on your left and the coasts of Tahaa Island on your right. It’s great to bring a picnic to feast on either sitting down on the sand or at one of the tables present, enjoying the peace and the surroundings, looking at the va’a (outrigger canoe) gliding on the lagoon.

The coral reef bordering the motu is extremely well preserved. Bring your mask and snorkel to explore the lagoon and the stunning coral. In less than 4 feet of water, you’ll swim among clownfish, parrot fish and hundreds of other colorful species. You will never want to get out of the warm and clear water! 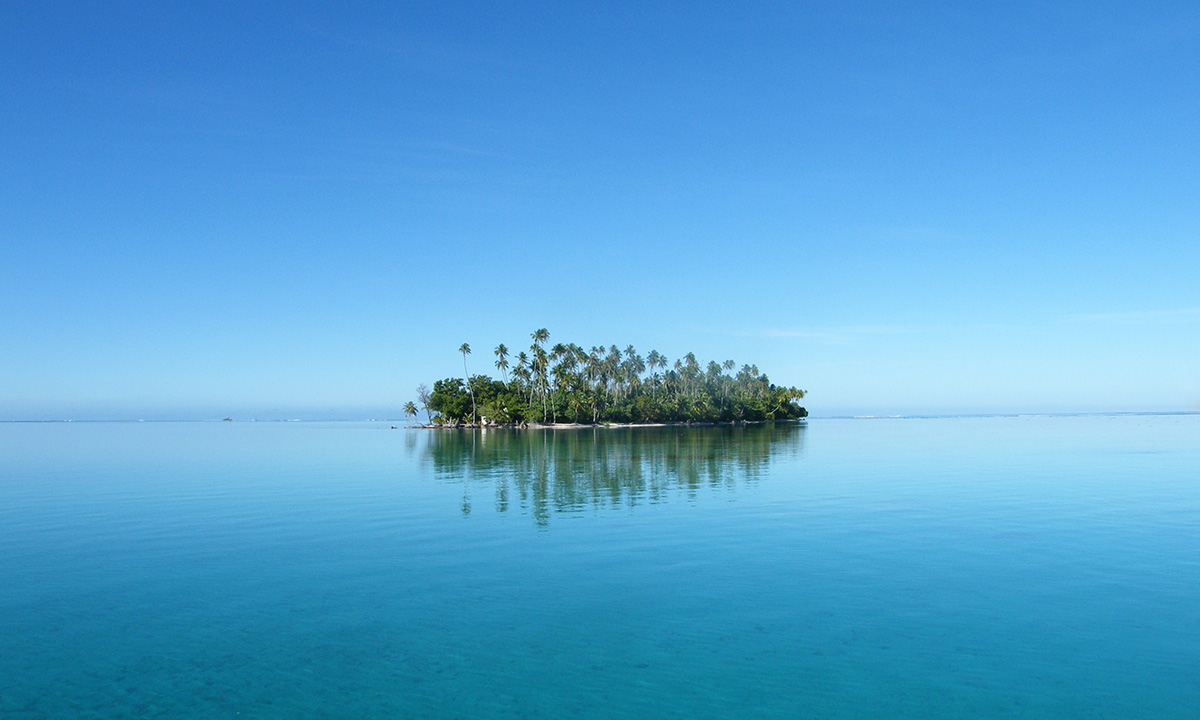 Rémy Lavie is native of the Basque Country in France. He has been living in Raiatea for a couple of years. In addition to being a SUP champion, he’s a real waterman. With Remy you can go SUP to the Fa'aroa river and also discover the lagoon aboard his « Holopuni » a sailing outrigger canoe. You can contact him via Facebook Rémy Lavie.