A few months ago, Terry Plunkett, an avid stand up paddler from Southern California, was standing in the parking lot at the San Onofre State Beach Park in San Diego with an unmistakable awe-struck expression, just a few minutes after talking to Michele Baldwin. Here is what Plunkett heard. 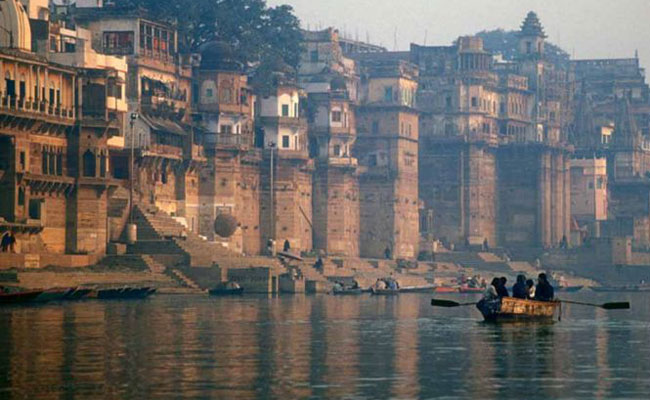 The Ganges at Varanasi, the final stop in Baldwin's 700-mile stand up paddle board journey.

SAN DIEGO, California – Michele Baldwin, an athletic looking, strong-build, 45-year old blonde, received a diagnosis that would change her life: non-treatable, terminal, cervical cancer. Given just a few months of life, this canoe-kayak guide from New Mexico leapt full-throttle forward toward life. She decided to muster her energy, time, and resources to embark on a 700-mile stand up paddle board journey on the Ganges River in India, raising awareness and funds to combat cervical cancer. The effort is in collaboration with the Global Initiative Against HPV and Cervical Cancer and aims at raising $100,000 for the cause. (Visit Baldwin’s website to donate.)

The Ganges River, also known as the Ganga, runs 1,569 miles long, is highly sacred in Hinduism, and serves as the lifeline for about 400 million Indians. Rising from the snow-melt of the Himalayas and pouring out through Bangladesh into the Bay of Bengal, the Ganga runs thru varying terrain, sometimes generating slow-moving waters, watersheds, and rocky pathways. Ranked as one of the most populated river basins in the world, pollution has become a known problem, often threatening countless species of fish, amphibians, and even river dolphins. Nevertheless, with tributaries embracing so much human and natural life, the river is considered the personification of the Hindu goddess Ganga, making the place the most sacred river to Hindus.

Baldwin has departed for her trip last Monday and will start her journey a few days after arrival. Accompanying her is a friend on a skull canoe, who will be serving as her support boat. She plans to paddle “a 12-foot inflatable SUP board in two four-hour sessions per day, from Rishikesh in the Himalayas to the hallowed city of Varanasi,” Baldwin told GrindTV.com in an interview. "I have maybe six months to live -- maybe less, maybe more -- but if I do live long enough to come home, if I have a miracle, I'll continue to fund-raise and maybe even plan another trip,” commented the 45-year old mother of three, full of spirit and charging life head on. (Learn about the initiative against HPV.)

What words do you have for Baldwin as she embarks on her journey?