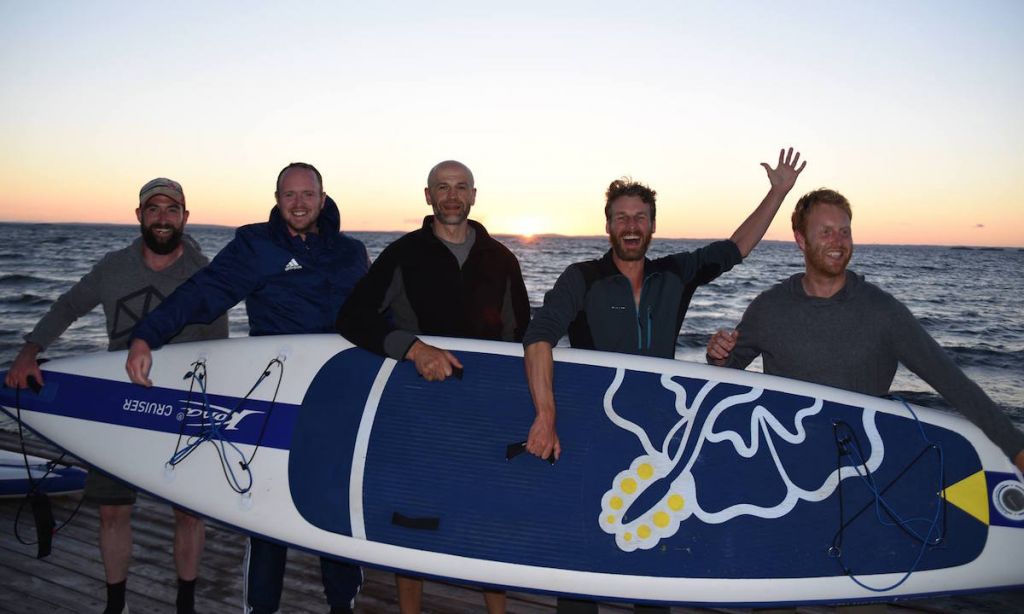 LONDON, United Kingdom - On August 4th, Australian adventure athlete, Tarran Kent-Hume crossed the finish line in Stockholm with his team of 5 Stand Up Paddle Boarders. The adventure is a 700km paddle from Gothenburg to Stockholm via the Gota Canal and Baltic Sea. As well as being a world first it’s one of the toughest SUP events out there.

The group set off from Gothenburg, Sweden on the 20th of July and completed their SUP challenge 15 days later in Stockholm. They covered over a marathon per day and some 10 – 15 hours of paddling per day totaling to near 700km’s by the time they downed paddles. The team; Tarran Kent-Hume, Luke Hindes, Alex, McCormick, George Baksa and Anthony Hennelly all from London had a proper adventure from day one and had some very real, scary and beautiful moments including when one of the team members, Alex was shot at with a high powered air rifle from the river bank, before the perpetrator ran off into the hills.

The adventure took twists and turns as the team dealt with scaling and portaging up and over a hydro electricity plant before Alex slipped off his board and was being sucked back towards the plant. Quick thinking by Luke and he was on the banks in no time, “a little hairy for day one, especially since we had to paddle three hours against the current” said Tarran. The adventure saw the team travel the length of the Gota Canal passing through Lake Vattern (Sweden’s largest lake), Motala and Soderkoping before reaching the Baltic Sea and hugging the Eastern Coast of Sweden as they headed up past Oxelosund and Sodertalje towards their final destination of Stockholm. 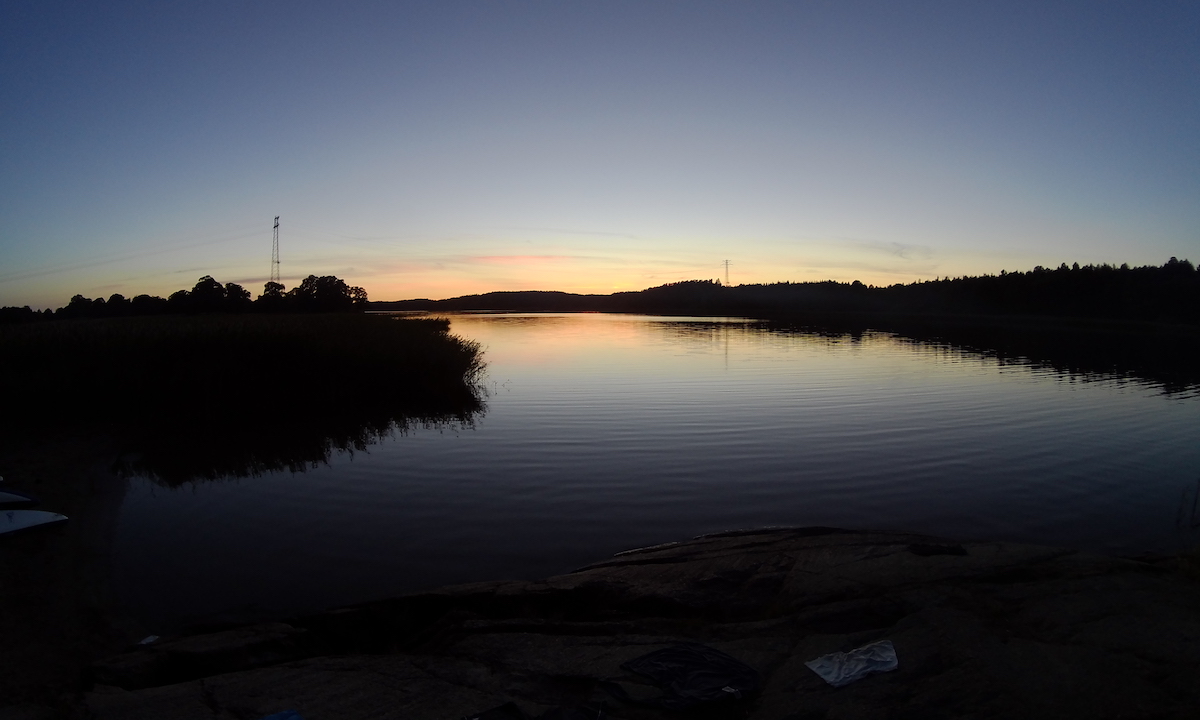 Sunset from one of the camping locations during the trip. | Photo via: Tarran Kent-Hume

The scariest moment came on Lake Vattern though. Setting off at first light from Karlsborg they were aiming to complete the 30km crossing with a stop on the small island of Fjuk two thirds across the lake when a storm broke out causing huge gusts of wind that produced six foot waves and blew them off course. The team had drifted apart due to the winds and when George came off his board before they rallied together to rescue him.

Tarran Recounts “I remember seeing George come off and going over to help him, then Anthony came off, then me and Luke, we were all calm yet acted quickly as the wind and waves were pushing us all over and we were being split up, luckily I’d made the decision moments earlier to get Luke and George and Anthony and I together. Alex was ahead and couldn’t hear our safety whistles or yells. Once we’d rescued George and gained our composure Alex was out of sight and he remained so for the next three hours.

Once reaching the Island of Fjuk I made a dash to the left hand side of the island hoping Alex had made it yet with no sight of him I made an emergency call to the coast guard and other emergency agencies. Within 15 minutes I was being picked up by the coast guard and helping to coordinate a search and rescue, which involved several boats and a helicopter. An hour later I’m getting worried as the search was closing in on our target area I hear a crackle come through the radio and one of the rescue guys tells me they’ve found his board, a minute or so later I hear they’ve spotted his red and black life jacket and he’s on the board. I was relived but remember saying, lead with that next time, lead with spotting him not just his board, that was a long minute there” Alex was found ok yet had been blown some 5km’s off course.

After Paddling across to the mainland the group was taken in by a family, the Frennesson’s who’d spotted them out on the river. They camped in their yard and had a great BBQ together with their whole family, which included 5 kids and their auntie. “After such a tough day, to be shown generosity like this was so humbling, it’s why I love these adventures, you get to connect with people and gain such a positive response that always humbles me,” said Tarran.

The adventure had many peaceful moments as the team enjoyed the gorgeous sunrises and sunsets, camped on isolated islands and along the canals and even spotted a Seal near the town of Trosa. Tarran said, “I wanted to create something fun and exciting that would combine a couple of the things that make me tick, the things that get me excited about life, Adventure and Friends. Adventure is a great excuse for us all to take a breath and live in the present with no stress of the outside world. We laughed together, ate together, lived together and SUPed together.”

Tarran grew up in Tasmania, Australia where he had the freedom of 10-acres to explore and immerse himself in nature. He moved to London at 18 years old and played semi-professional soccer for 5 years. Later, he travelled and worked as a Personal Trainer, before settling in London as a corporate recruiter. After a few years in the daily grind of corporate London life, Tarran began to realize this was exactly what he didn’t want his life to be. In 2013, he set out to change the direction of his life, and through some painful transitions, life-changing adventures and finding his calling in life, Tarran has since fought in a professional Muay Thai Kickboxing, summited Mont Blanc in France, is an Ironman, has broken a world record, medaled in his first Aesthetic Fitness body building competition, is the 1st Australian to kayak the Amazon River from its most distant source and now Stand Up Paddle Board across Sweden.