A personal story of riding the Bono tidal bore wave in Indonesia. 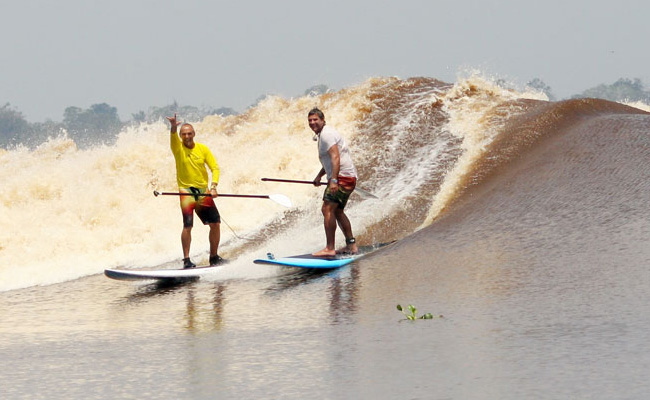 Bono - Giancarlo "Jankie "Avancini with stand up paddle on the tidal bore of Indonesia.

Back to the Bono.

It was only 1 year ago that I returned from my first visit to Teluk Meranti where together, with a few friends, I went to Surf the Bono, a tidal bore wave on the Kampar river in Sumatra. This was a trip that I started planning the day I first watched a Rip Curl video on the web showcasing this unbelievable wave in Indonesia. A quick internet search brought me to the website of “Bono Surf”, a company that was already promoting trips to surf the Bono.

All of this took place sometime in March 2011 and within couple of weeks I’d assembled a team of SUPers to follow me on this adventure. I always dreamed of surfing a river wave like the Pororoca in Brazil but the distance and organizational difficulty had always been an insurmountable obstacle. Finding such a marvel so close to home just blew me away. The dream of a lifetime was coming true.

Everything was booked and ready for the trip well in advance, and all was proceeding as planned when just few days before leaving we found out about another expedition going to Teluk Meranti at the same time that we had planned our trip! A government backed group of surfers was heading out with the objective to film a movie to promote surfing in the Kampar river area. Almost a dozen surfers, long boarders, a body-boarder and SUPer were fully equipped with jet skis, rescue boats, media boats and even a helicopter. Surely this meant an overcrowded wave! It was too late to change plans and with people from our group already on the way to Bali from Australia we decided to continue.

We had our adventure and conquered the Bono but with so many people on the wave, many boats following us making wakes and messing up rides, our trip was less than perfect. Nonetheless all of the guys from our group still caught good waves and enjoyed this incredible phenomenon.

Personally, I had some great long rides but realized these were only a small fraction of what could have been. From the day I came back to Bali I began working on a plan to go and surf the Bono again. This time I wanted to make sure that I would get the best conditions and the chance to surf without too many people. I decided to become the "Substitute", ready to go if any spot became available. But in the next few months nothing happened and the trips were always solidly booked. Then in early October, 2012, I found out that nobody booked for the November trip, scheduled exactly one year after our first trip!  I quickly contacted the guys at Bono Surf plus the locals at Teluk Meranti to find out more information and make sure that we would not face any surprises.

After receiving the news that no one else booked or was going to be there, I finally got the ticket just 3 days before the Bono wave was supposed to appear. After a few phone calls I was able to find someone with time on his hands and signed up my friend Tony from Australia, who had also been part of the original trip. What a dream: only 2 people to share a wave that goes for hours!

With great excitement we left Bali for Sumatra. Two flights later we landed in Pekanbaru and headed to the waiting car for the 6 hour drive to Teluk Meranti. It’s a long trip, even from Bali, a full 13 hour mission. We arrived at dark and immediately found the group of friendly villagers that we had said goodbye to just a year before. Everyone was happy and surprised to see us as only Eddie our guide knew that we were coming and had only been notified at the last minute. Tired but full of excitement we went to sleep to be ready the next morning.

We expected the Bono to show up at 09:00.  It was the first section near the Island of Pulau Muda and would take just over 1 hour by boat to arrive. With our SUP boards well-strapped to the inflatable Zodiac boat powered up by a nice 40 HP Yamaha engine, we left the dock and started the chase! Surfing a tidal bore is so different than surfing on the ocean not only because of the wave but also due to the fact that no one is sure where and how it will show itself. Different tides and the water level of the river affect the wave in a very radical way! It is quite possible to wait in a place where the bore normally starts to break and have nothing happen, only to realize that it’s breaking 500 meters up-river from where you expected it.

The result is that the boat captain has to chase the Bono and drop you off well in front of it, but not just anywhere! He needs to put you in the correct spot where you are able to catch it and not get smacked onto the banks of the river. In some sections of the river, the Bono is a perfect wall of water forming a never-breaking wave, while in others it’s just a wall of white water like a giant tsunami traveling up river at 15-20 kilometers an hour! A destructive force of nature that takes down anything in its passage and is sensibly feared by the locals. Many boats have fallen victim to this power and lives have been lost. It has only been since the arrival of Mr. Anthony Colas, owner of the Bono Surf operation, to Teluk Meranti in 2010 that the locals were taught not to fear the Bono.  They have come to view the Bono as a phenomenon to play with and some of the locals even get on the river just to watch it or even surf it.

On my first trip the only people on the wave were the pro’s and us, but this year there were at least 2 dozen locals who showed up to surf the last 2 sections of the river close to Teluk Meranti and they had all kinds of rides.  Some had traditional surf boards while others had homemade wooden boards they had shaped following their own ideas. We saw some people just using a plank of wood similar to a bodyboard, as well as some shaped like an Alaia.  We also saw some that looked like rockets with a leash attached to the front which they used like the bridle of a horse to ride. The locals would ride the length of the wave lying down mostly in the white water and then stand up for just the last couple hundred of meters before the wave disappeared in deep water areas.

Tony and I had 4 days of great riding with the Bono which grew in size every day of our trip from shoulder to head high and from choppy to glassy.  In a single day I ended up riding the Bono for well over one and a half hours between the different sections.

There are at least 7 different spots on the river that create a glassy wall of chocolate dream with some rides that last between 10 to 20 minutes of uninterrupted splendor. Riding the Bono or any other river wave should be on the bucket list of any surfer! It’s a fantastic experience that does not compare to any ocean wave, not matter how big and perfect. There is a sense of the mystical and magical surfing a wave that moves on a river. My regular Bali waves are not longer the same. I definitely caught the Bore Fever!!!

More on the Bono:

The discovery of the Bono is very recent. It all started in the New Moon period of September 07-13, 2010.

Mr. Anthony Colas, from France, is an expert on tidal bores who went to check the unknown river bore with 4 friends. They filmed the whole adventure, which was broadcasted on French TV on Jan 28th 2011 and viewed by 2.5 million people. Colas and his team had been expecting a small wave because the bigger tide range occurred overnight, but nevertheless they experienced a 2-8ft face with glassy walls for 4 days.

Anthony Colas then went back with a group of other friends on 07-12 December to face the big daily Bono, which probably peaked with an 8 to 10ft face. Then in March 2011, Mr. Anthony became the Event Manager for a new Rip Curl Search which brought Pro surfers Tom Curren, Dean Brady, Bruno Santos, Tyler Larronde and Oney Anwar to the Bono. With 3 Zodiacs, 2 jet skis and 1 chopper, the photo results were crazy beautiful and included the first-ever barrel rides caught on film.

The village of Teluk Meranti on the Kampar River is a small friendly village of 2500 people.  They have small shops, a Saturday night market and 4 schools. GSM phone coverage is excellent and you can get internet through 3G key.

How to get there: The closest airport is Pekanbaru in central Sumatra. It’s an International airport with daily flights from Singapore, Kuala Lumpur and Jakarta plus other major Indonesian cities.

Trying to surf the Bono without a boat to take you down river is pretty much impossible. The only company organizing full packages that include expert trained guides with inflatable boats, logistics, food and accommodations is “Bono Surf” which is owned by the original explorer Mr. Anthony Colas and f a few friends.

For our trip we used Jimmy Lewis SUP boards, a Stun Gun and a Kwad that performed exceptionally on the never ending waves of the Kampar river.

Are you ready for this adventure?