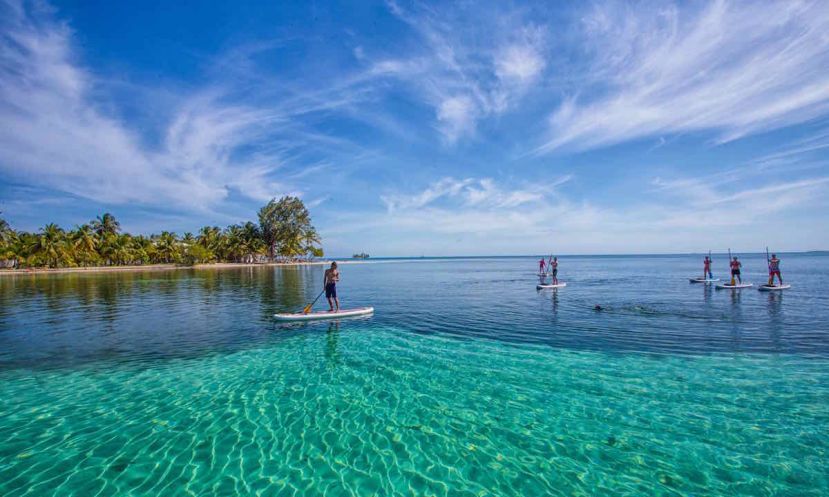 DANGRIGA, Belize - Island Expeditions, the leading adventure travel company in Belize announces a partnership with pioneer Norm Hann Expeditions, one of North America’s leading stand up paddle board (SUP) instructors in the industry. Island Expeditions’ Coral Island SUP trip was honored by Outside Magazine, as “Best of Travel” and features the only multi-day SUP island to island snorkel adventure in Belize.

Stand Up Paddleboarding is the biggest growth story in adventure travel and Belize provides the ideal location with the second longest Barrier Reef in the world. Paddlers can look forward to being immersed in Belize’s spectacular marine habitat with its palm studded islands, coral reefs, mangroves and abundant sea life.

Combining beginner through advanced skills development, downwind coaching and expert local interpretation, in one of the most incredible tropical marine environments, Island Expeditions and Norm Hann have together meticulously built the ultimate multi-day stand up paddleboard experience for all levels.

Island Expeditions Director Tim Boys stated: “Norm’s extensive background in SUP and his recognition as a top instructor in North America was one reason we reached out to him. But, it was also his passion for local culture and conservation that spoke to us. After having him in Belize, and seeing his ability to connect to the Mayans, Creoles and Garifuna in Belize, it was clear he was the right person to work with us to develop our SUP program”.

Norm Hann stated, “Like Tim, I saw the massive potential for SUP in Belize, as there are so many options for paddling and it’s just an amazing country to spend a week in. We have continued training the local guides and we now have six Paddle Canada certified Belizean instructors, who focus on safety, technique, interpretation and having fun.”

This trip is ideal for those paddlers seeking the adventure of a guided and fully catered SUP journey combined with the comforts of small lodges in spectacular locations. Along with Norm Hann’s skilled instruction and coaching on select departures, this adventure is ideal for those who want to improve their standup paddleboarding skills.

With 30 years experience kayaking and snorkeling in Belize Island Expeditions knows the reef system like few others. Since 1987, Island Expeditions was one of the first adventure travel companies in Belize that pioneered world-class guided sea kayak and snorkel; now with Paddle Canada certified instruction and guided paddleboard programs. Adventurers can choose from all inclusive luxury basecamps on remote coral atolls to classic journeys paddling from island to island along the southern barrier reef. From first-time paddlers to seasoned adventurers, Island Expeditions has vacations to match many interests and activity levels.

As an early pioneer of the sport in Canada, Norm started paddleboarding and quickly used SUP to explore the British Columbia coast and soon started leading multi day SUP trips to the Great Bear Rainforest as part of his expedition and training company, Norm Hann Expeditions. Norm is a global athlete ambassador with Boardworks Surf and Kokatat and is a Paddle Canada SUP Instructor trainer who has taught and shared the sport with thousands of people in Canada and internationally through his courses and training programs.