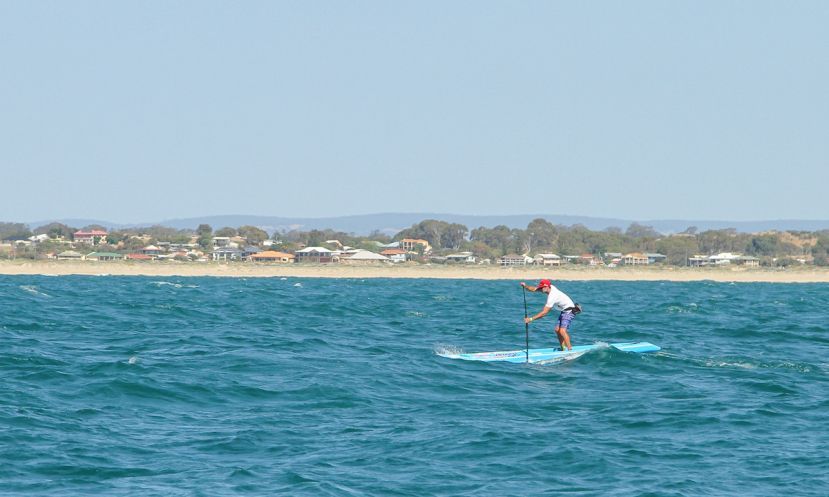 Tituoan Puyo on his way to the finish line. | Photo: SUPWA/Woolacott

MANDURAH, Australia - Over 130 international, interstate and local competitors gathered for the World’s fastest downwind paddle race, the King of the Cut Race on Sunday, December 4, 2016 in Mandurah, Western Australia. Near perfect conditions blew in for the 24-kilometre race with southerly winds at 18 to 20 knots.

The world’s fastest downwind SUP race and arguably the most prestigious outside of Hawaii and Oregon, the Stand Up Surf Shop King of the Cut has crowned a new King, Queen and on Saturday, a Prince.

From New Caledonia, 25-year-old Titouan Puyo (NSP SUP) has taken title honors at the 2016 King of the Cut. In second place, a huge performance by 15-year-old Clements Colmas stunned the field’s finest to give New Caledonia a 1-2 clean sweep. Defending King of the Cut champion Matt Nottage (Starboard) from Queensland rounded out the top three.

Start of the 2016 Stand Up Surf Shop King of the Cut. | Photo: SUPWA / Woolacott

Puyo, who also won The Doctor race on the weekend prior from Rottnest Island to Sorrento, said that he was delighted with his win.

“The conditions were good, the wind wasn’t so strong to start with, but I rode every bump I could. With downwind, it’s not so hard, I don’t feel too tired now, not like last week when I did The Doctor. It’s more about gliding – it’s good fun. I saw Matt [Nottage] who was close by and I pushed hard to keep the lead. I saw Clements [Colmas] and I said to him to go. He’s incredible,” Puyo said. 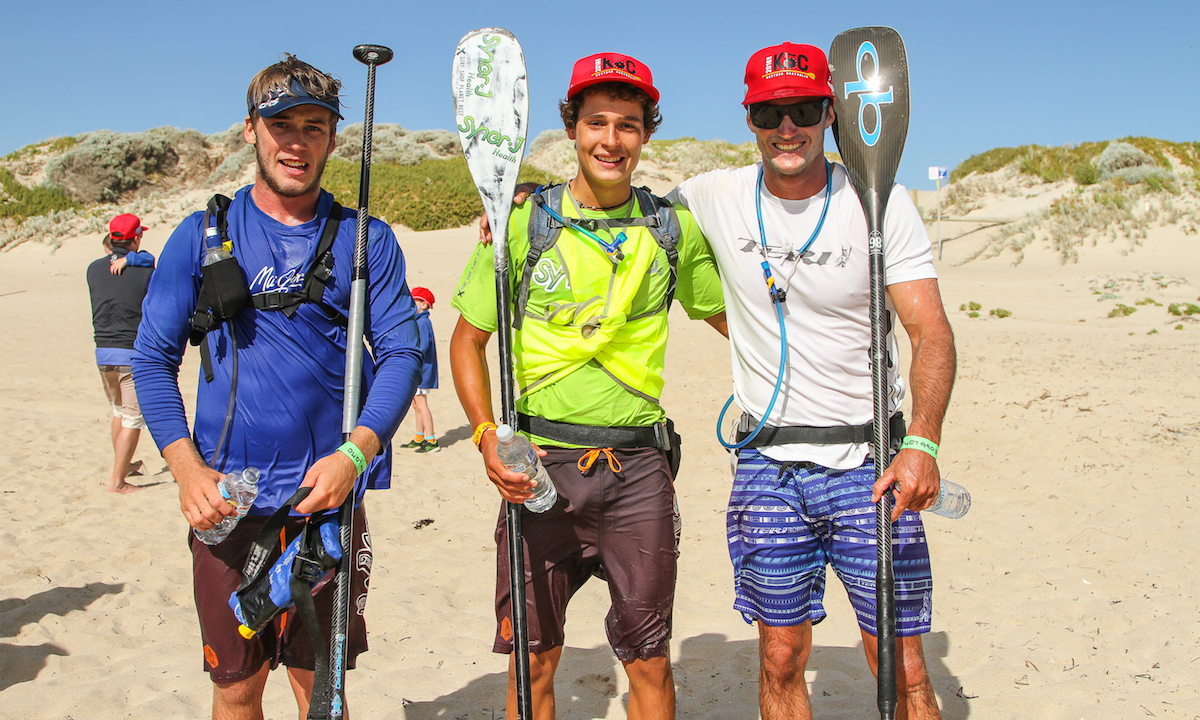 The youngster and New Caledonian compatriot Colmas has downwind pedigree; his father JL Colmas is a famous windsurfer who help develop Starboard during the brand’s early days.

“I am very happy, the race was very nice and the wind was good. I love the downwind conditions in Western Australia – I’ll be back next year,” Colmas said.

The first female across the line and Queen of the Cut was race-favorite and 7-time Champion Surf Lifesaving Ironwoman, Karla Gilbert OAM. Gilbert said she was happy with her win.

“I’m thrilled. I was just trying to focus on one run at a time. I tried to choose the right line, which is something I didn’t do last time [two years ago],” Gilbert said. 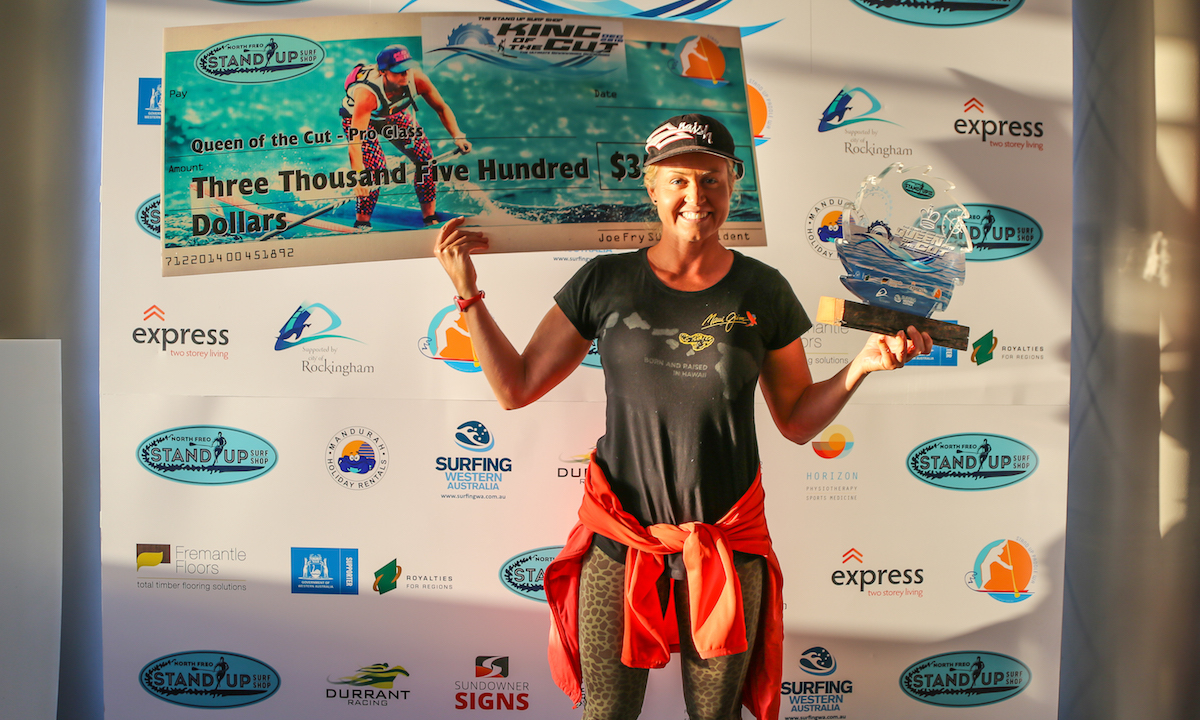 Marie Buchanan from the UK was ecstatic with second place and Queensland’s Angela Jackson finished in third.

Sharing the start line at Dawesville Cut with 130 competitors, over 90 of them from outside of Western Australia, was a pod of dolphins, adding to the already postcard vista of the Western Australian coast.

Competitors travelled from as far away as New Caledonia, New Zealand, Singapore, South Africa, Japan and Ireland as well as from around the country.

The Stand Up Surf Shop King of the Cut attracted its biggest field in its five-year history that included elite SUP competitors as well as first time downwind racers; the youngest competitor was 14 years old and the eldest, 60 years old. Approximately 15 percent of the field was female.

The two-day competition window was applied to optimize the best conditions available and the 2016 King of the Cut was held on Sunday 4th December 2016 in Mandurah, Western Australia. With a total prize pool of $17,350, it is the largest prize purse for an SUP event in the country.

On Saturday (3 December), 14-year-old Sam McCullough was crowned Prince of the Cut after he took line honors in the 10-kilometre Half Cut. The Year 8 Melville High School student backed it up on Sunday to compete in the 24-kilometre main event finishing first in the State Under 18s and third in the under 40 category.

Check out the highlights video below.