Awards
updated 7:00 AM PDT, Jun 1, 2020
Headlines:
Morbihan Paddle Trophy Postponed to 2021: Initially scheduled for June 13 and 14,
Cumbria Paddler to SUP Ohio River to Rai: An intrepid fundraiser is preparing for
Paddle Boarding Vancouver, British Colum: Vancouver, British Columbia is widely re
5 Tips To Improve Your SUP Race Performa: Want to know the key to success when it
Weekly Recap 5/26/2020: Welcome to the Supconnect Weekly Recap,
Standup Paddle Board Review Index: Looking for something specific? Take a s
Summer Nutrition 101: Everything Your Bo: 1.2 million people are expected to paddl
What Are the Mental Health Benefits of S: One major reason that so many individual
Paddle Boarding British Columbia, Canada: British Columbia is Canada's most wester
7 Physical & Mental Benefits of Whitewat: Take your paddle board out to some white 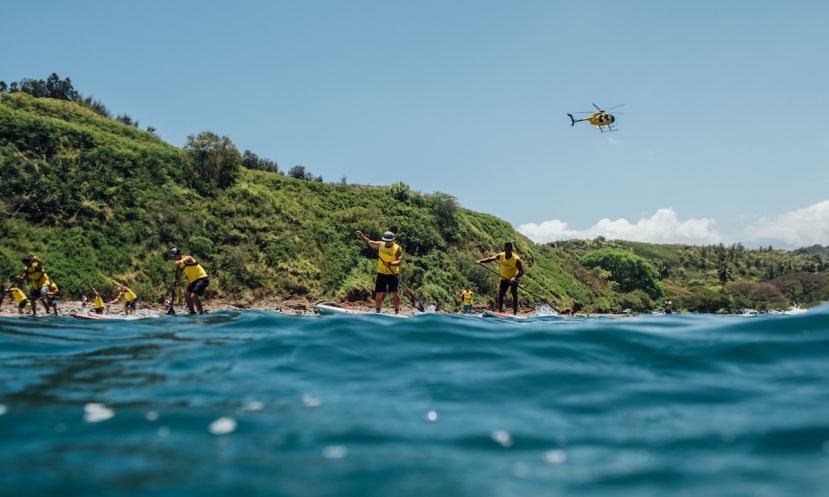 The 8th Annual Olukai Ho'olaule'a couldn't have been more perfect. | Photo via: Olukai

KAHULUI, Maui - The 8th annual OluKai Hoʻolauleʻa, a three-day ocean festival that takes place on the coast of Maui wrapped up last night, capping off a jam packed weekend that recognized this year’s winning performances in the leading international downwind paddling competition. The races hosted participants from all over the globe including the sports leading elite SUP and OC1 competitors.

Around 1500 people turned up to cheer on the competitors, enjoy Hawaiian games and cultural activities, and listen to award winning reggae band, The Green, play an impromptu hour-long acoustic set. While OluKai’s Hoʻolauleʻa is one of the world's premier ocean paddling races, the event also honors the Hawaiian culture and ocean lifestyle.

Ocean conditions on the Maliko Downwind Run on Maui's North Shore were perfect the entire weekend with consistent 20 knot winds that produced what is being hailed as the ‘most epic conditions ever for this race. The Elite Men's SUP division was dominated by 22 year-old Maui paddler, Starboard athlete Connor Baxter, who clocked 47:41 with a 5:58 mile average for his fifth consecutive win. The Men’s OC1 was won by Australia’s Travis Grant (NSP), for the first time, with an impressive 48:06 finish among an elite field of competitors.

The women’s divisions both provided new champions this year. In the Women’s SUP, SIC Maui's Sonni Hönscheid, hailing from Germany, who has competed in this race four times, even placing second last year, took home the championship title with a time of 57:12. Maui local Lauren Spalding claimed the win in the OC1 event with a time of 53:25. Spalding has competed in this event three times to date and has won each time.

The OluKai Hoʻolauleʻa continued yesterday for over 100 OluKai ʻOhana who participated in a 'Giveback Day' lending a hand to Maui Cultural Lands, a grassroots land trust organization, as part of Ama OluKai Foundation’s mission in Hawaii. OluKai Hoʻolauleʻa will be filmed in HD and broadcast internationally courtesy of OluKai media partner, Ocean Paddler TV.

To see more news from the 2016 Olukai Ho'olaule'a, click HERE.

OluKai is a sought after lifestyle brand that believes everyone, no matter where they are, can live Aloha. OluKai products feature thoughtful design elements and handcrafted details inspired by the ocean lifestyle. We are committed to partnering with best-of-class retailers with whom we share an unwavering pursuit of excellence. OluKai's spirit is shared by others through the Ama OluKai Foundation, a 501(c)(3) created to formalize the company’s giveback initiatives. Every OluKai sold supports Ama OluKai Foundation’s mission in Hawaii. For more information visit www.OluKai.com or #AnywhereAloha.