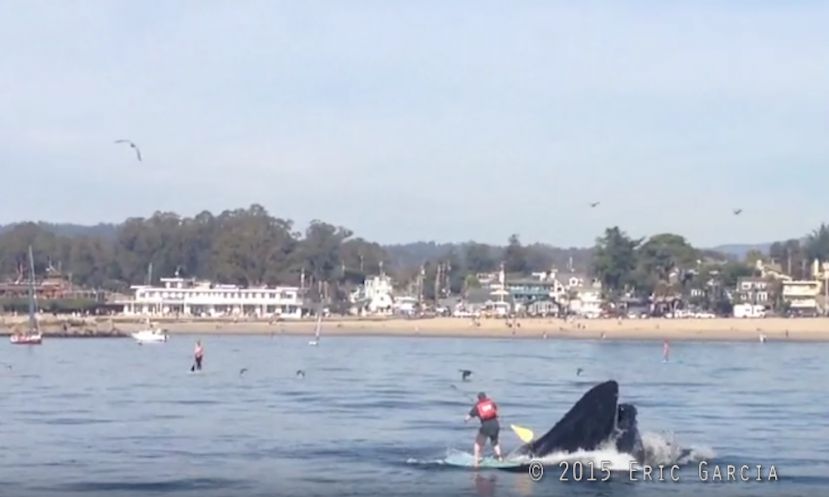 SANTA CRUZ, California - In what can be seen as a very dangerous encounter that could have ended in disaster, one paddle boarder now has the story of a lifetime. While paddling in the waters of Santa Cruz, California, one paddler almost got swallowed (literally) by a humpback whale. Eric Garcia, who captured the video of the encounter describes in detail what happened on the morning of November 24, 2015.

“Sunday morning was anything but ordinary. A beautiful morning and glassy waters were the stage to an amazing natural spectacle. After sailing for a while, we were coming back to Santa Cruz harbor and found a large aggregation of marine life feeding on fish. Sea birds, sea lions, harbor seals, dolphins and a humpback whale were the predators. After observing the whale surfacing to breathe several times, we decided to head out. Little did we know that we will see the whale one more time except, this time it came out with its mouth opened and barely missing a paddle boarder who was coming out of the harbor. We could not believe it! He escaped danger twice by centimeters...Fortunately he is ok and we got the action on video!”

Take a look at the video below to see the encounter unfold. What would you do if you were in this situation? We’d love to hear your thoughts in the comments below!

More in this category: « Bstoked Announces Competition for Most Unique Kitesurf, Surf and SUP Experiences 5 Reasons Why You Should Take Your SUP On Holiday »