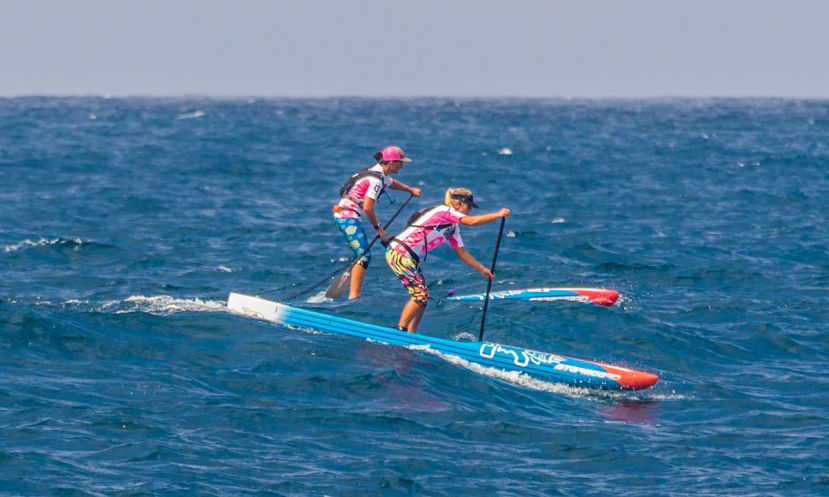 New Zealand's top female paddlers are expected to put on quite a show. | Photo: Georgia Schofield

OREWA BEACH, New Zealand - Aotearoa New Zealand. Land of the Long White Cloud, world champions and the infamous Kiwi ingenuity. Where Starboards rule the beaches and the Ace is Queen.

If you need to see it to believe it, and you're up for a challenge before the Northern Hemisphere season kicks off, come and join the Kiwis 11-12 March 2017 for the NZ SUP Nationals, New Zealand's premier SUP event, featuring a two-day festival of Stand Up Paddle board racing that brings together paddlers from all over the country and the world.

Top talent in New Zealand will be on display at the NZ SUP Nationals. | Photos: Tony Mackenzie

With NZ's leading ladies Penelope Strickland and Annabel Anderson going head to head for the first time since Pea's dramatic ISA World Championship win, this is one event the whole world will be watching - a chance for the girls to measure up the competition before they connect again in Carolina, and for the sheer entertainment value in seeing 98% of NZs men to be beaten by a girl (again). We'll be broadcasting live on Sunday 12 March (NZ Time- that's a whole day ahead of the US) from www.facebook.com/nzsupchamps, with updates and highlights broadcast throughout the distance race on Saturday.

Watch it all happen live on Facebook! | Photo: Georgia Schofield

The Magrette 15-18km Long Distance Race on Saturday afternoon will follow an offshore course (as downwind as conditions allow) along the stunning Whangaparoa coastline, just north of Auckland City. 14' and Under Boards for both men and women, and 12'6 for women, and a $1000 prize purse split between the top male and top female athlete. Shorter options on Saturday include the 6-8km and the 3km Flatwater races, and the day wraps up with a catered beachfront BBQ, music and prizegiving at the Orewa Surf Lifesaving Club.

The exciting BOP-style technical course racing in and out of the surf takes place on Sunday. The Saxe-Coburg Mens Surf Racewill be raced in two 4.5km heats to finals, with a 3km repercharge after the heats. Finals distance is 3km. $500 first place.

Men and Women race separately in the trophy events on Sunday, and the Rosie & Harcourts Cooper & Co. Womens Surf Race will be held across two races- both counting for final points- the first 4.5km, and the second 3km. $500 prize money.

The surf races take place amongst a full day of surfboard class, kids racing and flatwater novice events, and a festival of SUP sponsors, music and food at Orewa Beach. All events are open to International competitors of all levels, and the $500 prize money for first place man and woman in each of the two big races can be won by anyone. NZ Champion Titles will be awarded to the top New Zealand passport holder or permanent resident visa holder.

The first annual New Zealand Championships event was held in 2011, and attracted television news coverage across all channels, magazine features and online content, live radio interviews with athletes and a title sponsorship contract with Hyundai New Zealand. SUP was new, interesting, different and had broad appeal to a wide audience.

Since then the event has grown from strength to strength, attracting international athletes from Australia and Tahiti, televised sports documentary coverage on SKY and has expanded from an inaugural 60 paddlers to an anticipated 400 in 2017.

Check out the 2015 event coverage from Sky TV below:

For race board rentals and athlete support (ie transfers, a couch to crash on, place to make your smoothies and fill your camelbaks) contact [email protected]

To find a SUP event near you, click HERE.