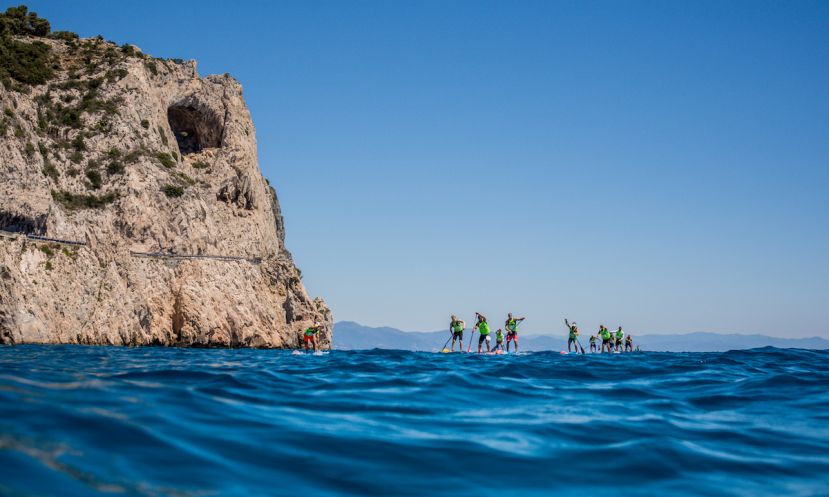 Beautiful weather was present all day for the Noli SUP Race. | Photo via: Euro SUP Tour

NOLI, Italy - The 11th stop of the EuroTour presented by Starboard brought us to beautiful Noli, Italy. With its breathtaking cliffs that come straight out of the sea and the old medieval town literally sitting on the beach Noli proved to be the perfect setup for the first stop of the EuroTour Italian leg.

A great atmosphere of sportsmanship and friendship characterized the first edition of Noli Sup Race, held on Saturday and Sunday July 16th - 17th. An atmosphere that involved everyone - athletes, organizers and the public that gave a warm welcome to the paddlers coming from all over the world. In its first edition Noli SUP Race is set to become a regular event for the European paddlers wanting to race in a stunning natural scenery in one of the most beautiful towns of the Italian riviera.

The event, organized by Franz Orsi with the support of the Municipality of Noli and numerous sponsors, had its magic moment on Saturday with the long distance race of 15 km valid for the EuroTour as well as for the Italian series. Athletes have traveled twice the distance from Noli to the Baia dei Saraceni in a breathtaking setting that fully justifies the definition that has been attributed to this event as the “most beautiful race in one of the most beautiful sceneries in Italy".

The mens race from above. | Photos via: Euro SUP Tour

With competitors from Italy, Germany, France, Netherlands, Czech Republic, Spain, Latvia but also from Australia and the Caribbean islands of Guadeloupe and St. Croix, the race was hard fought. The Italian contingent, however, with the duo Leo Nika (Starboard) and Paolo Marconi (RRD) started to set a fast pace from the very beginning breaking away from all but the Frenchman Martin Letourneur (Hobie). The group will stay together for most of the course until Leo Nika found the right moment to strike again leaving behind his fellow paddlers during a grueling upwind stretch.

At the end of the second lap, taking advantage of the downwind leg, Leo extended his lead even further winning by a comfortable margin over Paolo Marconi in 2nd place. Leo and Paolo concluded then yet another time this year in first and second place at a EuroTour event, positions that demonstrate the great state of form of both of them. Leo is also the athlete with more victories of the entire circuit EuroTour 2016.

Martin Letourneur has proven to be very competitive throughout the race with a good pace in its preferred conditions, the downwind but succumbed to the attacks of Paolo on the last upwind section to finish in 3rd place. Soon after came another Frenchman, Jeremy Teulade (Starboard) who proved to be the strongest of the pursuers, finishing 4th demonstrating that his win in Belgium a few weeks before was not a fluke. Immediately after him came Martino Rogai (Jimmy Lewis) ending in 5th place with Giordano Capparella (BIC) in sixth. Davide Codotto (3BaySUP) that managed to stay with the leading group in the first round, has succumbed in the second round - also because of a mistake at a mark - finishing seventh. In 8th Claudio Nika (Starboard), the younger brother of Leo, who is following his Leo’s footsteps rapidly. 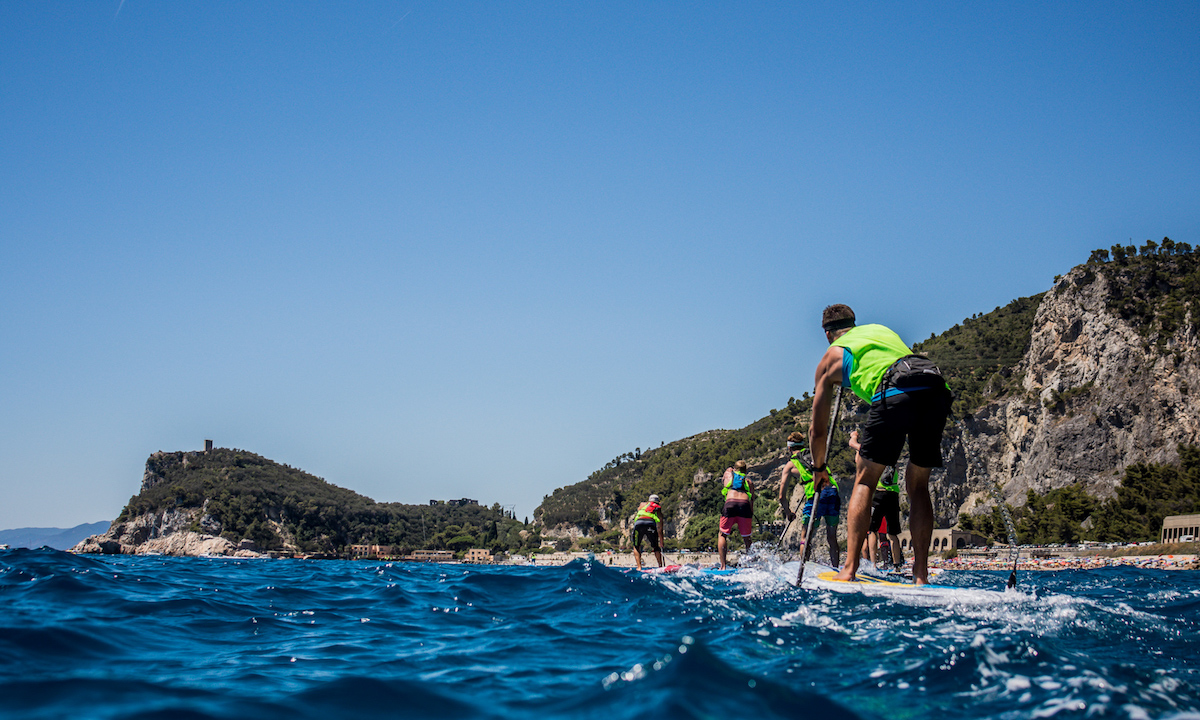 Among the women the Spanish Susak Molinero (RRD) backs up her extraordinary run of form by winning her third stop of EuroTour this year and defeating the rising French talent of Amandine Chazot (Starboard) who set a very fast pace during the first lap. However, the Spanish resident in Italy did not let herself be intimidated by the French and started attacking in the second half of the course to win comfortably. Third place for the emerging talent Chiara Nordio (RRD) who beat Erika Barausse (Jimmy Lewis).

A high-octane competition for Sunday's Sprint races were valid for the Italian championships. It was only 500 meters, but at full throttle, which required technical skills and a great mastery of the medium to get around the tight turns of the course. The race (which was held a few meters from the shoreline) in numerous hits kept in suspense and involved most of the public thronged at the nearby beaches. 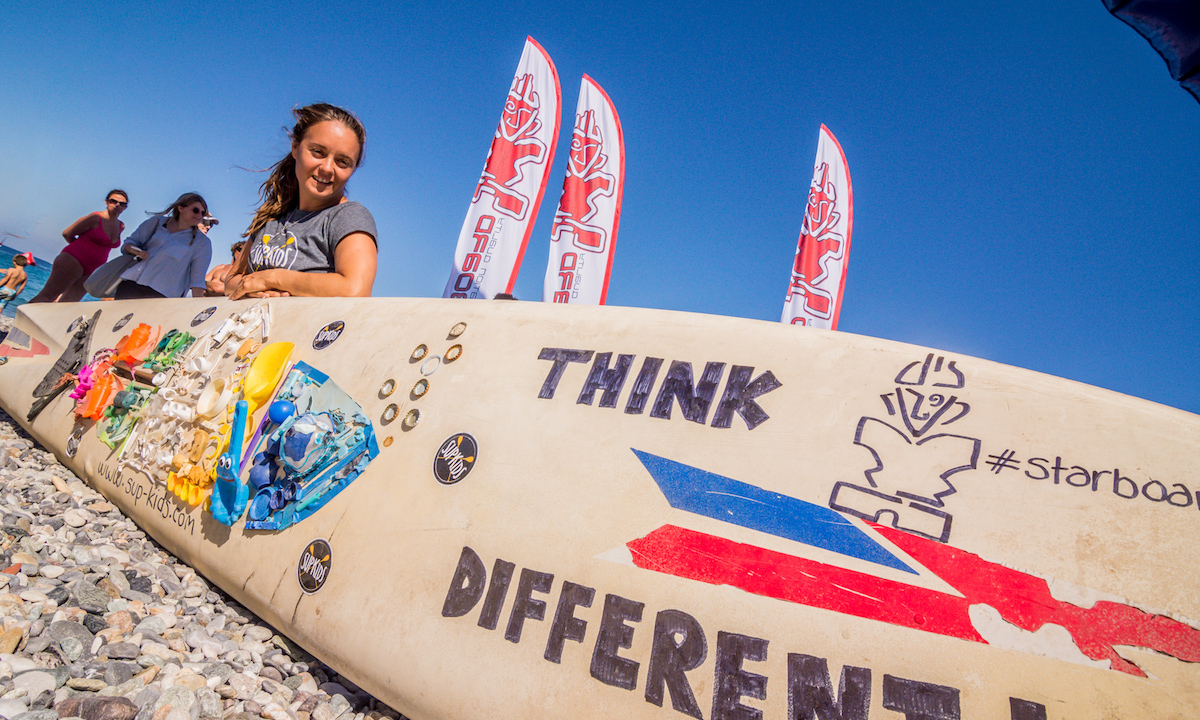 Besides the two main races of the Eurotour long distance and the Italian Sprint Championships, the first edition of Noli Sup Race proved to be a fantastic event for the amateurs and the recreational paddlers too. Two beautiful days of stand up paddle, with many side events ranging from the free Sup Yoga sessions to the amateur group races on the mega inflatable boards provided by the organization to the first tournament of Sup Polo ever held in Italy, all sponsored by Starboard Italy. Pros and amateurs really had a blast during the whole weekend.

Noli SUP Race is not only about racing and fun activities for grown ups, in fact during the event it was presented for the first time in Europe to newly born SupKids program, with the presence of the founder of SUPKids itself, the English surfer Linzi Hawkin. This innovative program, supported by Starboard, is designed to teach children the basics of the sport, but also something much more important for them, namely the respect for the sea and for the environment and the essential values ​​of the sport and sustainability. A message that informed the whole Noli Sup Race event that aims to be the first environmental friendly, zero-impact surf and stand up paddle event in Italy for the years to come.

Check out the video recap from the event below.

More in this category: « Is Paddle Board Boxing The Next Big Thing? One Week Left To Vote For Your SUP Favorites In 2016 Supconnect Editor’s Choice Awards »