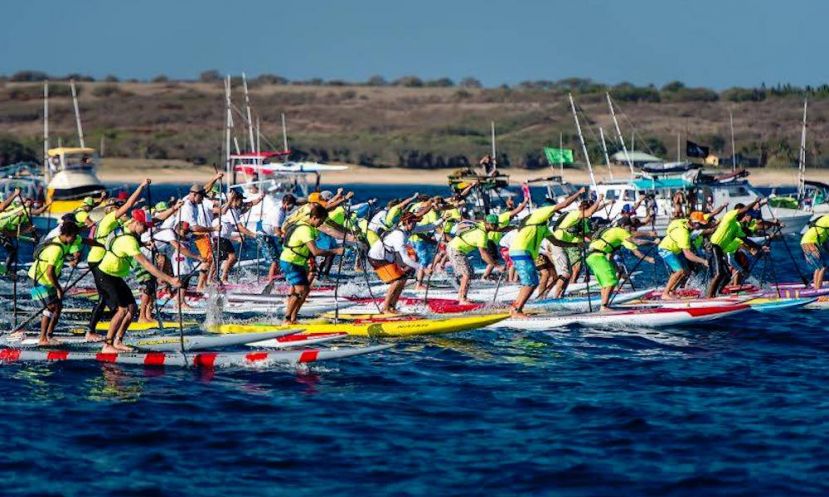 HONOLULU, Hawaii – When the last athlete crosses the finish line on Sunday, July 31, 2016 at the Moloka’i-2-O’ahu Paddleboard World Championships (M2O), two decades of outstanding performances and personal accomplishment will be recorded by a lineage of the world’s strongest paddle boarders. Presented by Kona Longboard Island Lager, the 2016 event welcomes a host of athletes from 16 countries who will test their navigational skill and athletic strength across 32-miles of open ocean in the disciplines of stand-up (SUP) and prone paddle boarding.

Video: "The Arrival" - Legends such as Tom Carroll and Dave Parameter give their insight into the "channel of bones" as finishers tackle the huge surf at China Walls to finish the grueling 32 mile open ocean Molokai 2 Oahu Paddleboard World Championships.

The elite athlete field of men and women set to lead the charge into the history books is made up of a deep field in the prone division, representing the race’s roots before SUP gained popularity. Head-to-head battles by current and former champions highlight both the men’s and women’s SUP divisions.

Prone paddle boarding is where it all began for M2O and the men’s field is likely the most competitive field compiled in race history. Aside from the lone American, this year’s race will be an all-Aussie slugfest.

The unlimited category will see two friends turn competitors in a duel to the finish. After winning the 2014 edition of M2O with the sixth fastest men’s time on record of 4 hours, 52 minutes, 2 seconds, Australian Matt Poole returns from missing the 2015 race due to injury. However, Poole still had a stake in the race as he coached his friend and fellow Australian Ironman Matt Bevilacqua to victory in 2015. Bevilacqua, then 23, won M2O in his first-ever attempt at crossing the Molokai Channel in 5:20:13 under less than optimal conditions.

Also in the mix of likely favorites are Australians Cam Cole and Kendrick Louis, and American Lockwood Holmes. Cole, 28, took second at M2O in 2013 in the unlimited division. After winning the stock category last year, Louis is taking a shot at the unlimited title. Holmes, 33, is the 2014 Catalina Classic winner and the only American who could break the 15-year Australian winning streak in the unlimited category. 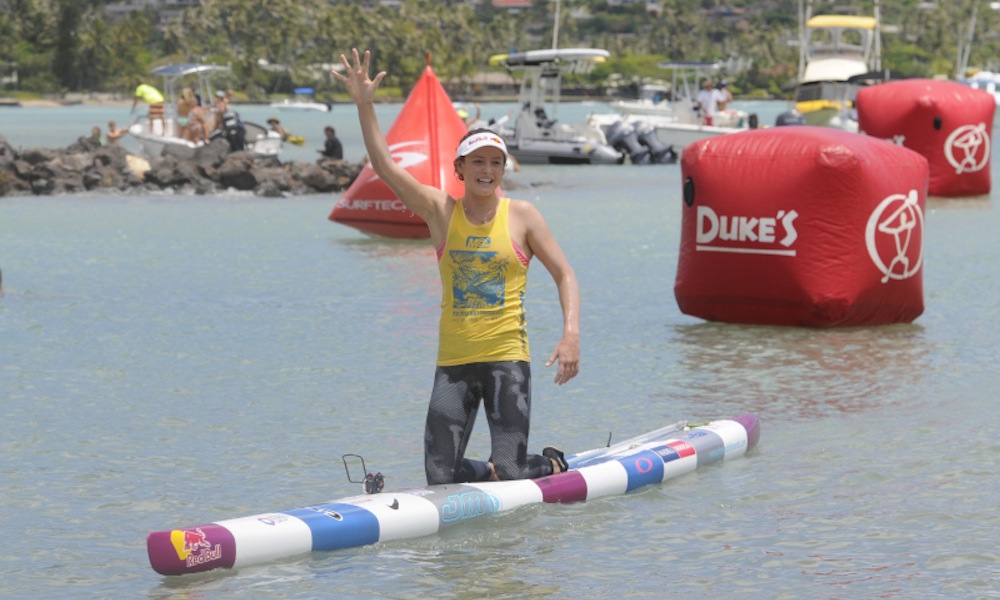 Rumors from down under are that Lincoln Dews is on a tear competitively. At 20-years-old the young Australian rounds out what will be strong showing in the men’s unlimited race. The men’s stock paddleboard category features two-time champion and course record (5:12:35) holder Jack Bark. The 22-year-old Bark and fellow Californian Tuffer Marsolek, 34, will have to ward off a loaded Aussie squad for top honors.

As the current Catalina Classic stock champion, Australian Lachie Lansdown is an M2O veteran at just 20-years-old. He finished second at M2O in 2014 in 5:16:44. Lansdown is joined by countryman Fletcher Davies and Nicholas Fox. Last year, Davies finished third in a tightly grouped men’s race to edge out former M2O champion Zeb Walsh and Fox. Stewart McLachlan, 28, could stir things up for his younger counterparts as a three-time Australian board paddling champion.

The womens’ prone race is highlighted by Jordan Mercer’s continued dominance as the reigning champion, having taken home five consecutive titles. To date, no woman has been able to muster a challenge against Mercer since she won her first M2O in record-setting fashion (5:22:31) in 2011. However, this year could be made interesting with the entry of Elizabeth Pluimers. At 29, Pluimers is the current Australian Ironman champion.

American Carter Graves, 24, is back eyeing her second M2O title in the stock category after her win in 2014. She will be up against Colleen Tessler, 37, from Hawaii who won last year and finished second to Graves two years ago.

There are two names that have dominated the men’s SUP division over the past five years at M2O. Starboard SUP’s Connor Baxter has three titles to his name, one being the course record of 4:08:08. NSP’s Travis Grant is the current M20 champ with two titles (2013, 2015). The accomplished paddler Grant became the only person to win both the Molokai to Oahu Solo OC1 race and M2O over the past year. Both Baxter and Grant return to the unlimited category without Naish’s Kai Lenny, who is entered in the stock category, but that doesn’t mean Lenny is out of overall contention. In 2012, Lenny finished third overall in the SUP division on a stock board. 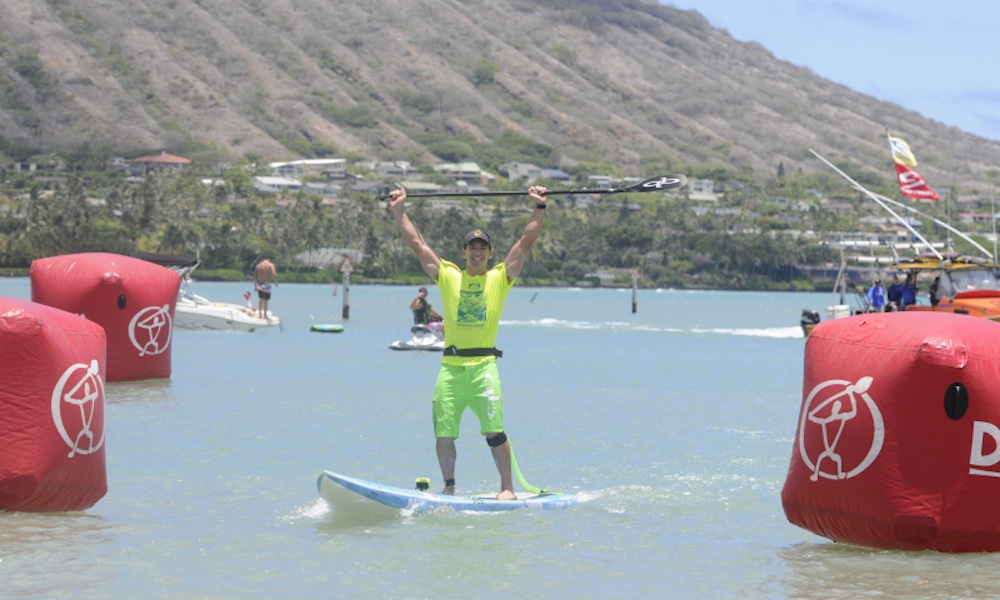 Australian Matt Nottage, 21, is coming off a third place finish the recent Maui to Molokai race against Baxter and Grant. After finishing sixth at M2O last year, he could be a threat for top honors. SIC Maui’s Andrew Logreco from Hawaii had repeat wins in 2010 and 2011 at M2O in the stock category. He will challenge Baxter and Grant this year on an unlimited board.

A strong Hawaiian contingent will push the stock race, featuring current champion Travis Baptiste, 19, and former champ and stock record holder Kai Lenny, 23. Given their past performances they are the likely favorites, but factor in 2015 teammates turned competitors this year with the entries of Danny Ching, 33, and Kaihe Chong, 26. The two managed a convincing two-person team win last year, but now they need to take their sprint skills the entire distance and things could get interesting.

A new entry that could upset Hawaiian dominance in this category is Australian Rory Chapman who is going SUP after finishing third in last year’s unlimited prone race. Like many of the top Aussie watermen, Chapman is a talented SUP athlete. At 13, Riggs Napolean was the youngest paddler to complete M20 solo. Now 18, Napolean could be a threat for a podium finish according to race director Mike Takahashi. 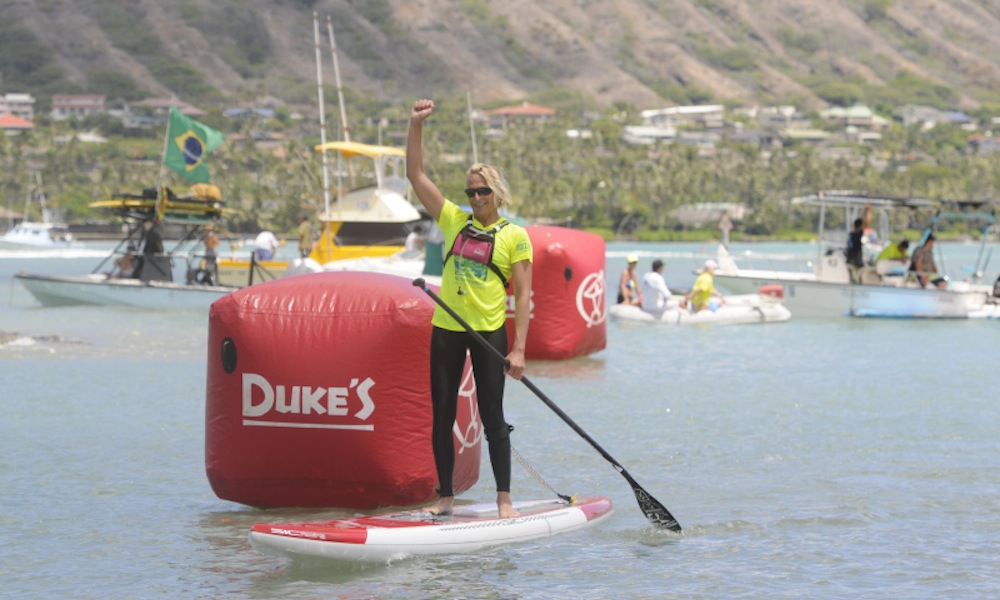 A well-deserved win for Sonni Honscheid in 2015. | Photo Courtesy: M2O

SIC Maui athlete Sonni Hönscheid, 33, leads coming to the women’s race having kept the M20 title in Germany for the past two years. But, she will be up against Terrene Black, 33, who won M20 in 2013. Also in the mix is SUP Think Tank’s Annabel Anderson, 35, who finished second in the overall standings. Paddling a stock board, Anderson was close behind Hönscheid on the longer unlimited board. Anderson will be looking to close that gap. New Zealand’s Penelope Strickland, 36, could make this her year after finishing third in 2014 and second in 2015 (third overall behind Anderson’s stock victory).

Race favorites Jenny Kalmbach, 33, and Andrea Moller, 35, have most experience in the Molokai Channel and hold the best chances for Hawaii to reclaim the title. Kalmbach has consistently placed at M2O since her 2009 win. Moller holds repeat titles from 2010 and ’11 and has the second fastest finish time of 5:09:12.

About the Molokai-2-Oahu Paddleboard World Championships

Founded in 1997, M2O is an open-ocean endurance paddleboard challenge, featuring racers in both the prone and stand-up (SUP) divisions. Connecting the islands of Moloka’i and O’ahu, the 32-mile race crosses the Ka’iwi Channel, also known as the Moloka’i Channel. Men and women from more than 20 countries face challenging conditions as they navigate the fastest downwind route over one of the deepest channels in the world. Top athletes typically complete the crossing in less than five hours, riding mid-channel waves that can crest more than 12 feet and carry paddlers hundreds of meters. The race starts on Kaluakoi Beach on the north shore of Moloka’i and finishes in Maunalua Bay on the south shore of O’ahu. M2O has grown from a grassroots challenge for the legendary lifeguards and watermen of O’ahu to the premiere event in the sport of paddleboarding. The annual race is a deeply personal experience, challenging every paddler’s physical and mental toughness. Every finisher experiences an individual championship.