Awards
updated 8:00 AM PST, Jan 29, 2021
Headlines:
SUP Surfing - Things To Know: Ever wonder what you need to know when i
Weekly Recap 1/26/2021: Welcome to the Supconnect Weekly Recap,
Accessories You Need For Your SUP: There are tons of tools, gadgets and acc
20 SUP Brands Worth Following On Instagr: We love that brands share their awesome
How To Position A Fin On A SUP: So you know how to install your fin into
World’s Largest SUP Events: Every year SUP athletes and enthusiasts
Paddle Boarding Costa Rica: The one country that has cruised its way
Weekly Recap 1/19/2021: Welcome to the Supconnect Weekly Recap,
Top 5 Beginner Mistakes to Avoid: We all make mistakes, especially as a be
Surftech Develops New Innovative SUPs to: World-renowned board manufacturer Surfte 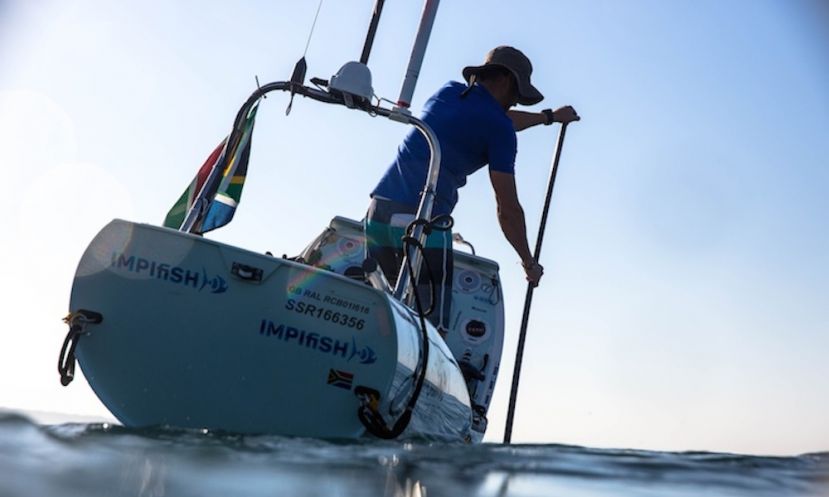 34°W, Atlantic Ocean - Today, Friday, January 27, 2017, Chris Bertish, internationally acclaimed Speaker, Big Wave Surfer and Guinness SUP World Record Holder, reached the monumental 34°W mark, in the Atlantic Ocean. This brings him in line with the easternmost point of mainland South America, in his attempt to become the first person to ever stand up paddle across the Atlantic Ocean, during The Sup Crossing presented by Carrick Wealth.

Chris Bertish began this mammoth undertaking 51 days ago on December 6, 2016, launching from the mainland of Agadir, in Morocco, paddling in a south westerly direction past the Canary Islands on December 20. As the New York Times reported on, the entire journey will take Bertish across an estimated 4,000 miles of open ocean, alone, paddling the equivalent of over a marathon a day for over 90 days straight.

In the first 16 days of the expedition, despite harrowing weather conditions and numerous major technical challenges, Chris still managed to break the previous, solo, unsupported and unassisted open ocean distance world record of 180 nautical miles, previously set by Bart de Zwart (Tahiti and Bora Bora in December 2014). Chris has gone on to set a new 300-mile open ocean world record, while also becoming the first person to ever paddle between the mainland of Morocco and the Canary Islands. Every day since, Bertish adds to the new world record and has now traveled over 1,750 miles by reaching 34°W longitude.

Chris Bertish, a true waterman is no stranger to big adventures. Named the winner of the Nightjar Adventurer of the Year award in South Africa in 2014 and runner up for Global Expedition of the Year in 2014 at the International SupMag Awards, he believes no challenge is ever too great or impossible. He attributes his many years of meticulous planning, preparation, sailing, big wave surfing experience, coupled with the vast knowledge he has gained from multiple Atlantic crossings, as invaluable assets to the overall success of the Sup Crossing. Chris was part of Trinidad and Tobago’s, Crash Test Dummies Sailing Team in the late 1990s, which won the Antigua Sailing Week, in Caribbean. This happens to be the same location where Chris will be finishing his monumental expedition, which he hopes to arrive at first two weeks of March.

Recently Chris caught up to and then surpassed two of the Pure Solo Class row boat competitors, Daryl Farmer and Dmitry Rezvoy of the Talisker Whisky Atlantic Challenge. Farmer and Rezoy departed on their journey from Canary Islands one week prior to the SUP Crossing launch.

ImpiFish, the one of a kind, customized, stand up paddle board craft designed specifically for the Sup Crossing by Chris, took many key aspects and design concepts used by the Talisker Rowing Teams on their transatlantic row boats. When the weather proves too much, Chris is able to hide in his cabin to escape the elements and even if the craft capsizes, it can self-right completely unassisted. Chris’ craft has been put to the test several times already in his voyage including one complete capsize and being semi-inverted twice.

Chris and most transatlantic voyagers rarely set course on the shortest route as it would take them into light and variable winds found the Atlantic. This is why the 20° North, 34° West mark is an important milestone, as he is now directly in the trade winds and due North of the most Eastern tip of South America.

“We are extremely proud of what Chris has achieved thus far, already breaking a number of world records. It has been remarkable for us at Carrick Wealth to watch his journey. He has shown immense tenacity in the first half of the SUP Crossing and we are excited to see him achieve even greater things in the next few weeks. Whether at sea or in everyday life he completely lives by his motto: Nothing is impossible!” said Craig Featherby, CEO at Carrick Wealth.

“The main goal of this project is to push the limits of what's possible for the sport and for what the human spirit can endure, while inspiring others to believe in themselves and what's truly possible,” said Bertish. “We are changing the lives of millions by paddling smiles across the faces of less fortunate children in Africa and South Africa, with the money we raise for this incredible project.”

The SUP Crossing crosses the Atlantic Ocean, while leaving a sustainable legacy by raising enough funds for: The Lunchbox Fund, Operation Smile and Signature of Hope through the annuities we have set up, with the target of raising over $1,124,150 US Dollars, but simultaneously making the entire project, a completely self-sustainable charity initiative, that will have a lasting legacy by paying out monthly, for more than two decades and for generations to follow.