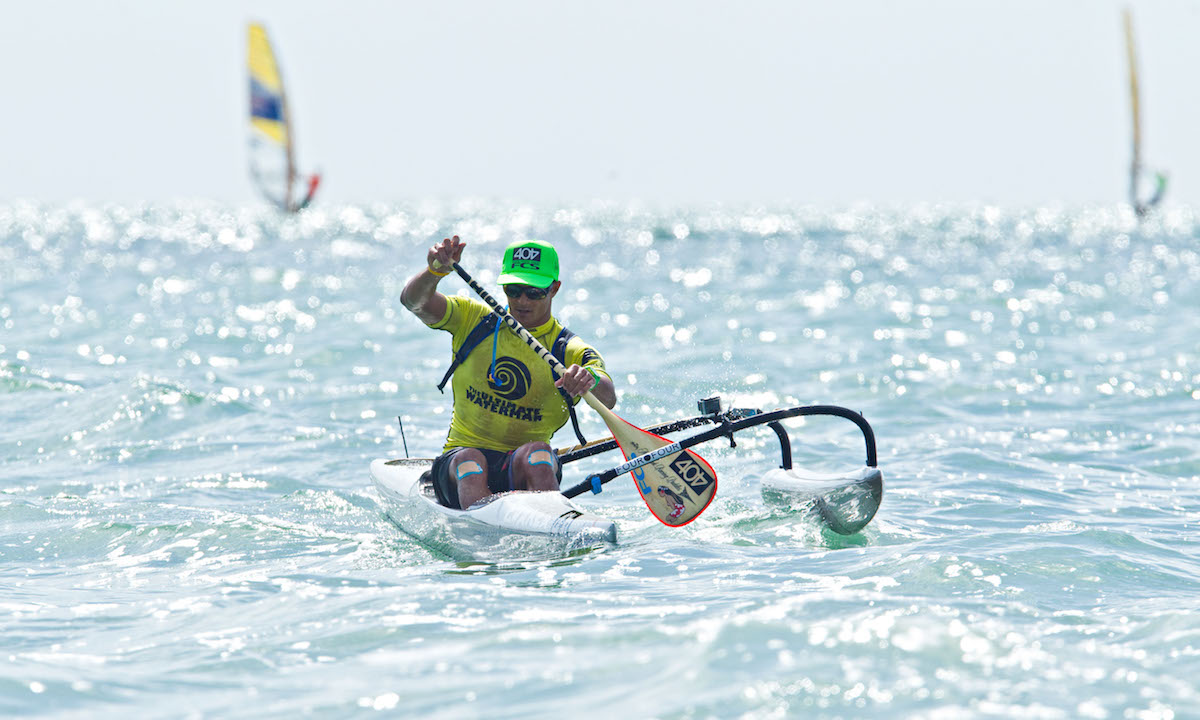 AUCKLAND, New Zealand - Californian paddler Danny Ching (USA) has claimed the first discipline of the 2016 Ultimate Waterman event in empathic fashion beating his opponents by a whopping eight minutes in the 16km Outrigger Canoe Race held at Takapuna Beach today. Ching finished the race in a time of 1:26:12. The Outrigger Canoe is Ching’s double whammy discipline which means he secures double points for his win. Ching won the discipline at the inaugural Ultimate Waterman event in 2015.

Placing second was Starboard SUP’s Connor Baxter (HAW) who held off a spirited battle from Australian athlete Mark Visser. Visser showed a phenomenal improvement from the 2015 event where he placed second to last in the discipline. The closest battle of the day was between defending event champion Daniel Kereopa (NZL) and Hawaiian athlete Zane Schweitzer. Kereopa appeared to pass Schweitzer 50m from the finish line but as he hit the beach, cramp set in and he had to resort to hopping across the finish line as he watched Schweitzer sprint past him and in to fourth place. Placing fifth through eighth were Manoa Drollet (PYF), Caio Vaz (BRA) and Kala Alexander (HAW).

Check out a video recap from the race below!

The competition continued the next day at Piha Beach, Auckland with the 6km prone paddleboard race. The race started at 12pm and competitors were to complete four laps of a 1.5km course that runs through the powerful waves of Piha. Hawaiian athlete and Starboard SUP team rider Zane Schweitzer paddled his way to a significant win in the Prone Paddleboard race.

The 6km Prone Paddleboard Race was the second of eight disciplines being held in the 2016 Ultimate Waterman event which runs from the 12 – 20 March in New Zealand. The 22-year old from the island of Maui maintained his place at the front of the lead pack for the entire race before breaking away on the last leg of the final lap to take the win by 2:36 minutes in a time of 41:58. After two events, Schweitzer has now jumped to third place on the overall rankings behind FCS SUP’s Danny Ching (USA) who won the Outrigger Canoe Race and Australian Mark Visser.

Schweitzer was charged full of energy after the race. “This race was way more fun than yesterday, today is a race of technique and ocean awareness, reading the ocean and choosing the right path,” Schweitzer said after the race. “I am super stoked to come out on top, this result will play a huge role in my overall result. Plus I learnt a lot, it was a blast!” Schweitzer said. 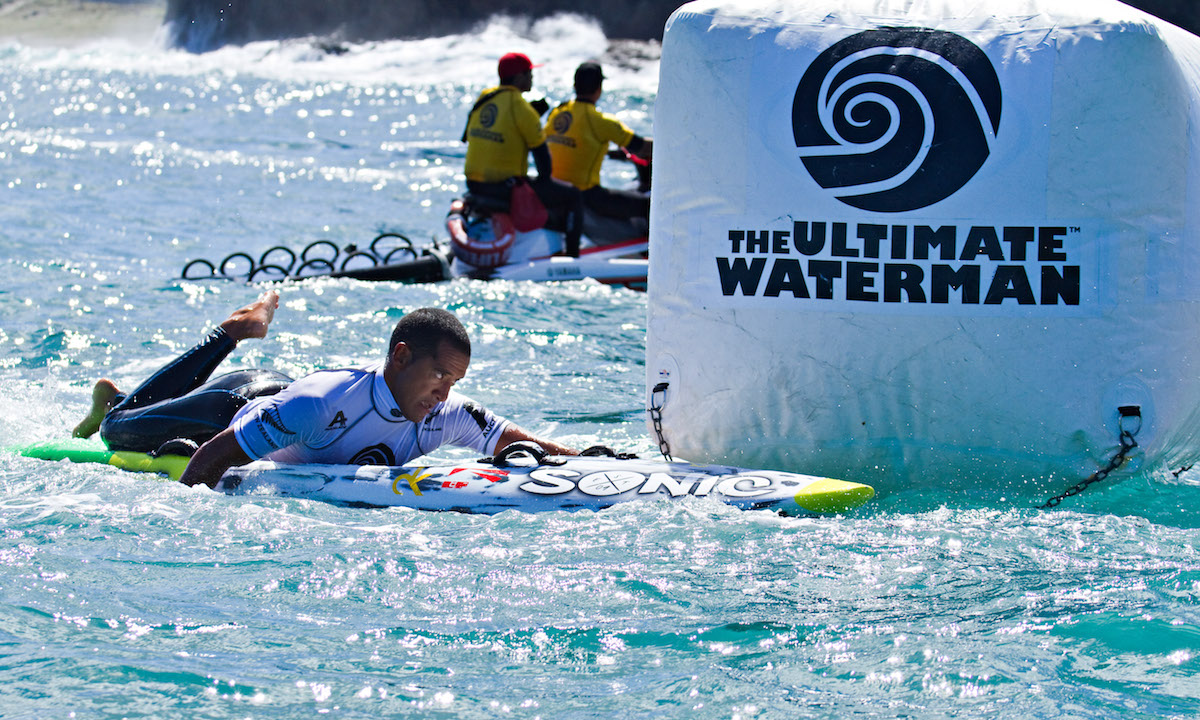 NewZealand's own Daniel Kereopa rounding the buoy and headed for the finish. |Photo: Cory Scott / The Ultimate Waterman

“This race was really different for all of us because nobody specializes in this discipline. In fact, seven of eight athletes had not tried our Dolphin Surf Craft boards until 30 minutes before the race. There was a lot to think about and strategy developed on-the-go,” said Schweitzer.

Today’s race runner-up was double whammy surfer Mark Visser who targeted this event to receive double points. Visser was in the leading pack for the entire race before Schweitzer pulled away for the win. Visser now sits in second place on the overall rankings. Placing fourth today was Brazilian Caio Vaz who had another battle with New Zealand’s own Daniel Kereopa who finished in fifth. Manoa Drollet (TAH) finished in sixth place while Hawaiian Connor Baxter placed seventh. 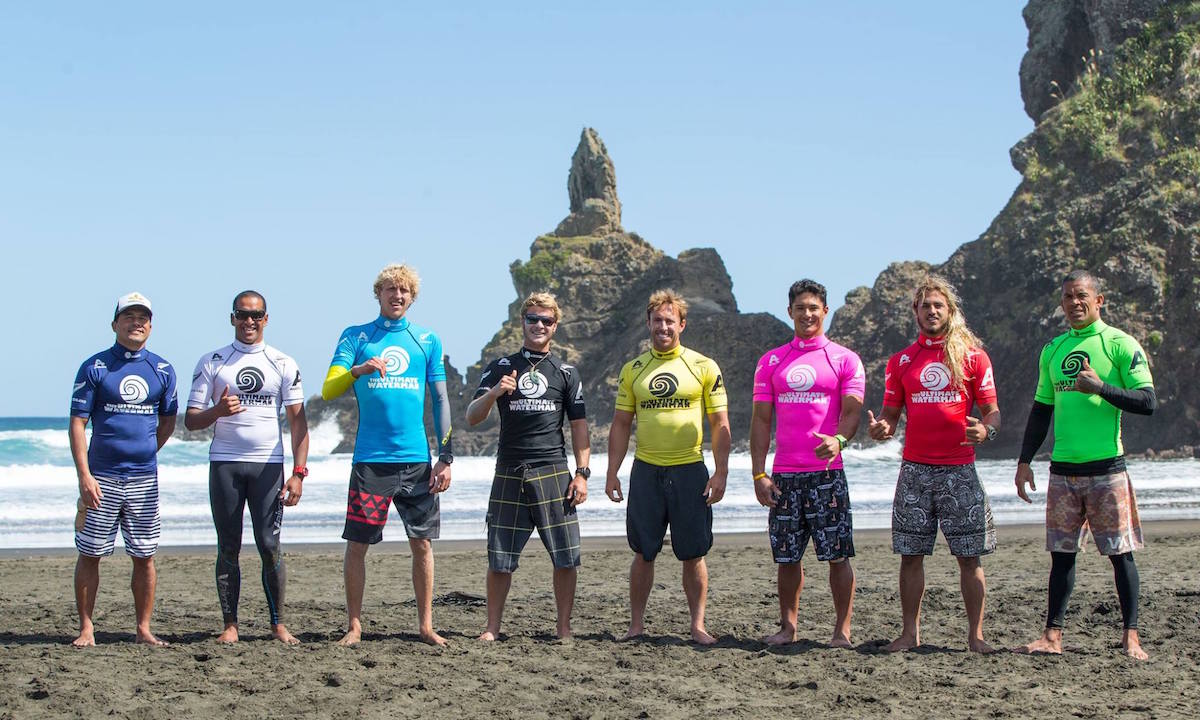 Baxter was looking like one of the form paddlers before a big set of waves washed through the bay, one of which ripped his board from his hands leaving him with 100m swim to shore to pick up his board and dashing any hopes of a top finish. Kala Alexander (HAW) placed eighth in the race and was one of several athletes who are starting to feel the strain of this grueling event.

A travel day is scheduled yesterday and today to find the optimal conditions. The focus turns to wave riding with the shortboard, longboard, standup paddle surf and big wave surfing disciplines scheduled to run. Forecasts are now showing a powerful storm forming under Australia. The storm has already delivered big swells to Western Australia and continues to track east under New Zealand providing several location opportunities for the surfing disciplines. For a video recap of the prone paddle competition, watch the video below.

To see more news and from The Ultimate Waterman 2016, click HERE.