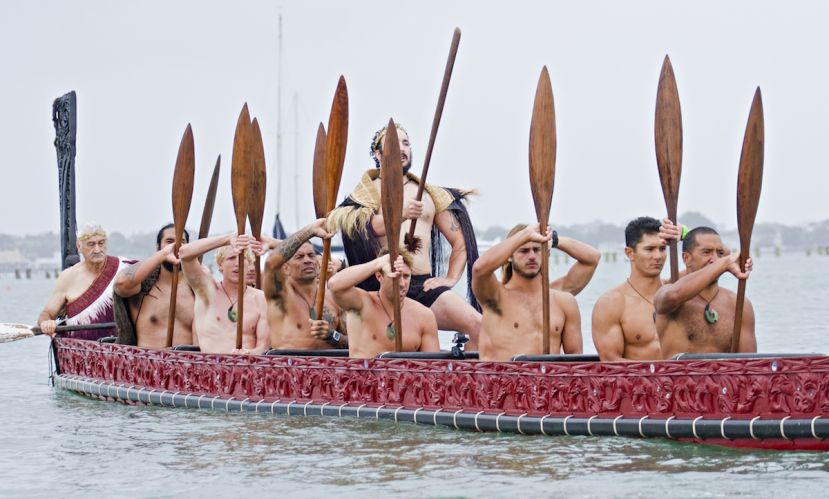 AUCKLAND, New Zealand - The Ultimate Watermen athletes were officially welcomed to Auckland and New Zealand today during a special ceremony that involved the international visitors taking to the water on a traditional Maori war canoe. In the past this experience was reserved for the tribe’s warriors. Now only men who are trained in the traditional ways of Maori culture get to paddle a waka. But today this honour was extended to eight of the world’s best watermen, from Hawaii, Australia, Brazil, United States and Tahiti, in the ceremonial start to The Ultimate Waterman competition.

The athletes paddled the Waka Taua out to meet another traditional sailing vessel, the Waka Hourua. On board this vessel they were officially welcomed by representatives of Ngati Whatua Orakei, the local Maori people. Maori greenstone carvings were presented to the two new athletes for 2016 – Zane Schweitzer (Hawaii) and Caio Vaz (Brazil).

New Zealand Maori and 2015 Ultimate Waterman winner Daniel Kereopa said the ceremony was very meaningful to him and captured the essence of the competition. “We had to work together as watermen and paddle this canoe. Despite being competitors we came together and gelled as a team using the spirit of the Maori and Polynesians,” he said about their waka paddling experience. “Sharing a part of our culture today was a very special moment for me,” said Kereopa.

The athletes paddled the Waka Taua out to meet another traditional sailing vessel, the Waka Hourua. | Photos Courtesy: The Ultimate Waterman

Hawaiian Zane Schweitzer (Starboard) said paddling the waka with the rest of these watermen was an honour and a privilege. “I’m so blown away by the welcoming we’ve received, it’s been amazing,” said Schweitzer.

The competition gets underway tomorrow at Takapuna Beach with the first discipline, the Outrigger Canoe endurance race. On Sunday athletes will contest the Prone Paddle Board discipline at Piha, starting at midday. Each athlete has chosen one double whammy discipline out of the eight being contested, and will be awarded double points in their chosen discipline.