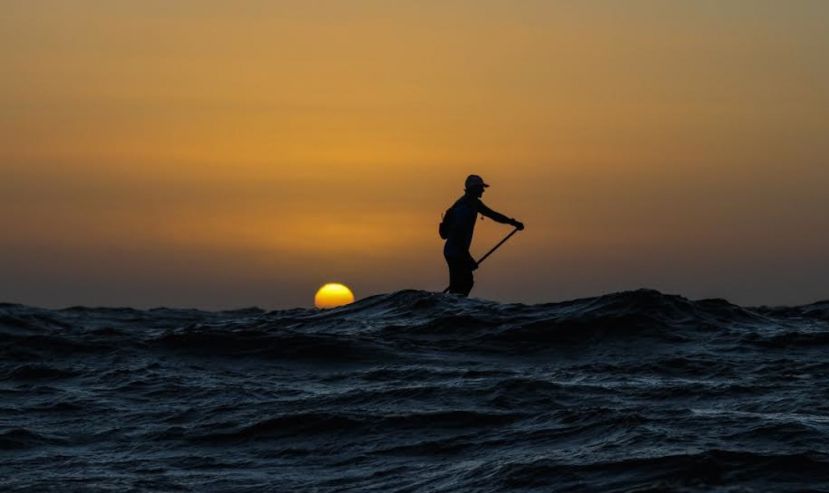 Due to extreme weather and hypothermia, Chris Bertish had to call off his 2nd World Record attempt.

KOMMETIJIE, South Africa - Earlier last week we reported that Chris Bertish, in partnership with Cipla Foundation, was going to attempt a second try at breaking the world record for the current 24-hour stand-up paddleboard (SUP) world record. Unfortunately, due to extreme weather conditions and hypothermia, Chris had to withdraw from his 2nd attempt over 30km into his journey.

After calling it off Chris made a statement regarding the attempt: "The 200km stretch of Atlantic coast line that we are trying to do the 24hr record along is beyond difficult, with our weather conditions being so extreme and volatile to forecast – it’s not called the Cape of Storms for nothing. Last night we had winds in almost every direction possible, changing hourly, cold water, a thick fog bank, one of our two support crafts, the rubber duck, sinking and me being circled by a shark.

Our stretch of coastline is so dangerous and volatile that there really are only realistically a couple of days a year that you might get the perfect conditions in which to conduct this record attempt. If we were doing the attempt in warmer climates, with light consistent breezes and warmer water like the Caribbean or Pacific, it would definitely make things easier. However, that’s all part of the challenge and why no one has done it here before. The 12hour record was much easier to obtain the right conditions for, as it was run only during the day and using our normal Summer trade winds which are consistent, which definitely makes conditions easier to navigate. At night with howling winds, massive waves, no stars, no moon, fog and cold water, it’s a very different story, making the conditions more of a safety hazard and that much more treacherous.

We’ve concluded that the conditions along this stretch of coastline are a major safety risk to manage the elements during the night, due to them constantly changing, which makes it extremely hazardous, in order to safely complete the 24hr record. The current 24hr record of the 157km was obtained on flat water, in controlled conditions. So we have decided to rather postpone the event to the end of this year and look at attempting the record again, but rather on a flat water, in a controlled environment like one of the dams up country, where we can set out a controlled route that will be safe, manageable and not exposed to so many changing and life threatening variables for everyone involved. The other nice part of doing it this way is that people will be able to watch and take part in the record attempt.”

We will keep you updated on all of Chris Bertish's future record breaking attempts and plans.

More in this category: « Sunset Beach Pro SUP 2015, ON for Final Day of Competition Paddle Boarding With Alligators »