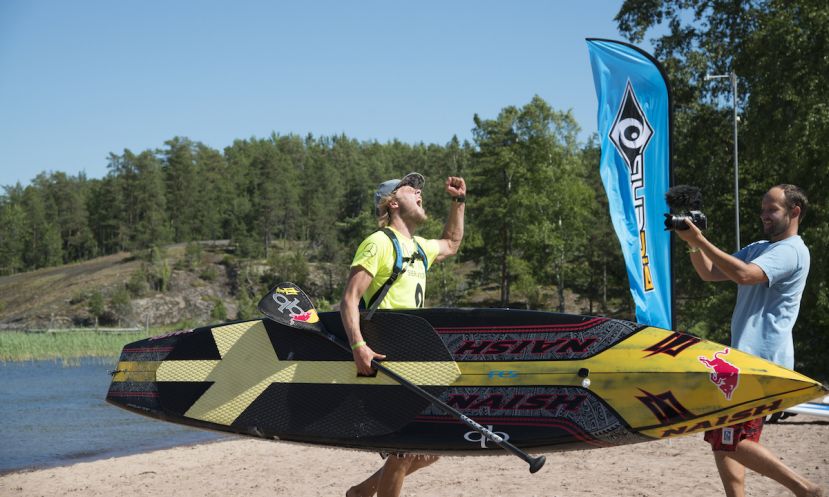 Casper Steinfath put on a dominant performance in the Long Distance Race on Day 1 of the 2015 Sieravuori Masters, Stop #2 of the European Cup. | Photo: Waterman League / Elmeri Elo

FINLAND, Europe - Casper Steinfath (Naish) put on a dominant performance in the Long Distance Race on Day 1 of the 2015 Sieravuori Masters, Stop #2 of the European Cup. The morning dawned with blue skies and a strengthening side shore wind providing epic conditions for today's Long Distance race. The 9.5km course consisted of two 4.75km laps, allowing the athletes to take in the breathtaking scenery, and take advantage of a longer downwind section allowing them to ride bump and surf here in the lakes of Finland.

The Dane had a great start here in the long distance, allowing him to take the lead coming up to the first buoy, and build on it through the 1st upwind leg and through the islands, before turning to the downwind section to capitalize on his lead and get distance between him and second place athlete and 2014 Finland Event Champion, Zane Schweitzer (Starboard). 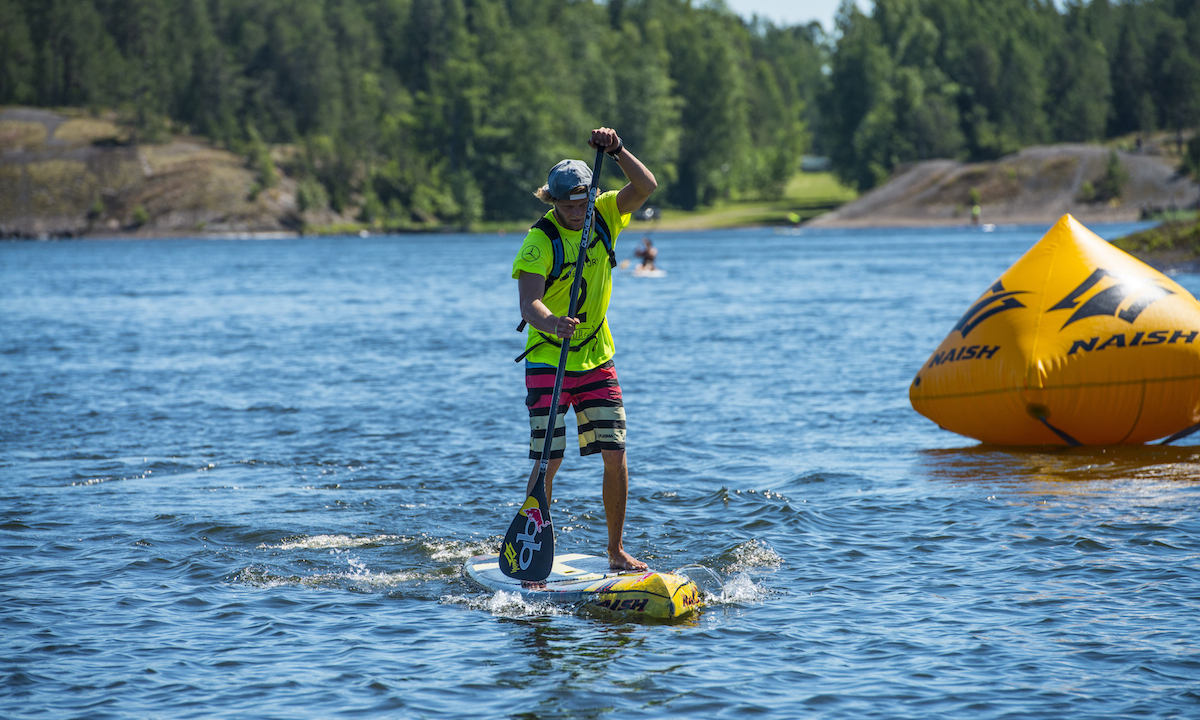 Steinfath had a great start here in the long distance, allowing him to take the lead. | Photo: Waterman League / Elmeri Elo

The two lap course allowed him to further consolidate on his lead, with the only threat being a late charge by the Frenchman Eric Terrien, something that he held off, and then turned on the gas once again, to earn a convincing win in today's race.

BIC SUP athlete Eric Terrien put together a stellar race in today's long distance, staying with the leading pack through the first two thirds of the race, sitting in 4th or 5th place consistently. However, coming down the downwind stretch, Eric saw his opportunity to make headway on those in front of him by taking an inside line - a completely different direction from the others.

While it could have been deemed a risky decision, it paid off in a big way, as when the pack reconnected, Eric had gained so much distance that he was now lying in 2nd place and had even gained a fair distance on the race leader Casper Steinfath. This impressive strategy secured Eric's well deserved 2nd place, much to the dismay of Starboard SUP’s Zane Schweitzer and Leonard Nika, who were unable to catch the Frenchman down the final two legs of the course. 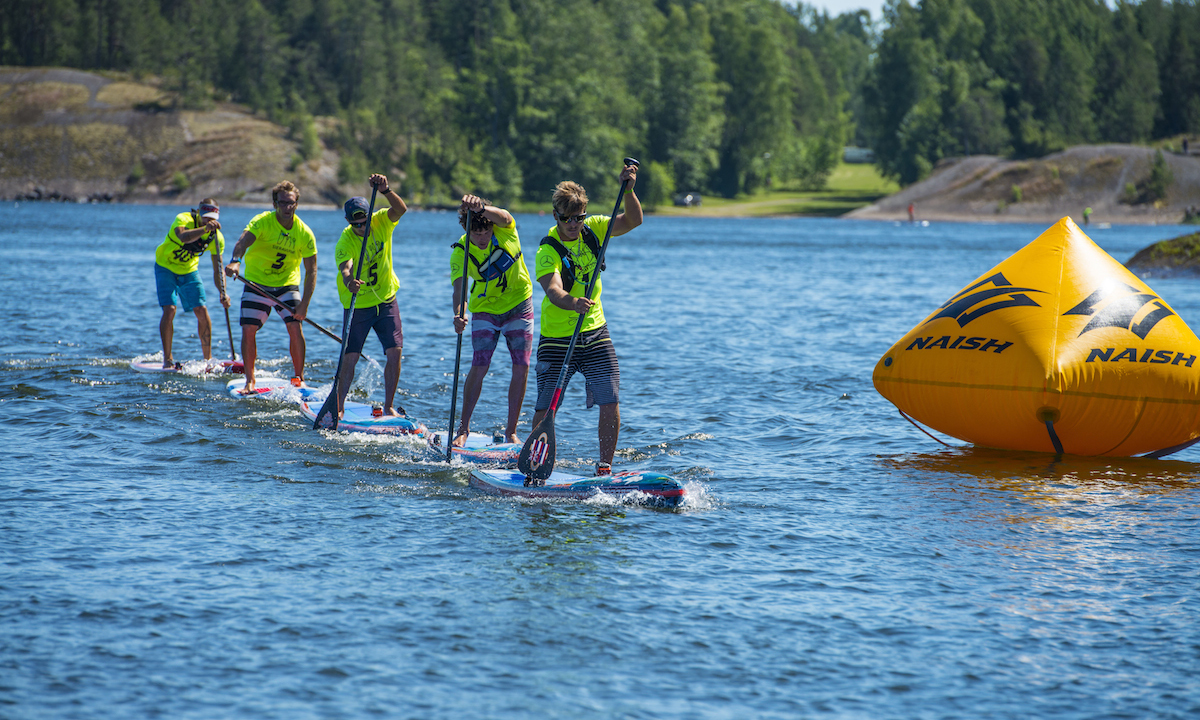 Zane Schweitzer holds onto 2nd through the first two thirds of the race, only to watch Eric Terrien come from behind, slipping to 3rd. | Photo: Waterman League / Elmeri Elo

Zane Schweitzer puts on another solid performance here in Finland, looking to reclaim his event title here, but also the European Cup Title he won in 2014. The race started of well for the young Hawaiian, as he maintained a solid 2nd place through much of the course, trading off with team mate and fierce competitor Leonard Nika (Starboard) throughout the back end of the 1st lap and early part of the 2nd.

However, Eric Terrien's (BIC SUP) strategic move through the second lap forced Zane to have to settle with 3rd place, and the determination to make it back on the 2nd day of competition, the sprint racing, to kick off tomorrow at 12pm Finland time (11am CET). 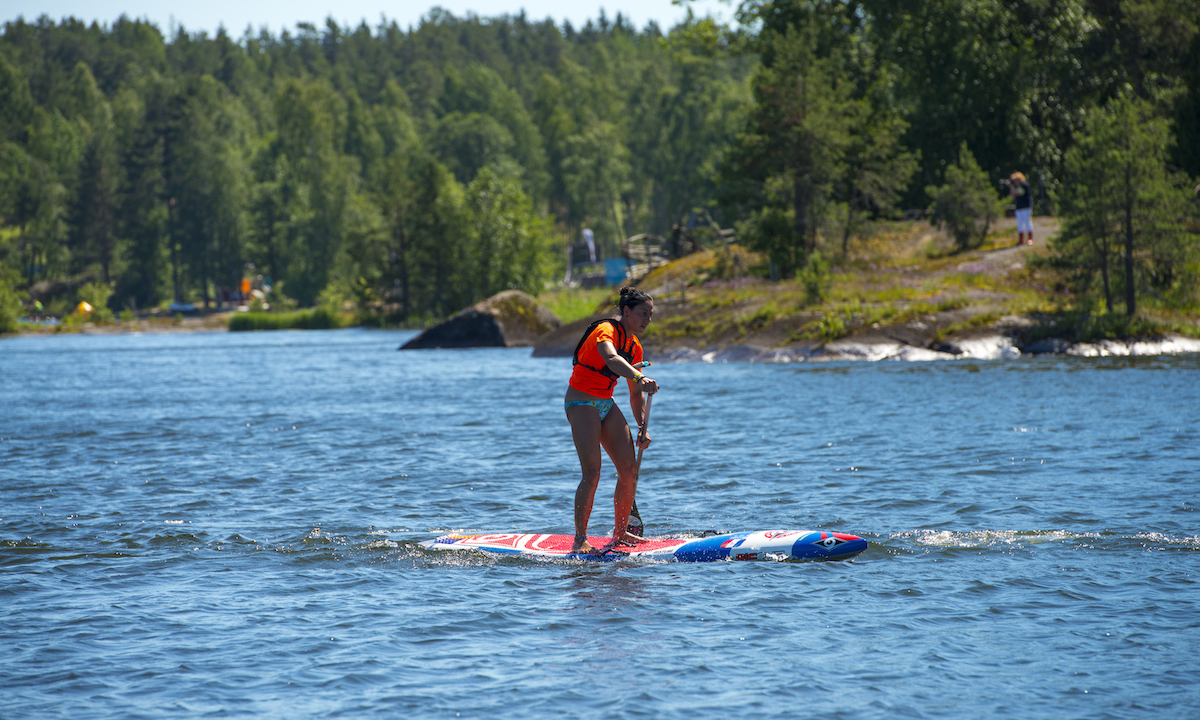 BIC SUP athlete Celine Guesdon has been training hard this winter, and it shows. After a solid 4th place finish at the World Series and European Cup Opener in Barcelona, she had an impressive start and quickly took the lead, a lead that she was able to maintain throughout the race to take the well deserved win in today's Long Distance race. Celine will take an enormous amount of confidence from today's victory as she looks ahead to tomorrow's sprint racing, coming off a strong finish in Barcelona in this discipline too. 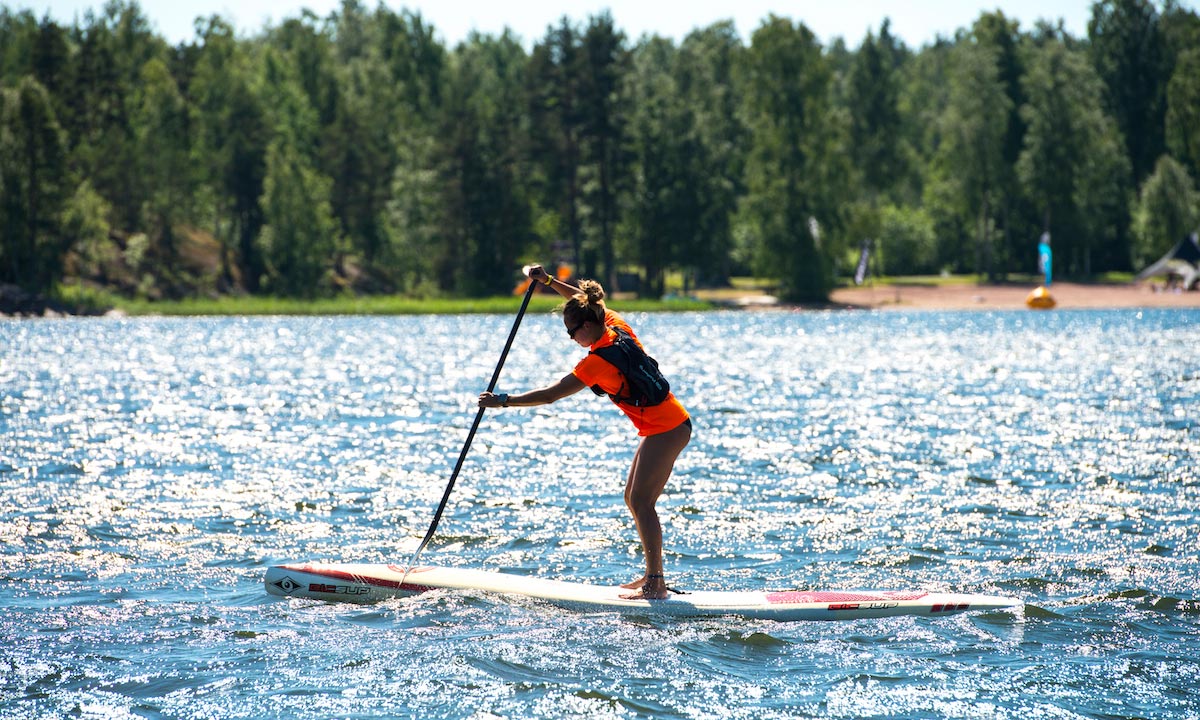 It was certainly not a one horse race today in Finland, as Celine Guesdon was not without fierce compeition. In particular the Spanish standout Ane Zulaika Aranburu (BIC SUP) put on another impressive performance here at the Siervavuori Masters, building off her strong finish in Barcelona last weekend (5th) and clearly a star to watch out for here on the Stand Up World Series. Ane, navigated the course well and will set herself up for tomorrow's sprints well, hoping to take down the impressive French talent Celine, not to mention the remainder of the women's fleet to have a chance at the event victory here in Finland.

To see more news from the Stand Up World Series, click here.

More in this category: « Sunshine SUP Series Event 1 Goes Off Without A Hitch Steinfath and Guesdon Win Again at Sieravouri Masters 2015 »