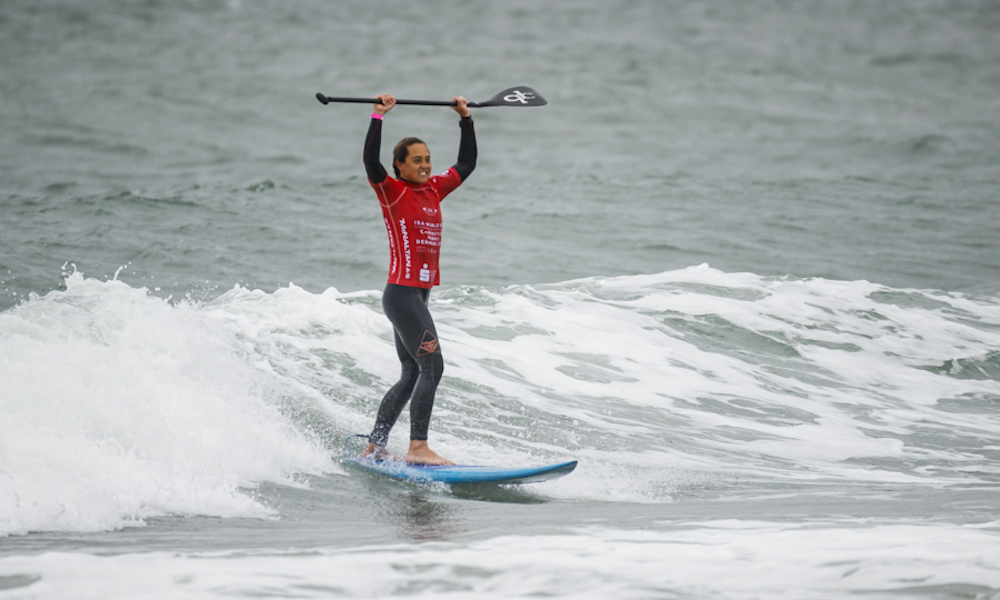 VORUPØR, Denmark - Australia's Shakira Westdorp repeated as the Women's SUP Surfing World Champion, following up on her historic 2016 performance in Fiji, while Brazil's Luiz Diniz burst into the international spotlight in his first appearance in the event, bringing a Gold Medal to Team Brazil at the 2017 ISA World SUP and Paddleboard Championship inVorupør, Denmark.

The two-time ISA SUP Surfing Gold Medalist, Westdorp, expressed her excitement with her teammates on the beach. "I am so stoked! I just want to congratulate all the competitors...The conditions changed from gnarly to pretty good this afternoon, so it was awesome I was able to showcase my skills in varying conditions.

"The level of women's SUP surfing is going through the roof and being on the top of that is pretty special. I am over the moon right now...Team Australia is sitting pretty good in the standings and we have some strong racers coming up this weekend. I am happy that I could earn these points and I think we can take the title out again."

Luiz Diniz, a relatively unknown surfer at an international level, made a name for himself and etched his name forever among the first ISA SUP Gold Medalists crowned in Europe. "I am super stoked for this win", said Diniz. "Thank God for bringing me here and giving me hope. I've been taking it heat by heat and I felt pretty comfortable throughout in my first ISA World Championship.

"I started this journey without big sponsors and thanks to our team, we found the support we needed to come here and I won. This is really special for me and my country." 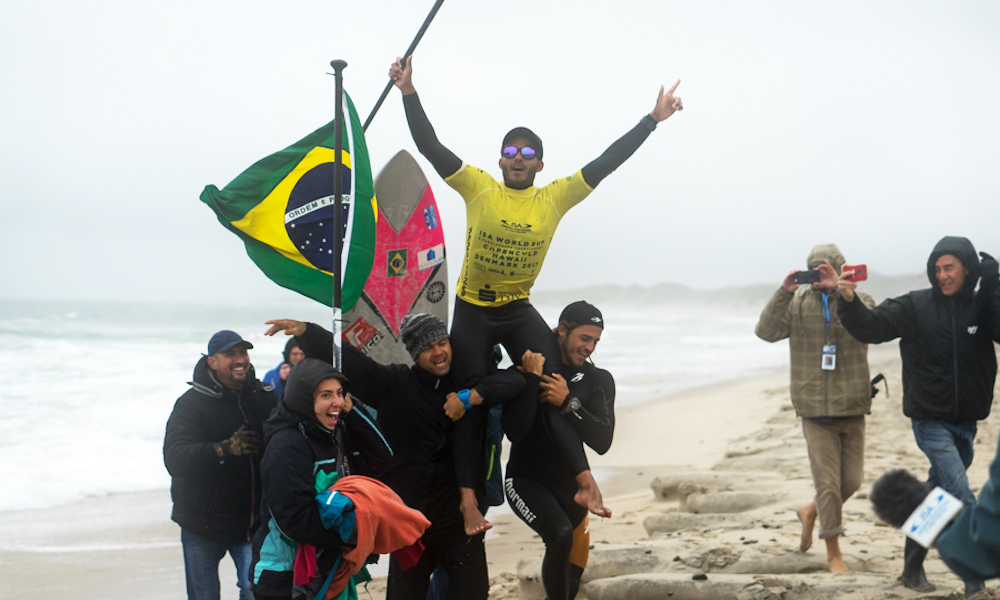 Luiz Diniz getting a traditional chairlift up the beach. | Photo: ISA / Sean Evans

Heading into the final weekend of competition, with just the Technical Race and Team Relay remaining, Team France has held onto their lead in the overall team points ranking. An all-around performance, with medals in the Men's and Women's Divisions from Benoit Carpentier and Justine Dupont, solidly maintained their lead with five medals left to be awarded.

Thursday morning on Denmark's northwest coast known as 'Cold Hawaii' greeted the competitors with blustery, onshore conditions that provided a solid increase of swell into the waist to chest high range. Soon after heats got underway, the wind turned around 180 degrees with a light offshore, creating excellent conditions to crown World Champions.

After a morning of high performance Surfing and national pride radiating from the beach, the Men's and Women's Final took place.

The Men's Final featured the 2016 runner-up Mo Freitas (HAW), Harry Maskell (AUS), Benoit Carpentier (FRA), and Luiz Diniz (BRA) contesting the Gold. Brazil's Luiz Diniz jumped out to the lead with wave scores of 6.77 and 5.70, earning a heat total of 12.47. Hawaii's Mo Freitas threatened Diniz's lead, trailing by less than a point. Freitas made a crucial mistake and committed an interference, which resulted in his second highest wave score being halved and all but erasing his hopes for a Gold Medal. Freitas ended the heat in fourth position with the Copper Medal, France's Benoit Carpentier in third with the Bronze, Australia's Harry Maskell in second with the Silver.

The Women's Final concluded the historic day of competition, with the defending World Champion Shakira Westdorp (AUS) getting off to a blazing start. Her first two wave scores turned out to be all she needed, taking the Gold Medal for the second consecutive year with a heat total of 11.87. France's Justine Dupont earned the Silver, USA's Emily Merrill the Bronze, and Brazil's Aline Adisaka the Copper.

"What an incredible day of competition! This morning the waves showed up, the wind went offshore, and the world's best SUP surfers took full advantage.

"Cold Hawaii lived up to its name, with some cold weather and excellent Surfing conditions. Shakira Westdorp and Luiz Diniz will forever go down in history as the first SUP Surfing ISA World Champions crowned in Cold Hawaii, Denmark, and Europe.

"The Technical Races and Team Relay Race that are set to take place this weekend will define who will emerge as the Team World Champion. Don't miss the action!"

The tentative schedule for the remainder of the event will be as follows:

The event will be streaming live September 1-10 on www.isaworlds.com