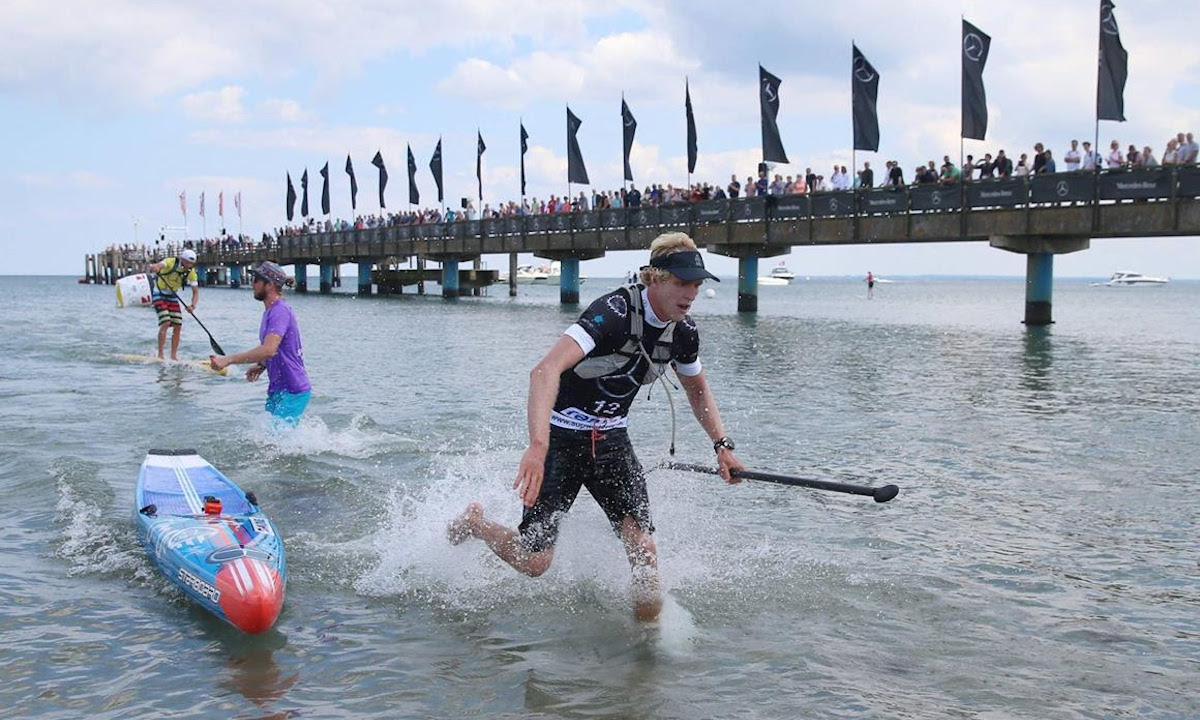 Connor Baxter secures victory at Stop 2 of the 2016 World Series with his 2nd in sprints and 2nd again today in the long distance. | Photo Courtesy: Waterman League

SCHARBEUTZ, Germany - After a crazy day of weather yesterday, it was a complete turn around today, as the sun came out, the wind shifted 180 degrees and blues skies dominated what was a beautiful day here in Scharbeutz, Germany. With a unique lap course featuring the World Series' widely acclaimed Super lap format, the action was kept close to the spectators and strategy came into play providing a number of really dramatic moments during the incredibly competitive long distance race.

After a solid performance in Saturday’s sprints and as a clear favorite coming into Sunday’s long distance, Connor Baxter (Starboard) was hoping to get the edge over the yellow jersey and winner in yesterday's sprints, Casper Steinfath (Naish) to take the overall win and address the balance on the overall World Rankings.

One thing is for sure - he put on an incredible performance in today's race, catching up to Starboard teammate Michael Booth, Jake Jensen (Fanatic) and Arthur Arutkin (Fanatic) after their strategic use of the super lap saw them gain ground and take the lead. He then battled with his teammate Michael and France's Arthur until the final feet of the race, with the run to the finish seeing him in a very close second place.

While Connor would have wanted the win in the distance race, 2nd place was enough to see him take overall victory here at the Mercedes SUP World Cup, Stop 2 of the 2016 Stand Up World Series as he notches up another phenomenal performance and keeps himself as one of the major frontrunners for the 2016 World Title. 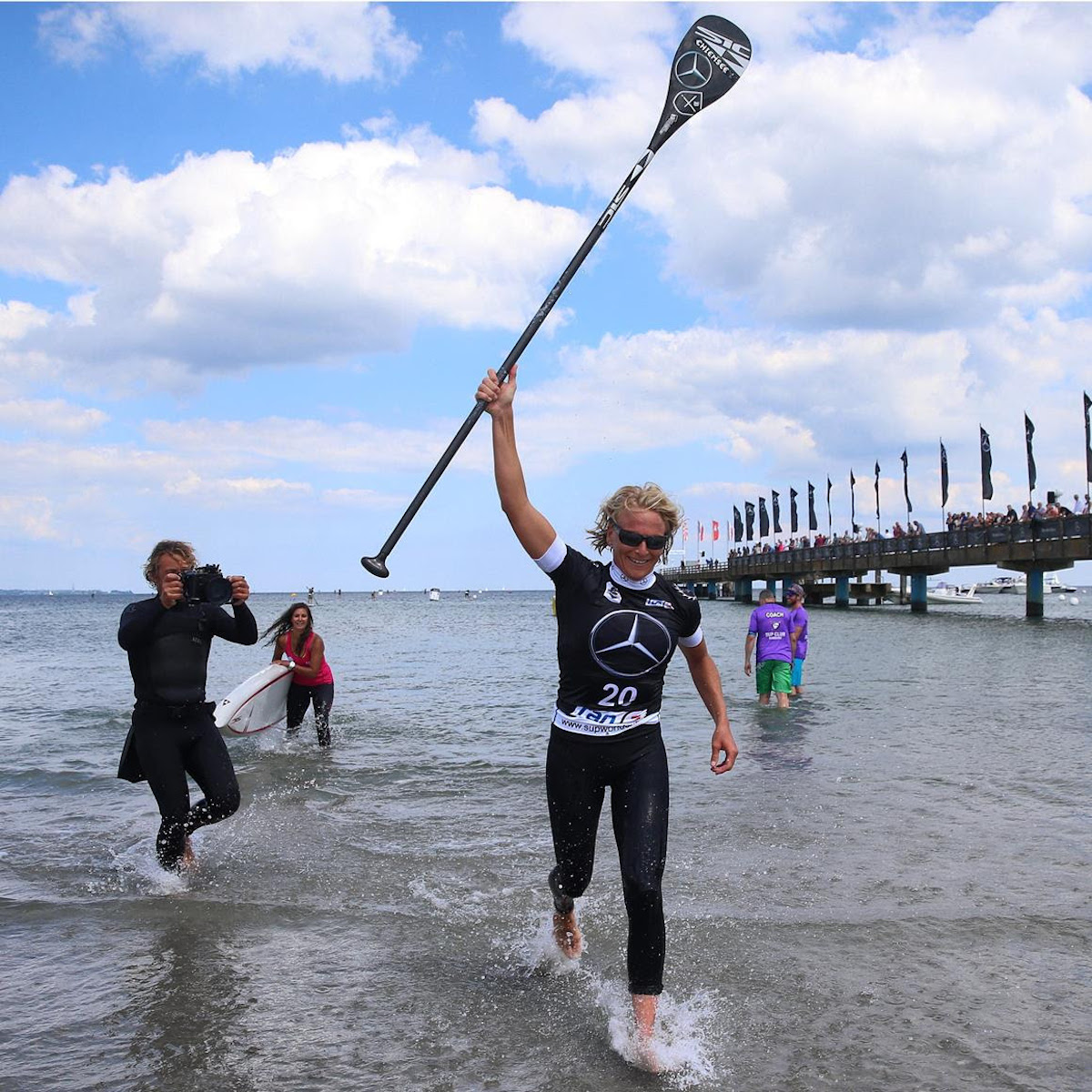 SIC Maui athlete Sonni Honscheid came into this event as the clear local favorite here in Germany: well established as one of the world's fastest paddlers, Sonni had the crowd behind her, but conversely she also had the pressure of the country well and truly on her as she stepped up to do battle at stop 2 of the 2016 Stand Up World Series. After a second place in yesterday's sprints, she knew it was all or nothing today, and she did just that - put it all in and came away with an impressive win amidst a World Class field and getting the best of current yellow jersey, Fiona Wylde (Starboard).

Leaving the super lap buoy until the final lap proved a successful strategy for Sonni, as she let Fiona break away early on the super lap and gain more ground over the forthcoming laps to where her final super lap she was able to turn the buoy in front of the young American talent. As anticipated, her victory was met with overwhelming applause from the local crowds, as this win meant that Sonni had also clinched the overall event title here in Germany. 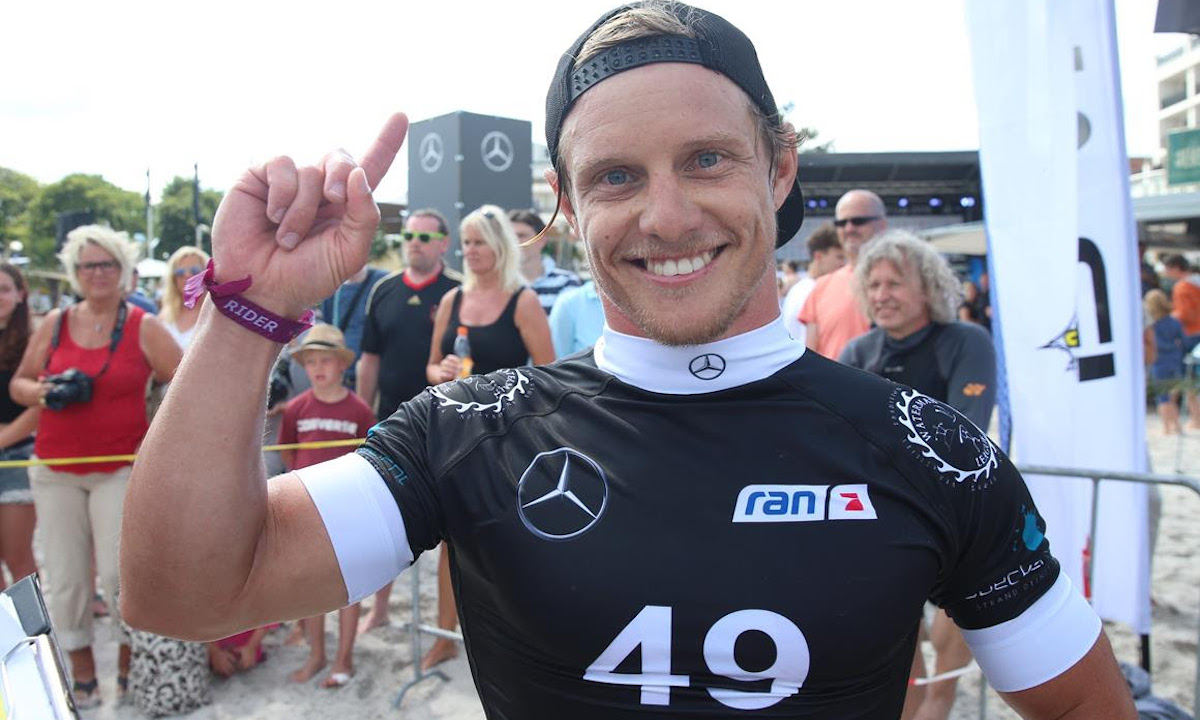 Starboard Dream Team athlete Michael Booth has been on a tear this year, proving himself to be one of the most dangerous distance paddlers in the world, with a close second to his Starboard teammate Connor Baxter in the distance race in Japan to start the year in style. He had a disappointing finish in the sprint racing in Japan due to a slight hiccup in the earlier rounds, and was looking forward to redemption here in Germany. However, day one did not go quite as planned for the talent from down under, with another small slip up causing him to exit earlier than he would have liked in the sprint racing.

Day two dawned bright and beautiful, and once again, Michael rose to the challenge, not only powering his way around the 7-lap course, but using strategy to gain advantage over his competitors and in the end get the edge over Connor in the final feet to the finish line. It was a great performance from Michael on Sunday and no doubt a sign of things to come, as he becomes increasingly dangerous on the international scene as one of Australia's great hopes. 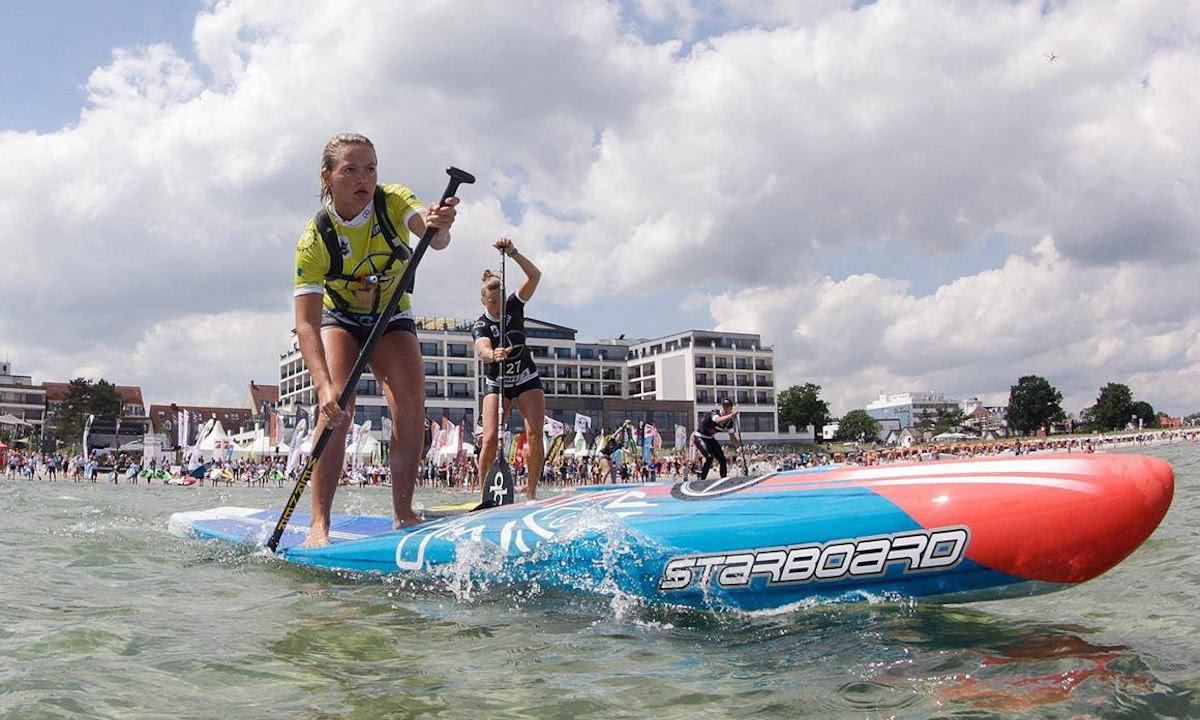 Fiona Wylde puts on another stellar performance, but has to settle for second in Germany, but hangs on to the ratings lead. | Photo Courtesy: Waterman League

There is no doubt that Starboard and Werner Paddles athlete Fiona Wylde only gets better and better, as she continues to assert herself at the very highest level regardless of the discipline or even sport. Here in Germany it was no different, as she put on a dominant performance in Saturday’s sprints, and while she fell short of Sonni Honscheid in the long distance Sunday, a second place overall secures her well deserved spot at the top of the World Rankings after stop two of the 2016 World Series. 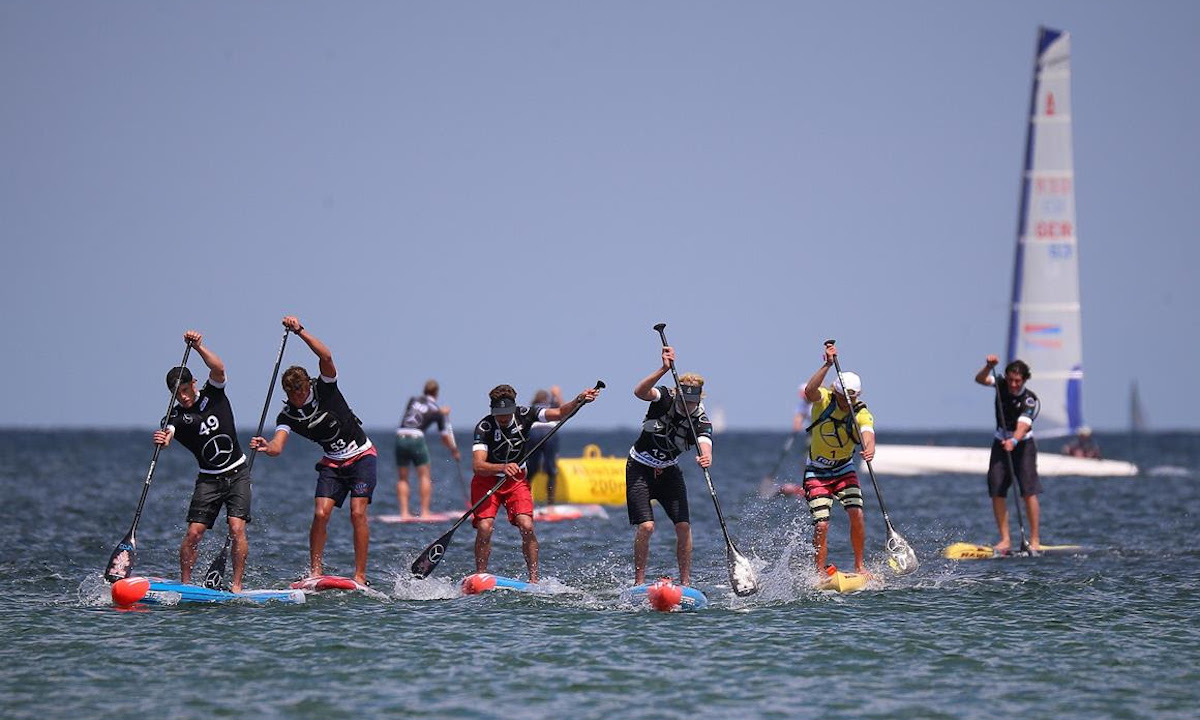 Naish’s Casper Steinfath would have loved to continue his winning roll through stop 2 of the World Series here in Germany, and he was well on the way to doing just that after his impressive performance in Saturday’s World Series Sprints. However, it was a star studded field in Sunday’s racing, and everyone seemed as hungry as the next, making for an exceptionally competitive field. While Casper put on a solid performance and stayed with the leaders through to the finish, he had to settle for 4th place in the long distance, a result that allowed Connor Baxter (Starboard) to sneak through and secure the win overall here in Germany.

Despite letting Connor through, Casper maintains the lead in the Overall World Rankings and so will still be wearing the yellow jersey coming into stop 3. 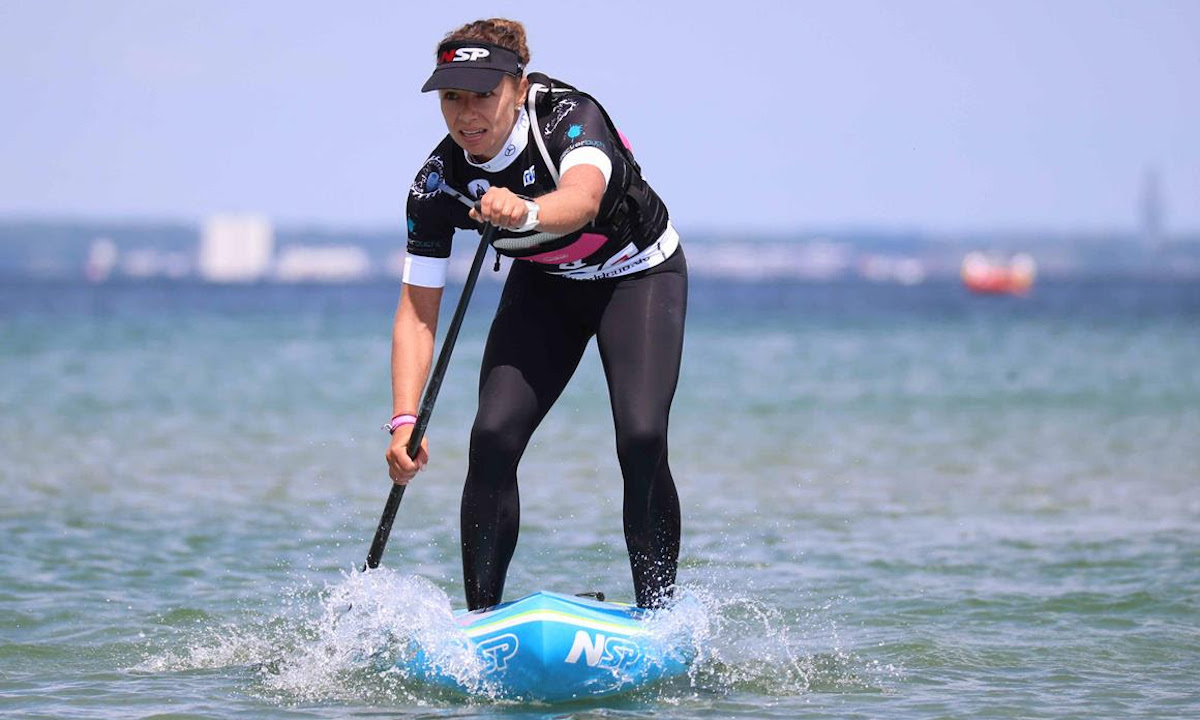 Susanne Lier has proved herself as a major contender with a solid finish on day 2 of the 2016 Stand Up World Series in Germany. | Photo Courtesy: Waterman League

As a German National, Susanne Lier (NSP) felt right at home here in Scharbeutz, and it showed, as she secured 4th place in the sprints on day 1 of the Mercedes-Benz SUP World Cup and then went onto finish in 3rd in Sunday’s epic long distance battle. While the fight for the event title was between Fiona Wylde and Sonni Honscheid, Susanne was able to hold off the impressive Emma Reijmerink (Naish) to take 3rd place overall for the event. Susanne is no doubt a face to watch out for in the future. 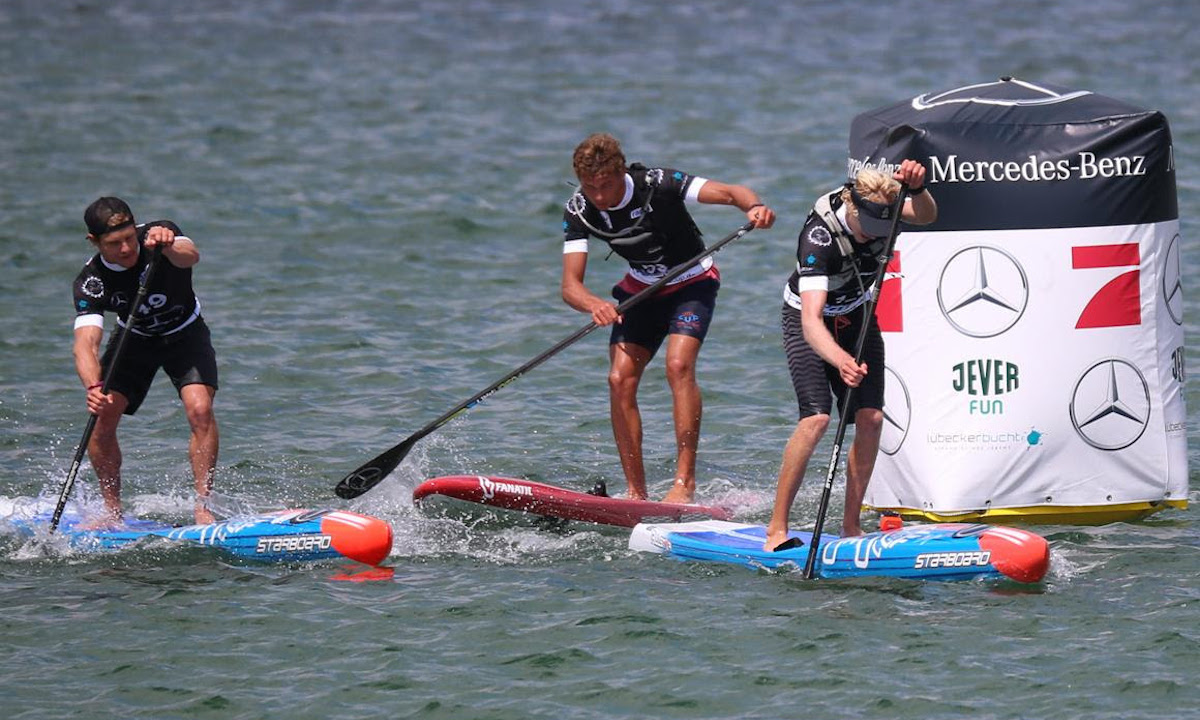 Arthur Artukin (Fanatic) never ceases to impress, as he continues to go from strength to strength on the Stand Up World Series with another stellar performance here at the Mercedes SUP World Cup in Germany. Day one saw him make his way through to the final, inclusive of clawing his way back into the running with a win in the consolation final (the top two earning the last two spots in the final) after a hectic 2-day road trip to make it up to Scharbeutz.

However, Sunday saw Arthur come into his own, as he kept with Michael Booth and Jake Jensen (who unfortunately was forced to retire as a result of a broken paddle in a close exchange with friend and fellow Aussie, Michael Booth) throughout the race, pushing the final two right up to the finish line to finish in a well deserved 3rd place.

This 3rd place finish propelled him into 3rd place overall for the event, and as a result, 3rd place overall in the World Rankings after stop 2 of the 2016 World Series. There is no doubt that Arthur is a rising star and is a major threat to watch out for over the coming years.

The Mercedes-Benz SUP World Cup delivered a dramatic weekend of racing and a memorable event for spectators and competitors alike, celebrating its new home in Scharbeutz and giving a sign of things to come for the World Series in Germany. Scharbeutz proved the ideal venue for the event and as a nucleus for the sport in Northern Germany, with its beautiful shoreline providing all the ingredients for everything from World Class competition to entry level participation. Despite crazy weather during the sprint racing on Saturday, Sunday brought the location to life as the World Series long distance provided the ideal spectacle for the crowds lining the Pier and the shoreline.

A big thank you to Mercedes-Benz, Act Agency and all the partners of the Waterman League for this epic 2nd stop of the 2016 Stand Up World Series. We look forward to returning to Scharbeutz in 2017 for the next chapter of this all important European stop on the World Series, the Mercedes-Benz SUP World Cup. In the meantime, stay tuned for all things World Series at www.watermanleague.com

To see video highlights from all the action, watch below.