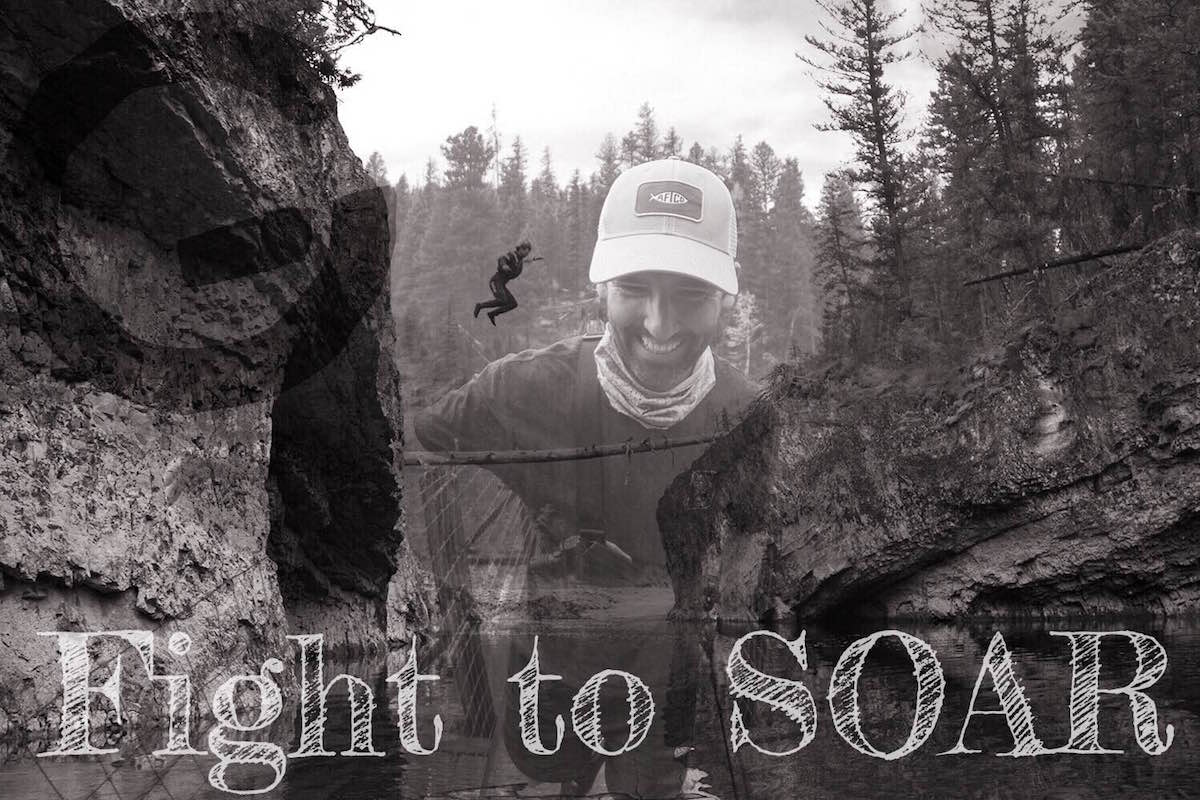 NORTH WESTERN, Montana - In the beginning of October 2015 Gabriel Gray along with Jackson Berger and Casey Shedd packed via horseback with all inflatable SUPs and began the journey of a lifetime. The trip was completely off grid, without any reception, full of crazy adventure, and a test of grit and endurance due to unexpected water levels. Here, Gabriel Gray recounts his Supconnect Polls winning Journey for his adventure down the South Fork Flathead River in Montana.

After months of planning and postponed dates due to wildfires the 2015 Fight to SOAR Montana expedition presented by AFTCO and sponsored by Optrix, Garmin, Watershed drybags, Southern Raft Supplies and Orvis was finally happening. This trip showcases the wildness and beauty of the South Fork Flathead River and how important the wild and scenic river designation is for our nations rivers. It also brings a unique adventure for fans and inspiration for our youth and adults to explore and protect these wild places. My team for this trip included adventure photographer Jackson Berger and Casey Shedd with American Fish and Tackle Co.

Memories rushed through my mind while waking up to the sounds of horses snorting, the rustling of hooves and gates clanging together as the packers prepared for our 30 mile horseback ride into the Bob Marshall Wilderness. Since I was 12 these smells and this mornings soundtrack was normal for me so I was comfortable although I couldn't say the same for photographer Jackson Berger and friend Casey Shedd. As we made our way up the dust filled trail nose to tail, I could tell this would be a long trip. Partly because my furry friend happened to be the laziest one of the bunch and we breathed in more dirt than fresh air. Once we climbed 15 miles up the pass and reached the downward trek 15 miles toward the river I noticed the smoldering remnants of the wildfires in the distance. My attention was brought immediately back with the sound of a mule stumbling along the trail, which wouldn't be that big of a deal except for the 200+ drop off alongside the trail. After steep trails and smoldering grounds we finally made camp. The stars shined brighter than I've ever seen and as we roosted in our hammocks, an elk bugle filled the frozen night for a brief second. I lied there knowing how special this moment was and I just prayed the other guys felt the same. This is what I dream of, being in the wild, I'm in heaven.

It was a 30 mile trek to get to the river. | Photos: Jackson Berger

In the morning we were all a little slow getting up due to the previous days ride and from leaving the warmth of our Hammocks. The flames of the morning fire gave us all new life as it thawed out our frozen water bladders and us. After breaking down camp we made a 100 yard trek to the river. While we inflated our Boardworks Surf paddle boards we thought about what we were told in town, that the fish may have moved out already this time of year. So we packed our boards and shoved off and as we reached the first deep pool our minds were blown by the amount of fish swimming below us. Each pool we came to had over 100 cut throat with bull trout mixed in, it was crazy. As much as we wanted to stop and fish the water level was low and we had to push on to keep on schedule. I knew we were going to have low water but I didn't realize the amount of time we would waste from dragging over shallow braided areas. No matter how much you plan and prepare you always have to roll with the punches and adapt and overcome on every expedition.

Throughout the next three days it would be the same routine of dragging boards while stumbling along the rocky bottom. Everyday the back and foot pain that ran through our muscles was subsided by the stunning beauty that surrounded us. Luckily, every night we would also have amazing camp spots where we could fish in the evening and mornings before we left. Everyday was a new challenge. This wilderness and river was beautiful but you could tell if you didn't have your shit together it could take your life in a second. We would get to experience some close calls first hand as we made our way through the narrows and burned areas. 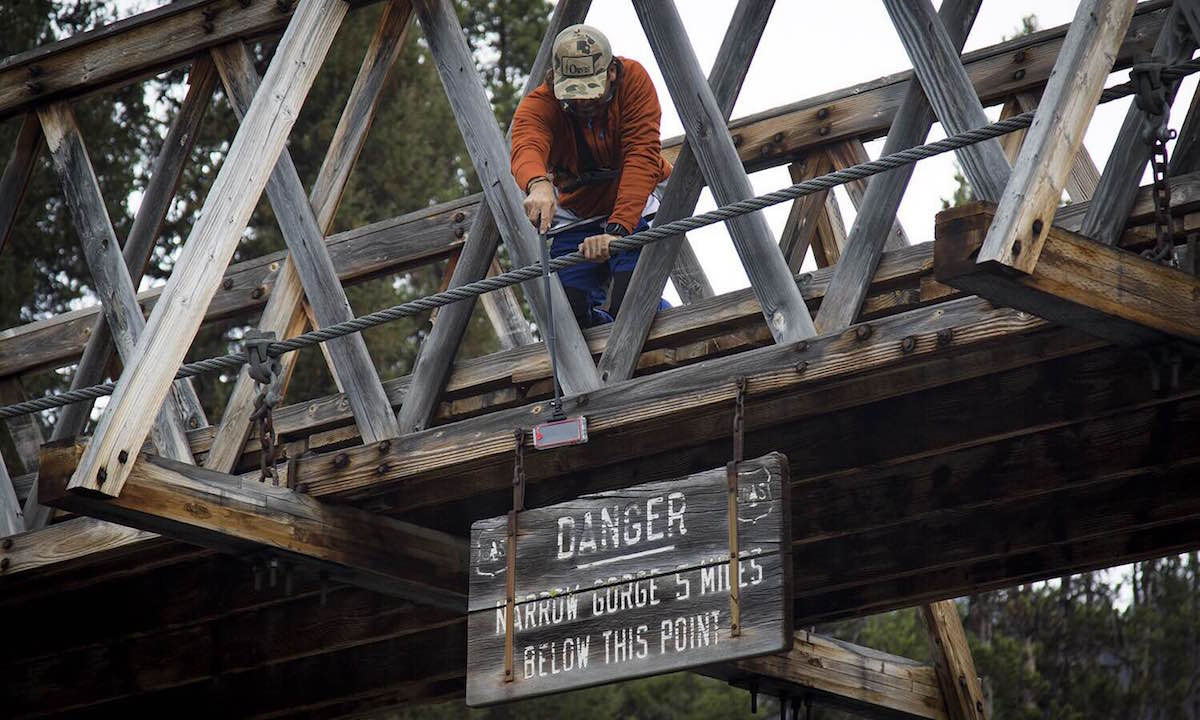 Approaching the middle section of the river the terrain changed, as the river banks steepened and the rapids roared louder with larger boulders sitting strategically in the center like a maze as the water rushed through. Signs on the pack bridge and cardboard boxes along the river bank warned us of the dangerous narrow gorge and wild fires ahead of us. No matter who you are this begins to play games with your mind making you second guess your decisions. The thing is, when you’re this deep in the wilderness you have to trust your training, abilities and be vigilant because turning back, calling someone or packing out is not an option. The wildfires that postponed our trip were still smoldering and the scorched mountain sides felt apocalyptic as we paddled through. This was a strong reminder of how powerful Mother Nature is, but also how important this cycle in life is as well. As we reached a narrow gap between two steep rock walls, I read a sign on top reading dangerous gorge take out here. This was the last warning sign you'll see once you cross this threshold and everyone immediately became a little more serious.

Paddling down, the walls closed tighter and up ahead I could hear a loud roar. Rounding a small turn I could see two sharp rocks sticking up between a small gap no wider than four feet, it was natures strainer making us realize how treacherous this gorge can be. After nine more portages, bruised knees and tired backs we finally reached the end of the gorge. We made it out with only one close call as one of the crew fell into the river after a portage with no vest on and an open dry suit. Luckily I was close enough to grab him. This was probably the longest and most brutal day I've had in a long time and I loved every second of it.

After the gorge the river returned back to the familiar waters from above and we were able to relax again. Smoke from smoldering fires filled the river bottom giving us a mystical feeling as we floated down. We had to be careful at choosing our camp sites now due to falling trees, which was brought to our attention one morning as a huge pine fell within 30 feet of our camp. Once we reached our final take out it was a mixture of emotions knowing we would be leaving the river the next day. For the past six days this river has been a mother to us — it nourished our bodies with food and hydration it cleansed our bodies of stench and soothed us to sleep at night. We sat at the waterline talking and laughing, reminiscing about the week doing everything we could not to leave. Before we left to make our last portage up to the airstrip, where the next day a bush plane would come in to fly us out, we decided to fire off one of the bear spray cans that we brought in case we had any encounter with bears. Jackson pulled the trigger and expecting a 30 foot stream of pepper spray, we only got four feet. It made us laugh knowing that would've just been seasoning for a charging bear.

The next morning we had high winds and low clouds which scared me a little, not knowing if the plane would fly in that day. All of a sudden out of the clouds we heard a faint whining of an engine, and then it appeared. It was a four seat Cessna that was probably the smallest plane I've seen. I was more nervous about this damn plane than I was of the bears. Once up off the ground it was absolutely breathtaking seeing the river and surrounding area from a totally different perspective. Flying over everything I thought about something Casey said earlier in the week. “People see these trips and they only see the pretty pictures and happy smiles, what they don't see is the brutal rocky miles, long days, and dangerous scenarios we go through” Casey said. I loved seeing the change in him and watching him grow in the outdoors. This is why I started this project to bring people closer to the outdoors, create awareness and share my passion for it. On this trip we saw the effects of natural disasters which is ok, it’s natural, but what wasn't was the trash we saw on a river that shouldn't have any.

On their way out the crew saw from above the river that they had just spent the past 7 days on. | Photos: Jackson Berger / Gabriel Gray

Panama City Beach, Florida - Gabriel Gray is a river SUP extraordinaire. Born and raised on a farm in North Florida, most of his teenage years were influenced by the Wassica River and the Gulf of Mexico; He developed an early passion and respect for Mother Nature and the ocean at an early age learning to survive off of the land around him. Once he found the sport of SUP he integrated his two passions which was super easy and started expedition paddling to help spread awareness for what he grew up loving as a kid, the outdoors and Mother Nature.

Website: www.grayoutdoors.com/ Email This email address is being protected from spambots. You need JavaScript enabled to view it.