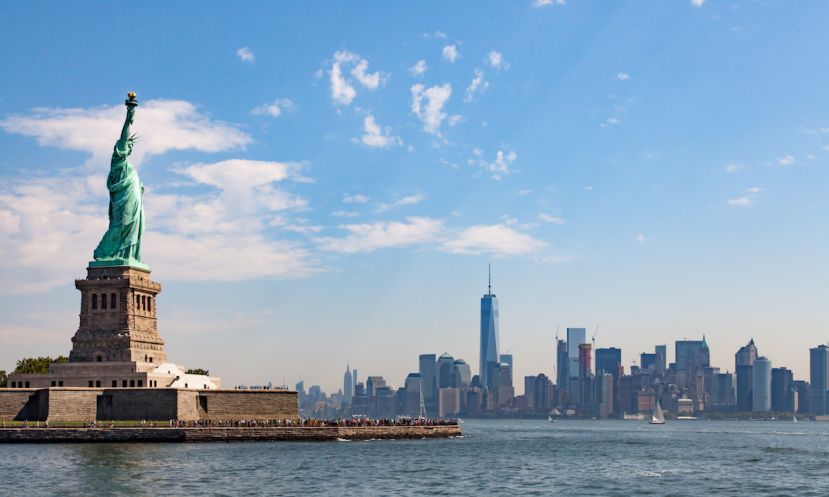 The Statue of Liberty in New York. | Photo courtesy: Shutterstock

SAN DIEGO, California - We often think of stand up paddle adventures as an opportunity to see some of nature's finest creations, but there are actually several famous man-made landmarks that are also accessible by SUP. To recognize a few of these artistic masterpieces, we've rounded up 7 of the most fascinating landmarks from around the world that can be seen from a paddle board.

7 Famous Landmarks To See On Your SUP 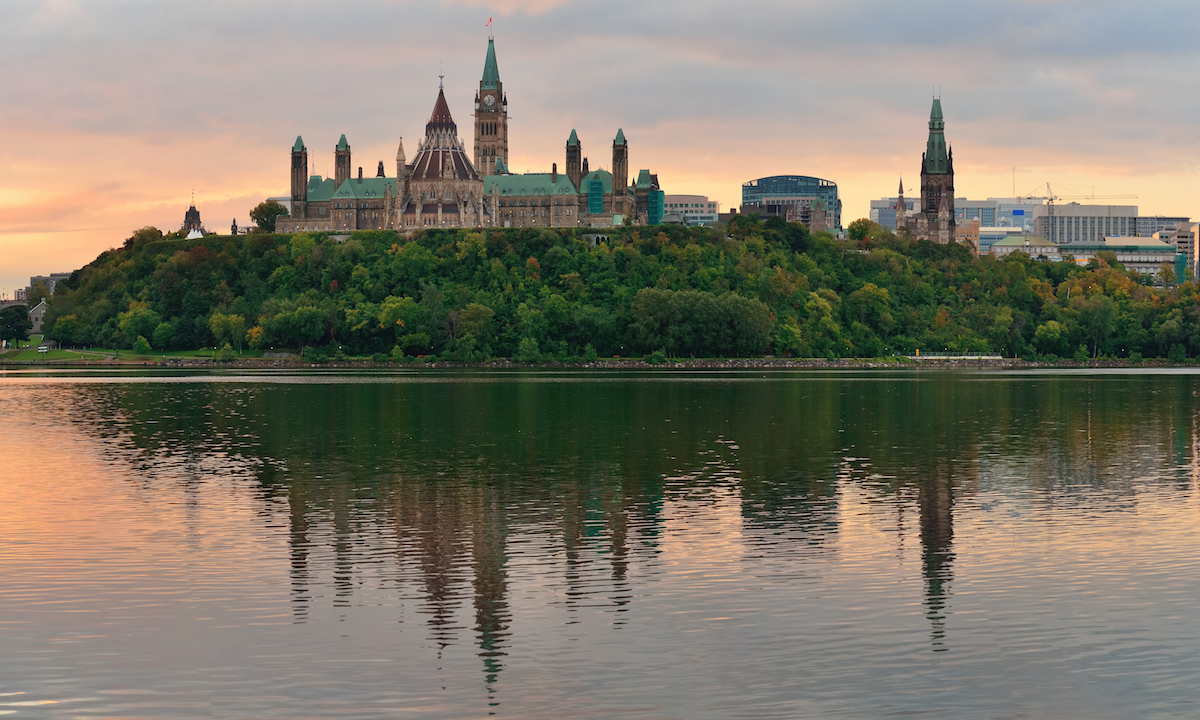 More commonly called "The Hill," this famous area lies on the southern banks of the Ottawa River in downtown Ottawa, Ontario, Canada. Perched atop The Hill is a group of Gothic revival style buildings that are home to the Parliament of Canada. A major tourist attraction in the area, The Hill brings in millions of visitors each year, many to see the iconic bell and clock tower that sits at the center, known as the Peace Tower. Luckily, sightseeing from the beautiful Ottawa River offers stunning views without the crowds. Stare in tranquility at the Peace Tower and embrace the surrounding lush greenery as you paddle on Canadian waters. 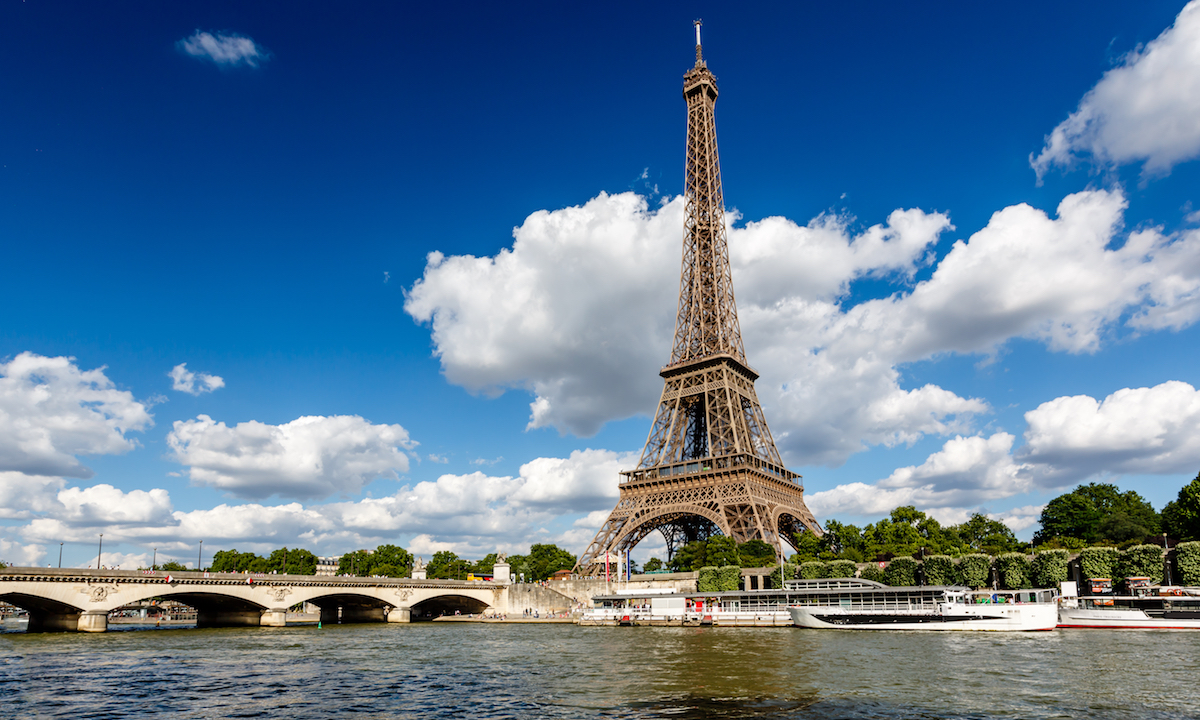 Paddle boarding with a side of Parisian sightseeing? Yes please. One of the most well-known landmarks that can be seen while paddle boarding is the Eiffel Tower. Rising at Source-Seine, the River Seine flows through Paris into the English Channel at Le Havre, and offers spectacular views of the French capital. The river passes just feet away from the Eiffel Tower, giving paddlers an incredible close-up view of one of the modern world's most historic structure. Access to this portion of the river is strictly limited throughout the year, so the best way to get these incredible views is during the annual Nautic SUP Paris Crossing in December. The event takes paddlers right through the heart of Paris on the River Seine and consistently attracts hundreds of participants each year. An experience unlike any other, the Paris Crossing is definitely one for the bucket list. 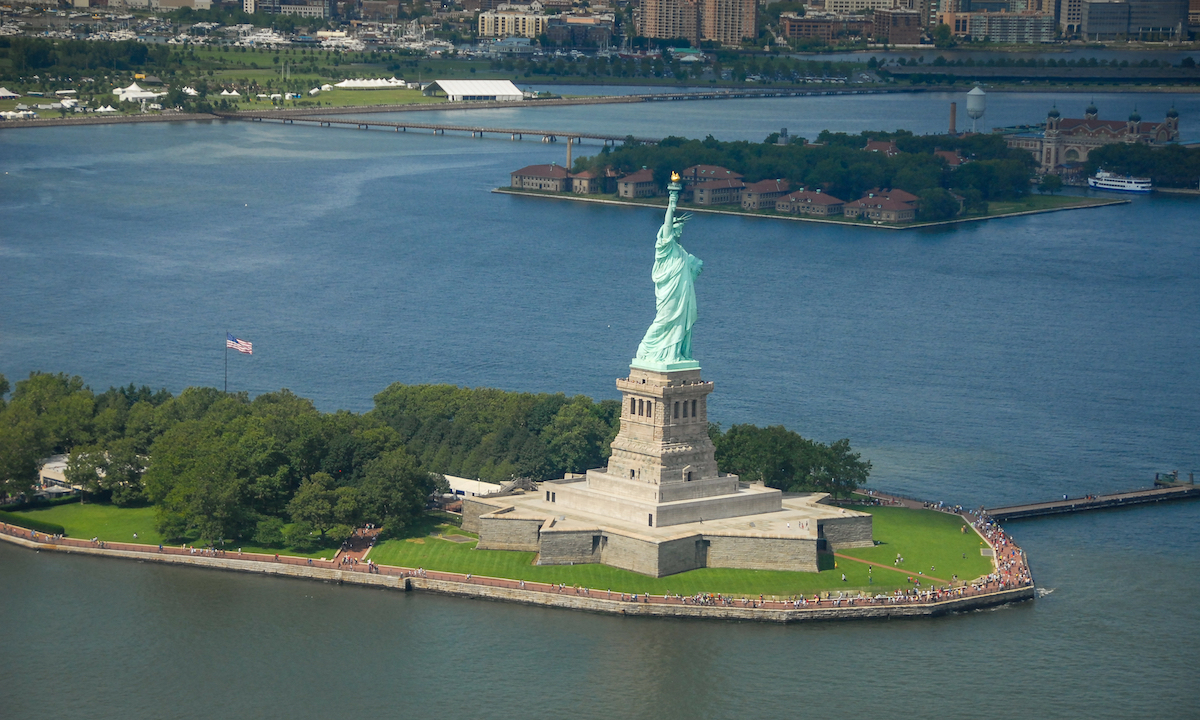 The Statue of Liberty in New York. | Photo courtesy: Shutterstock

Gifted to the United States by the people of France in the late 1800s, the Statue of Liberty in New York City stands as a symbol of freedom and independence. The copper statue soars overhead at approximately 150 feet, with an additional 155 feet making up the bottom pedestal. Situated in Upper New York Bay on Liberty Island, south of Ellis Island, there is truly no better way to see Lady Liberty in all of her glory than from the surrounding waters. Several local water sport guides offer tours around the statue as well as the other nearby islands. Plus, paddling on the Hudson not only means spectacular views of Lady Liberty, but also sweeping views of the New York City skyline. So step back, avoid the foot traffic, and enjoy this emblematic U.S. landmark from your paddle board. 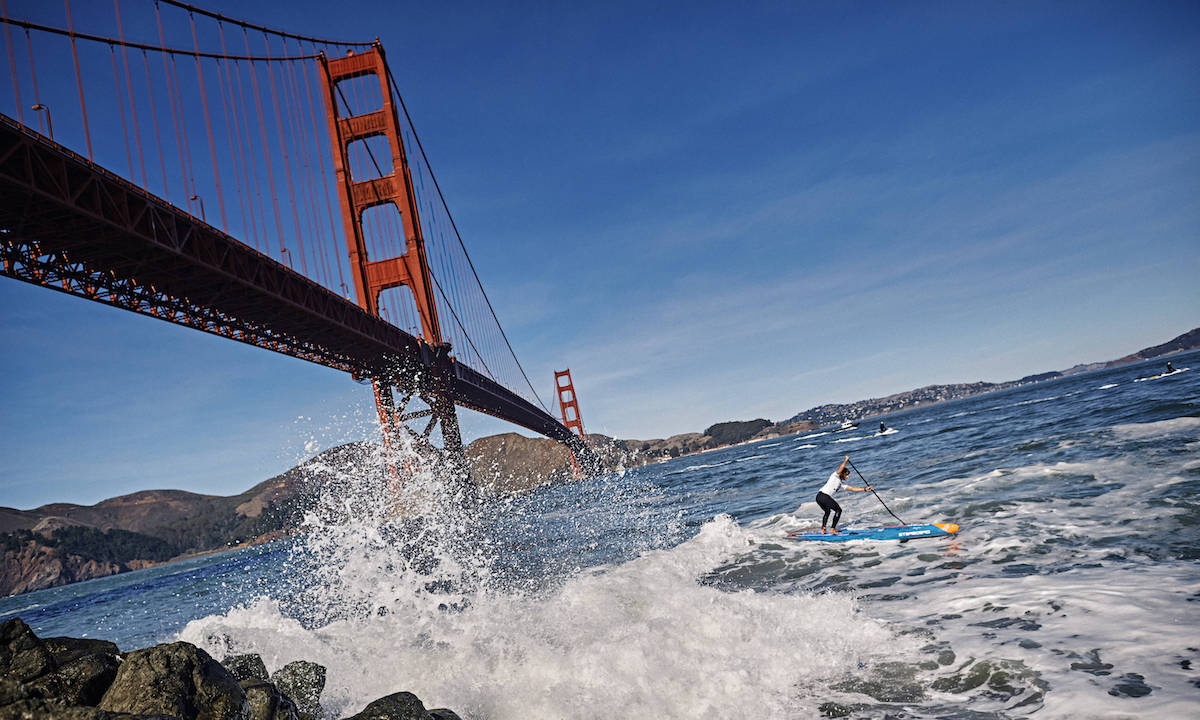 The Golden State's most culturally diverse city, San Francisco, is home to some of the United States' most popular tourist attractions, including the iconic Golden Gate Bridge. The historic bridge spans the 1 mile Golden Gate strait connecting San Francisco Bay and the Pacific Ocean. Picturesque but highly demanding, paddle boarding these waters provides awesome views of the Golden Gate Bridge, Alcatraz Island, and more, however exploring deep into the bay does require a certain level of skill or a local guide. One of the most prestigious events of the year, Red Bull Heavy Water, takes place at Ocean Beach in San Francisco, and there are several smaller events around the city throughout the year. So if you're looking to race in these waters, San Francisco has got you covered. 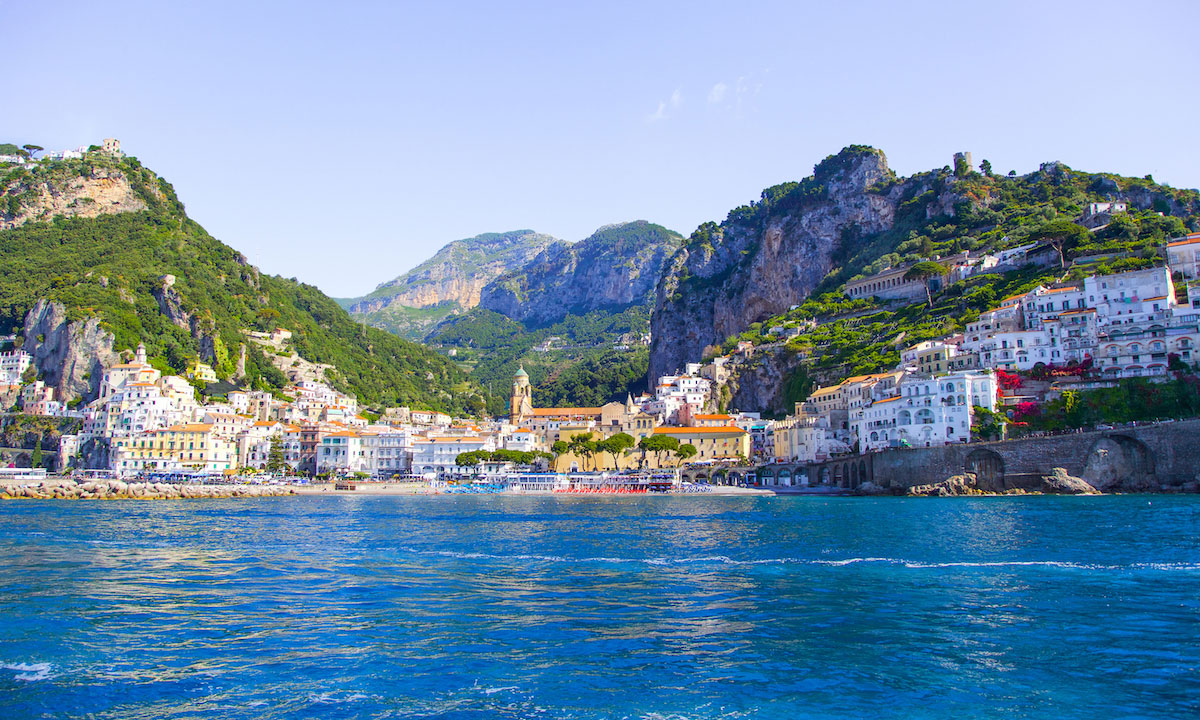 Debatably one of prettiest stretches of coastline in Europe, the Amalfi Coast on the southern edge of Italy's Sorrentine Peninsula is a stunning combination of cliffside verdure, pastel-colored architecture, grand villas, and charming vineyards. Navigating through the high mountains and vibrant woodland is an unforgettable experience in itself, but the best place to view the 'Divine Coast' is from the water. Paddle out just a few feet in these bright blue tranquil waters, turn around, and prepare to have your breath taken away. To explore deeper, connect with a local SUP shop or tour guide who can point you in the direction of hidden bays and secret spots along the coast. 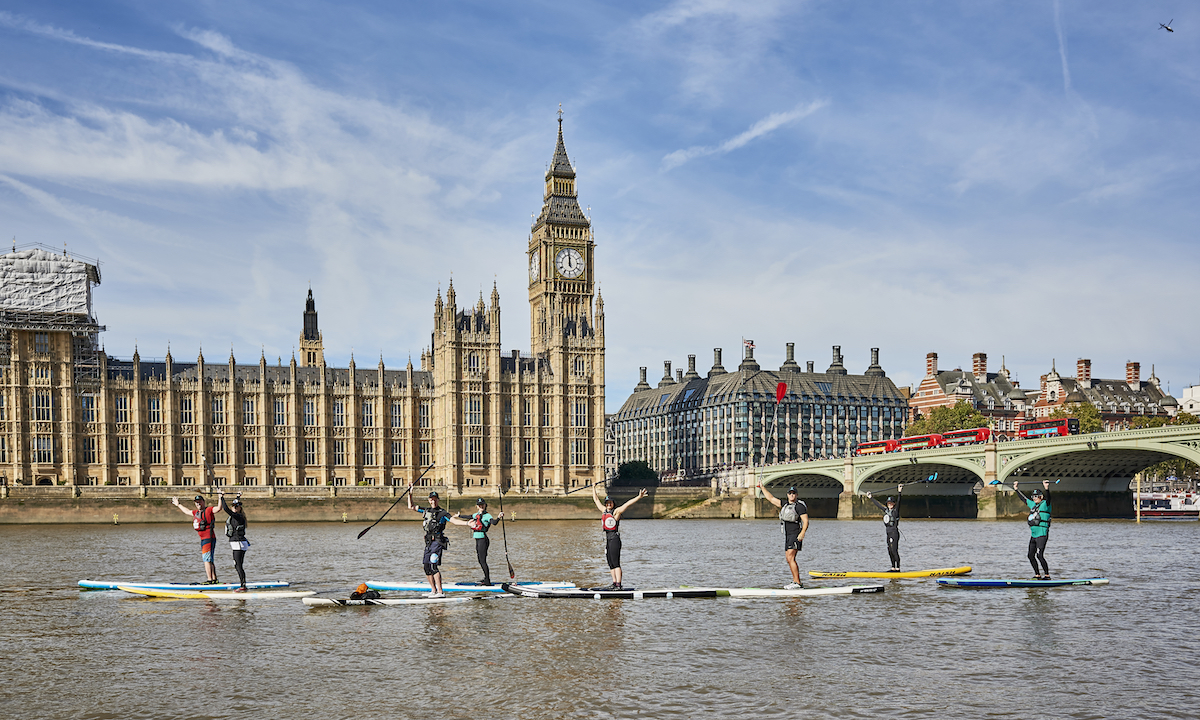 Built in the mid 1800s, London's iconic Big Ben clock tower is one of England’s most recognizable timepieces. As a whole, the U.K. often runs under the radar when it comes to stand up paddle destinations, however there is actually a large paddle boarding community and some amazing eye candy across the island nation. London is one of the most popular SUP spots, with the River Thames running right through the capital city. Paddling the River Thames provides close-up views Big Ben as well as other riverside attractions including the London Eye, the Tower of London, and more. 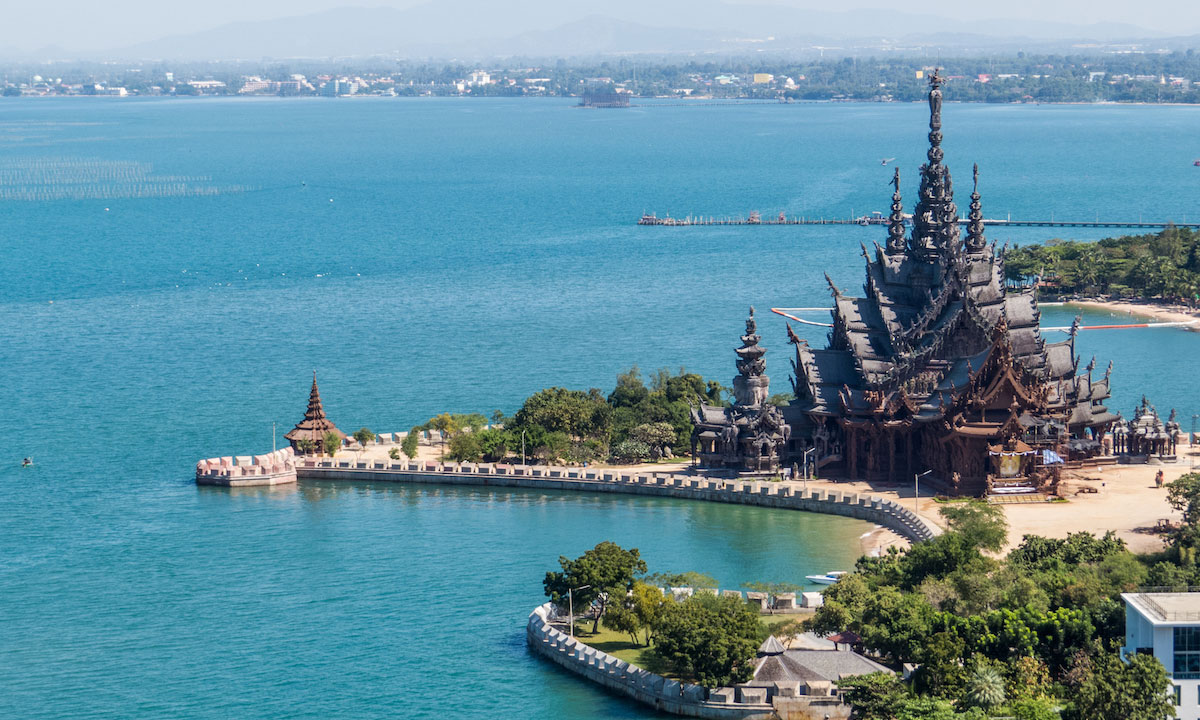 Sanctuary of Truth on the coast of Pattaya, Thailand. | Photo courtesy: Shutterstock

The Sanctuary of Truth is an all-wood religious structure located in Pattaya, Thailand, that is comprised of intricate wood carvings and detailed sculptures inspired by traditional Buddhist and Hindu beliefs. It’s situated along the coast of northwestern Pattaya, just feet from the shores of the Gulf of Thailand. Since the sanctuary is perched on a plot of land that juts out slightly from the remaining coastline, paddlers can almost fully circle the structure by riding along the area’s walls. The views from the water offer both a close look at the fine piece of artwork, as well as a broad landscape view of the sanctuary nestled within the greater coastal city of Pattaya.

And these are just a handful of the amazing monuments around the world that can be seen from a paddle board. Think we missed one? Comment below or tag us on Instagram to let us know! For more SUP travel destinations, click HERE.

More in this category: « Paddle Boarding British Columbia, Canada Get Exotic on Your Next SUP Adventure: 3 Must-Visit Destinations »