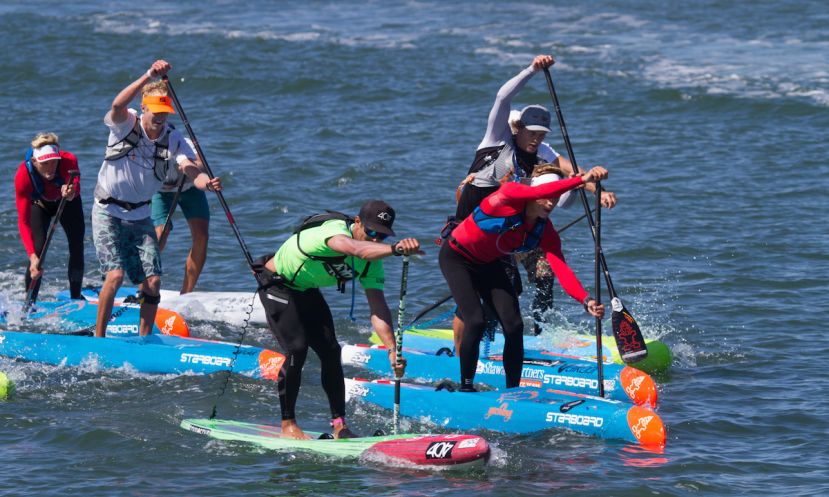 WRIGHTSVILLE BEACH, North Carolina - After another grueling year yet again on the Graveyard course at the Quiksilver Waterman Carolina Cup new champions were crowned among a record field of elite competitors in an exciting race that didn’t disappoint. For the first time since 2014 the direction of the course was reversed (clockwise around Wrightsville “island”) to take full advantage of the wind and tides. Conditions during the race varied from a strong ocean downwinder to calm flat water making it an exciting and fun race to watch as well as be a part of.

For the men the race quickly heated up with Boardworks’ Mo Freitas breaking free in the one mile ocean “sprint” to the inlet entrance, however he was closely matched by NSP’s Titouan Puyo and Travis Grant, Connor Baxter, Lincoln Dews and Danny Ching. Not far behind was Michael Booth and Georges Cronsteadt who were able to quickly drag the second group back together to create a front pack of 17 guys that stuck together for the first 10 of 13 miles.

Although stakes for the race were high the pace was mellow in the long, flat back straight of the intercoastal waterway, with several of the contenders chatting and many top guys commenting post-race about how fun it was “It was like a Sunday morning training session for a couple of miles there,” noted Travis Grant. The pace then soon picked up as the leaders neared the end of the flat stretch with the field totally scattered in the final three mile ocean leg when those who were just hanging on quickly dropped away.

Once the men hit the open ocean leg Michael Booth made his move and held off the traditional ocean masters and previous Carolina Cup champs Travis Grant and Titouan Puyo in a three mile downwind leg home to record a well-deserved victory and prove he’s an all-round all-star athlete. This win for Booth is quite the redemption after his capitulation in Tahiti two weeks ago at the Air France Paddle Festival and a disappointing Carolina Cup 12 months ago. “This is definitely my biggest win yet” said Booth.

Following Michael Booth it was Travis Grant and Mo Freitas who gave us one of the most exciting finishes we’ve ever seen. Grant and Freitas closed the gap to a few meters in the final, and it was a frantic 250 meter sprint from the final marker buoy to the beach finish where Grant was able to edge out Freitas by six one hundredths of a second. What a nail biter that was!

In a sign of how competitive the field was, several big names surprisingly dropped off the pace. Number one seed Connor Baxter (Starboard) finished outside the top 15 in a race that has become his achilles heel. Following the finish of the race many paddlers simply described the race as “fun” given the downwind conditions and relatively calm racing in the flat stretches. “It was so much fun! Good downwind and mellow flat water,” said two-time Carolina Cup champion, Titouan Puyo. Following his win here at the Carolina Cup Michael Booth now holds the ratings lead on The Paddle League World Rankings. 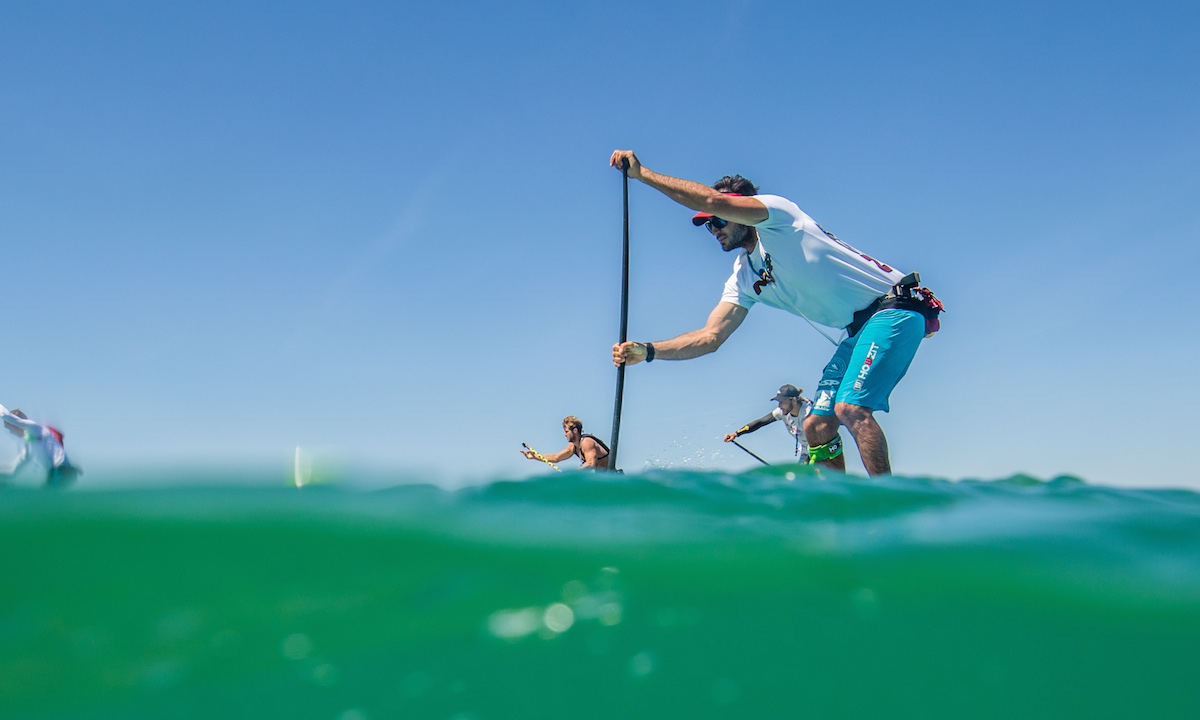 Without the number one seed and five time champ Annabel Anderson out of the race this year due to an injury a fresh winner was guaranteed for 2018 and the ladies showed up in full force for their shot to take the crown. In arguably the most competitive women’s field ever assembled at the Carolina Cup it was German powerhouse Sonni Honschied that came and conquered.

Sonni stepped up and dominated from start to finish, catching early leader and Starboard teammate Fiona Wylde then breaking away at the five mile mark and never looking back. Honscheid looked equally comfortable in the flatwater and downwind portion of the race showing just how truly well rounded of a paddler she is. Although Sonni Honscheid held a massive lead over her fellow competitors Fiona Wylde gave it her best shot to chase her down but was eventually caught by the pack and was overtaken by Olivia Piana in the second half. Wylde surfed the bumps home for third place and was all smiles as usual post-race. “I’ve never had so much fun in Carolina,” said Wylde. 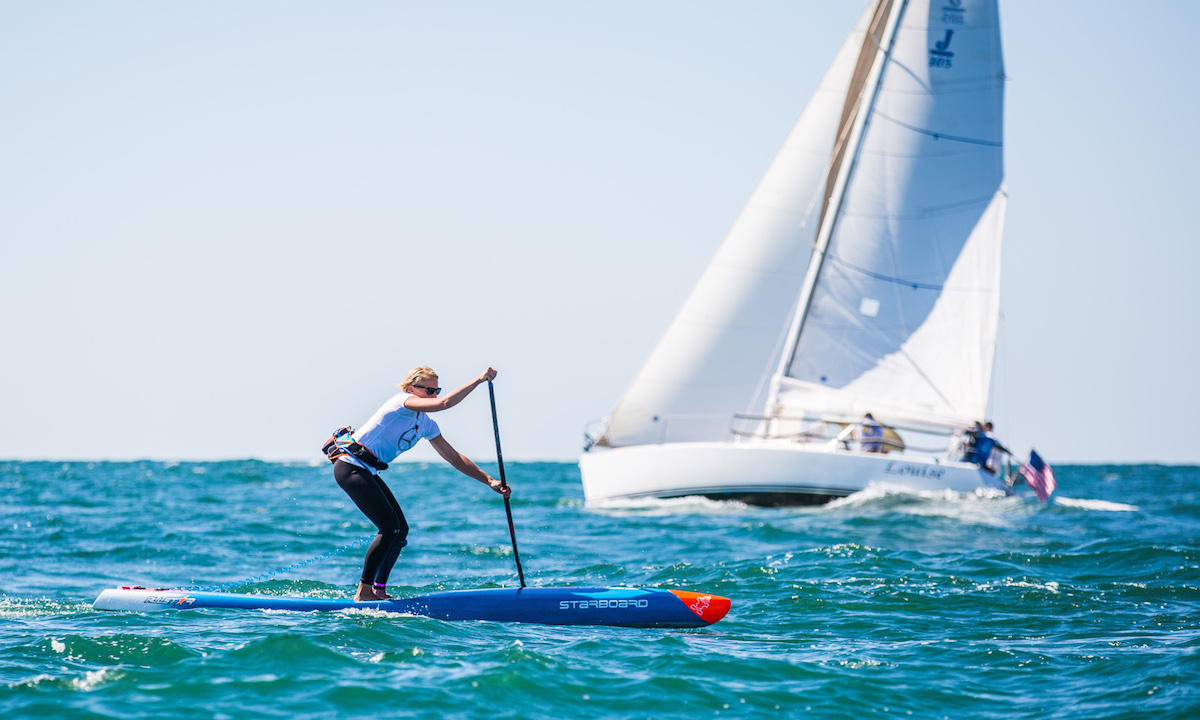 Hometown hero April Zilg received biggest cheers of the day after crossing an impressive fourth and was followed by SIC Maui’s Seychelle Webster who made a great comeback in the ocean to finish 5th.

In a truly international field with the top 10 women hailing from six different nations (similar story in the men’s race: 7 different nations in top 10) the women’s elite field continues to strengthen and show promise. With this win followed by her win at the Air France Paddle Festival in Tahiti two weeks ago Sonni now sits atop the ratings leaderboard looking strong for the rest of the season and will be very hard to stop in the hunt for the world title.

In another hugely successful year for the Carolina Cup 500 paddlers have hit the water in Saturday’s races between the beginners, weekend warriors and the elite. That number is expected to hit 700 by Sunday afternoon with more weekend activities yet to come. 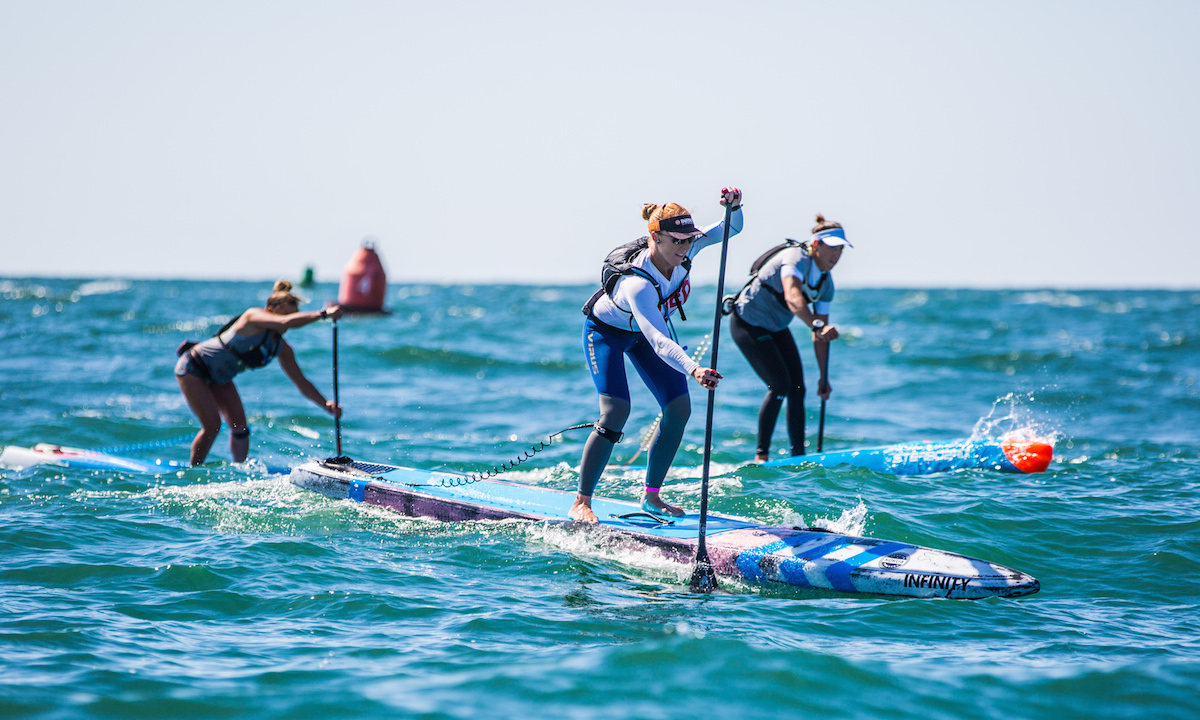 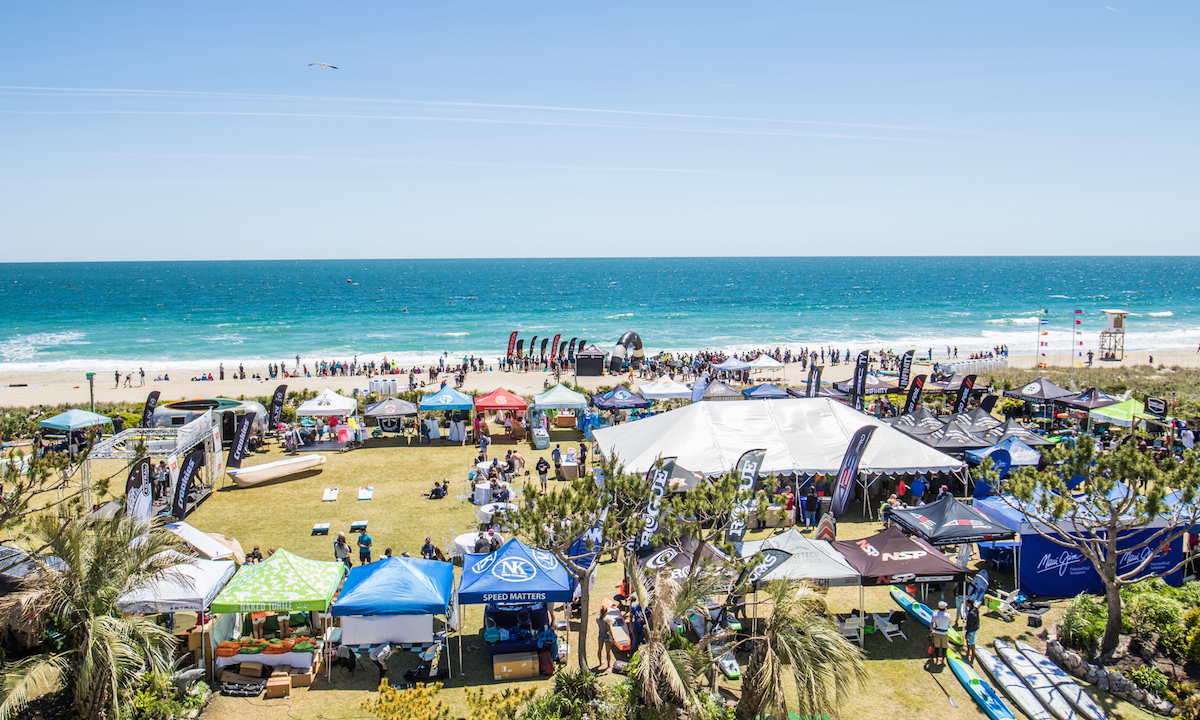