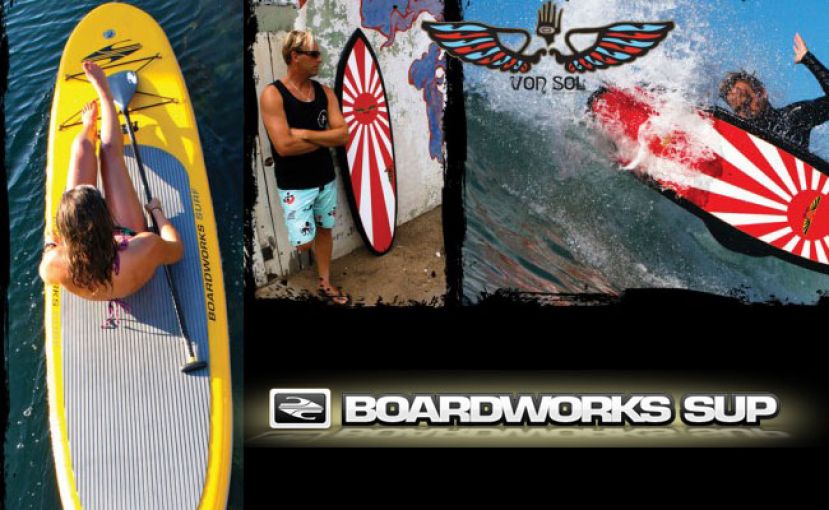 Boardworks is giving away free boards at their booth during the Surf Expo in Orlando, Florida, on Thursday and Friday at 5pm. Visit Boardworks Surf to learn more about the paddle and surfboards being given away.

Boardworks SHUBU, inflatable paddleboard,(left) and Von Sol Shadow (top) will be given away at Surf Expo.

ENCINITAS, California – Boardworks Surf is giving away a FREE board on Thursday and Friday of the Surf Expo in Orlando, Florida. For a chance to win simply stop by the Boardworks booth #1777 and drop your business card. Drawing will begin at 5pm and you must be present to win.

On Thursday, a Von Sol Shadow is up for grabs. Designed by US Surf Team former co-captain and style master Sean Mattison, this board is known for its high-performance in multiple surfing conditions. Combining retro and modern features, it drives incredible speed down the line while also offering plenty of traction and maneuverability.

On Friday, a SHUBU, Boardworks’ show up and blow up inflatable board, is the prize of the day. As one of the most popular creations of the stand up paddle world, the SHUBU has been featured on a myriad of waterways, from whitewater contests on the Weber River in Utah, to surf sessions in California, and beyond. This board has been the source of fun on nearly every type of water available.

More in this category: « Will HanoHano Continue to See SUP Growth in 2013? World Series Finals To Air Sunday »