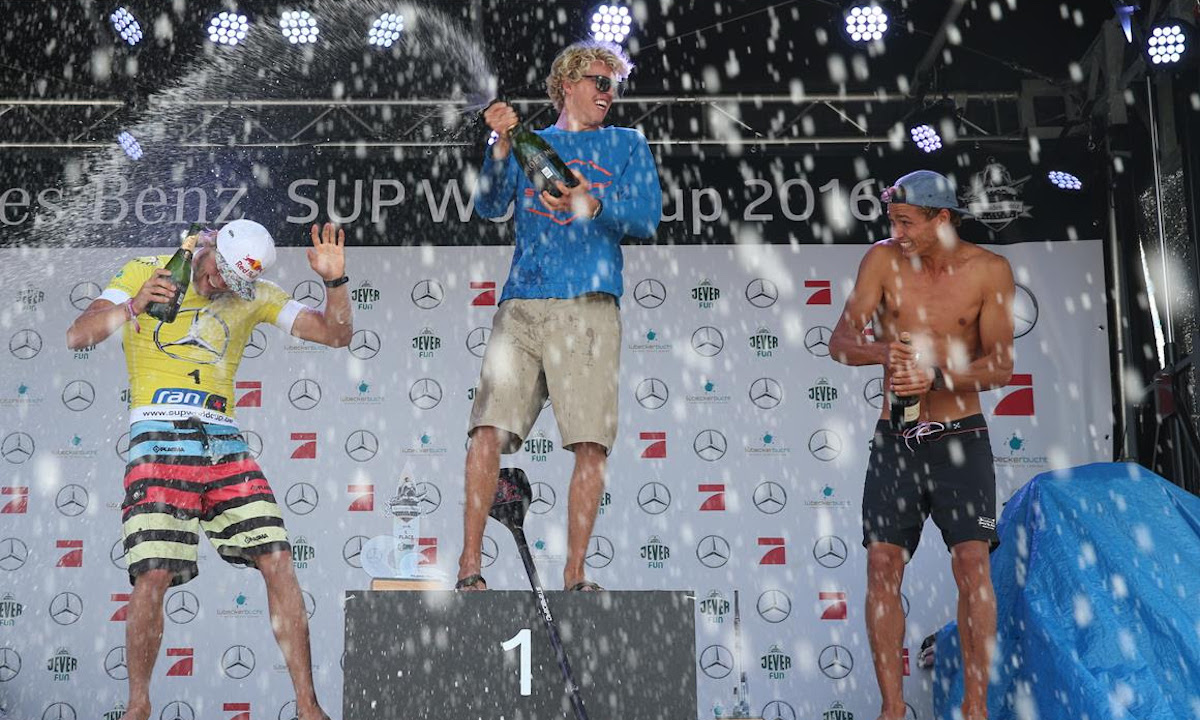 SCHARBEUTZ, Germany - Stop #4 of the 2017 APP World Tour is quickly approaching and excitement is building as the action moves on from Japan and over to Europe for the Mercedes-Benz SUP World Cup in the beautiful seaside town of Scharbeutz, Germany.

With action to kick off as early as the 30th of June with Media and promotional racing and special events, leading to the main event on Saturday, featuring the World Tour Sprint Racing Elimination as well as World Qualifier Series Racing. This is then capped off on Sunday with World Tour & Qualifier Series Long Distance Racing as well as Amateur and other divisions for a complete weekend of action on the water in Scharbeutz.

To compliment the action on the water, a full weekend of social activities, live music and entertainment, making Scharbeutz the place to be from the 30th June - 2nd July for Stop #4 of the 2017 APP World Tour.

The coveted yellow jersey is being shared for the first time in history here in Germany, as fellow Hawaii-born athletes Mo Freitas and Connor Baxter come into Stop #4 of the 2017 APP World Tour tied for first place. After two epic stops of racing in Maui and Japan, the two have posted exactly the same results, with the event win going to Mo in Maui through the weighting being on the sprints, while the win in Japan went to Connor, with the weighting favoring the distance race. 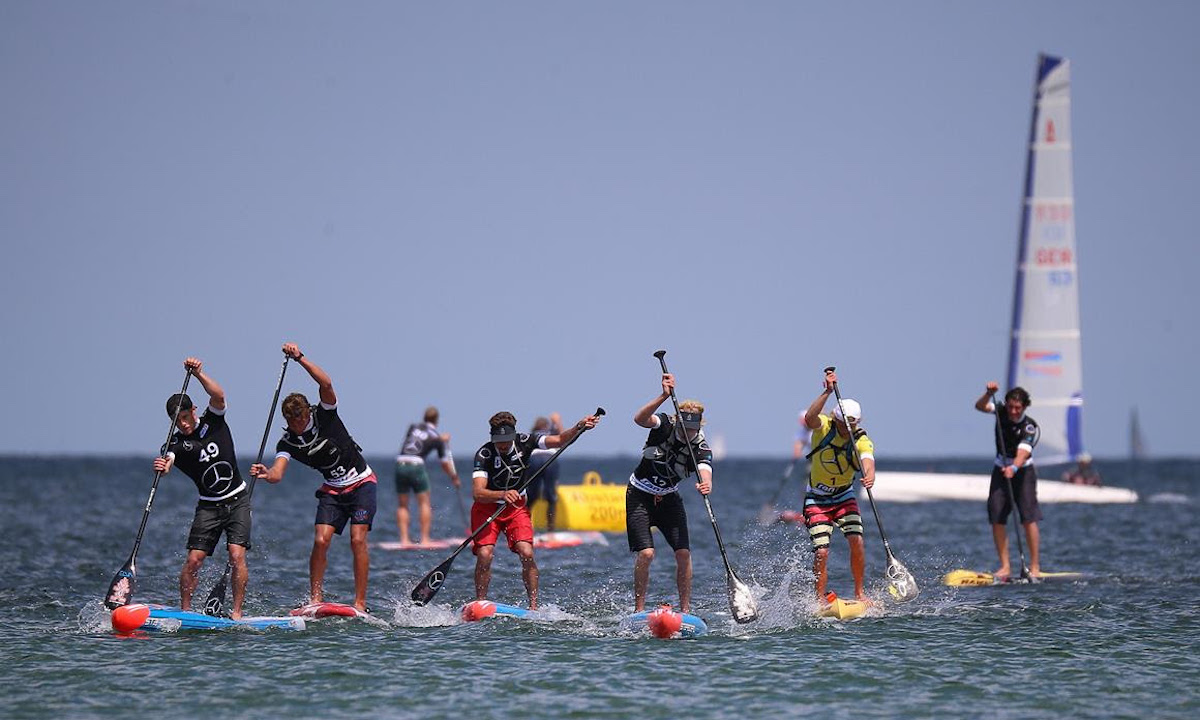 Whatever happens, the tie will be broken in Germany and there will be just one athlete wearing the yellow jersey going into the North American leg of the Tour this year, not to mention the prospect of the athletes that are right on their heels and ready to strike in Germany. It will without doubt be a pivotal stop on the 2017 World Tour as the World's best step up to be counted, and to come out on top.

While the leaders are established in the Men's fleet, it is still extremely early in the season to make any real calls. There is no doubt that Connor Baxter and Mo Freitas have both had phenomenal starts to the year, but right behind them is the Vice World Champion from 2016 and one of, if not the fastest sprinter in the world, Casper Steinfath (Naish) from Denmark.

Casper was able to hold onto the yellow jersey last year in Germany, so historically it is a good event for him and close to home, as he will be looking to improve on his position at this year's high profile European stop. However, right behind Casper is a whole host of talent that are all preparing for their moment to shine this year, posting consistently strong performances and within inches of results that will put them firmly in the Title Race in 2017:

Clearly the talent continues to run deep, from Travis Grant, Kenny Kaneko and Toby Cracknell, to Leonard Nika, Martin Vitry and Slater Trout, the field is stacked and the competition promises to be fierce at Stop #4 of the 2017 APP World Tour.

Meanwhile in the women's division, Terrene Black from Australia has been holding her own over the first 2 racing stops of the season, coming into Germany with confidence and a solid start to the season under her belt. However, right at her heels are the local favorite in Germany who has proved herself one of the very best distance paddlers in the World, Sonni Honscheid, and right behind her, the allrounder and 2016 World Champion Fiona Wylde (Werner Paddles) from Oregon, USA.

They are all very much within striking distance, with Fiona a mere 500 points behind Sonni and then just a few thousand points from Terrene. A big result from either of these two contenders could change everything, so it is all to play for here at the 2017 Mercedes-Benz SUP World Cup in Germany.

Behind the Top 3 though are an A-list of World Class talent that will be looking for their moment to shine in Germany. In particular, 2015 World Champion Candice Appleby, who as had a slower start to the season than she would have wanted, is clearly as much of a contender now as she has always been and will be looking for redemption at this all important European stop on the 2017 APP World Tour. 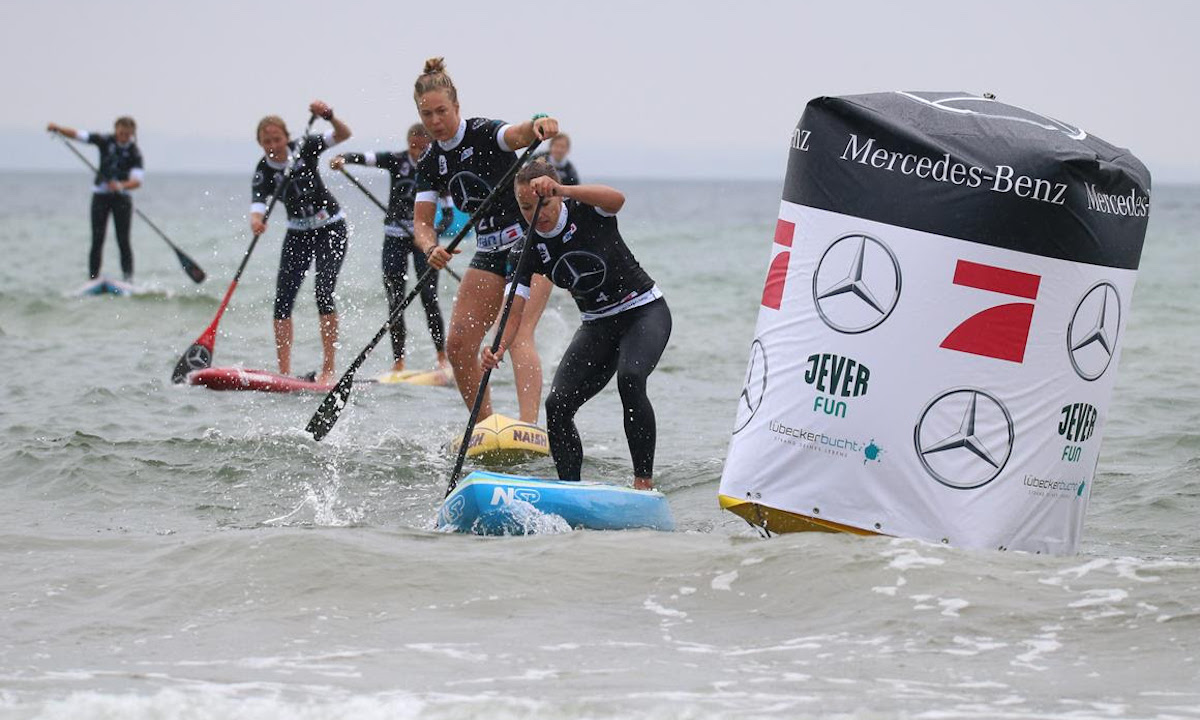 Ladies battle it out on the course at 2016's event. | Photo courtesy: APP World Tour

Behind Candice, we have a wealth of younger talent looking to breakthrough such as Chloe Walkerdene from Australia and Yuka Sato from Japan, but also more experienced contenders such as Angie Jackson who will be looking to come right back into contention after a lackluster start than she would have liked in Japan.

We will also need to watch out for the European talent that will be joining the fray in Germany, such as the ever impressive Olivia Piana from France, Susak Molinero from Spain, local favorite, Noelani Sach from Germany and Amandine Chazot from France to mention just a few.

Stay tuned for the build up to the Mercedes-Benz SUP World Cup in Scharbeutz, Germany from the 30th June - 2nd July across social media channels #appworldtour and at appworldtour.com

The APP World Tour is proud to have Hawaiian Airlines as its Official Airline for the 2017 Season, connecting the World with Hawaii via its N. American, Asian and Australian routes. The APP World Tour produces a complete inventory of programming, including live and post produced broadcasts from all its events, with distribution to over 100 countries worldwide via premier global networks such as CBS Sports and Fox Sports Australia, supported by IMG Media.